Seal Meat: Veal of the Ocean?

Todd Perrin, chef at one of Newfoundland's best locavore restaurants, thinks you should try seal. 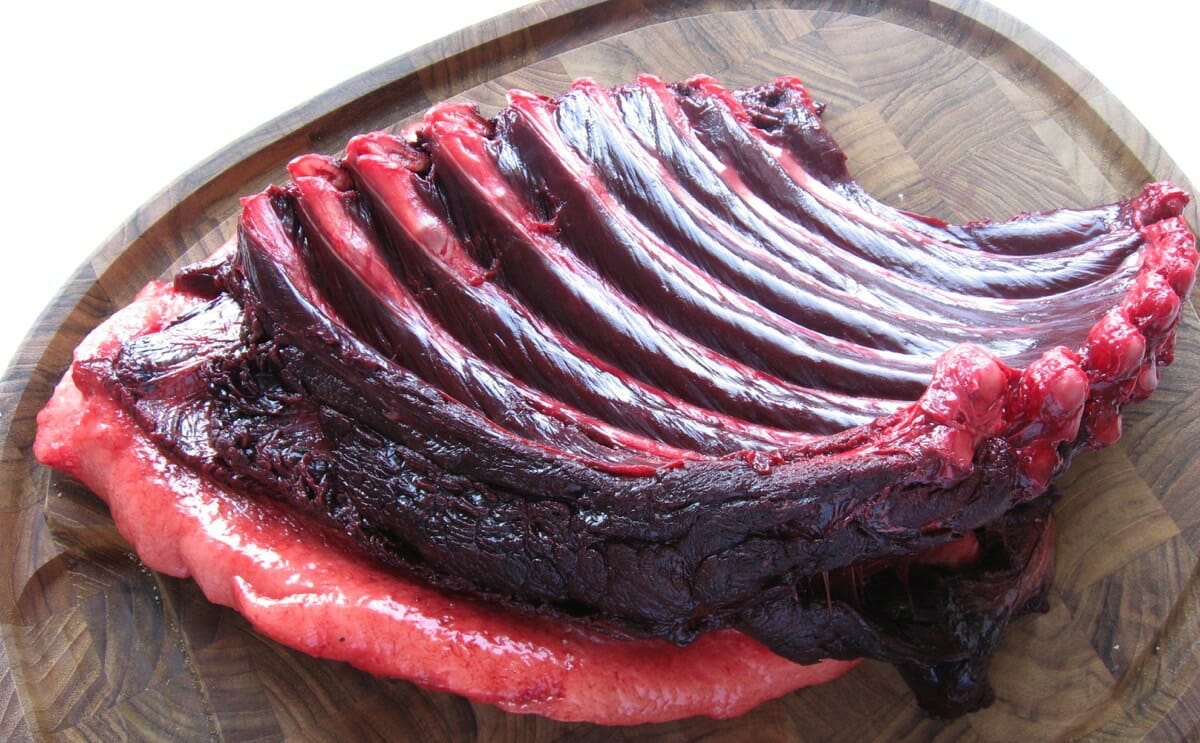 “The meat is pretty much not like much else you’ve ever eaten,” says Perrin, chef/owner of The Mallard Cottage, a restaurant on the forefront of the new Newfoundland cuisine. “It has that kinda gamey, iron-y, almost kind of organ meat flavor. But when it’s fresh, it has a little taste of the sea. It’s super lean, but oily, it’s really a paradoxical kind of flesh.” He’s talking about seal, specifically harp seal, an ingredient that the Perrin and a few other chefs across eastern Canada have been looking to in recent years, while at the same time, organizations like PETA and the Humane Society have ramped up their anti-sealing efforts and Russia, the U.S., Taiwan and the EU upheld their ban on seal products or imports.

Mostly, the animal rights community and the progressive food community are on the same team, but sometimes their Venn diagram circles smash into each other instead. Seal meat is a perfect example: To the Humane Society, it’s a ridiculously cruel and outdated slaughter of cute and intelligent animals, but to Perrin, it’s a sustainable, indigenous product that’s an important part of his culture and also pretty damn delicious.

In his first episode he cooked seal flipper. In a later challenge, which had the chefs making their own version of a poutine, he used minced moose-meat.

Perrin grew up just outside St. John’s, the capital of and largest city in the province. It can be hard to explain just how separate and remote Newfoundland is from the rest of Canada; imagine if Alaska was as far away from the continental United States as it is, but that it had the oldest city in the country and so retained a centuries-old tradition that only grudgingly and with difficulty absorbs culture from the rest of the country. St. John’s is the most easterly city in North America, far to the north and east of Maine, historically a cod fishery village that looks like it still might be an outpost of the Portuguese empire.

Perrin speaks with, by Newfoundland standards, a relatively mild accent, but I doubt most Americans would even pick it out as Canadian; it’s more like some kind of mutant back-country Irish accent. This is all to say that Newfoundland is just barely Canadian, and its traditions are very much its own. In the past decade or so, the explosion in interest in food traditions and regional cuisine has hit everywhere from Denmark to Brazil to Australia, but Newfoundland is just now realizing that its food history, a product of living in a difficult environment for centuries, is something to cherish and preserve. Perrin is on the forefront of that. He appeared in the first season of Top Chef Canada, bringing special ingredients from home that even the judges, Canadian food luminaries that they are, didn’t recognize. In his first episode he cooked seal flipper. In a later challenge, which had the chefs making their own version of poutine, he used minced moose-meat.

“Springtime, usually around Easter, seal flipper was just something we ate,” says Perrin. “It’s not an everyday kind of thing, almost a special occasion that time of year.” The most traditional way to eat seal in St. John’s (really, the only way most people eat it) is in a pie, much like, says Perrin, a steak-and-kidney pie: minced seal flipper, root vegetables, and a rich gravy, baked in a pastry crust. But he’s now working to expand what can be done with the meat. “Last year we had a couple chefs down from Montreal and other parts of Canada and we did a seven-course menu of seal, all done differently, including dessert,” he says. (The dessert was a seal oil ice cream; “to be honest it was a bit of an experiment and wasn’t the best thing ever,” says Perrin.)

Seal isn’t like most meats. Pretty much all the seal Perrin works with is very young harp seals, though not, he was careful to say, “whitecoats,” the term for infant seals that have yet to lose their white baby fur. It’s been illegal to hunt whitecoats in Canada since 1987, but the seals hunted are still typically the young, which Perrin calls “the veal of the sea.” It’s the same basic idea as using lamb or suckling pig: before the animal really starts to move around, it has little muscle tone and a lot of fat, which makes it enviable from a culinary point of view.

The meat itself is bizarre. It’s deep and dark like duck or venison, but the animal has developed a totally different way of storing fat, due to its life in the cold North Atlantic. It doesn’t have marbling; instead, the fat is liquid, like oil, and permeates all of the meat. “When you handle seal meat it’s almost like a lanolin kind of feeling, your hands get so soft,” says Perrin. But that oil is also one reason seal hasn’t caught on away from the coasts where it’s caught: like many oils (walnut and flax come to mind), seal oil goes bad incredibly quickly; there’s no good way to preserve it. That’s why the native seal-hunting peoples of Canada tend to eat it raw; it’s not for religious purposes, it’s simply because seal meat has a very short lifespan and is best when freshest.

Perrin, and a few other chefs in Newfoundland and elsewhere, are branching out from the typical uses for seal. The major edible parts, he says, are the flippers (which became the most-used part amongst Newfoundlanders because seal pelt-hunters were given the easily-transportable flippers as part of their pay), the loin, and a few of the internal organs. “The flippers, you can kind of treat ’em like pork shoulder, they like long and slow cooking,” says Perrin. (On Top Chef Canada, the judges remarked that his braised seal flipper tasted a lot like pulled pork.) “The loins, kind of treat ’em like tenderloin or lamb loin. You can do a tartare or carpaccio, or roast ’em and serve ’em rare or medium rare.”

The dessert was a seal oil ice cream; “to be honest it was a bit of an experiment and wasn’t the best thing ever,” says Perrin.

The key, for Perrin, is that he really likes seal. “We don’t do it as a gimmick; if it wasn’t a good viable product that I thought my customers would enjoy, we wouldn’t be selling it,” he says. “We’re doing it for culinary reasons, and it also just so happens to speak to our culture and speak to Newfoundland.” It’s not dissimilar from what chefs in Northern Europe, like Rene Redzepi at Noma and Magnus Nilsson at FÁ¤viken, are doing: these are the flavors and aromas and ingredients of Perrin’s youth in a place he loves and still lives, but interpreted through the mind of a talented and innovative chef.

The objections over the seal hunt are a little confusing, largely because the market for seal fur is much larger than the market for seal meat. PETA even says, “Hunters toss dead and dying seals into heaps and leave their carcasses to rot on the ice floes because there is no market for seal meat.” This is a very controversial issue in Canada, with few outright facts to hold onto, but the controversy is largely about hunting seals for their pelt, not for their meat. For Perrin, that can be addressed by making seal meat more popular; to him, using the entire body of the animal is less wasteful and more respectful. He uses the heart, liver, and kidneys of the seal, he makes his aprons out of the skins, and even the chairs in his restaurant are made of seal-leather.

Further, Perrin thinks of the actions of the Humane Society and PETA as a little bit craven; to him, this is a non-endangered, very common local product, one that’s unique to his region and that he really likes to work with. “It’s like anything,” says Perrin. “If you shine a spotlight on someone killing cows, or pigs, it’s distasteful for a lot of people. In a PR campaign, what are you going to use? A cow, or a seal pup with big dark eyes looking back at you?” Perrin sees seal as a superficial campaign issue for animal rights groups, a way to use cute pictures to secure more money, when he’s just trying to cook his food in a respectful way.

His attitude seems to be catching on. More and more people are taking notice of Newfoundland cuisine; Serious Eats recently published a piece calling Newfoundland “your next culinary travel destination.” Even in Newfoundland, the locals are taking more of an interest in their cuisine, including seal meat. “There are a lot of people who, maybe five or ten years ago weren’t seeking it out, but now they’re seeking it out, they’re looking for it, asking for it,” says Perrin. Might the next hot new restaurant in Brooklyn or San Francisco or Chicago serve a braised seal flipper? It certainly seems possible.

I would like to see seal as a food fishery so bring on the recipes.

Fantastic meal,I bought 40 flippers last spring and cooked the last one on Sunday.I also cook the ribs.Place in a roaster with onion pepper and salt.Use worchestire sauce for the flavour.Place a slice of fat back port on top to keep it moist.I also cook it in red wine,must cook for three hours keep adding water tgen the juice from Tge cooked vegetables will make the gravy,somethingyou would die for.