From Fish to Flowers

Alaska's new gold rush stems from beautiful peony flowers -- ones that people will delay weddings over. 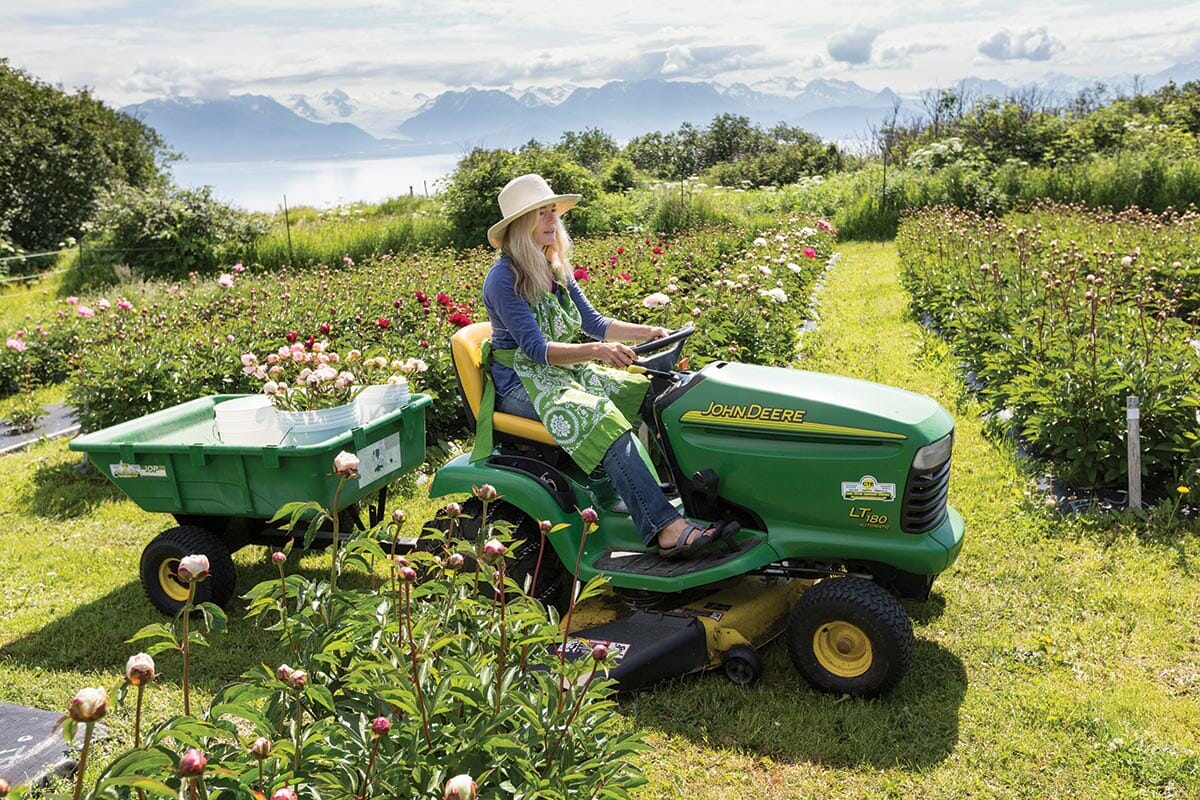 At the Chilly Root Farms in Homer, AK, the snow- covered Kenai Mountains form a backdrop to the peony fields.

The promise of gold, oil and king crab has lured fortune seekers to Alaska for decades. But Alaska’s newest profit-making industry stems from a most unusual source: flowers. Specifically, peonies – the kind that people will delay weddings over.

To date, over 100,000 roots have been planted in the state, and because peonies take years to mature, the industry is poised for steep growth. The projected harvest in 2017 is over 1 million stems, which could bring in somewhere between $4 to $5 million in sales. Still, this is a drop in the bucket compared to worldwide peony sales – Holland alone can sell over 30 million stems in a single month. But the northernmost state in the U.S. has one advantage over all other markets.

Alaska, it turns out, is one of the few places on Earth where peonies bloom in July.

“I got excited at this opportunity,” says Michelle LaFriniere of Chilly Root Peony Farm in Homer, Alaska. “We make compost with fish waste and seaweed. Our peonies are pampered princesses.”

The still-nascent peony boom was born in the late 1990s when a woman named Pat Holloway, director of the Georgeson Botanical Garden and professor at the University of Alaska, Fairbanks, gave a talk in Alaska about flowers. It was there that she learned about the seasonal anomaly from an audience member. (Holloway already knew that peonies require a winter hibernation.) They also don’t lend themselves well to container culture, which means that those big flower growers in Ecuador, Colombia and other tropical locales have a hard time growing peonies out of season. Add the fact that peonies can grow in temperatures of 60 degrees below zero with deep, insulating snowcover and Holloway had her eureka moment: Alaska could produce fresh-cut peony stems when they weren’t commercially available anywhere else. It was a potential cash cow.

The growing conditions aren’t just good in Alaska, they’re ideal. Due to the extended daylight during Alaskan summers – upwards of 20 hours of sun when the peonies are actively growing in June – flowers can grow as big as a human head.

The hue of Alaskan peonies ranges from buttery white to pale pink and magenta. The pink “Sarah Bernhardt,”’ a fragrant, double-petaled bloom, is one of the most popular in Alaska. But with over 3,000 types of peonies out there (including the “Pink Parfait,” “Princess Bride” and “Bowl of Beauty”), Alaskan growers are still busy testing newer varieties.

Alaska, as it turns out, is one of the few places on Earth where peonies bloom in July. This is prime wedding season.

Pat Holloway also happens to work for Alaska’s Agricultural and Forestry Experiment Station – a program jointly funded by the state and federal government to research agricultural development. She seized the opportunity with these showy blossoms, planting the first peonies in 2001 to suss out whether they could be grown for commercial purposes. She went on to create test sites in Kenai and Homer.

With many weddings happening between June and September, the fact that Alaska is one of the only places in the world where peonies bloom during this same window has been a huge boon to business. Alaska also happens to be an international cargo hub with regular flights from Anchorage to Europe, Asia and the continental U.S.

To complete this perfect storm, in 2009 a number of residents in Homer received grants to install “high tunnels,” greenhouse-like structures covered in clear polyethylene that extend the growing season. These were primarily intended for food production, but some farmers also use them for peonies.

Homer, Alaska, home to a number of peony farms, is located on the tip of the Kenai Peninsula in south-central Alaska, a 220-mile drive south of Anchorage. The town sits along the northern bench of Kachemak Bay, an awe-inspiring body of water with fjords and glaciers to the south. Homer has become as much a tourist destination as a fishing hub, with former halibut long-liners ferrying tourists in water taxis and fishwives running bed and breakfasts during the summer.

Beth VanSandt runs Scenic Place Bed and Breakfast in Homer and her husband fishes nearby in Cook Inlet. ‘She started farming peonies on her 10.5 acres in 2010. Her first harvest came last year, producing 3,000 to 5,000 stems. “It takes three to four years before you can harvest peonies,” she explains. “They need to keep putting energy back into the roots, so you can’t harvest every bud – just five out of ten.” This year she plans on harvesting between 10,000 and 15,000.

VanSandt is ahead of the pack: Most of the growers in Alaska started in 2012, which means their flowers will be coming on the market in the next few years. “Right now the prices are stable,” she says, “but in three years, when all the new farms start selling, things could change.”

Other growers have a sunnier outlook. Shelley Rainwater owns Glacier Peonies in Homer, and has been working with other Kenai Peninsula growers to start a cooperative with a centralized sales and transportation hub. She doesn’t think it’s possible for Alaskan growers to flood the market.

“The Dutch can sell over 30 million stems in a 30-day window,” she says, “and with the increasing popularity of peonies, demand is only rising.”

Peonies: Where do they come from? What are they good for? Here is an annotated list of the flower’s greatest moments.


*Peonies stretch back to ancient China, where, over a thousand years ago, they were cultivated for medicinal use.

*The modern U.S. peony industry can be traced to Amasa Kennicott selling peonies to local florists in Chicago in 1884. (Kennicott Brothers is now a major U.S. flower wholesaler, still based in Chicago.)

*According to Amy Pettit of the Alaska Division of Agricultural Marketing, peonies are a “very popular wedding and special event flower” because “they are big and smell good.”

*The top producers of peonies in the world are Chile, Israel, the Netherlands, the U.S. and New Zealand. The bloom times of these flowers are staggered to cover both the Christmas season rush, and the June and July rushes (wedding season).

*Prices of cultivars can range between $12 and $150 a root, depending on the variety.

*The cut flower industry is worth an estimated $40 to $60 billion.