Inside Job: A New Chip Tells Farmers When to Water

A new type of moisture monitor makes the leap from measuring soil levels to gauging the water levels within a plant itself. 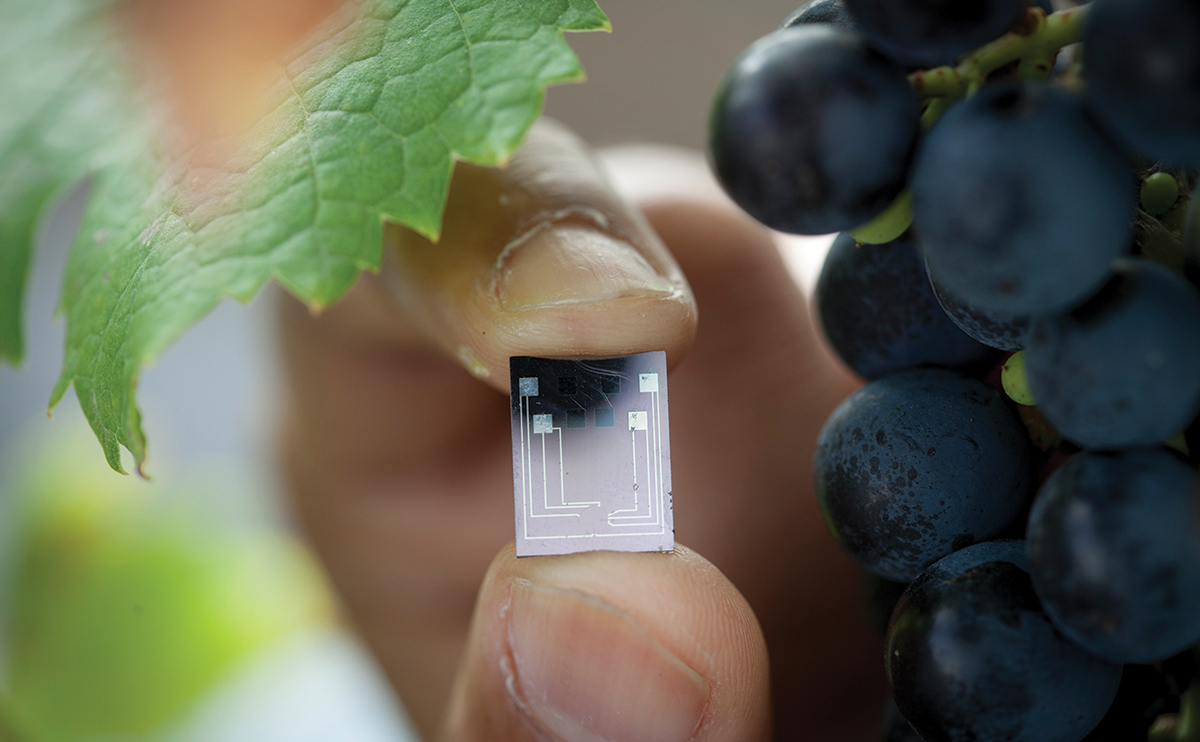 For example, grapes grown for the premium cabernet and merlot varieties require very precise amount of water to produce fruit of just the right sweetness. But modern measurements of plant water levels are far from ideal, says Alan Lakso, a professor at Cornell University who has been studying plant physiology for 40 years. Most commercial methods measure water levels by placing moisture readers in soil. But grapevine and apple tree roots like to travel – they can sprawl far from the reader location and skew the picture.

Measuring water levels inside the plant itself is a more accurate way to do it, but it’s a manual, labor-intensive process. Measurers cut off a leaf, place it into a pressure chamber and apply pressure to it until water comes out of the severed trimming. Because the method is time-consuming and slow, growers don’t use it often. Neither does it provide a continuous picture of the plant’s health, Lakso says, likening the process to taking a blood pressure on a patient once a week. “It tells you what it is, but it doesn’t tell what it was the week before,” Lakso says. “I wanted to have a way of monitoring plants continuously.”

To measure plant water levels continuously, every plant has to be equipped with its own personal water sensor – and that’s exactly what the Cornell team went for.

So he went inside the plant, “Fantastic Voyage” style.

To measure plant water levels continuously, every plant has to be equipped with its own personal water sensor – and that’s exactly what the Cornell team went for. Lakso and Abraham Stroock, associate professor of chemical and biomolecular engineering, as well as Vinay Pagay, a Ph.D student at the time, created an electronic microchip water sensor that can be inserted right into the plant. In building the chip, they used the plants’ very own architecture for water management, basing the design on plant physiology.

Plant leaves have tiny pores filled with water brought up from the roots; that water evaporates through the leaves’ membranes. The chip also has a cavity filled with water and a membrane through which water evaporates. As the plant’s water depletes, so does the sensor’s. When the level dips, the chip sends a signal to a data logger via a wire or a wireless transmitter to be interpreted and stored. The farmer is tipped off that it’s time to water the plants. When crops are quenched, the chip will replenish its moisture, too, and the cycle will begin anew.

The chips, which researchers estimate can be mass-produced for about $5 each, will allow growers to dynamically adjust their irrigation schedules to various weather flukes that affect water evaporation in plants.

“The water state of a plant changes with the weather,” says Lakso, adding that clouds, dry hot air, and wind can cause rapid changes. The chips will allow growers to take quick readings and follow up with quick actions.

The technology is of a particular interest to wineries because red grapes benefit from slight water shortage later in the season, says Pagay, who studied viticulture and pomology – the sciences of growing grapes and fruit.

The chips will tell the growers whether they need to irrigate or not, thus preventing unnecessary water use.

“A plant that has too much water tends to put more energy into the leaves,” he explains. “We are trying to make it put more energy into the grapes.” That’s why a little bit of “water stress” leads to better tastier fruit. “The grapes come out sweeter,” Pagay says. “Varieties like the Napa Valley cabernet and merlot are made from grapes that typically have some amount of water stress.”

Pagay says the chips will soon start their testing rounds with Ernest & Julio Gallo Winery of Modesto, California. But the technology has a much broader use than just the wine industry. As the U.S. and other parts of the world labor under a record-breaking drought, the team hopes that their invention can help farmers who are coping with serious water shortages, or work in dry climate areas.

The chips will tell the growers whether they need to irrigate or not, thus preventing unnecessary water use. About 70 percent of humans’ water consumption is used for agriculture, so optimizing irrigation is a big issue, says Lakso.

“We certainly hope and expect the sensor to help optimize irrigation and water use.”