As the coconut water market explodes, the world's trendiest drink tries to get more natural. 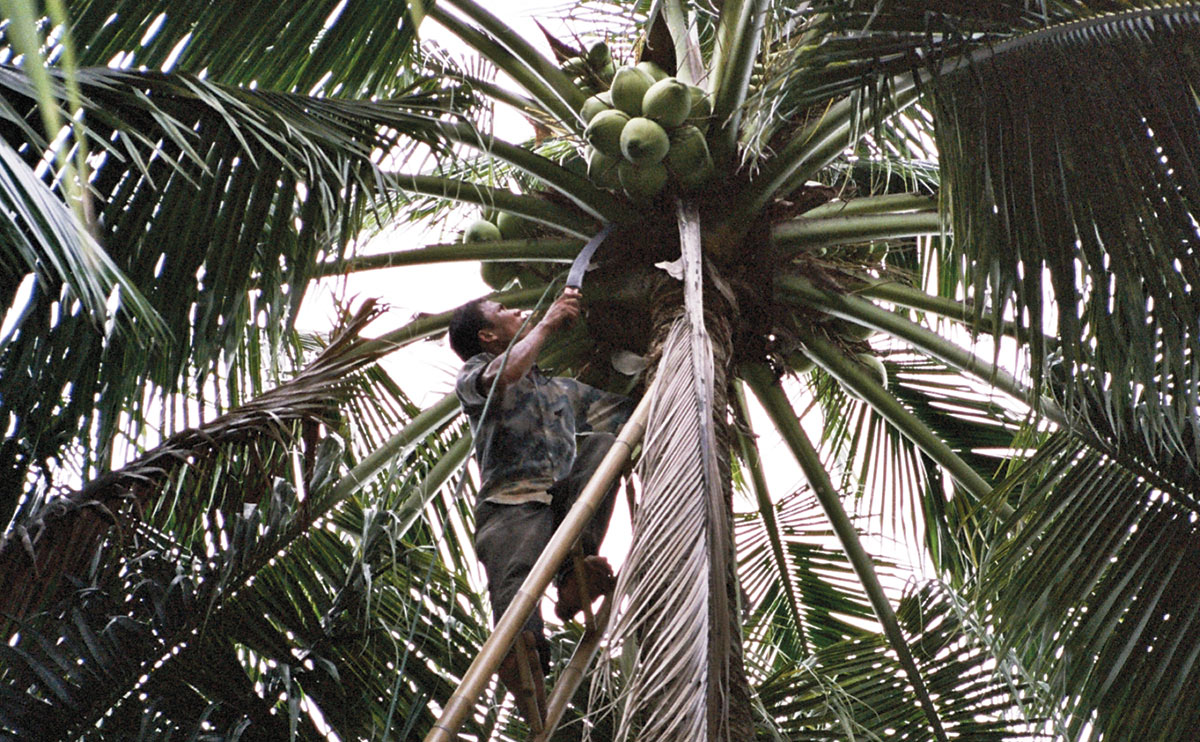 Just 10 years ago, one of the few ways to drink coconut water was to fly to a beach somewhere and crack a green nut fresh from the tree. The straw, of course, was optional.

Today, coconut water is nearly a billion-dollar industry. Global demand for coconut water grew by 168 percent from 2010 to 2013 and the number of new products has skyrocketed, increasing 540 percent between 2008 and 2012.

Vita Coco, the leading brand, could be credited (or blamed) for creating this swift mainstream demand. With Madonna as an investor and Rihanna on billboards, their global sales jumped to $323.2 million last year. They are even creating kids’ coconut drinks with 20th Century Fox and Blue Sky Studios, inspired by the film “Rio 2.” 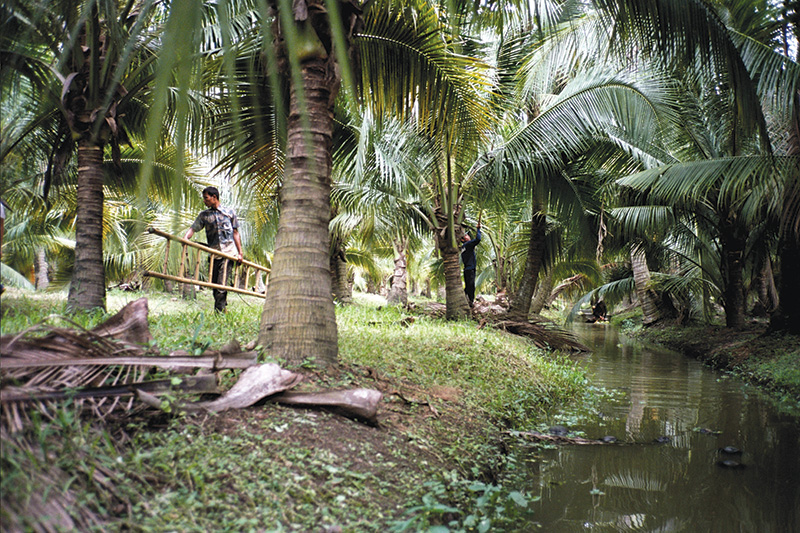 Another tree, another bunch of green nuts. Harmless Harvest prides itself on strong relationships with its farmers.

Coca-Cola and PepsiCo., meanwhile, have rushed to buy two other major players, ZICO and O.N.E., respectively.

The race is on: Coconut water companies are now falling over themselves to up the coconut water ante. Boasting of unique selling points – “organic,” “raw” and “pure” are three favorites – these mainstream beverage companies are also adding exotic flavors like green tea, espresso and even Thai chili extract. And with those flavors come lots of sugar, food coloring and chemical additives.

How did coconut water get so far from its roots? One, because coconut water is highly perishable when taken out of its protective nut, most commercial bottlers resort to flash pasteurization, which can destroy some of the nutrients and taste of natural coconut water. Other bottlers make coconut water from concentrate. 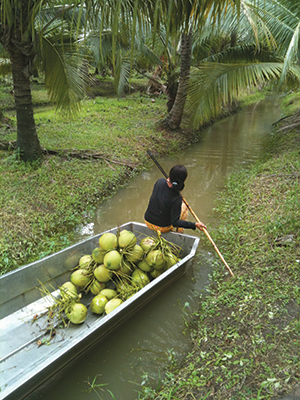 A farmer going to another tree via canal. Boats carry the nuts.

Almost overnight, this one-time ultranatural health drink has become just another adulterated beverage, a fact that has not gone unnoticed by consumers. It’s why a whole new crop of enterprising companies have sprung up to return some sustainability to this inherently natural drink.

One of the new wave of coconut water producers, San Francisco”“based Harmless Harvest, says its coconut water is “100 percent raw.” The company has replaced heat pasteurization with a high-pressure processing (HPP) system – treating the water with thousands of pounds of pressure to prevent bacteria growth without stripping it of nutrients.

The company also spent years building relationships with farmers in Thailand who still grow coconuts through traditional methods, without chemicals or fertilizers, and harvest them carefully. They pick coconuts by hand, lower them by rope and then transport them by boat via canals to prevent damage. To provide farmers with much-needed stability in a volatile marketplace, Harmless Harvest pays a higher price for organic coconuts, which has raised the overall price for coconuts across Thailand.

Another company, Bali-based Big Tree Farms, has devised a solution to the carbon-footprint problem, though it ironically necessitates another change in how the coconut water is found in nature: It sells the water in a dehydrated form. Co-owner Frederick Schilling says because coconut water is comprised almost entirely of ordinary water – about 95 to 97 percent, in fact – it made sense to take water out of the equation and offer consumers the nutrients in powder form. “It’s just a lot of water being shipped around the world for 3 percent nutrients,” he says.

Then there’s the way this natural product has been bottled, treated and flavored before ending up on supermarket shelves around the world.

Jax Coco, another new entrant to the market, has cut back on waste by becoming one of the first coconut water companies to introduce a recyclable glass bottle (bearing a sleek design by Alasdhair Willis, Stella McCartney’s husband).

The Hong Kong”“based brand has also made replanting a core part of its mission in the Philippines, where aging palm trees are hugely problematic. Many trees were planted between 50 and 60 years ago and simply can’t keep up with global coconut demand, says Jane Gottschalk, co-founder of the company.

The smaller brands are making progress, which isn’t lost on farmers at the end of the supply chain.

Samak Sapma, a coconut farmer who supplies nuts to Harmless Harvest, says as long as the farming itself is done in a sustainable manner, he doesn’t see a problem with the growing fad for coconut water.

“If coconut trees could grow in the U.S., it might not be necessary to send the coconut water from Thailand,” he says. “But I don’t think [they] could grow coconut trees as sweet and aromatic as the Thai coconut. People know the difference!” 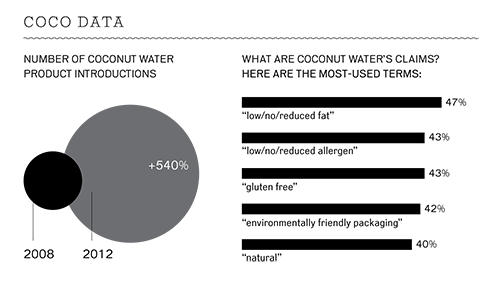 Where Does Your Coconut Grow?

Originally the big three U.S. companies got most of their coconuts from Brazil, but demand quickly outstripped supply. This led them to shift sourcing to Asia, where nearly 90 percent of the world’s coconuts are grown.
As of 2012, Indonesia is now the top global producer, growing an estimated 19.8 million tons of coconuts, followed by the Philippines with 17.5 million and India with 11.6 million, according to the United Nations Food and Agriculture Organization (FAO).

Popular
The Future of Hay Drying in AmericaLindsay Campbell
How to (Actually) Get Rid of Fruit FliesEmily Baron Cadloff
7 Smokable Plants You Can Grow That Aren’t MarijuanaBrian Barth
6 Differences Between Llamas and AlpacasAndrew Amelinckx
How to Get Rid of Spotted LanternfliesShelby Vittek
Explore Modern Farmer
Related
Food & Drink, Labor
The Chocolate Companies Working to Uproot Unfair Labor PracticesEmily Baron Cadloff
MTMF, Plants
Meet the Modern Farmer Helping Colombian Coffee GrowersLindsay Campbell
Environment, How-To, Plants
How to Get Rid of Spotted LanternfliesShelby Vittek
Plants
There’s a Pumpkin Fungus Among UsLindsay Campbell
wpDiscuz
We use cookies on our website to give you the most relevant experience by remembering your preferences and repeat visits. By clicking “Accept”, you consent to the use of ALL the cookies.
Cookie settings ACCEPT
Privacy & Cookies Policy