Researchers have now shown that domesticated goats can learn a relatively complicated task very quickly and recall that task almost a year later. 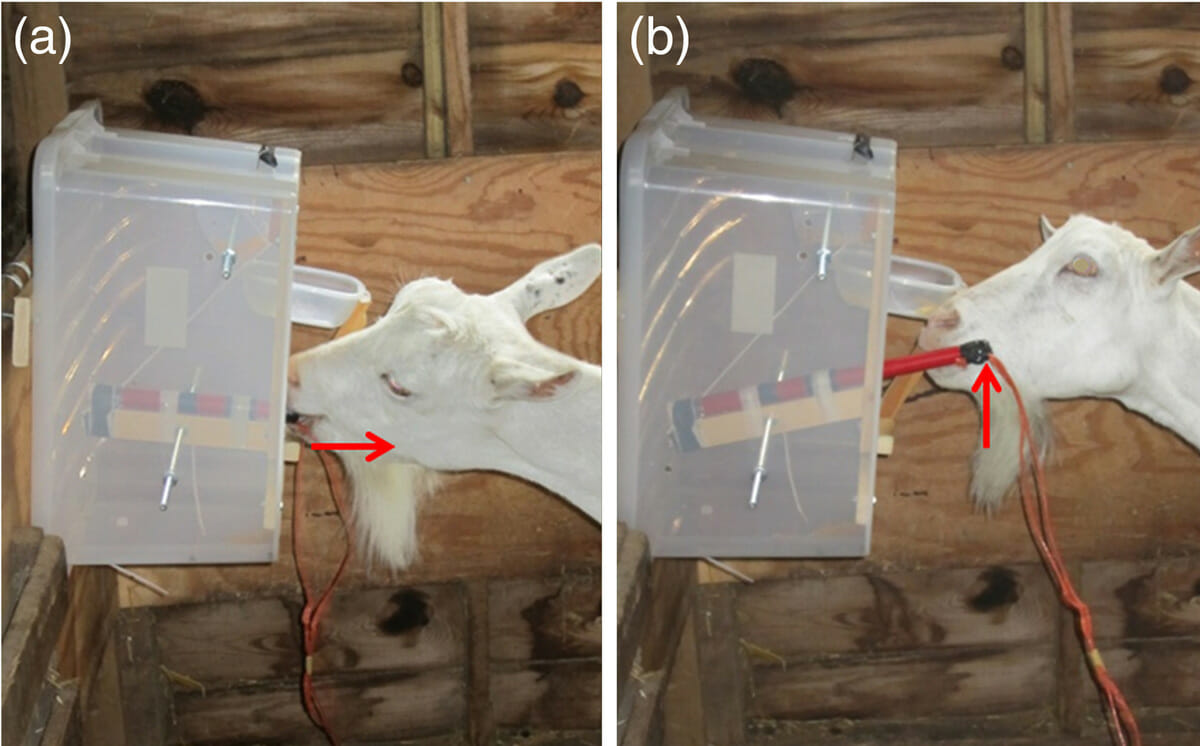 But new research published in the journal Frontiers in Zoology suggests that goats are not, in fact, the dumbest kids on the livestock block. Researchers at Queen Mary University of London in the U.K. have now shown that not only can domesticated goats learn a relatively complicated task very quickly, they show exceptional recall of that task almost a year later.

“There’s a common public perception that goats are stupid,” says Alan McElligott, a senior lecturer at Queen Mary University who conducted the new study along with Elodie Briefer, of ETH Zurich in Switzerland. “But when you speak to farmers? There’s a public perception, but not amongst the people who actually work with them.”

What some might see as idiocy or vacancy in your average goat, others see as curiosity or even cleverness. And the new study leans toward clever: McElligott and Briefer tried to teach 12 goats at the adorably named Buttercups Sanctuary for Goats how to use a two-step process to open a box and get a food reward. The goats had to first use their teeth to pull down a lever, and then nudge the lever back up in order to release the treat.

Nine of the 12 succeeded, in an average of only eight tries. “We were surprised at how quickly they learned it,” McElligott says. “I wasn’t surprised that they could do it.”

First, the obvious question: whither those three failure goats? Two of them simply took a more direct approach: they tried to break the box with their horns. Fair enough – survival of the fittest doesn’t usually care how you get enough to survive. The researchers, though, decided they’d prefer to keep their experimental set-up intact, and removed those goats and counted them as failures. The last goat… well, she just couldn’t quite get the hang of it, even after 22 tries.

All of the goats solved the food box puzzle on the very first try, even after not using the apparatus for ten months.

The smart goats, meanwhile, were also retested at various points following that first go-round. They showed remarkable recall: all of the goats solved the food box puzzle on the very first try, even after not using the apparatus for ten months. It only took an average of 38 seconds for them to figure it out again, with some goats breezing through it in only six seconds. One particularly hungry (apparently) participant leapt over a wall to get to the box, and solved the puzzle in just a few seconds.

So what does this tell us about barnyard intelligence, or even about wild goats that live in many places around the world? First of all, it pushes back against the idea that domestication may dim the bulbs of some animals, compared to their wild counterparts. Various studies have shown domestication to reduce brain size in mammals, which would suggest a corresponding dip in intelligence; the idea here is that when you remove selection pressures of the wild world, animals being fed and protected just don’t need all that brain power anymore. And since we humans have bred animals like goats for meat, milk and hair, whether or not that animal can solve complex problems really doesn’t matter much. But the animals studied by McElligot and Briefer suggest the wisdom of wild goats may not have diminished much in domestication.

But it also tells us that not all even mildly clever animals learn in the same way. Chimps and other animals have shown that they learn best by repeating things they see. Some of the goats at Buttercups were given a chance to emulate a “demonstrator” goat; they performed no better than those goats that had nothing but their own imagination to go on.

In the wild, feral goats live in large, hierarchically complex social groups, which the researchers thought would bend them toward social learning. Instead, their own ingrained curiosity – the word that farmers would likely use instead of “idiocy” when it comes to Capra hircus – seems to play a bigger role in how they learn a new trick.

Perhaps most of all, these findings might teach us that we humans tend to form biases of our animal brethren a bit quicker than we should. Pigs are readily assumed to be smart at this point (and indeed, research seems to suggest that they are) – it’s a cliché on par with the can-eating idiot goat. But that’s a problem that’s more on us than on them.

These findings might teach us that we humans tend to form biases of our animal brethren a bit quicker than we should.

“People in general were too quick to dismiss the potential intelligence of animals like sheep and goats; unlike pigs, which seem to have cornered the market in public acclaim – probably thanks to George Orwell,” says Richard Byrne, an evolutionary psychology professor at the University of St. Andrews in Scotland. In a 2009 New York Times story on pig intelligence, he jokingly suggested that the only way to impress people with barnyard smarts is to switch over to goats or sheep – now that someone actually did so, he says in an e-mail that he is “delighted to hear about new work on goat abilities, but can’t say I’m surprised. They live in long-lasting social groups, comparable to many primates, and forage on hard-to-get foods, so it would pay them to be smart.”

McElligott says he will continue to try and decipher goat intelligence, including perhaps testing whether a change in the puzzle apparatus’s appearance – but not function – would affect memory tests, or whether a human demonstrator would work better than a goat demonstrator. These ideas might shed a bit more light on exactly what goat evolution has deemed important for these animals, and could even convince people to treat their goats better. ”Ultimately we’re trying to promote better welfare,” McElligott says. “Look what these animals can do! It’s easier to promote good welfare if people think their animals are clever.”

Dave Levitan is a freelance science writer, and his work has appeared in Scientific American, Discover, Slate, and many others. Find him on Twitter @davelevitan and at his website.