The Joy of Cooking Invasive Species

Want to help out your local ecosystem? Chow down on an invasive species today. 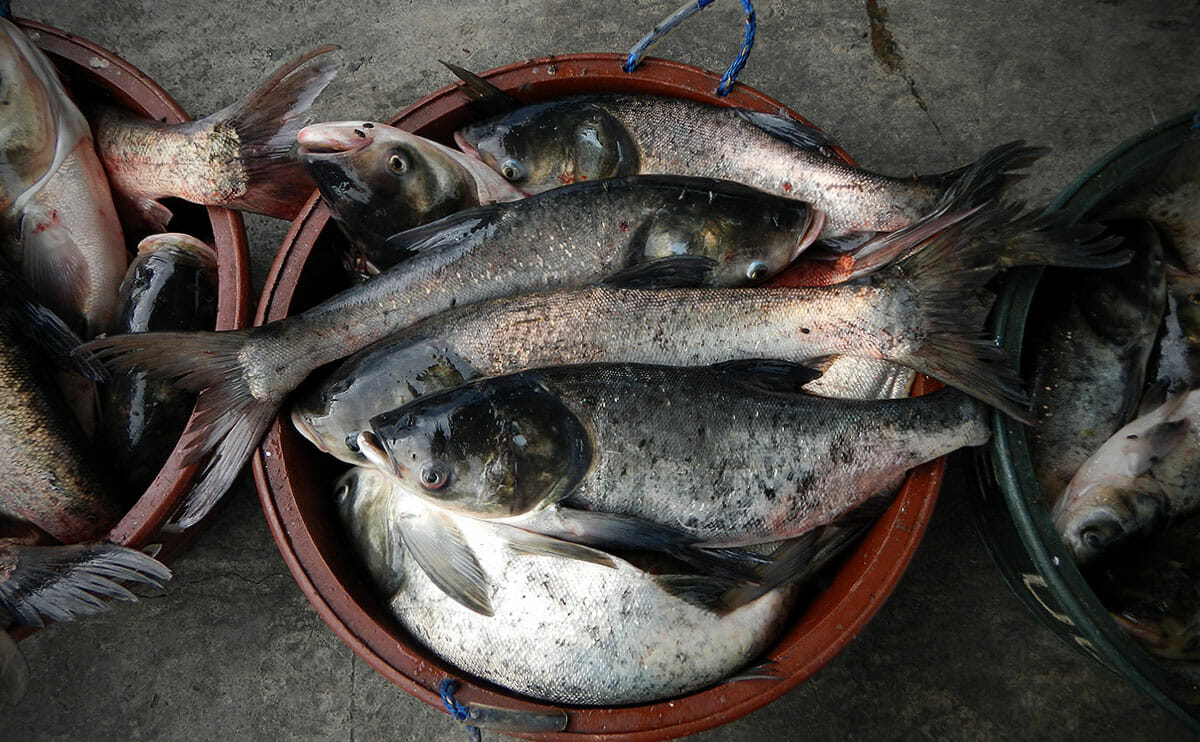 Deines heads up a group of biologists from around the world who run Invasivore.org, a site that tracks news in the field and provides seasoned advice on controlling invasive species by dining on them. They call themselves “invasivores.”

“Eating your enemies feels really good,” he says. “But the real goal is to help people understand invasive species a little better and bring attention to their impacts.”

Kudzu, feral pigs, bullfrogs and burdock are just a few of the foods in the invasivore repertoire. These pests are all edible and some are considered delicacies in their native land. Invasivores seek to re-frame these species as an ethical food choice and have a slew of nifty slogans for the cause, like “Eating Aliens” and “Eradication by Mastication.”

A unique feast takes place in Oregon each summer to help spread the word. Sponsored by the Institute for Applied Ecology, the annual Invasive Species Cook-Off attracts a mix of local families, amused businessmen and student activists to sample the exotic fare. Live music flows through the crowd along with pamphlets spelling out the evils of invasive species. Under a big top tent, a selection of local chefs competes in the main event.

Last year’s first-prize winner, chef Jason Bigas, is no stranger to odd ingredients. “I used to work at a fish and game restaurant in Jackson Hole, Wyoming,” he says. Cooking foods like pigeon and elk were familiar to him, but these were farm-raised game. Here he served wild boar marinated in a sauce that stole the show. The secret ingredients? – borage flowers, Himalayan blackberry, purslane and wild carrots. Bigas fermented some of the wild greens into an “invasive kimchi,” he revealed, “to get rid of the bitterness.”

There have been a few animals that have escaped the invasivore menu, but not for lack of trying. Take, for instance, the pythons that have recently invaded southern Florida.

Originally from Burma, these pythons reach twenty feet or more in length and have disrupted the local food chain with their massive appetites. In Burma, they are a delicacy; invasivores hoped the same could be true in Florida. After all, local land management agencies have encouraged python hunting, going so far as to organize eradication events, like the annual Python Challenge.

Unfortunately – and for reasons unknown to science – python flesh accumulates mercury at levels two times the limits considered safe for consumption by the state of Florida, more than any other organism in the Everglades. Deines’ website overflows with important information like this that keeps invasivores safe in their pursuits.

Kudzu, feral pigs, bullfrogs and burdock are just a few of the foods in the invasivore repertoire. These pests are all edible and some are considered delicacies in their native land.

In Louisiana, Chef Philippe Parola spreads the word on the culinary qualities of invasives through a relentless campaign of public appearances and cooking demonstrations. A Frenchman, Parola comes from a culture of open-minded eaters. In his childhood, wild boar, rabbit and escargot were common fare.

As an enterprising young chef in Baton Rouge, he took it upon himself to expand the culture of food in America, while combatting invasive species at the same time. He spoke to me with glee about eating nutria, a semi-aquatic rodent introduced from South America as a fur-bearing game species in the 1930s.

“The best red meat you’ve ever had,” he says in an undeniably charismatic French accent.

Nutria is an herbivore and has overgrazed large swaths of Louisiana’s wetlands now that demand for their pelts has declined. Parola held cooking demonstrations and events where the public could sample nutria harvested from the wild and The Louisiana Department of Wildlife and Fisheries worked closely Parola to try and make nutria an appealing source of game for hunters. Though he created a media sensation, Parola admits he has never overcome the negative associations of the nutria’s rat-like appearance. The other problem was political. The FDA simply does not allow animals hunted in the wild to be sold for human consumption, meaning the nutria probably doesn’t have a future as a restaurant staple.

Parola has had better luck with another alien species found in Louisiana bayous. Asian carp are America’s hottest new invasive and Parola has become their ambassador within the food industry. He calls it the “Silverfin Craze,” an attempt to rebrand the fish for greater appeal to the American palate. On a platter, Asian carp are indistinguishable from any other mild-flavored white fish and there are millions of them clogging up the Mississippi River and its tributaries. Bushels of carp are turning up in the nets of commercial fishermen instead of the native species they seek, but there has been no market for the invaders – until now.

Gray “Butch” Magee, a friend of Parola who lives up the river in Illinois, is not just dreaming of a solution to the problem, he’s built one. His company, American Heartland Fish Products, will open America’s first industrial carp processing plant this spring.

According to Magee, eating Asian carp is not as simple as it sounds: they are a mouthful of bones. After two years of market analysis and research into de-boning techniques, he realized that selling carp filets to American consumers was an unprofitable proposition. Magee found that Asian cultures love Asian carp; they just pick the bones out as they eat. Not so in America.

Instead, his plans for cleaning carp out of America’s rivers turned in another direction. He has an exclusive license for a new form of food processor, called the Agricultural Byproduct Value Recovery System, or AVPRS for short. Magee’s workers will feed up to 60,000 pounds of fresh carp into the device during each shift and it will spew out the equivalent quantity of fish oil, fish meal and bone meal – not for human consumption, but as additives for animal feed.

Where there is a resource to be exploited, entrepreneurs will find a way. Exploiting to the point of extinction generally has negative undertones, but when it comes to invasives, environmentalists can only pull up a seat at the table.

Instructions:
Season Silverfin to taste, pour olive oil in a baking pan than place Silverfin steaks, sprankle garlic, onion and parsley then add lemon juice, baked at 325 for 5 minutes then add white wine and diced tomato and continue baking at 325 for 12 minutes. Serve over pasta, rice or mashed potatoes.