The timing of milk production in bovines is a carefully balanced biological ballet. 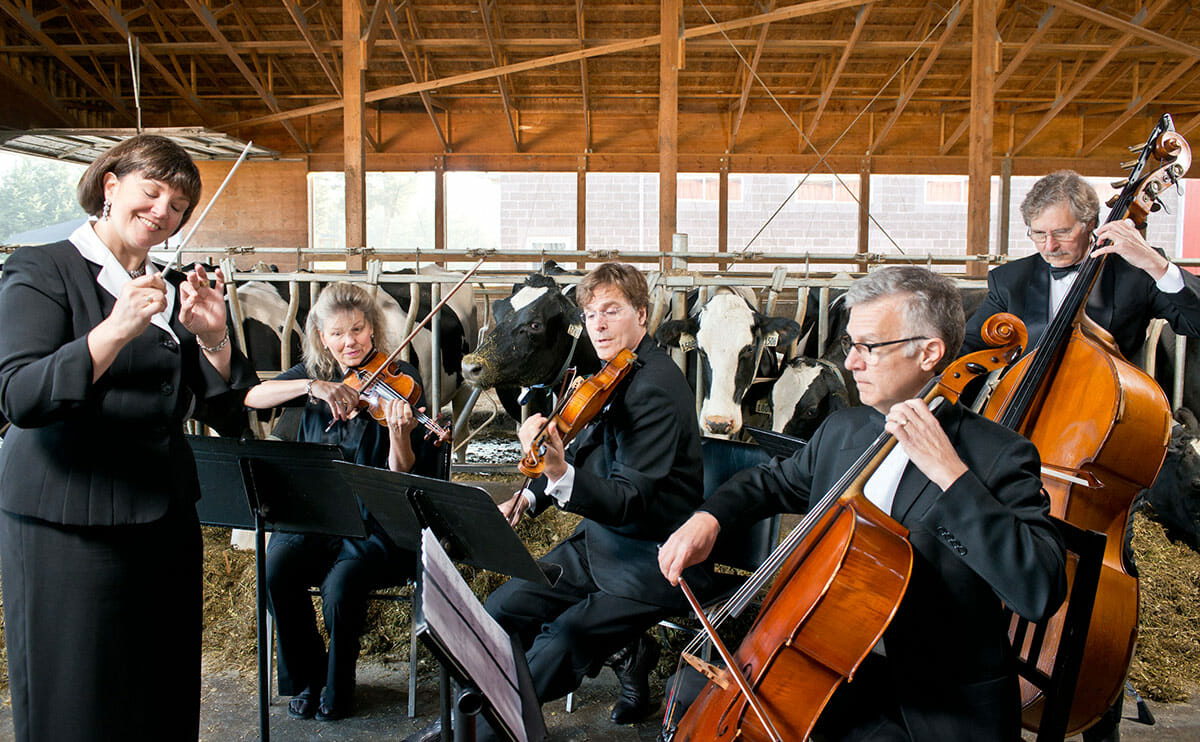 Stress can inhibit the release of oxytocin – a hormone key to the milk-releasing process. So the happiness of cows is very much on the minds of farmers. The California dairy industry even declared “Happy cheese comes from happy cows” as part of their Real California Milk Campaign. So how is a farmer to balance the needs of the herd with that of her business? The answer may be as simple as switching on the radio.

Dairy farmers have become experts in cow comfort, from barn design to climate control engineering to keep cows as content as possible. But not all the attempts to sooth cows are quite so high tech. It may sounds silly, but some farmers swear by playing relaxing tunes for their herd for maximum milk results. But can you really slow jam your way to higher milk production? Turns out that yes, you just might.

In 2001, there was a minor stir at the University of Leicester in England when a pair of psychologists showed that slow music played at a large dairy farm increased the cows’ milk production by 3 percent as compared to fast music which had no effect. Despite the fact that a 3 percent increase in milk production could mean significant dollars to a large dairy, scientific literature is mostly mute on the subject of bovine music preferences. What is available consists mostly of subjective observations and anecdotes.

“I am not sure why there is not more research on the cow-music-milk production relationship,” says Dr. Leanne Alworth, assistant director of University Research Animal Resources at the University of Georgia’s School of Veterinary Medicine. “Perhaps because most researchers interested in animal welfare are not looking at production parameters specifically?”

‘I have found that music can be beneficial to the well-being of the cows, but it must be consistent and calming.’

Scientific method aside, the dairy industry has been tinkering with music long before psychologists got involved. “In the days when there were tie stalls and stanchions, there was the discussion about how if you played music in your barn, you would increase milk production,” says Kristine Spadgenske, who milks about 250 cows on her dairy farm in Menahga, Minnesota. “At our farm you can always tell when the radio is not on because the cows are way more jumpy and less likely to come into the parlor.”

Other dairy farmers’ reports corroborate the possible calming effect of music on cows. “From a sensory perspective, loud, distracting noise can be one of the greatest stressors to dairy cows and their well-being,” says Juan Velez, executive vice president of Aurora Organic Farms, a large dairy corporation centered in Boulder, Colorado.

Playlists to Milk By

“In terms of music, in my 30 years working with dairy cows, I have found that music can be beneficial to the well-being of the cows, but it must be consistent and calming,” says Velez. “If the music volume is kept constant and the style of music is consistent, and everything else in that parlor is well managed and maintained, music can have a positive effect on milk let down.”

In 2012, the BC (British Columbia) Dairy Association put the theory of music’s potential effects on milk production to the test with their “Music Makes More Milk” contest. Inviting the public to create and submit songs that cows would “vote” on based on milk production, this campaign was the brainchild of the association’s advertising agency in an effort to connect Canada’s families to the dairy industry.

“The contest was meant to be fun and interactive,” explains Jennifer Woron, marketing manager with the BC Dairy Association. “Studies conducted around the globe showed that music can have a calming effect on cows. Through music, people could not only understand the dairy industry better, they could actually impact the farm’s output by composing a song to make cows happy and produce more milk.”

First, humans got to vote on the songs submitted. Then a “jury” consisting of five Holsteins with pastoral names such as Daffodil and Jasmine listened to the five songs with the most votes during a measured milking session. A little ditty reminiscent of soft-core elevator music called “A Moo Down Milk Lane” won. “The objective of the contest was more about creating a fun, positive consumer engagement with milk,” says Woron when asked about the scientific integrity of the contest. “As a one-off project, any changes in milk production would not be significant enough to draw scientific conclusions.”

Through music, people could not only understand the dairy industry better, they could actually impact the farm’s output by composing a song to make cows happy and produce more milk.

Many dairies in the U.S. play either country or Spanish-language music in parlors. This choice is highly dependent on milking employee preferences. However, no matter how many calls are made to the request line, one only has so much control over what’s played on the radio. This begs the question: If you could make the perfect mix tape for a dairy, what would it include?

“The beat of the music seems to matter more than a specific genre,” says Alworth. “[In studies] animals seemed, in general, to find slow, rhythmic music most relaxing. Perhaps easy listening or new age would be best.”

Frannie Miller, of Sulphur Springs, Texas, plays Spanish-language music in her parlor where her largely Latino employees milk about 130 Jerseys. “Our cows will tolerate some country and western, but they do not like Willie Nelson,” she reports. Their milk production doesn’t drop, but something about the country legend’s warble agitates the cows.

From a practical standpoint, perhaps the use of music in the milking parlor is just an easy way to drown out mechanical noise and provide the animals with a consistent environmental element.

“Music is a calming sound to the cows,” says Spadgenske, the Minnesota dairy farmer. “They get used to that. If they’re calm and content, then obviously milk production is going to be better. There are different ways you can reach that, and I think that music happens to be one of those ways.”

As for those dairymen looking beyond music for the next trend in cow comfort, a refresher course in English literature may be required. In a study in England, dairy cows reportedly increased milk production during a theatrical reading of Shakespeare’s “The Merry Wives of Windsor.”

i want to do research in the same line in Odisha state, in INDIA.

is there any report that says about the increase in milk yield not only due to cows physiology but also makes the milking man relaxing which will add an impact on the efficiency of milking employee?