The Ag Patent Explosion of the 1800s - Modern Farmer
Lifestyle

The Ag Patent Explosion of the 1800s

The latter half of the 1800s was a time when America turned on the jets to head west and fill the space between New England and California. With that, food production needed to go up and the number of farms began to skyrocket to its peak in 1935 of 6.8 million. With each farmer trying […] 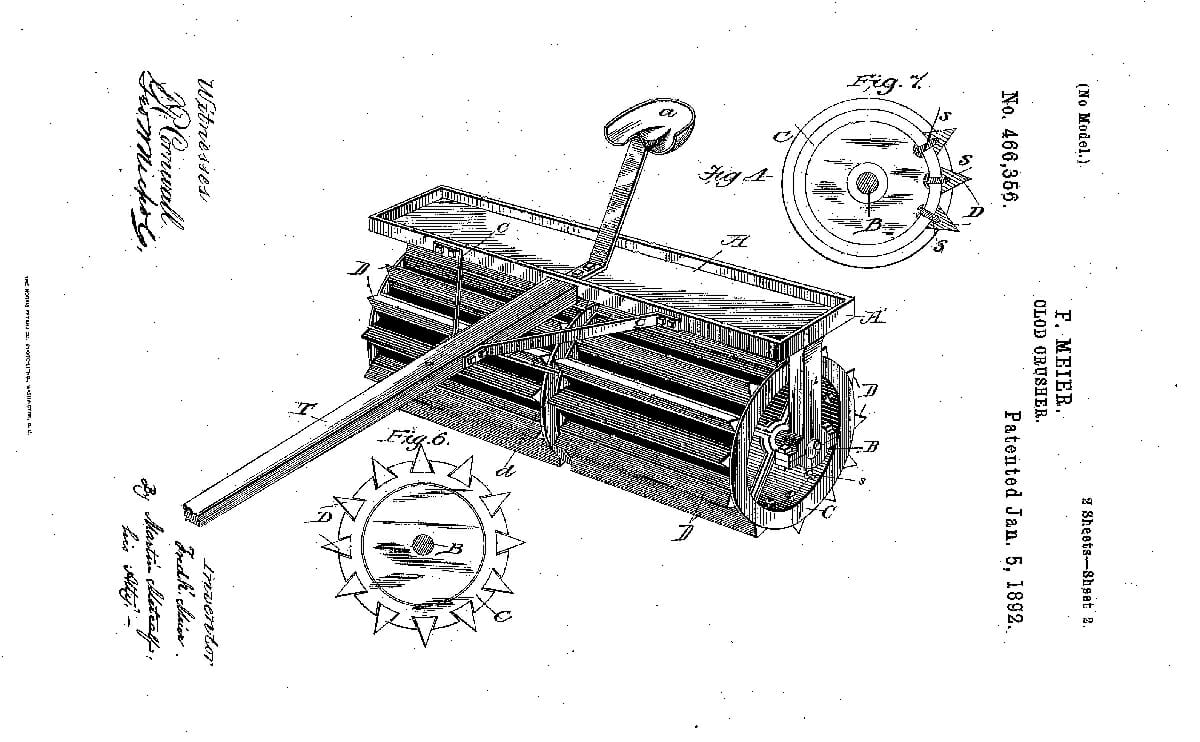 The latter half of the 1800s was a time when America turned on the jets to head west and fill the space between New England and California. With that, food production needed to go up and the number of farms began to skyrocket to its peak in 1935 of 6.8 million. With each farmer trying to get a leg up on the next guy, necessity became the mother of invention ”“ or at least, the mother of improvement.

Take the soil crusher, or soil pulverizer. Though it has a cool name, this is one of those devices around the range that doesn’t quite have as sexy a task as say, a crop-monitoring drone. Instead, it performs one of the basic, behind-the-scenes tasks required to recycle a plot of land: pulverizing dirt, rocks and roots down to a fine mixture for planting a new crop.

A uniform consistency helps water spread evenly and makes it easier for seedlings to poke their heads out and get growing. This was a need centuries ago just like it is today and; the soil crusher is one of those tools that can be done so many different ways that it’s silly to say someone “invented it.”

There is a whole class of soil crushers that are fixed in place; planters shovel in soil and it’s smoothed with roughly the same principles as a wood chipper. But the big ones are meant for covering lots of ground out on the range.

In 1886 Fred Hempworth and Lou Santany of Aurora, Illinois claimed to have “certain new and useful improvements” to soil crushers. Their idea was to haul two giant arms of rotors along the soil and grind it up as the apparatus moved along. The bit that Hempworth and Santany wanted to claim as their addition to the machine was that the operator could raise and lower the rotors so that the blades could dive at varying depths; maybe just get the topsoil, maybe get deep down and churn the dirt.

In recent years Dawn Equipment Company cited the patent, among hundreds others filed since then, on their own claims around new machines that delivered fluids to the soil and had to do with tillage.

After removing forest or heavy underbrush, these monsters roll through and ready the land for planting.

About a year before Hempworth and Santany, Lemuel Fithian from Absecon, New Jersey, showed off designs for a device that somewhat mimicked the paddles of a steamship. A front wheel churned up the soil while a second larger wheel pressed the dirt back down as the operator pushed from behind. The device sat close to the soil, looking something like a low-riding motorcycle in its profile.

When stacked against today’s soil crushers Fithian’s model looks like child’s play. Companies like Meccanica Breganzese and Seppi make behemoths with rows of grading teeth and powerful hydraulics designed to not only crush soil but mulch stumps and branches and destroy stones. After removing forest or heavy underbrush, these monsters roll through and ready the land for planting.

CNH International, a British farming equipment giant, gives a nod to William Knutzen in a number of patents it has filed in the last five years for its large tilling systems. Knutzen filed in 1887 and employed a delicate description of the blades cutting through the soil.

“When my machine is employed, the grooved roller effectually crushes the clods, instead of driving them down into the ground,” he wrote. “It leaves the surface in small ridges, which are flattened down and nearly obliterated by the smooth roller which travels in the rear.”

In CNH’s patent, 125 years later, you can hear echoes of the same considerations of how the gang of blades should cut the soil. Even today, there’s no right way to crush the soil:

“To improve the tilling action, those skilled in the art have attempted to change the angle at which the gang is oriented. However, an increased gang angle can cause complications. The increased gang angle will leave large clods of soil that may require multiple passes to pulverize.”