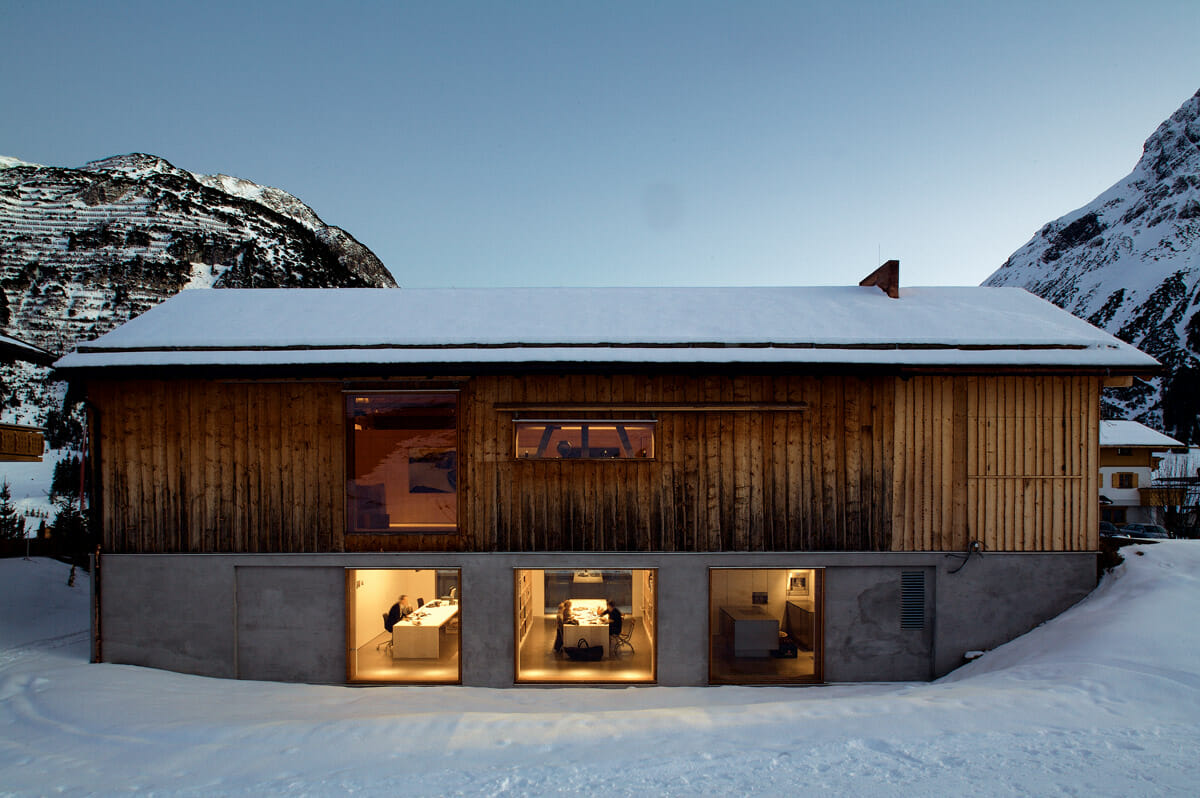 Long before “public space” and “sustainability” became popular buzzwords, the idea of a shared communal area was on the minds of Gerold Schneider and Katia Polletin. Then again, the founders and owners of Allmeinde Commongrounds – a converted mountain barn in rustic Austria – have been combining edgy intellectualism with the rustic and rural for the past decade.

Perched at the edge of the posh resort village Lech in Austria’s Vorarlberg region, Allmeinde has evolved from cowshed to arts residency and cultural venue. A weathered barn outside and a modern, airy loft inside, it’s also a brilliant example of how minimalist Alpine design can be blended with real family hospitality.

It’s a herzlichkeit (openheartedness) that blooms in the cold seasons – winter is the time to visit Allmeinde. Lech is one of Austria’s premier ski towns for, as Schneider says, “real skiers,” and Allmeinde’s cultural program is in full swing when the snow flies. In February 2014, an exhibition featuring British sculptor Antony Gormley opens.

While Allmeinde has only been around for 10 years or so, its roots are firmly in the past. Schneider spent his early childhood right here; his parents owned and operated Almhof, a popular five-star traditional Alpine hotel about 330 yards downhill from Allmeinde, on land that’s been in the family since 1450. But Schneider left for boarding school at 10, did his Austrian military service and then studied architecture, art and philosophy in Vienna. “A lot of people from rural areas who go to cities never return,” he says. But even as a student, he had an inkling he would bring the arts back to Lech at some point.

He returned sooner than he’d planned. When Schneider’s father died in 1996 and his brother fell ill six months later, he returned to Lech a year later with Polletin – whom he’d met in college – to help his mother, Hannelore, with Almhof. (Polletin’s sole prior connection to the mountains came in the late 1970s, when she played the role of Heidi in a German-Swiss TV series based on the Johanna Spyri novel. She is now an architect.)

Once there, the two decided to renovate a vast two-story barn, which Schneider’s father had previously purchased from a farmer and had used as Almhof’s employee quarters and storage. Together they designed Allmeinde and began constructing phase one”‰ – ”‰the upper story, once a hayloft”‰ – ”‰in 2000.

The open loft is lined in natural pine. The walls, clad with 3.2-inch thick clay, offer insulation. Soaring pitched ceilings frame a 1,500-square-foot space divided lengthwise by a birch cabinet unit. Acting like origami, the cabinet’s many sleek doors almost magically open or fold out to reveal a kitchen, a bed, a bathroom, shelving and work surfaces, all with impeccable handicraft. “Our region has wonderful craftspeople,” says Schneider. “Peter Zumthor, the architect, works with the same ones.”

Around 2005, nearly everything on the ground floor was replaced, in part, Schneider jokes, to “get rid of the cow pee smell.” The lower level now holds an office and private library of around 2,000 books on art, music, philosophy, Alpine life and travel, which visitors are welcome to read if they ask; there’s also a kitchen and guest bedroom, open to visiting artists and friends.

When it’s warm, the family (Polletin and Schneider have a 12-year-old son, Luis, and a 9-year-old daughter, Ida) uses Allmeinde as a summerhouse. But in winter Allmeinde becomes an intimate, important node for cultural discourse in Lech’s surprisingly cosmopolitan community. (Here is the place, after all, where Princess Diana once came for paparazzi-free ski holidays.) “Lech is not really rural. You live in the countryside, but you’re surrounded by people from all over the world,” says Schneider.