Tales from a Pack-Burro Racer

It's no secret I was not exactly an overnight success at pack-burro racing. But perhaps the better-kept secret is the sport itself - one of the planet's most obscure and difficult tests of man and beast. 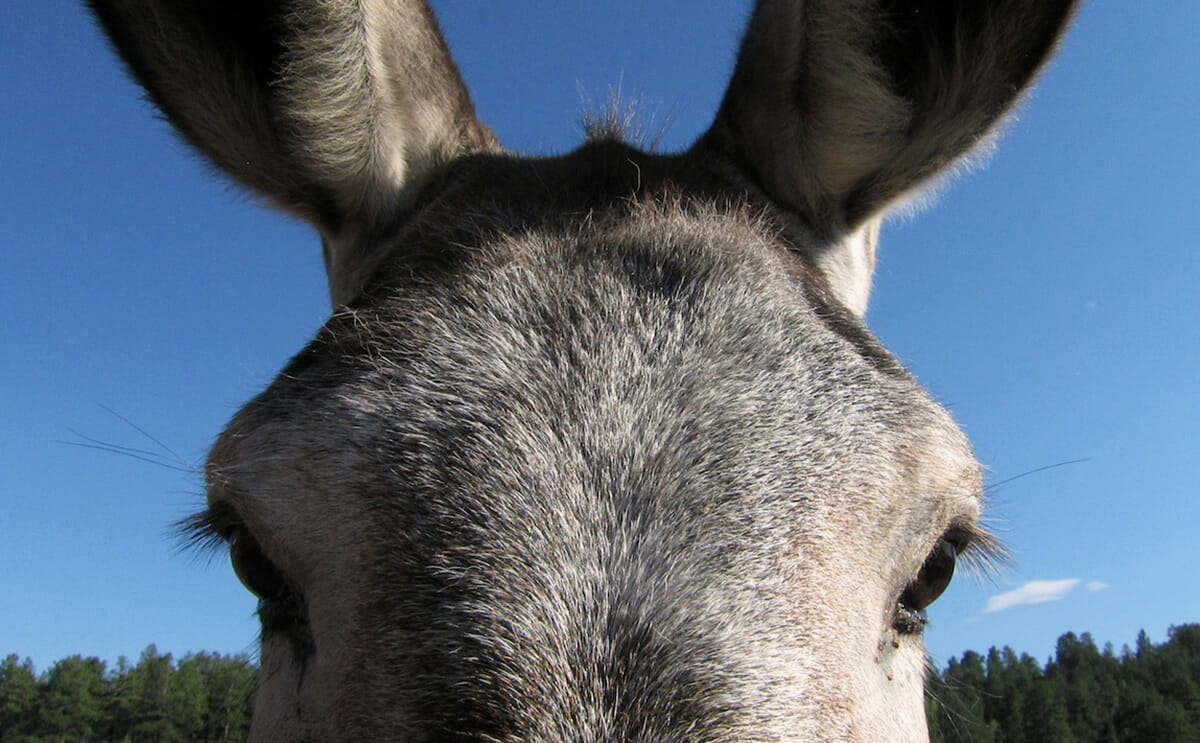 My odyssey into the world of pack-burro racing began 34 years ago with a phone call. The voice on the other end was pack-burro racing legend Curtis Imrie, whom I’d met through a running friend, asking me if I wanted to go for a training run with his burros on the upper stretch of the World Championship Pack-Burro Race course in Colorado. I told him “no thanks,” but he said to call if I changed my mind.

I hung up the phone and thought it over for a few moments. Then I called him back.

That quick and reckless change of heart changed my life forever. In the years to come I’d train many burros, some of them wild. I’d win several world championships on that course. More importantly, I’d establish a ranch-based lifestyle, cultivate some of my closest friendships and relationships, and learn more about myself, other people and animals than I could have ever imagined.

What was it about that first outing that captivated me? It helped that the weather was perfect. Most of the day was spent above timberline, that line of demarcation where the high-altitude environment is simply too harsh for trees to exist. It was a day filled with clear blue skies, crisp thin air, sparkling reflections off snow banks that lingered right on through July, and clear cold snowmelt that poured over the rocks seeking out the rushing streams.

And the burros! These wonderful animals. I loved how they moved through that high-mountain environment, smoothly and comfortably, confidently yet cautiously. It was as if they could channel the collective consciousness of the hundreds of burros who had already passed this way before them.

The sport of pack burro racing began in 1949, just a little more than a decade before I arrived on the planet. With mining on the wane, promoters in the mining towns of Fairplay, Colorado, and the nearby Leadville saw a way to parlay local legend – in this case, miners racing with their burros from the surrounding hillsides back to the courthouse to file a claim – into economic development. As a tourism attraction, they masterminded a race that was 23 miles from Leadville over 13,187-foot Mosquito Pass to Fairplay. Over this course, participants would race burros loaded with packsaddles that had to weigh 33 pounds and contain a pick, pan and shovel. The burros could be led or driven with a lead rope not to exceed 15 feet in length. No riding was allowed.

And from that first race with those basic rules and a $500 prize from the Rocky Mountain News, a sport was born, complete with its own culture and history. Today there are commonly as many as a half-dozen of these events in Colorado each summer, including a “triple crown,” which comprises a 29-mile World Championship course in Fairplay, and a 20-mile course in Leadville, both of which reach the summit of Mosquito Pass; plus a 16-mile course in Buena Vista. (We’ve had races in New Mexico and Arizona but currently there are only races in Colorado.)

Each of these courses offers up high-altitude scenery with healthy helpings of True West adventure. Over the years I’ve been frosted by summer snow and pelted by hail. I’ve run through heavy rain, blazing heat and I’ve prayed through many a lightning storm. I’ve experienced the many extremes and vagaries of equine nature. The rugged and rocky terrain is unforgiving, and I’ve been fortunate enough to survive some tremendous spills without serious injury.

I’ve been running in pack-burro races for about half of the sport’s existence and have been witness to a transcendence of sorts. While the sport was fairly esoteric in those early years, today it has been popularized by mainstream media, a documentary film on the sport called “Haulin’ Ass,” and the recent designation by the Colorado Legislature as the state’s official “Summer Heritage Sport.”

Today’s starts are perhaps some of the most “Western” in my personal experience – think rugged – with twice as many entrants, many of them neophytes who are reinventing the sport with their own experiences and adventures.

Pack burro racing is very, very difficult: longer than a marathon, over rough terrain and, of course, with a donkey. In those first races, I was happy to just finish. In fact,in my first race, I finished dead last, earning the “Last Ass Over The Pass” trophy. I had run a marathon and several shorter races, but the burro courses are so rugged and so long, and the challenge of training both myself and a large animal to finish was immense.

The races traditionally paid prize money to 8th place, and eventually I found myself finishing “in the money.” From that perspective I could see the winner’s circle, but it would take 18 years, three burros – Moose, Jumpin’ Jack and Clyde – and a multitude of hardships before I put together a championship run.

In 1998, after several second-place finishes at Fairplay, I finally put it together with a burro named Spike, who after 29 miles nosed out Oscar and runner Rob Pedretti by one second, right at the finish line. There had been many people in the burro-racing crowd who believed I would never win a championship. I took it upon myself to prove to them all that it was no accident: Spike and I won again in 2000, 2003 and 2004. In 2005 and 2007, a burro named Laredo took me over the top.

Time takes no prisoners, and the decline seemed inevitable. Over the next few years I experienced many disappointing finishes. I felt like I still had a race in my legs but Spike and Laredo had clearly lost a step, and at my age if I wanted to win again I would need a burro that could help me see beyond my own limitations.

Once again, Curtis Imrie contacted me. This time it was by Facebook rather than land line, and the message was just three words: “Boogie for Fairplay.”

At first I wasn’t sure about this burro, whose full name was Full Tilt Boogie. Although I’d had been beaten by her a number of times in shorter races, my confidence in her wasn’t high. She was no spring chicken herself, plus, she was a jenny and only one jenny had ever won in the 65-year history of the race.

One fall evening I drove to Curtis’ ranch near Buena Vista and brought Boogie back to my ranch. Over the next several months we’d have many adventures training. She was at once a conundrum of talent and mischief, large for a donkey (14 hands or about 4′ 8” at the withers) and 1,000 pounds. But I found I was still quick enough to anticipate her antics, and fit enough to steer her back on course.

It rained most of the night before the race. As I drove to Fairplay that morning the clouds were hanging tight to the mountains and Mosquito Pass was completely shrouded in black. I wondered what I was doing there. As I prepared for the start in the sprinkling rain I felt totally discombobulated. Even my socks seemed to not be fitting right. When I arrived at the start I didn’t have my race number and a race official issued another one to me.

Then the gun fired and we were off.

Pack-burro racing is a lot like life – it’s not a matter of whether something will go wrong but rather how you handle what goes wrong.

Boogie is a steady soul and the start to this race was no different. We gradually worked our way to near the front of the pack of 52 teams and then just watched. Last year’s winner George Zack – several years younger and a much faster runner – was already vying for the lead with his burro Jack, and I was having a sock problem. Pack-burro racing is a lot like life – it’s not a matter of whether something will go wrong but rather how you handle what goes wrong. My right sock had slipped down the ankle and was bunched underneath the arch of my foot. For some reason I had put a spare mismatched sock in my saddle bags and I found an opportune moment to grab it and put it in my shorts pocket. A couple miles later at a water stop I pulled Boogie up and managed to remove the one sock and quickly put my shoe back on, losing several places in the process. We caught back up to the lead pack over the next couple miles.

At the next checkpoint I stopped and quickly put the fresh sock on the sockless foot. Four teams were now jockeying for the lead, but soon George and I were able to pull away as the climb grew steeper. On the Mosquito Pass summit the wind was howling out of the gray. After circling the marker at the top I stopped and removed the other failing sock and knew I’d have to run the 15 miles back to town without a sock on that foot.

We were now 20 miles into the race. I felt as though I was running on the edge of my capabilities. Boogie held to her big smooth trot towing me psychically along. Whenever George would pull away I would dig deep within and run on. I kept telling myself that I could not let up, could not let him go. Not this time.

By the final stretch, neither burro seemed willing to leave the other. At one point George pulled ahead and Jack simply put on the brakes. Boogie stopped. George turned to me and opened his arms. We embraced as friends then continued on as competitors.

Faster and faster, we careened toward the finish line. Then just a few feet out, Jack cracked under the pressure and veered left, almost into the crowd. As George scrambled to collect Jack, Boogie seized the moment. I saw her ears go forward and she bolted for the finish. I knew even before she got there that we had won.

At 53, I had accomplished with Boogie the improbable. I was now the oldest person in history to win a world championship in pack-burro racing. As ever, though, the credit only goes partially to the human half of the team – the real champion was Full-Tilt Boogie, assuming her rightful spot in the history and lore of this amazing sport.