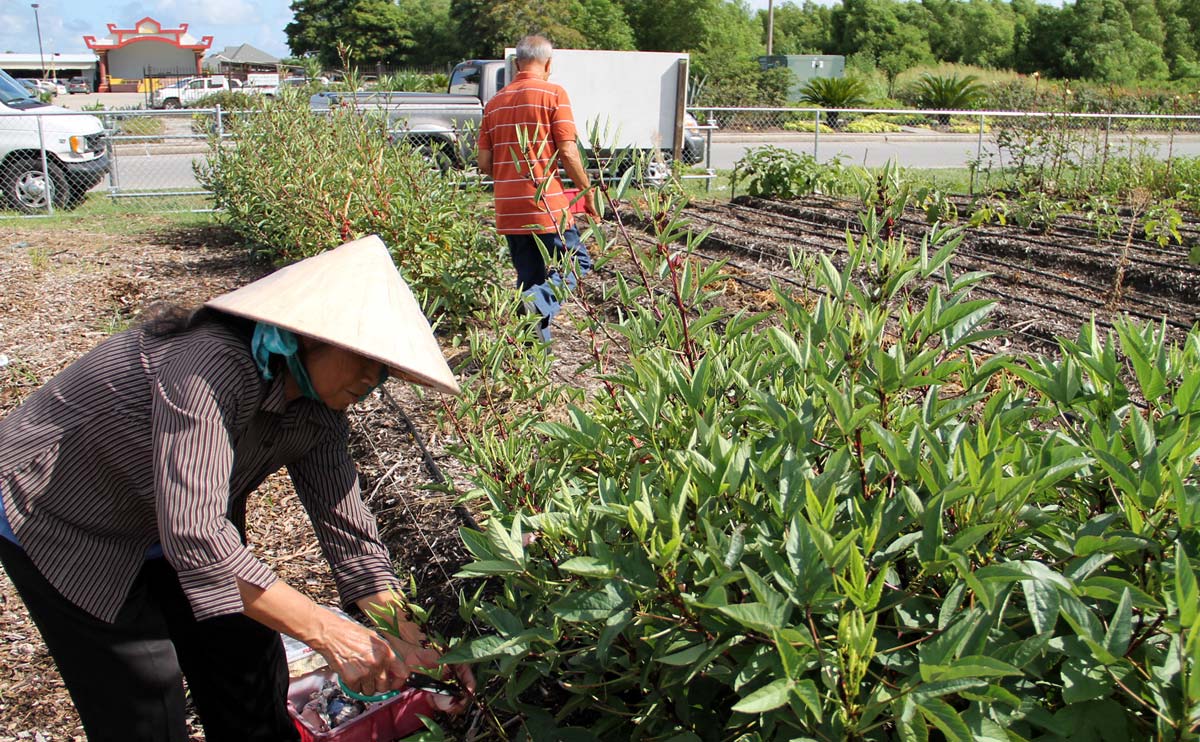 ThÄƒm and her husband, Thanh, are members of the VEGGI (Village de l’Est Green Growers Initiative) Farmer’s Cooperative, a group of urban farmers that aims to increase local food access, create quality and sustainable jobs, and promote sustainable growing practices in their community.

In their New Orleans East neighborhood of Village de l’Est, Asian-style facades and bakeries making bÁ¡nh mÁ¬ supplant seafood shacks selling po-boys. Gardening has always been popular in this enclave, with many residents being immigrants from small farming and fishing villages in Vietnam. Following Hurricane Katrina, though, many residents started growing food to compensate for the shuttered supermarkets in their severely damaged neighborhood.

Following Hurricane Katrina, many residents started growing food to compensate for the shuttered supermarkets in their severely damaged neighborhood.

ThÄƒm recalls how she and her husband stayed with a son in Dallas following the flood but doesn’t seem particularly upset about it. Of course, it’s not surprising that she mentions the flood so casually ”“ it’s not the first time their life has been upended. The Nguyá»…ns fled their war torn homeland in the ’70s, and briefly moved to Iowa after staying in a camp in Arkansas before eventually settling in New Orleans East to work in the seafood industry.

As retirees, the Nguyá»…ns weren’t really impacted by the BP oil spill in 2010. Many of their neighbors, though, found themselves without work when several fisheries closed following the disaster just as the community was recovering. In response, many residents increased their farming production to generate supplemental income. One backyard farmer discovered that Thai basil was in demand at upscale New Orleans restaurants. But then others started growing the crop, which significantly decreased its value.

The oil spill spurred Daniel Nguyen (no relation), a young transplant from California, to volunteer at Mary Queen of Vietnam Community Development Corporation (MQVCDC), an organization originally established to aid community members after Hurricane Katrina. He conceived of a cooperative to reduce the competition between the farmers. The members would collectively decide what to grow based on the success of past crops, consumer demand and what the farmers like to eat and grow.

At first, some of the farmers bristled at the cooperative jargon “due to residual experiences with cooperatives in Vietnam, where they were rigidly State-run and lacked transparency,” explains Daniel. But today the group’s twelve members are farming in their backyards and on land across from the Mary Queen of Vietnam Church, the spiritual anchor of the community. Besides produce, they also sell products like honey, homemade tofu, soymilk, and a handcrafted mesclun salad mix composed of twelve different kinds of greens. The members are now comfortable participating in this democratically, member-run cooperative that has decreased individual operational costs by overseeing production coordination, seed distribution, and delivery. Belonging to the cooperative has also helped these mostly Vietnamese speaking farmers bridge the language barrier and gain access to larger markets for their products. Their customers now include several area businesses like the New Orleans Food Co-op, the Besh Restaurant Group and others.

Michael Doyle, chef and owner of Maurepas Foods, recalls finding Daniel at the kitchen’s back door with herbs and salad greens about a month after the restaurant opened. Vietnamese cuisine is renowned for its emphasis on a huge variety of herbs, which fits Doyle’s cooking approach.

‘The food that we make here is very herb dependent so the care that’s taken with the herbs they provide is key to making sure we’re executing what we intend.’

“The food that we make here is very herb dependent,” Doyle says, “so the care that’s taken with the herbs they provide is key to making sure we’re executing what we intend.” A year and a half later, he continues to depend on VEGGI for specialty items like winter melons, dragon beans and jade gourds. Doyle also serves a salad dish made almost exclusively from their ingredients.

Although the co-op has tripled its output every year, production barriers remain one of their greatest challenges. “It’s growing pains,” says Daniel, “We’re trying to establish infrastructure.” VEGGI has been raising money to build an adequate irrigation system, but they’re currently pumping water from a fire hydrant. The hydrant meter is heavy, inconvenient and expensive (their first meter was already stolen). Swampy New Orleans has experienced unusually dry weather this summer, and “it’s exacerbated by the fact that we don’t have water,” adds Daniel, “We’re hoping fall will be better for us.”

The group is also struggling to meet demand for more land. They’re currently collaborating with another Vietnamese-American community in rural Acadiana Parish, west of New Orleans, in search of larger tracts of land. “Out there, we’re talking about hundreds of acres,” explains Daniel, “You can really turn it into something commercially viable.”

The idea of “closing in the loop” appeals to VEGGI, and securing more land will let them pursue composting on a larger scale. They’re already dabbling in aquaculture and animal husbandry with rabbits and ducks, and future plans include establishing a low-income or free CSA and building a produce processing facility with sinks and refrigeration.

VEGGI has also started collaborating with groups from around the country. Danielle Ngo, a student at the University of California at Berkeley, spent ten weeks living in Village de l’Est and interning with the group. As part of the Magnolia Project’s dedication to serving Gulf Coast communities, she worked on a collaborative field study on three different composting methods.

Ngo had never visited the South before her internship, but she’s returning to California with the following impression, “I love it, it’s a really unique environment because there’s a pervasive culture. People have here are really easy, welcoming and kind.”

Danielle’s internship has also given her an opportunity to practice her Vietnamese language skills. Back at the VEGGI office, she summarizes a discussion between Daniel, ThÄƒm, Than and a few other co-op members gathered around a laptop. The group reviews their seed orders for next year, playfully teasing each other while debating what grew best during the past year. To stay successful, their seed orders are of course determined by what their customers want, but there is still room to grow what the farmers like to eat. Thai roselle will surely be on the seed order, too.