On the curious incident that stunk up a Vermont town. 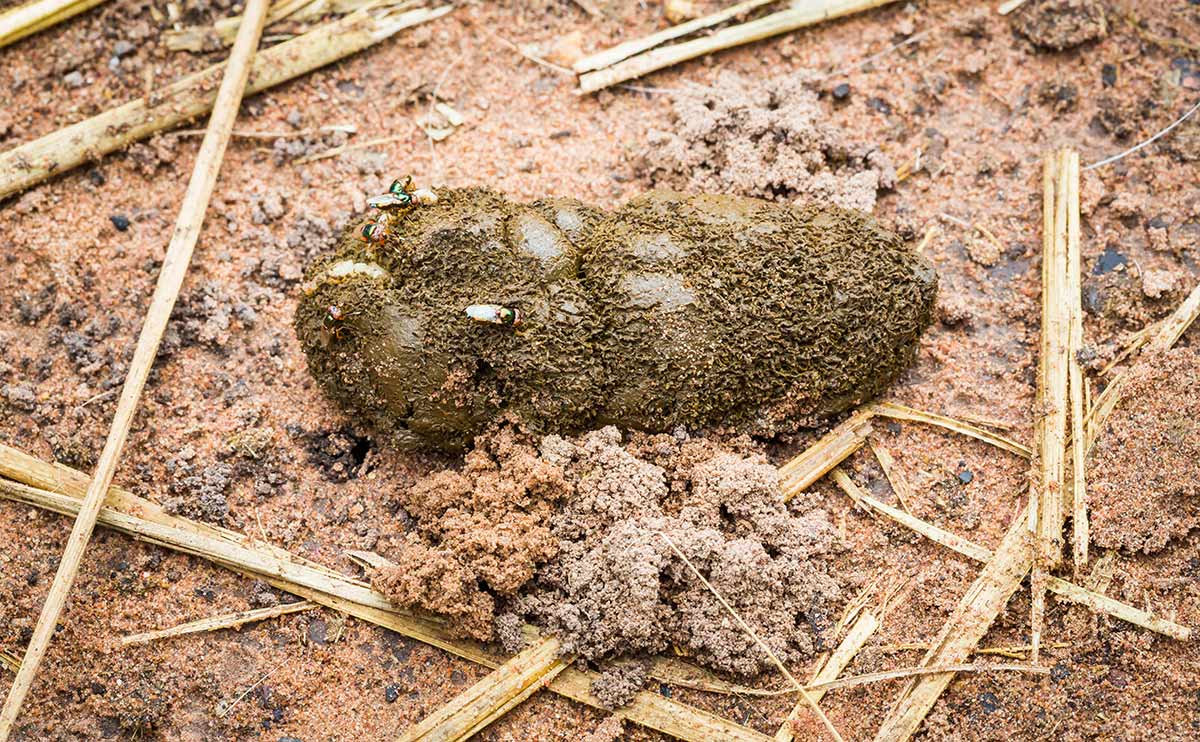 It all started with a 3 a.m. visit to a goat barn.

In the pre-dawn hours of August 22, an employee of Oak Knoll Dairy farm stopped by to check on one of a handful of structures holding the farm’s 800 goats. This particular barn was filled with pregnant goats and kids, and happened to be next to a concrete building stacked high with manure. Dealing with the ever-growing piles of manure is obviously a design challenge for any goat farmer and Windsor’s partial-solution was to house the stuff in a little outhouse slightly downhill from the birthing barn. Inside the concrete building, though, the goat manure kept rising, up to its 20-foot-tall ceilings, taking up around 120 cubic feet of space.

But the farm worker didn’t smell goat dung – she smelled smoke. She woke up farm owners George Redick and Linda Renbo, his wife, and the blaze got hosed down. The Fire Department also came to inspect. Soon, residents all over the Vermont hamlet were talking about the peculiar smell. The incident made international news, as people took to Facebook to complain bitterly about the noxious odors. The town manager likened it to “a damp kind of burning leaves or brush fire” (it “wasn’t like a whiff” either) while another townsman said it smelled like bacon.”Because there was no wind, and because there was a foggy morning, it just permeated the town,” said Redick, before adding, “certainly not as bad as green cow manure in the spring.”

Redick’s first reaction, though, was “oh no, not this again.” Welcome to one of the strangest hazards of working with farm animals: spontaneous manure combustion. 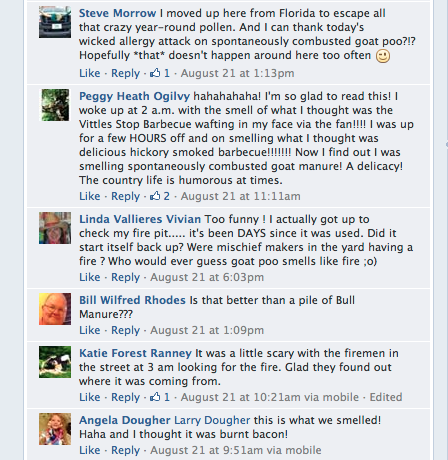 Typically one hears about spontaneous combustion in terms of “spontaneous human combustion,” which, according to to fire expert Angelo Pisani, is a myth (“you know that, right?”) But spontaneous combustion itself is very real, and can have multiple causes. In the case of the goat manure, it’s a bacterial thing: the bacteria in the animal droppings multiply, create heat, and in the pile, it gets hotter and hotter. Get some oxygen in the mix and it can ignite. Eventually, smoke starts seeping out. “Every fuel has a different ignition,” says Pisani, guessing that goat manure would be between 200-300 degrees. While this kind of fire is rare in cities, Pisani says it’s “fairly common” in farmland. “If people don’t pay attention to how they are storing [manure], it combusts,” he says, noting that another common spontaneous combustion occurs in manufacturing, with lynseed oil. When people leave rags with that oil in a pile, they can start a fire. (Fun fact: if you leave cloth with olive oil in a dryer for too long, that can also spontaneously combust.) 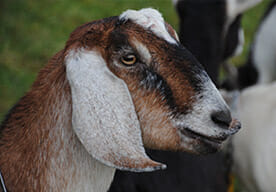 Good statistics on incidence of manure’s fire-starting capibilities are hard to come by, although some huge fires have come from sitting dung. In 2007, for instance, a 200-acre California blaze got started from manure and in 2009, manure sparked another California fire, this time encompassing over 6,000 acres in Ventura County. Far more common, though, according to Redick, are small piles that emit smoke and are quickly put out. In his experience, manure spontaneous combustion is a bit of a joke – the kind of thing a farmer would claim if he accidentally burned down a barn because of some other, more human error. “To be honest, it happened a year before as well,” he said, referring to a fire in the concrete building, “and didn’t bother any one.” He termed the fire department’s decision to put it out a “political” choice, since last year, they just let the fire burn out itself.

Not that Redick really minds the attention his goat manure fire has brought his farm. In addition to giving interviews to everyone from the local paper to the Associated Press, Redick proudly recounted being an answer on a recent episode of NPR’s “Wait, Wait… Don’t Tell Me!” “We make goat milk and yogurt but we can’t afford advertisements. As my sister’s boyfriend said, ‘You should milk this for all its worth,'” the goat farmer said, laughing.

Still, though, some changes have been made. The concrete manure shed has been dug out, excavated. It took more than a week to put out all the little goat dung spontaneous fires.

An earlier version of the story misidentified the name of the goat farm.