Gators and Rattlers and Buzzards and Boars: The Wild Side of NASA's Campus - Modern Farmer
Animals, Lifestyle, Plants

Gators and Rattlers and Buzzards and Boars: The Wild Side of NASA’s Campus

With the ease of say, New Yorkers griping about train delays, NASA employees discuss encounters with boars and bald eagles, raccoons and rattlesnakes, bobcats and buzzards. It's a wild place. 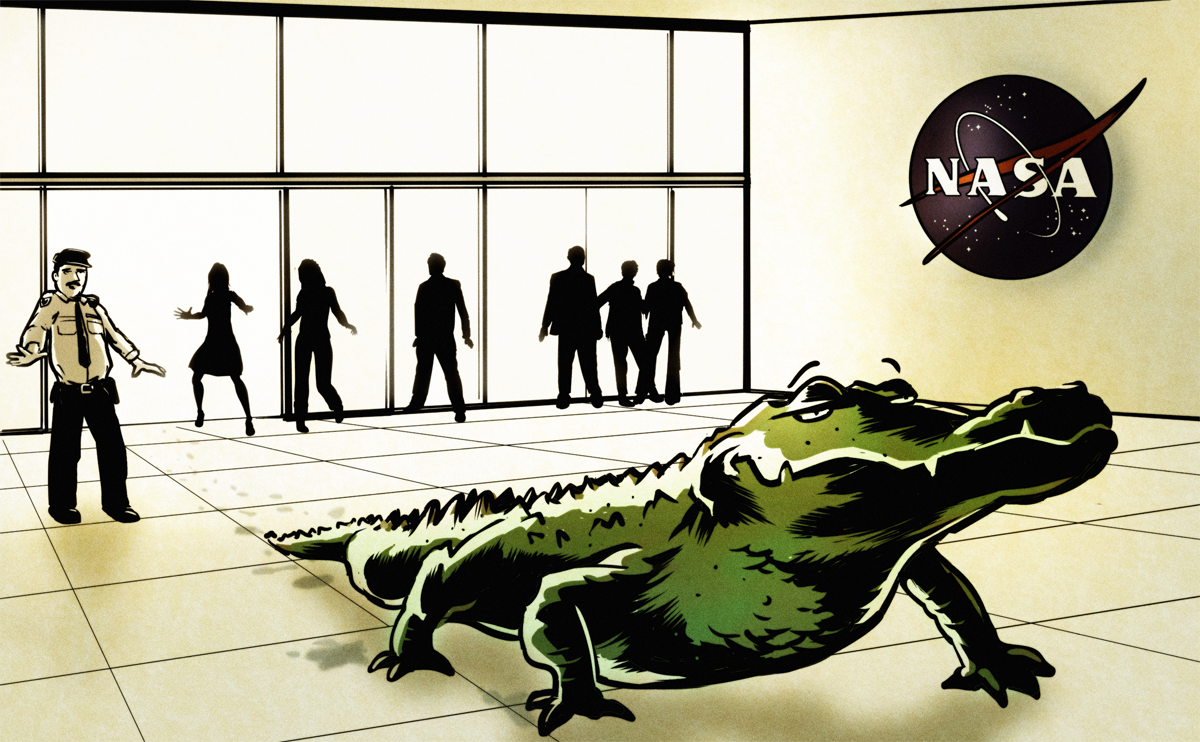 But the oddest part of the encounter? At NASA HQ, this type of thing happens all the time.

When Modern Farmer visited KSC for our story on space farming, we overheard some weird water-cooler talk. With the ease of say, New Yorkers griping about train delays, NASA employees discuss encounters with boars and bald eagles, raccoons and rattlesnakes, bobcats and buzzards — you get the drift.

‘We’ve got gators blocking doorways, hiding under cars, climbing fences. We’ve got little-bitty ones to sure enough big gators. Sometimes we find them on the fringes, eating people’s dogs.’

“Nobody really freaks out,” says Gerard Newsham, NASA research scientist. “All these animals come with the territory.”

In the ’60s, NASA bought 145,000 acres of coastal Florida property — but only needed 6,000 for the space program. They wanted to keep the rest undeveloped, an effort to spare human lives if a spacecraft crashed. The surplus acreage became a sanctuary called the Merritt Island National Wildlife Refuge. And deep inside its teeming, semi-tropical core, NASA built a bright, sprawling campus of labs and admin buildings.

It’s like putting an office park in the Amazon, a surreal intersection of the primal and the modern. Morning commuters wait as bobcats cross the roadway. Shuttle launches are stalled by armadillos. Woodpeckers poke holes in fuel tanks. To be fair, most of the animals live their lives peaceably while NASA goes about its business.

Pound-for-pound, gators are far-and-away the biggest nuisance at the space center. “Most of our calls are alligator calls,” says Ralph Lloyd, Merritt Island’s deputy refuge manager. “We’ve got gators blocking doorways, hiding under cars, climbing fences. We’ve got little-bitty ones to sure enough big gators. Sometimes we find them on the fringes, eating people’s dogs.”

Incredibly, only a handful of humans have been bitten on KSC property; Lloyd says these gators are typically “provoked” in some way. NASA employees are cautioned to keep alert when outdoors (occasionally inside, too), and never feed the alligators. Also, check under your vehicle before getting in.

LaShelle McCoy, a NASA scientist, was working out at the space center gym when somebody made an announcement: “If anybody has a Jeep in the parking lot, there’s a gator underneath it.” Everyone ran to the plate-glass window and saw a huge alligator in a struggle with the gym security guard. “The guard said ‘Hi-Yaaaa!!!’ and made chopping motions,” McCoy says. “The gator hissed and spit but eventually went away.”

McCoy used to take midday strolls down a trail near her building. One day during lunch, she was walking with some co-workers. They turned a corner and boom: On the middle of the trail was an eight-foot diamondback snake, thick as a forearm, rattling and hissing. They backed away slowly, and no one was hurt — but that marked the end of the nature strolls.

Rattlesnakes are a scary nuisance at KSC. While they’re not as prevalent as gators — Lloyd says he only gets a few snake calls each year — they may be even more dangerous. He recently was called to the Vehicle Assembly Building (where shuttles are built) to remove a big diamondback from under a piece of aluminum. A worker had lifted up the metal to lay some electrical cable, inadvertently poking the snake in the process. “You’ve got a scared guy, and you’ve got a snake that’s hopping mad,” says Lloyd. “Not a good situation.”

This week, a fearless frog made headlines after it rocketed into the great beyond during a the launch of a lunar robotic probe (though this happened at the Wallops launch site, not at KSC). In 2009, a bold bat was similarly glorified. Everybody loved the bat and the frog, but nobody sings folk songs for this poor buzzard:

After that buzzard (in this case, a turkey vulture) plummeted to the Earth, NASA instituted a serious vulture eradication program. The centerpiece of this plan? To remove KSC’s 1,000 pounds of roadkill each month, thus decimating the birds’ food supply. Lloyd says the program wasn’t too effective — buzzards get into the Vehicle Assembly Building all the time, a major hassle to remove. They also love attacking people’s cars, eating insulation, gaskets and the rubber lining that surrounds windshields. “I have absolutely no idea why they do that,” says Merritt Island refuge manager Layne Hamilton.

Like much of Florida, wild pigs are deeply entrenched in KSC property. They’re a nuisance — destroying lawns and flower beds and freaking out tourists at the visitor’s center — but a nuisance that can’t seem to be stopped. Hamilton says their trappers kill upwards of 2,500 wild pigs every year.

Car accidents are the biggest pig problem at the KSC: Lloyd says at least one vehicle a week is wrecked. “These days, you’ve got these itty-bitty cars, they’re liable to just flip right over when you hit a hog,” says Lloyd. “It’s a real concern.”

With all the wildlife roaming NASA’s spaceport, it’s understandable why astronauts are so eager to take off. Shuttle launches are dangerous, and space is a deadly cold vacuum, as inhospitable a place as exists in the universe.

But at least there’s not gators.

Editor’s note: An earlier version of this story stated that an unfortunate amphibian was in the news after being photographed caught in the blast of a shuttle launch. It was actually the launch of launch of a lunar robotic probe from a Minotaur rocket. We regret the error (and still feel terrible for that poor frog.)

Editor’s note: An earlier version of this article also failed to make explicit that photograph of the aforementioned unfortunate amphibian was photographed during takeoff was not taken at Kennedy Space Center, but at the Wallops launch site in Virginia. We regret the error (and, once again, feel very badly for the frog. Mourn ya til’ we join ya, lil’ buddy.)