Whey Too Much: Greek Yogurt’s Dark Side

The Greek yogurt boom has produced an unfortunate byproduct: tons and tons of whey. 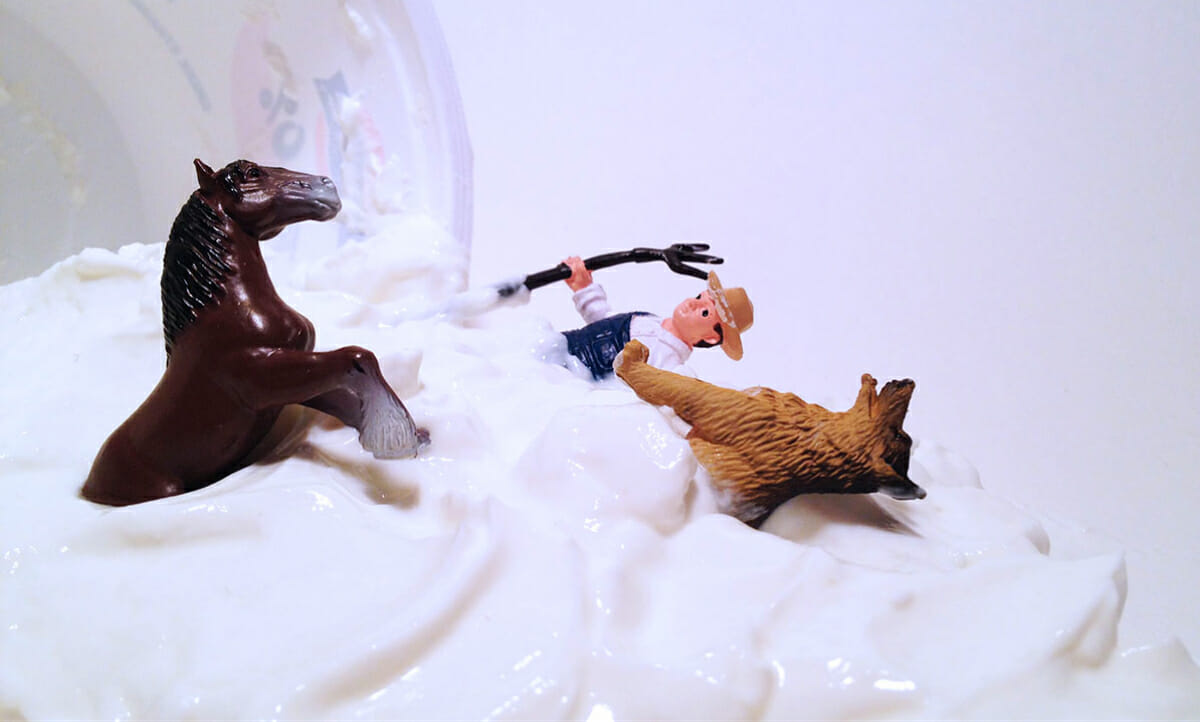 For every three or four ounces of milk, Chobani and other companies can produce only one ounce of creamy Greek yogurt. The rest becomes acid whey. It’s a thin, runny waste product that can’t simply be dumped. Not only would that be illegal, but whey decomposition is toxic to the natural environment, robbing oxygen from streams and rivers. That could turn a waterway into what one expert calls a “dead sea,” destroying aquatic life over potentially large areas. Spills of cheese whey, a cousin of Greek yogurt whey, have killed tens of thousands of fish around the country in recent years.

The scale of the problem – or opportunity, depending on who you ask – is daunting. The $2 billion Greek yogurt market has become one of the biggest success stories in food over the past few years and total yogurt production in New York nearly tripled between 2007 and 2013. New plants continue to open all over the country. The Northeast alone, led by New York, produced more than 150 million gallons of acid whey last year, according to one estimate.

And as the nation’s hunger grows for strained yogurt, which produces more byproduct than traditional varieties, the issue of its acid runoff becomes more pressing. Greek yogurt companies, food scientists, and state government officials are scrambling not just to figure out uses for whey, but how to make a profit off of it. 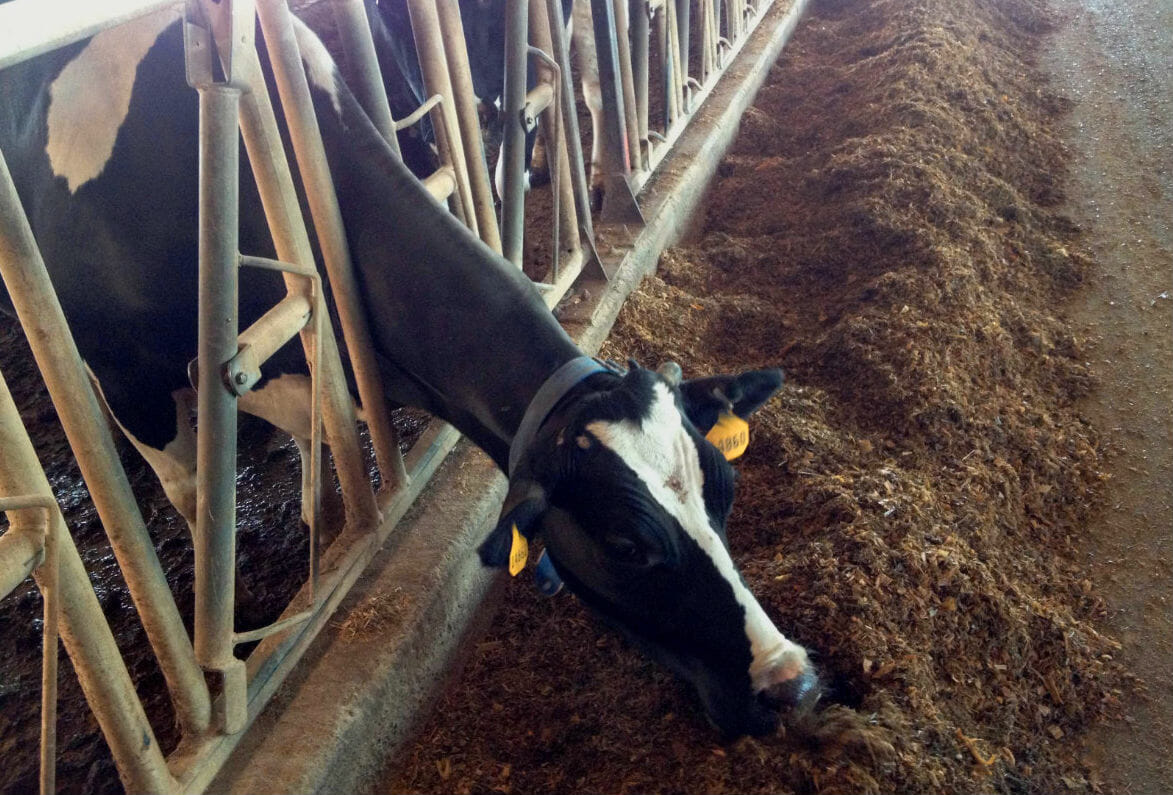 A cow munches on feed mixed with acid whey.

Chobani is so desperate to get rid of the whey, they pay farmers to take it off their hands.

Rejman, a blonde-haired 37-year-old, and third-generation dairy farmer with a Cornell animal science degree, started accepting the stuff a few years ago after a Chobani representative called him out of the blue.

Rejman’s workers take the shipments and try to find uses for the whey: mix it with silage to feed to the farm’s 3,300 cows; combine it with manure in a giant pit for fertilizer; and even convert some into biogas to make electricity.

‘How do you handle all the whey without screwing up the environment?’

But it’s not so easy to integrate acid whey into the workings of the farm. The silage Rejman feeds his cows, for example, can only soak up so much before becoming unmanageable slop – “like dropping water on your pizza,” he says. It’s also sort of like feeding your cows candy bars – they like it, but shouldn’t eat too much or it upsets their digestive system. It’s a problem that Rejman admits defies easy solutions. “How do you handle all the whey without screwing up the environment?”

The root of the whey problem is the very process that gives Greek yogurt its high protein content and lush mouthfeel.

Unlike traditional yogurt, Greek yogurt is strained after cultures have been added to milk. In home kitchens, this can be done with a cloth. Greek yogurt companies still throw around the term “strained,” but in reality industrial operations typically remove the whey with mechanical separators that use centrifugal force.

The resulting whey is roughly as acidic as orange juice. It’s almost entirely made up of water, but scientists studying the whey say it contains five to eight percent other materials: mostly lactose, or milk sugar; some minerals; and a very small amount of proteins.

Greek yogurt companies trying to keep up with exploding consumer demand in the last few years didn’t have a good plan to deal with the ocean of whey they were producing. Now they’re racing to find solutions, all the while keeping mum about the results, if there are any: the yogurt industry is highly secretive and competitive.

There are no industry-wide statistics on where all the whey is going, but a typical option is paying to have it hauled to farms near the yogurt factories. There, it is often mixed into feed or fertilizer. Chobani, for example, says more than 70 percent of its whey ends up as a supplement for livestock feed.

But there is another possible consumer – babies.

“Because the Greek yogurt production grew so rapidly, no one really had the time to step back and look at the other viable options,” says Dave Barbano, a dairy scientist at Cornell.

Barbano, who specializes in filtration methods for separation and recovery of protein, has his sights set on the tiny amount of protein in acid whey. He believes it might be usable as an infant formula ingredient. But first Barbano has to figure out how to extract the protein in a cost-effective way, and his research is just getting underway.

The concept is roughly modeled on the success that cheese-makers have had selling products derived from their own byproduct – sweet whey. Sweet whey is more valuable and easier to handle than acid whey, as it has a lot more protein, and is easier to dry because it isn’t as acidic as Greek yogurt whey. Cheese-makers have developed a lucrative business selling whey protein for use in body-building supplements and as a food ingredient. And Greek yogurt makers are eager to follow suit.

“There are a lot of people coming in and out of New York state looking at whether this is a good opportunity for investment,” Barbano says.

While Barbano focuses on proteins, researchers in Wisconsin are studying how to extract whey’s dominant ingredient: sugar.

Scientists at the Center for Dairy Research at the University of Wisconsin, Madison, have been experimenting for nearly a year on how to get edible-grade lactose out of acid whey. Such lactose is valuable as an ingredient in things like icing and as a browning agent in bread. “It’s kind of like oil refining: from crude oil you get gas and diesel and other products,” says Dean Sommer, a food technologist at the center. “This is the same concept. You figure out what’s in there and how to grab it and get value out of it.”

Sommer wouldn’t describe the filtration process to extract lactose because the industry-financed research is proprietary. But he believes some third-party companies are now considering building plants to convert acid whey into lactose. 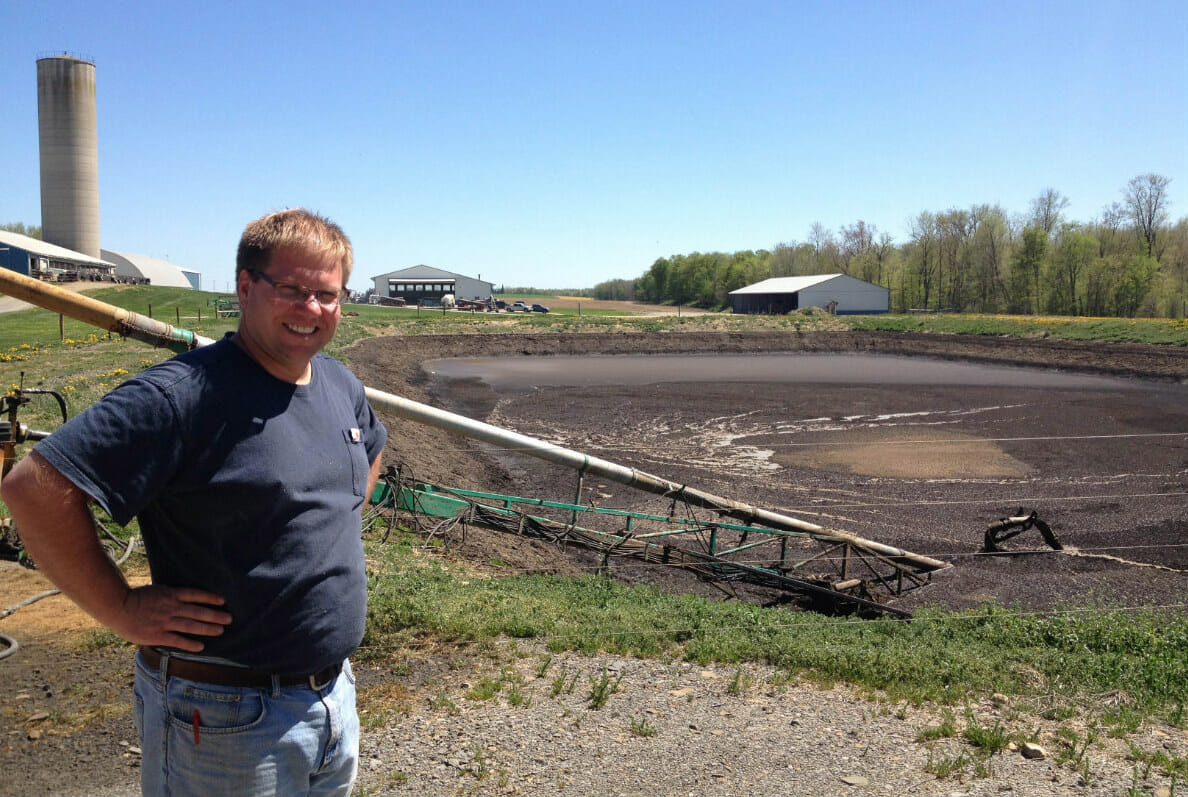 Neil Rejman, an Upstate New York dairy farmer, stands before a lagoon of manure mixed with acid whey. This slurry has passed through a system called an ‘anaerobic digester,’ which converted some of it into electricity.

Meanwhile, back at Rejman’s farm in Scipio Center, N.Y., they’re converting the lactose into methane that can generate electricity.

When the whey arrives from Chobani, some of it is mixed with the vast quantity of manure the farm produces daily. From the manure pit, the light brown soup (basically a river of shit) flows into a 16-foot-deep underground concrete tank known as an anaerobic digester. An innocent looking expanse of cement in a big, green field dotted with dandelions, there’s a lot going on inside, where a fetid mix of manure and whey percolate.

The material is heated up and kept in the tank for about 20 days, during which time bacteria break up the organic material – the lactose, in the case of whey – and release gases, including methane. The gas is fed into generators that produce electricity to power the farm and to sell to the local utility for use elsewhere.

But the setup, which Rejman and his brother had installed five years ago, required a big capital investment that would be out of reach for small farms. It cost $4.5 million, $1 million of which the Rejmans got back through a state subsidy. 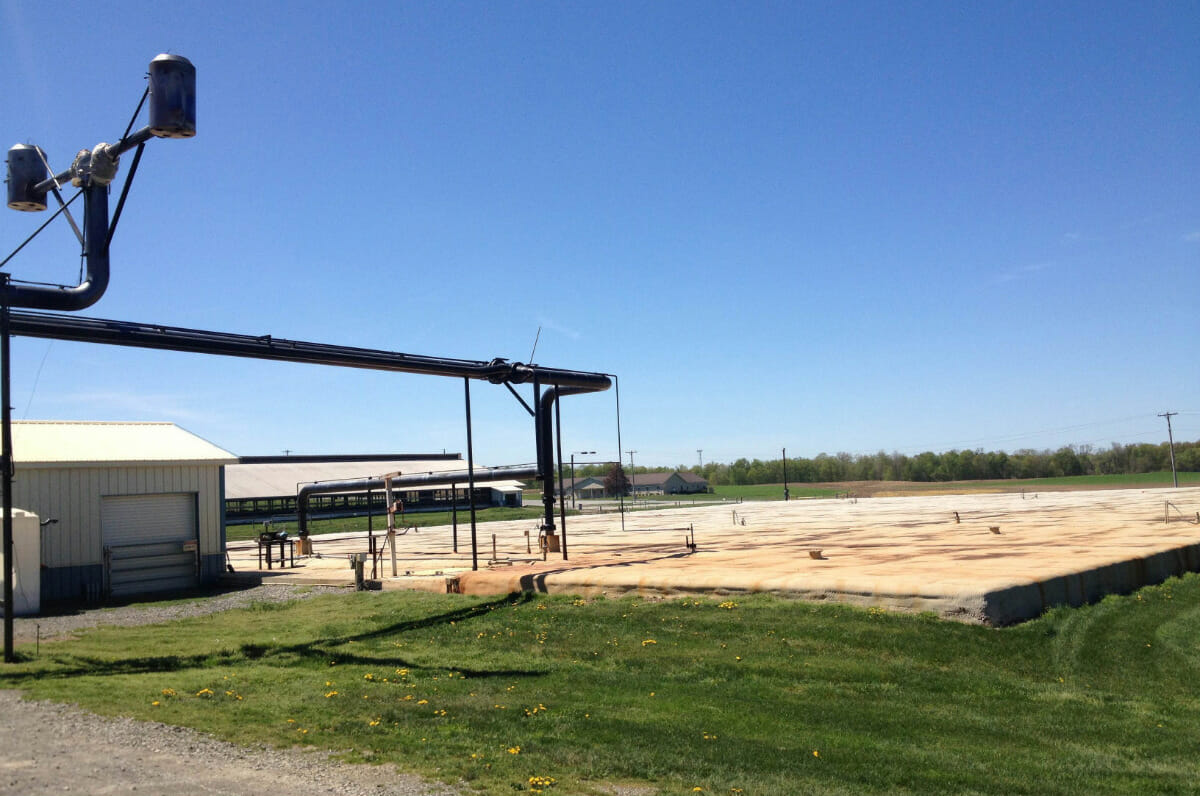 They primarily built the digester for what Rejman calls “odor control” for their neighbors, as digested manure smells much less than the raw stuff (“You ever take a shit in the toilet and leave it in there?” Rejman asks, by way of explanation.) The whey is an afterthought. In any case, just 20 of New York’s the state’s 5,200 dairy farms have an operating digester, according to Curt Gooch, a waste management engineer at Cornell.

And if any of the big yogurt companies have come up with a better whey solution, they’re being cagey about it. “We are currently exploring other options for our whey, but nothing we are ready to discuss at this time,” says Chobani spokeswoman Lindsay Kos. Dannon spokesman Michael Neuwirth says the company is looking at the nutritional possibilities of whey, but “we don’t have any plans to announce at this point.”

Home Greek yogurt makers have experimented with using whey in baking and pickling. But no one expects a bread or pickle factory to be able to absorb tens of millions of gallons of it.

Meanwhile, the tidal wave of acid whey is not slowing down. As one producer said at New York’s Yogurt Summit: “If we can figure out how to handle acid whey, we’ll become a hero.”

Thank you for this informative article as I began making my own yogurt and straining it to thicken it and wondering what to do with the one cup of whey that strains out from 8 oz of yogurt mixed into the 4 cups of the best milk I can find (5 cups of liquid- 1 cup of waste)I started making yogurt because of all those little plastic cups in the grocery store began to multiply and recycling is no longer happening like it should! great milk makes great yogurt, no sugar, no plastic! What to do with the whey was… Read more »

So after reading this just to be clear. Is Greek yougurt ok yo eat? And why or why not?
Miss spelling in last name my last name is Brantley

The information was interesting!

Why not turn it into Blaand? Or just ferment it into an alcohol to be used as fuel

[…] For every four ounces of milk used in the production of Greek yogurt, only one ounce becomes creamy goodness while the other three ounces become acid whey, according to a report published on the website of Modern Farmer. […]

[…] Acid whey became a much more well-known substance after the magazine Modern Farmer published a story in 2013 by reporter Justin Elliott called “Whey Too Much: Greek Yogurt’s Dark Side.” […]

Very interesting article about the whey.