Floating above the earth in his airplane, photographer Alex MacLean reads the landscape like no other photographer. 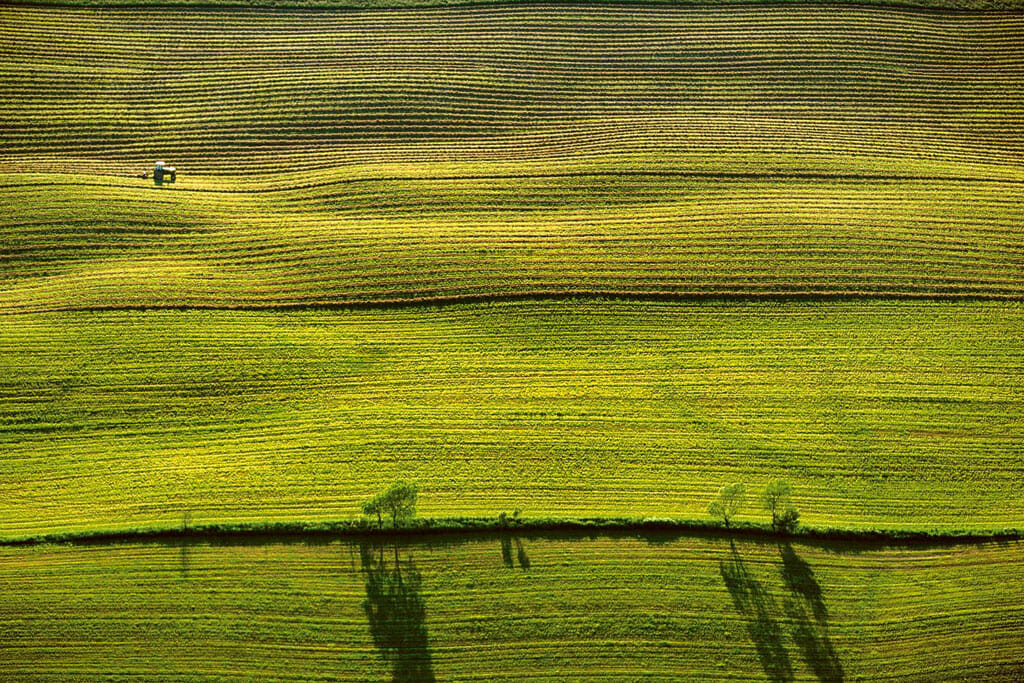 In the 1970s photography was just a hobby for Alex MacLean, an architecture graduate student at Harvard, and flying was “a great way to see the larger environment.” But after seeking out the wisdom of William Garnett, the famous California-based aerial landscape photographer (“he was really encouraging”), MacLean embarked upon a career in flight. His photography has taken him around the world where he captured, among other things, agriculture from above: colorful geometric grids, tiny cattle, a lone barn on an ordered plain.

MacLean’s real genius, as Bill McKibben noted in a 1993 New York Times Magazine story, is acting as a sociologist, showing human behavior on a big scale. “Reading the landscape is so interesting – you learn so many nuances of our way of life, how we are organized, what are our cultural values as well as physical realities,” MacLean says, speaking from his Massachusetts studio. “People settle in certain responses to the land and soil.” MacLean’s subjects run the gamut from energy infrastructure (he was excited about an Oklahoma pipeline he hadn’t seen before) to solar panels (New Jersey apparently has an incredible number of new ones) to New York City rooftops (the subject of his last book, published in 2012) to Boston’s Big Dig (“completely changed the waterfront”). Over the course of his career, he estimates he has collected a stash of 450,000 images; like his mentor, Garnett, he produces both editorial and fine-art work.

From his vantage point, MacLean doesn’t have an altogether cheery take on our food-production trajectory. “Since I’ve been doing it, one of the most pronounced changes I’ve been seeing is the consolidation of farms. I see a lot of vacant farms, buildings in the middle of these commercial fields,” he says, noting that even the fencerows – the tree-lined rows separating property – have come down to make it easier for crop-dusting. MacLean has watched big factory farms for pigs and chickens take hold, making flyover country “more of an industrial landscape.” This is all fodder for a planned book that would juxtapose the strips of fast-food lights with America’s agricultural world. “A little of the romance of the family farm is gone,” he says. Among the many problems with the homogenized landscape? “They don’t make for as good pictures,” he says.

Click left or right below to navigate through photos.

Related
Lifestyle, Plants
It’s Time For Fashion to Talk More About Regenerative AgricultureEmily Baron Cadloff
Opinion, Technology
Opinion: The Rise of Precision Agriculture Exposes Our Food System to New...Austin C. Doctor and George Grispos
Animals, Environment, Plants
Farmers’ Battle Against, and Now For, MilkweedJennifer Taylor
Opinion, Plants
Opinion: Community and School Gardens Don’t Magically Sprout Bountiful BenefitsMitchell McLarnon
wpDiscuz
We use cookies on our website to give you the most relevant experience by remembering your preferences and repeat visits. By clicking “Accept”, you consent to the use of ALL the cookies.
Cookie settings ACCEPT
Privacy & Cookies Policy