How to Transform Green Walnuts Into a Nutty Liqueur

A bartender-botanist’s guide to making nocino, a traditional Italian liqueur made from unripe walnuts. 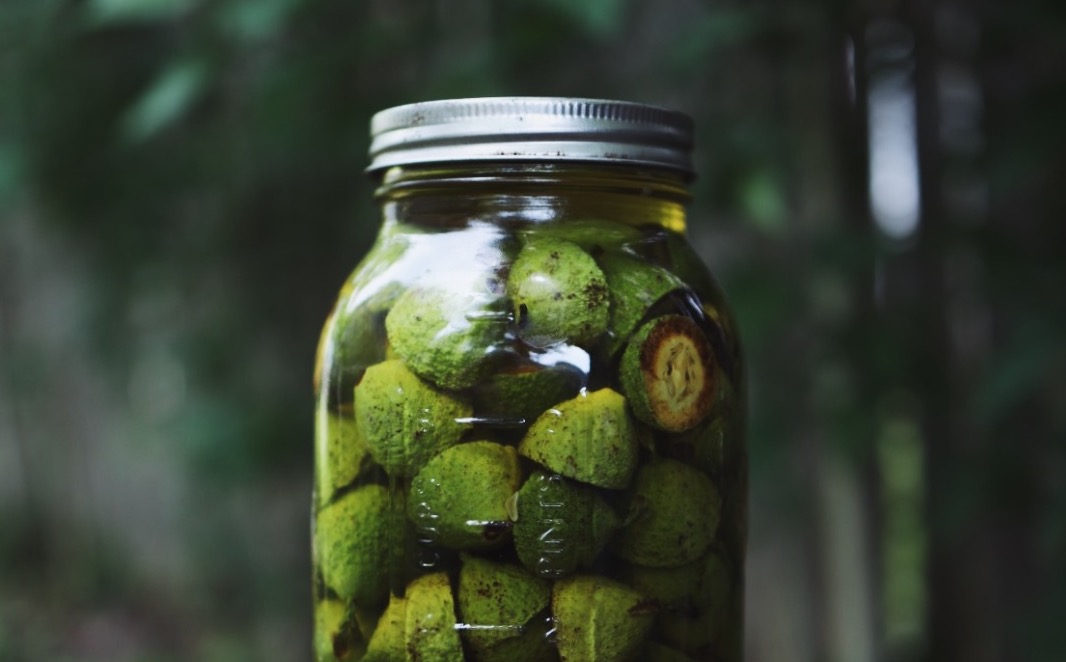 My yearly foraging schedule can be described as loose at best. It’s time to search for ramps when life returns to the landscape in the spring, elderflower season starts around the solstice, pawpaws at the fall equinox and persimmons after the first frost. My one exception to this lax approach is walnuts, which I harvest each year on June 24, when they are still in an unripe state, in order to make a green walnut liqueur known as nocino. This date is not one that I settled upon, however; this is the date that walnuts have been harvested to make nocino in Europe for millennia.

The first written account of nocino production comes from the days of the Roman Empire, when Roman soldiers learned of the practice from the Celtic Pict tribe of Eastern Scotland. Each year on June 24, during the Midsummer solstice celebrations, the paganistic Picts would harvest walnuts to infuse with alcohol for a brew that was thought to contain supernatural properties. This June 24 date was not chosen for ritual purposes, though. The Picts knew that, at this early point in the walnut’s development, the hard outer husk had yet to develop, making it significantly easier to cut through. More important is the black liquid that can be found at the walnut’s center during this young stage, which, if left unpicked, would begin to harden into the walnut just a few days later. When timed right, this dark liquid will dissolve into the surrounding alcohol and, over the course of the next six months, imbue it with its jet black color and spicy, earthy and slightly bitter flavor.

RELATED: A Botanist-Bartender’s Ode to the Dandelion

The Romans adopted the practice from the Picts and brought it back to Italy where nocino production became deeply embedded in Italian culture. According to ancient lore, Romans would send an odd number of barefooted virgins into the trees each year on the night between June 23 and June 24 to collect the walnuts. The nuts were then cut in half and submerged in alcohol to macerate until December, when the nocino was consumed during the rituals that accompanied the winter solstice. During the 4th century AD, after Christianaity was adopted as the official religion of the Roman Empire, these practices were changed to coincide with the corresponding Christian holidays of the Feast of Saint John and Christmas, respectively.

The tradition of making nocino eventually spread throughout the empire and remains intact in much of rural Europe today. In France, black walnuts are used to make the French counterpart to nocino, known as liqueur de noix, as well as vin de noix, in which the nuts are placed in red wine and result in a product that’s more similar to vermouth. In the Italian peninsula, you can still find families making their proprietary nocino (or ratafia di noci, as it’s known in the Piedmont) on the Feast of Saint John, the same way they have for centuries.

While most commercial nocinos available today are made from the European species, Juglans regia, known colloquially as the “common,” “English” or “Persian” walnut, there are many other species in the Juglans genus, which could hypothetically be used to make nocino unique to their native regions. Here in the eastern United States, where I live, and southeastern Canada, native walnut species include the prolific black walnut (J. nigra), as well as the more sparsely dispersed butternut or white walnut (J. cinerea), whose numbers have been greatly reduced in recent years due to a fungal infection known as butternut canker. As you move further west, you can find the Texas walnut (J. microcarpa), the Arizona walnut (J. major), the California black walnut (J. californica), and the northern California walnut (J. hindsii). Then there are the southern Central and South American species that stretch as fast as Argentina, and, in Eurasia, there are several other walnut species that can be found from the British Isles to Japan.

Until my dream of an international web of nocino producers is realized, I am very content making a few gallons of nocino each year using black and white walnuts that grow within walking distance of my home. I pick my black walnuts on the running trail in the town where I live in suburban New Jersey, attracting weird looks from joggers in the process. Even more odd is my white walnut foraging spot, which is located along the edge of a parking lot in a corporate office park nearby. Although it’s far from a bucolic foraging scene, it’s the only place I’ve ever found them growing around me.

Once I have a sufficient haul, I bring the nuts to The Farm and Fisherman Tavern, the restaurant where I manage the bar program, and get to work on halving them before packing them in half-gallon mason jars. From there, I cover them with New Jersey-made Devil’s Springs 151 proof vodka, put them on the shelf and forget about them until just after Thanksgiving when I strain out the nuts and subsequently dilute, sweeten and spice the liquid.

After letting it rest for an additional month, it’s ready to be shared with restaurant guests, friends and family just in time for the holidays. Nocino is wonderful on its own as a digestivo, but it can really shine in cocktails playing a supporting role to dark spirits. Try swapping it in where vermouth or amari might otherwise be used or use it in conjunction with them as I’ve done in this Black Walnut Boulevardier below. 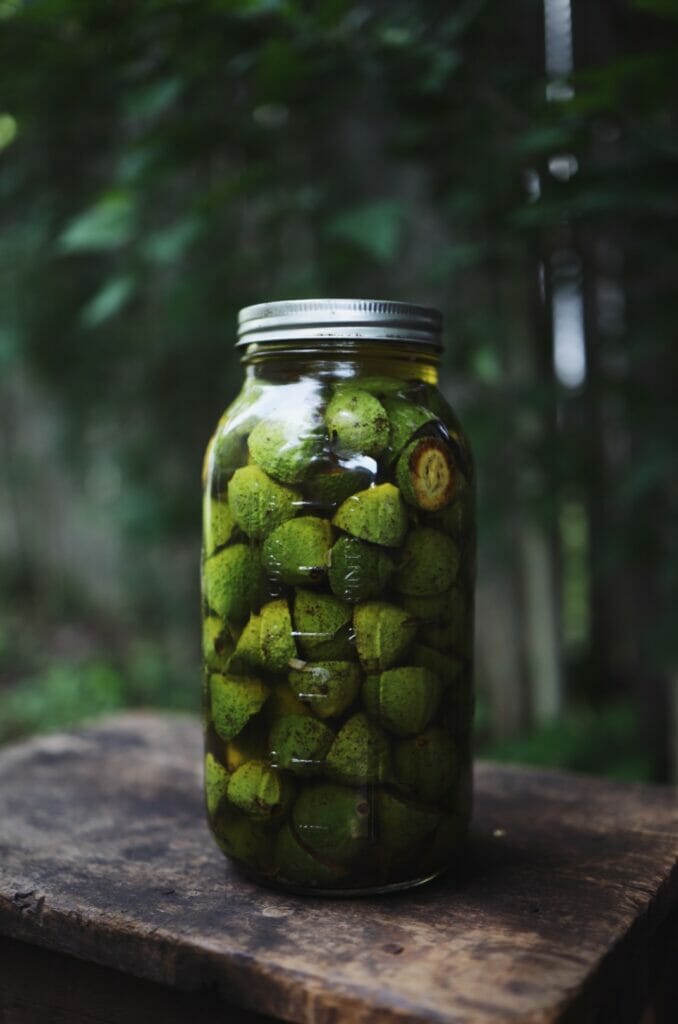 On or around the date of June 24, harvest your walnuts. That same day, cut them in half and place them in a two-quart mason jar and cover them with 151 proof vodka. Let it macerate at room temperature for approximately five months.

In late November or early December, strain out the black walnuts and reserve the liquid (should yield around four cups). Add four cups of water, two tablespoons of Angostura bitters and one cup of rich demerara syrup (recipe below). It will keep indefinitely at room temperature.

Add ingredients to a small saucepan over medium heat and bring to a low boil, stirring frequently, until the sugar has completely dissolved. Will keep up to one month in the refrigerator.

Add bourbon, nocino, Campari and sweet vermouth to an ice-filled mixing glass. Stir until well chilled and strain over a large cube. Garnish with an expressed orange peel.

Danny Childs is the mixologist behind the @slowdrinks account on Instagram and the bar manager at The Farm and Fisherman Tavern in Cherry Hill, New Jersey. Danny’s beverages embody the flavors of the mid-Atlantic by using ingredients foraged from the wild and picked from his cocktail garden. His work has led to a role on the Slow Food USA Ark of Taste committee, a 2019 IACP-nominated cocktail column, and in 2021 he was the recipient of the Philly Mag “Best of Philly” award in the cocktail category. His book, Slow Drinks, will be released with Hardie Grant in 2023.

Hi! So I accidentally left my green walnuts soaking for a year (oops) I’m processing them now but wasn’t sure if it would be worth adding simple syrup and drinking or if they’ll be too bitter?

Should I worry about adding the water too quickly? I know that whisky makers tend to proof down gradually over time to prevent saponification, but curious if that’s a problem here.