A Botanist-Bartender’s Ode to the Dandelion

From wine and mead to amaro and tonics, the spring dandelion has long been a prized plant in beverages. 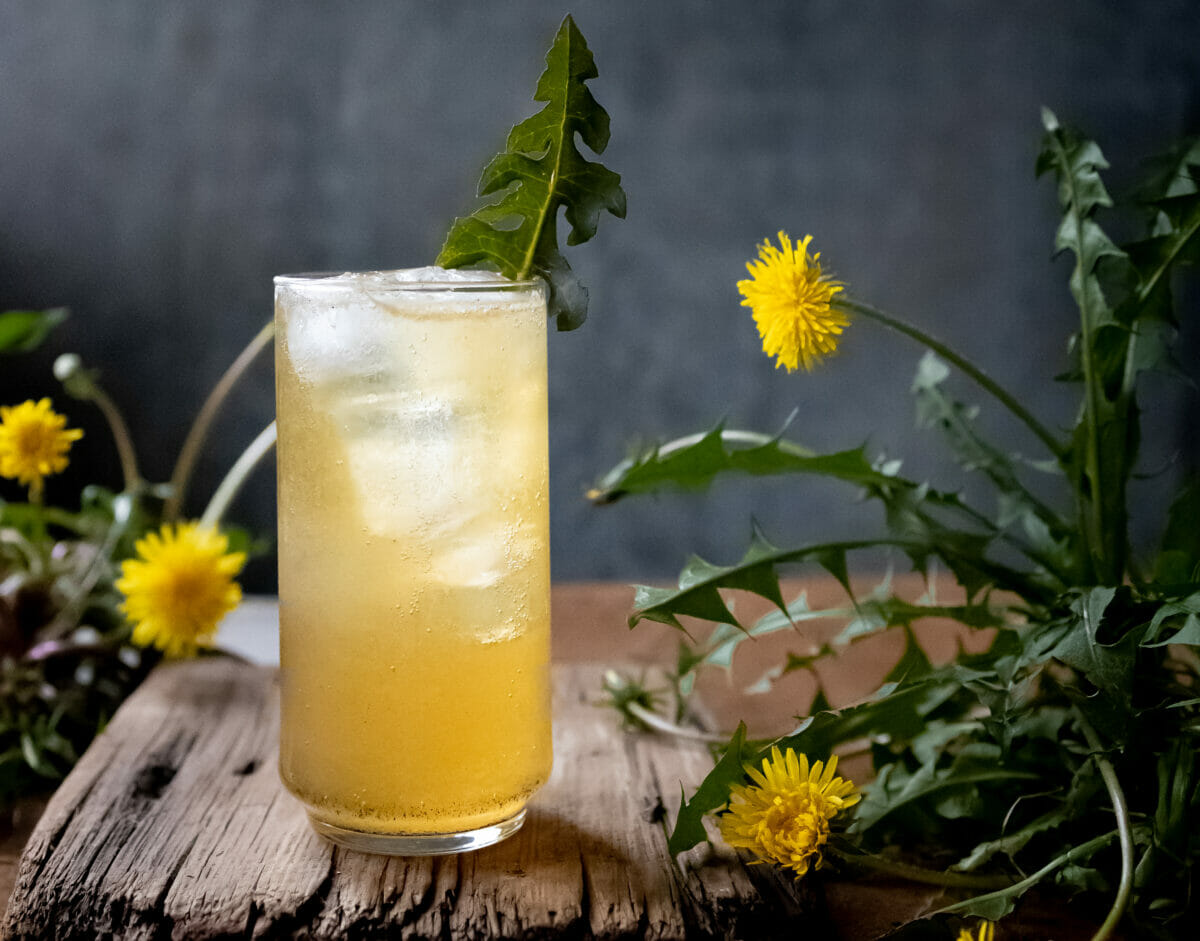 The idea of a spring tonic is one that spans many cultures throughout time. This phenomenon was partially born out of necessity, since, historically, people needed something nutritious—be it food, drink or medicine—to replenish their strength after surviving off preserves and storage crops all winter.

However, part of the appeal of the restorative powers of a spring tonic is symbolic. Consuming freshly harvested ingredients for the first time each spring is invigorating. Even the act of watching them grow is. And while we don’t rely as heavily on the larder as our ancestors once did, the symbolic consumption of a spring tonic is still an essential rite of spring observed by many. For me, there is no plant that embodies this spirit more than the dandelion, which despite its inherent beauty and millennia-long importance, is still one of the most highly contended plants today.

The dandelion genus, Taraxacum, is composed of roughly 60 species that can be found growing in nearly every corner of the globe. Its name comes from the jagged young leaves that look like lion’s teeth (dent de lion in French). Dandelion roots, flowers and leaves have been used both culinarily and medicinally for hundreds of years, if not longer. Recent scientific studies have corroborated their therapeutic potential by showing that, in addition to high levels of vitamins and minerals, they possess diuretic properties that aid in liver and kidney function, as well aa bitter compounds that assist with digestion and appetite stimulation.

European cultures have a longstanding tradition of making alcoholic beverages with dandelions. Prior to the widespread availability of hops, dandelion was a common bittering agent used to flavor herbal beers known as gruit, and dandelion wine was so common, it was referred to as the poor man’s wine because anyone and everyone could—and did—make it. When European colonists came to America in the mid-1600s, they brought the seeds of common dandelion T. officinale with them as a taste of home in the New World. Of course, this would have unforeseen consequences.

Dandelions are aggressively invasive and have since spread across the entirety of this continent and others, rightfully earning their reputation as one of the most prolific weeds in the world. Part of their success is due to their puffball heads, known in botanical lingo as a pappus, which contain seeds that can be carried by the wind as far as five miles from their origin. Another contributing factor is their deep taproot, which, despite the best efforts of gardeners, will sprout new growth if even a small piece is left behind.

While its tenacity is what villainizes the plant for some people, I view the dandelion as a welcome part of my backyard lawnscape, as it’s one of my favorite ingredients of the year. I use the dandelion’s young greens raw in salads and, as they get older and more bitter, they are great cooked in soups and braises. The roots make a great addition to my homemade spring amaro and can be roasted and ground to use as a decaffeinated coffee substitute, like its close botanical relative, the chicories. My favorite part of the dandelion, however, is the flower heads, which are full of wild yeast that make them perfect for fermenting into wild sodas, beer or wine.

In doing our research on the subject over the years, my wife Katie and I have learned that there was a history of making dandelion wine in both of our families until just a few generations ago. A video recently circulated in my family of a distant aunt talking about how her mother (my great-great-great grandmother) who immigrated from Lithuania used to make dandelion wine each spring and how the whole family (including the kids) would drink it. On Katie’s side, her great-grandfather, who lived in Hanover, Pennsylvania and was brought up in the traditions of the Pennsylvania Dutch, learned of the practice of making dandelion wine from his German immigrant ancestors and continued to make it well into his old age.

The recipe below is adapted from Katie’s great-grandfather’s original recipe, but I’ve taken the creative liberty of substituting honey for sugar since the floral notes of honey pair perfectly with dandelion flowers (although this technically makes it dandelion mead, which just doesn’t have the same ring to it). Once complete, I use this dandelion wine to add florality and sweetness to a cocktail I’ve befittingly named the Spring Tonic along with roasted dandelion root- and flower-infused gin, yellow Chartreuse, lemon and a good tonic water, such as Fever Tree’s Premium Indian Tonic. This cocktail is best enjoyed on a blanket in the grass on a warm spring day, preferably nestled among dandelion blooms. 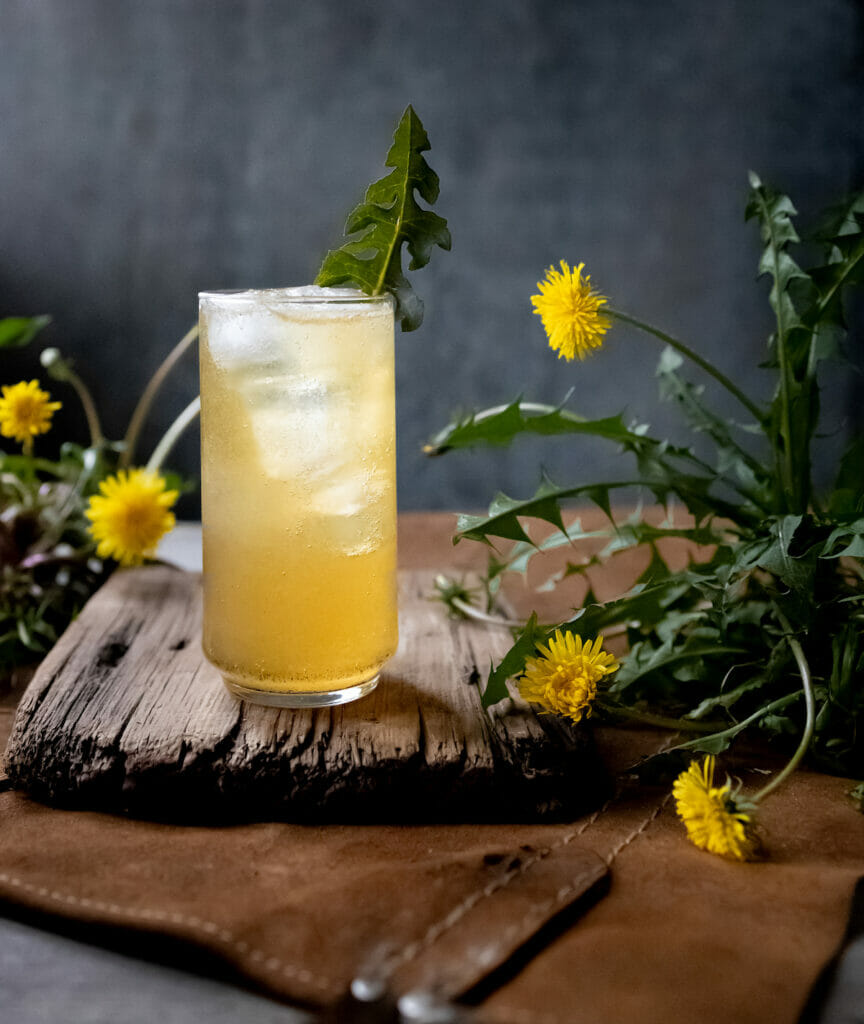 The good thing about foraging for dandelions is that you don’t have to travel far to find them, as they are likely growing on your lawn or not far from it. However, if foraging dandelions or fermenting your own dandelion wine seems daunting to you, fret not. You can purchase dandelion root tea from popular tea brands such as Traditional Medicinals and Yogi, and dandelion wine is part of a growing trend of alt-wines being produced by small purveyors across the country, including Brooklyn’s Enlightenment Wines Memento Mori, which ships nationwide.

Add all ingredients to an ice-filled Collins glass and top with tonic. Garnish with a dandelion green or flower.

Add all ingredients to a two-quart jar and allow to infuse for two hours (or longer for stronger taste).

Strain the liquid through a fine mesh strainer and discard the solids. Will keep indefinitely.

To prepare dandelion roots, unearth the taproot from the ground and clean them so that there is no dirt remaining. Coarsely chop the roots and spread on a baking sheet. Put in the oven at 400 degrees Fahrenheit and roast until dark brown and giving off a smell that is similar to coffee and chocolate (roughly 30 minutes). Once cooled, grind in a coffee or spice grinder. Will keep indefinitely, but will begin to lose potency after six months.

Pick the dandelion flowers from the plant, making sure to get the yellowest, healthiest-looking flowers. Remove as much as possible of the calyx (green part) from under the flower head if you want to reduce bitterness. Personally, I don’t mind a bit of a bitter brew.

Bring the water to a boil and pour over the dandelion and honey, stirring well to loosen the honey and incorporate all of the flowers. Allow to sit at room temperature until cold.

Once cooled, add the lemon juice and pour all ingredients into a large food-safe container and loosely cover with a cloth or loose-fitting lid that will allow air to escape but prevent bugs from entering.

Once fermentation is active (about a week), strain out flowers and transfer liquid to a fermentation vessel with an airlock or another food-safe container covered with a cloth or loose-fitting lid. Allow to ferment for an additional 4-6 weeks, until signs of fermentation begin to slow, indicating that most of the sugar has been converted to alcohol.

Rack out the dandelion wine, being careful not to disturb the yeast lees that have settled to the bottom and decat into swing-cap bottles. Allow it to sit in a cool, dark place for two weeks. It’s possible that carbonation will occur during this time, so check the bottles every so often to make sure they don’t over-carbonate.

Store in the refrigerator. It will keep for a year or more.

Danny Childs is the mixologist behind the @slowdrinks account on Instagram and the bar manager at The Farm and Fisherman Tavern in Cherry Hill, New Jersey. Danny’s beverages embody the flavors of the mid-Atlantic by using ingredients foraged from the wild and picked from his cocktail garden. His work has led to a role on the Slow Food USA Ark of Taste committee, a 2019 IACP-nominated cocktail column, and in 2021 he was the recipient of the Philly Mag “Best of Philly” award in the cocktail category. His book, Slow Drinks, will be released with Hardie Grant in 2023.

Sounds like the season wines my Mom used to make when I was to young to enjoy.. I’m old enough now but she’s no longer with as to show or even help make… Homemade wine. Gotta try this Dandelion wine recipe…. hopefully I do it correctly …so I too can care on ” seasonal rights of passage “

i like the idea of dandelion wine but im not a big fan of mead. Is there a substitute for the honey?

How many dandelion flowers or how much root to get the amounts in the recipes? Volume or weight of raw would be helpful

Is there a substitute for the honey?
oh! it is a problem