The Medieval Origins of Thanksgiving Dinner

Delving into the traditions behind the big feast. 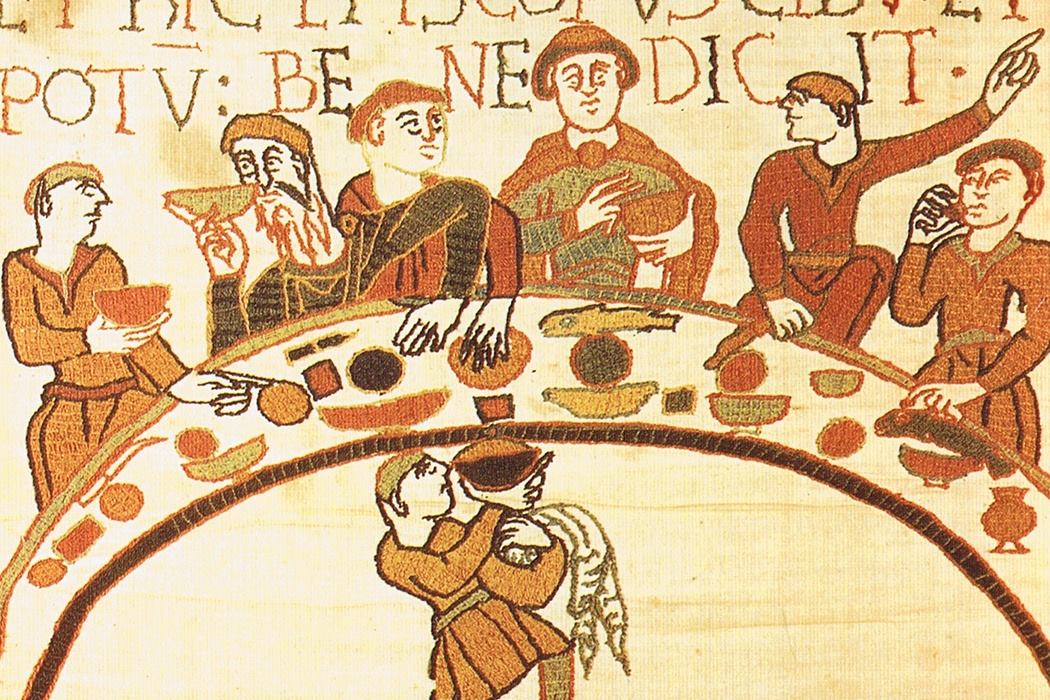 How and why did the dishes served at Thanksgiving dinner come to be so fixed?

Many assume that most of them were simply eaten by the Pilgrims during the first Thanksgiving. For this reason, they continue to be eaten today. And it’s true that most of the ingredients are American in origin: the turkey, cranberries, pumpkin, sweet potatoes—even the green beans in the casserole and the pecans in the pie.

Yet we only have one firsthand account of the “first” Thanksgiving—a brief paragraph by Edward Winslow that doesn’t mention any of these foods. And it’s been shown, time and again, that the idea of a unique culinary tradition originating from a feast between the Pilgrims and their Native American neighbors is more advertising myth than historical truth.

But maybe there is something, nonetheless, that’s very traditional about this meal.

In fact, there may be a very good reason these particular dishes—and even the way we eat the meal—came to be strongly associated with Thanksgiving. The first Americans simply mimicked or adapted the traditional fare, flavor combinations and rituals of Europe, using them to fashion the popular dishes we continue to enjoy today.

To start, think of when we eat the meal: always in the early afternoon, which is just as a proper dinner would have been served 400 years ago. Back then, supper was a smaller, evening meal. Of course, there are other early dinners that families traditionally observe (especially on Sunday). But Thanksgiving always has been, and continues to be, early. It didn’t simply start sooner to accommodate a football game.

As for the ritual of carving at the table, it’s not something we normally do. But it was positively fashionable when the colonists left Europe in the 17th century. There were even carving manuals replete with illustrations for serving their favorite roasts, which were almost always wild fowl. The only difference is that they would hold the entire bird up in the air to carve thin slices, which would fall gently on each diner’s plate. (With today’s huge, domestic turkeys, it’s understandable that we leave them on the platter.)

As for the turkey itself, it was one of the few New World foods that had already gained immediate acceptance in Europe, precisely because of its similarity to peacocks and pheasants, which were among the era’s most fashionable foods. In other words, the Englishmen who landed in Massachusetts didn’t eat turkey because it was the only local food available. Rather, they’d been quite familiar with it back in England, where it was even common to remove the skin and feathers, cook it and serve it with the feathers replaced, as if it were still living—a standard medieval trick.

The side dishes also date back to Europe, with flavor profiles that are actually medieval in origin.

Take cranberry sauce. In medieval Europe, sour fruit sauce with wild fowl was a popular combination, one that balanced a cold and moist condiment with a hot, dry meat. In the mid-17th century, for example, the famous French chef La Varenne served turkey with raspberries.

But the real connection between Thanksgiving and the medieval feast is in the spices. Although today we use the blanket term “pumpkin spice” to characterize variations of cinnamon, nutmeg, clove and ginger (and they show up practically everywhere in cheap artificial form), these flavors were the backbone of medieval cuisine, appearing in a wide array of sweet and savory dishes, from chicken to pasta.

Back then, it simply wasn’t a lavish meal without a riot of spices (which, because they needed to be imported from Asia, were wildly expensive). Today the only one of these spices that stays on the table year-round is pepper. But their pivotal role in Thanksgiving again is a reminder of the tradition’s remote origins.

And many think of green bean casserole as a classic postwar dish—invented in the 1950s as a way to use up all the cans of cream of mushroom soup that had amassed in the pantry. But “French beans” (from America) were already well-known and loved in 17th-century Europe. English Poet Gervase Markham, in 1608’s Farewel to Husbandry, remarks how tender they are when stewed. And Thomas Tryon, a British author of self-help books, writes in The Way to Health, Long Life and Happiness that French beans “far exceed and are much better than other pulses eaten green.”

Candied yams were also a 16th-century staple. In Shakespeare’s The Merry Wives of Windsor, when Sir John Falstaff exclaims that it should rain kissing comfits and hail potatoes, he is actually talking about Virginia sweet potatoes, which had been brought back to Europe in the late 16th century. (These weren’t just candied; they were also considered an aphrodisiac.) 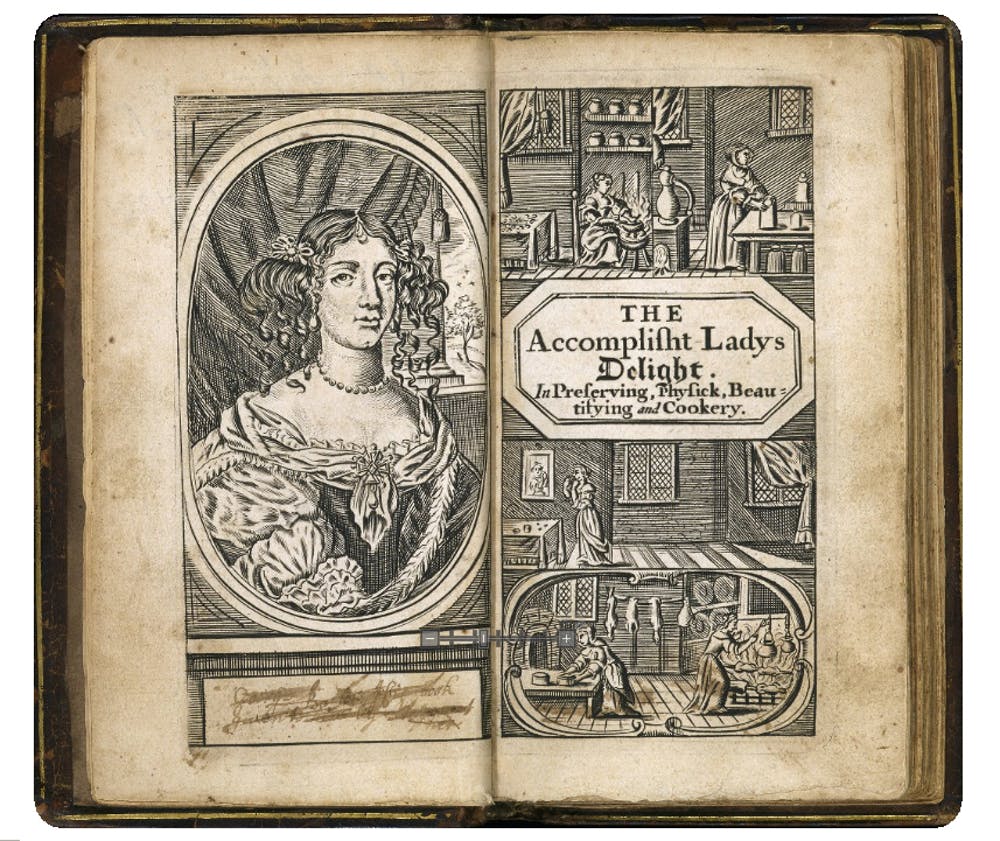 Famed English chef Robert May in the mid-17th-century cookbook The Accomplisht Cook has a great recipe for (sweet) potato pie, which wouldn’t seem too amiss on the Thanksgiving table today (though with cockscombs, testicles and bone marrow would be considered perhaps a bit overgarnished).

As for that very American pumpkin pie? In the 17th century, it was already quite common. One of the earliest female cookbook authors, Hannah Woolley, has a recipe for “pompion-pye” with the same spices we use today. She also includes apples, which, incidentally, are also thoroughly English in a pie.So despite the picture we have of English colonists adapting to strange new ingredients in their new home, most of the recipes – and those we still insist on having at the Thanksgiving table – were already regular favorites.Remember that when you lift high your (very American) turkey leg, like Henry VIII.

Ken Albala is Professor of History at the University of the Pacific in Stockton, California. He has authored or edited 25 books on food including Eating Right in the Renaissance, Food in Early Modern Europe, Cooking in Europe 1250-1650, The Banquet, Beans (winner 2008 IACP Jane Grigson Award), Pancake, Grow Food, Cook Food, Share Food, Nuts: A Global History and most recently Noodle Soup: Recipes, Techniques, Obsession.