Cooking the Whole Plant: From Root to Petal

The Forager Chef’s Book of Flora opens up a whole new menu of ingredients just waiting to be found. 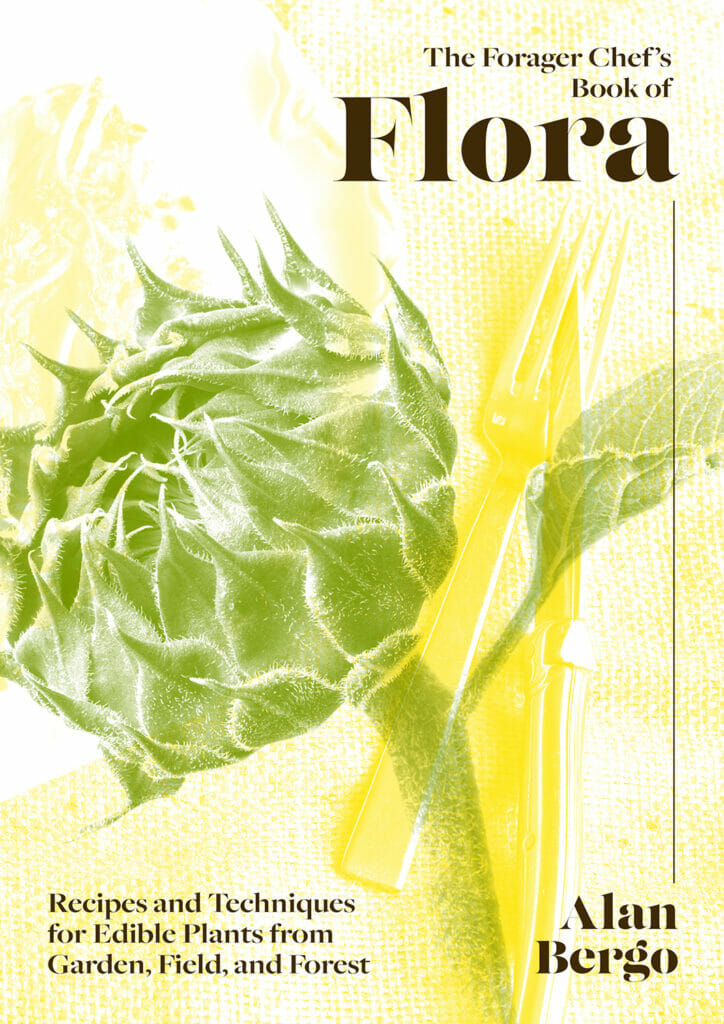 Chances are, if you look around closely, there’s an edible plant (or fungi) near you right now. From the mushrooms dotting the forest floor to the wild blueberry and raspberry bushes growing along a hiking trail. There are wild ramps and tender greens and nuts and seeds all around us, if you know where to look. Heck, even the dandelions on your lawn are edible, if you treat them the right way.

With his new cookbook, The Forager Chef’s Book of Flora, Chef Alan Bergo explores not just the variety of plants that surrounds him near his Minnesota home, but the full scope and every part of those plants. Similar to the “nose-to-tail” ethos of cooking meat, Bergo embraces a “whole plant” philosophy when he cooks and forages for ingredients. And it all started with a squash growing in a friend’s garden.

“I looked at the shoots and I was like, ‘this looks so delicious. I have no idea what this plant is, but I want to eat it,” he says. After discovering that the shoots were early squash vines, Bergo started researching and finding recipes that revolved around all parts of the plant. A girlfriend’s stepfather shared a Nepalese curry recipe that called for squash vines. He tinkered with a soup from Oaxaca with squash shoots and masa dumplings. The squash is the finished product many of us are used to, but Bergo says that’s a relatively new and privileged way of thinking. “If you are operating in a subsistence way, where you need food, are you going to wait until that squash is completely ripe? Or are you maybe going to thin some of the vines… and harvest food from that plant through the entire growing season?” Now, Bergo says that foraging taught him about vegetables, as he sees them through their whole growing season.

Bergo now forages and creates recipes full-time on his website, embracing the seasonality of the ingredients, he says this way of looking at food and plants took some time to fully develop. He describes it as an instinct, one that can be cultivated with time and practice. He jokes that his book is less a prescriptive, precise collection of recipes and more of a “teach a man to fish situation.” Besides, Bergo says, the very act of foraging is an adventure, a way to channel your inner Indiana Jones. “It’s a total rush. I feel like every day I’m out there just hunting treasure.”

Bergo’s love of the treasure hunt began when he was working in restaurants around the Midwest. He used to negotiate with the owners, begging for one day a week to go out into the wilderness and bring back his catch to put on the menu. “I felt kind of like I was playing hooky a little bit,” he says. “I was going outside and playing all day and digging in dirt and really feeling the ingredients more than when I was specifically cooking with them.” Those adventures pushed him to take chances with his menu. It’s something he encourages other chefs to do, though he admits it’s easy to get used to having reliable growers delivering produce right to your door. 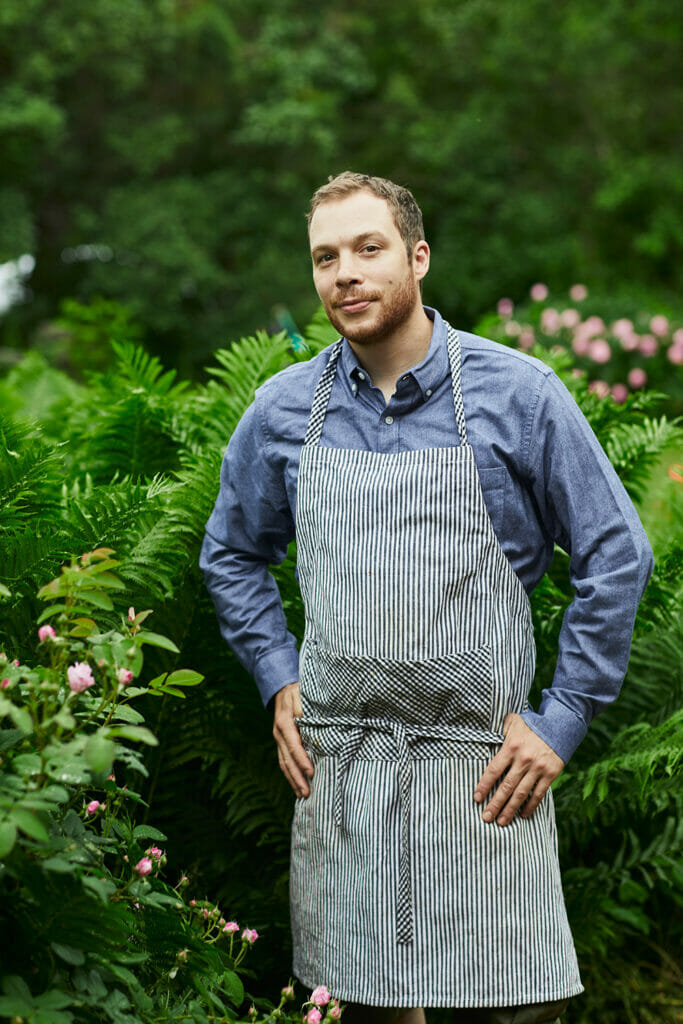 “When you’re a chef, it’s almost like you’re lord of your own little kingdom. And that is a very comfortable place to be,” Bergo says. “I can put an order in and have anything delivered to me at a time of my choosing, the place of my choosing. I have everything at my fingertips.”

Bergo wants to inspire people to step outside of their kitchen comfort zones, even for a few steps. He organized his book not by season, but by the function and taste of the plant. That way, many items in recipes are interchangeable. Can’t find nettles? That’s ok! If you have lambsquarters, or amaranths or even kale from the grocery store, you can make it work. The book aims to teach you how the flavors of the plants work together.

That’s not the only thing that sets his cookbook apart from others. Like many tomes about foraging, this one also comes with a warning. Bergo says inexperienced foragers should ideally learn from a more seasoned instructor or use his book in conjunction with a field guide. Among all the edible plants waiting to be plucked, there are some that are poisonous or dangerous. (Bergo recalls getting a rash on his face after an unfortunate incident involving the sap from wild cow parsnip.)

Even with the potential dangers, Bergo says the world of wild food is absolutely worth the effort. Most people can get started with minimal tools. Bergo himself just uses a sturdy basket with a lid and a good pair of scissors. For those interested in starting to forage, Bergo suggests checking out social media pages for local foraging groups. There are often pages of tips on where to find the best trails, as well as lots of advice for the novice forager. And once you’ve found your bounty, The Forager Chef’s Book of Flora can help you prepare it in a totally new way.

So next time you take a walk along a trail, keep an eye on your surroundings. You might just spot your dinner.

The following recip is excerpted from Alan Bergo’s new book The Forager Chef’s Book of Flora: Recipes and Techniques for Edible Plants from Garden, Field, and Forest (Chelsea Green Publishing, June 2021) and is reprinted with permission from the publisher. 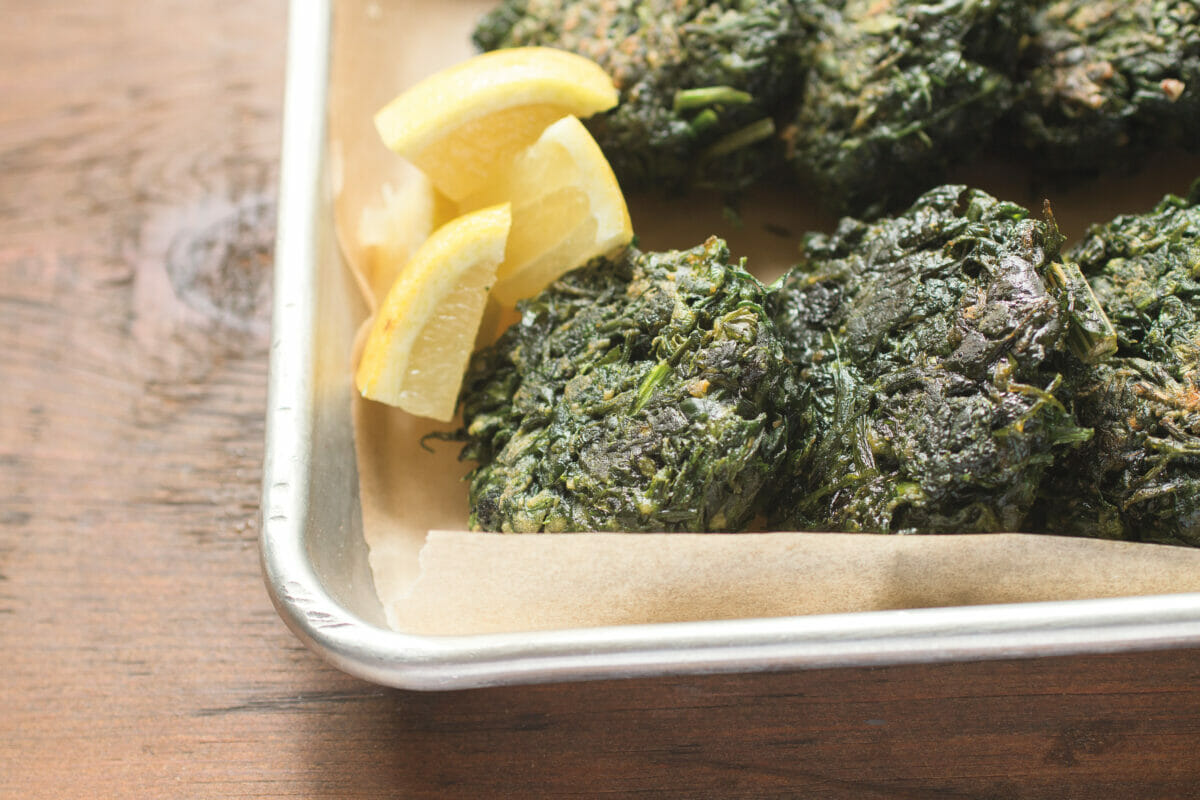 There’s a reason this is the first recipe in this book. It’s a hybrid of a recipe by French Chef Jacques Chibois and one outlined by Sam Thayer in his third book, Incredible Wild Edibles, and it’s a statement on the culinary dichotomy of these two chefs, since wild plants are high-quality ingredients sought after by chefs, but also available to anyone who takes the time to get outside and learn about them. Many different species of plants can be used, and no two batches I’ve ever made have been exactly the same. My favorite part of this recipe is how the greens continue cooking on the inside of the cake, almost as if they’re cooked under pressure, retaining a bright green color, with a tender bite that eats almost like meat. The cakes are meant to be a mild side dish—a different way to get your greens. If you want to jazz them up, consider serving them with a yogurt-, tomato-, or mayonnaise-based sauce. Sometimes I add cooked onions, seeds, or other alliums and herbs if I have them, so think of this recipe as a blank slate you can make your own. Breakfast, brunch, lunch, dinner, or as an appetizer: I’d struggle to think of a meal that wouldn’t welcome a few green cakes.

Squeeze the greens dry very well. Chop the greens fine and mix with the eggs and flour. Season the mixture with salt, pepper, and nutmeg to taste; it should be well seasoned. Ideally, you’ll now let the batter rest for 30 minutes or so before cooking, but it can be cooked straightaway if needed. Cook a small piece of the mixture to test the seasoning and adjust to your taste. Shape 1/4 cup (2 ounces / 55 g) into cakes with your hands, then fry on medium-high until browned on both sides. If your cakes seem loose or wet, mix another spoonful of flour into the batter. The cakes are sturdy and reheat well, so I usually make them in large batches. Serve with lemon wedges.

Variations
Using different grain flours and seasonings can give you different themes. For example, Latin American–flavored cakes made from quickweed and fine cornmeal, scented
with cumin, are great used to scoop up
guacamole—a bit like fried plantains. By the same token, chard or wild beet green cakes bound with buckwheat or millet flour would be at home with Eastern European flavors such as sauerkraut and pork sausage. Middle Eastern–inspired cakes could be made with malva or violet leaves, seasoned with baharat spice mix, bound with ground wheat flour, and served with tahini sauce.