Artist Dumps Over 60,000 Pounds of Carrots Outside British University

The goal is to connect the city with the land. 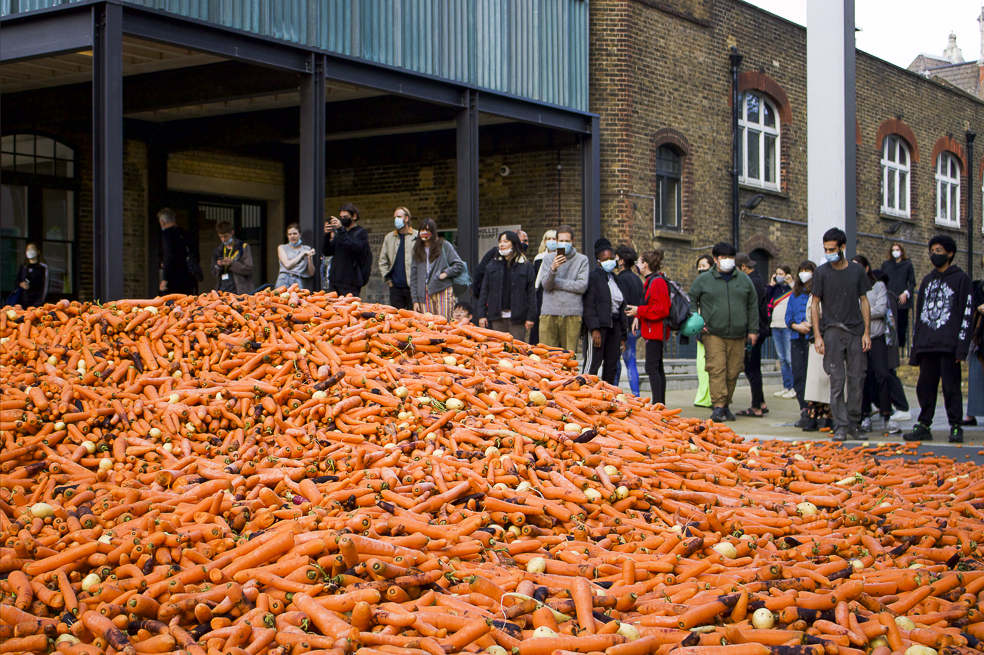 On Tuesday morning, onlookers watched as an appropriately orange truck opened its rear doors and began to unload its cargo outside a university building in London.

That cargo, it turns out, was a gigantic amount of carrots, which sparked some confusion at first. But soon the university acknowledged what was going on: an art project from Rafael Pérez Evans, titled “Grounding.”

Pérez Evans says that the total amount of carrots was 29 tonnes, which converts to just under 64,000 pounds of “fresh, unwanted carrots.” On the installation’s page, Pérez Evans writes that the concept was to “ground,” as in the electrical sense, the city to the country, a connection which has lessened over time.

The carrots were dumped outside a new glass building at Goldsmiths, University of London. But the piece isn’t just bizarre and visually striking; it has deep connections to the agricultural and food world. These carrots were, says the artist, unwanted by grocery stores, which often reject imperfect-looking produce.

The act of dumping the carrots unceremoniously and with a truck, was also chosen for its symbolic resonance rather than just as the easiest way to transport them. Recently, we’ve seen a great deal of food dumping by farmers, who have lost many of their biggest markets (like restaurants, schools, and offices) during the COVID-19 pandemic.

But food dumping has also been used for decades as a protest by farmers, to make their voices heard about labor issues, price fixing, and other types of mistreatment in the market. Even within the past few years, French farmers have dumped manure and produce as a protest against artificially low prices for their goods.

Pérez Evans says that after the exhibition ends on October 6, the carrots will be collected and donated as feed for animals. There is a sign saying not to eat the carrots, though it’s pretty difficult to tell college students not to collect free food, and the Daily Mail reports that several students have been seen grabbing a few carrots on their way past the installation.

The carrots could have gone to food banks. Point could have been made with just one ton of carrots.

Too bad these 2 folks don’t understand! These carrots would be not food bank acceptable, they are ‘culls’………and 50 tons wouldn’t tell the story or a 1000 either. There are millions of tons that aren’t “good enough.

Kind of a stretch to call this an art project.

What a waste of resources. Counterproductive and foolish.