In Search of the Last Untamed Food

An excerpt from "Feasting Wild," a new book by Gina Rae La Cerva, which combines memoir and travelogue to trace the relationship between "wild food" and environmental conservation. 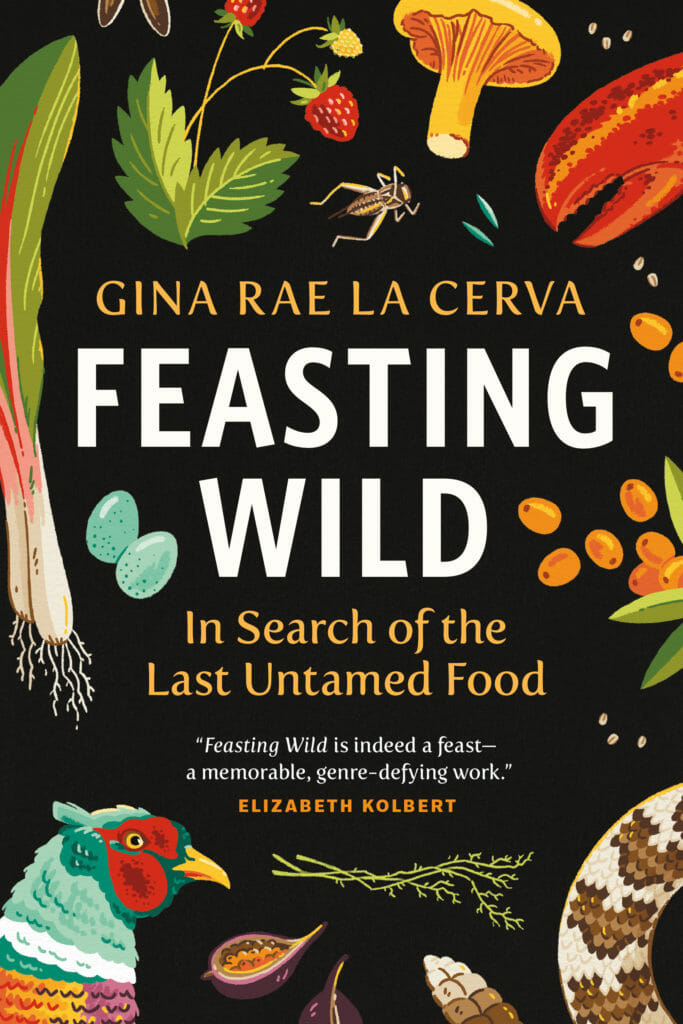 I have come to Copenhagen to try to understand why the seemingly archaic practice of gathering wild plants is having a resurgence, to follow the trend of time and place. Before I eat lunch at Noma, I join a group of food researchers from the Nordic Food Lab to forage in Assistens Cemetery. No one can remember if foraging here is legal, but all the city’s finest chefs do it. “Perhaps the best offerings will be found growing on top of a dead chef,” John, a young food researcher from Canada, jokes as the sound of a grass cutter motors nearby.

The graveyard is renowned for having the tastiest wild onions within city limits. Ramson (Allium ursinum), also called broad-leaved garlic, wood garlic, or bear’s garlic, is part of the lily family and related to chives. Ramson grows in damp, shady places and produce clusters of tiny white flowers, which become little hard green berries by midsummer. These eventually pop open to reveal black seeds. The chefs are hoping to pickle the ramson berries as part of their research into the process of flavor creation during preservation. They are working on a project to map the functions of various compounds within fermented foods. For instance, both chile and garlic contain antimicrobial compounds that affect the rate of lactic fermentation. By adjusting the ratio of these elements, they hope to create more flavor with less acidity.

Of course, what is deemed delicious is very much context specific, and the madness of hunger has driven humans to eat all manner of foods. Tastes change with desperation. In many ways, we are desperate today, too. Although thirty thousand plant species have been used at some point for food or medicine, we now rely primarily on just thirty varietals. Sixty percent of our diet is made up of just four annual crops—rice, wheat, corn, and potatoes—three of which are only edible when cooked. Eighty percent of our agricultural crops are annuals that must be ripped up and replanted each year. Almost all of them are highly inbred monocultures that are generally less flavorful or nutritious than their wild counterparts, which tend to contain higher concentrations of essential nutrients such as vitamins A and C, thiamine, riboflavin, iron, and trace minerals. Eating a diversity of wild foods is associated with higher rates of gut flora diversity, which correlates to better measures of health. The increasing homogenization and standardization of agriculture is making us sick. Our psyches, palates, and physiques were not made for such uniform food. We yearn for the taste of the wild.

As we ramble onward, I notice the numerous edible plants growing in the cemetery. Most have been planted as decorative ornamentals, but that doesn’t stop people gathering them. Foraging in urban areas like this is far from new—immigrants have long used city parks and green spaces to harvest familiar plants in their new homes, and it continues to be a subsistence practice for many groups.

But urban foraging is also an increasingly popular activity among “foodies,” despite the potential health risks—plants growing in cities may be polluted with lead and other heavy metals—and the fact that it is illegal in many places. Perhaps the first high-profile case of criminal urban foraging was in 1986, when Steve “Wildman” Brill—dubbed “The Man Who Ate Manhattan”—was arrested in Central Park for illegally gathering plants. He continues to lead foraging tours around the city. And he is not alone; social media and cell phone apps that identify edible plants have both fueled the rise in urban gathering.

“What do you think about the recent trendiness associated with foraging?” I ask John as we head toward a back corner of the cemetery in search of ramps.

“It’s a double-edged sword,” he says. “While it’s great more people are interested, it’s dangerous that the interest is growing without the corresponding knowledge. How to not pick things that will kill you or make you sick. Knowing not to pick everything and how to not destroy the habitat, which is even more important.”

As one of the first wild plants to emerge in spring, ramson was traditionally a welcomed bit of edible green and vitamins after many cold months of preserved foods and dried meats. In the United States, the related species called ramps were a highly valued and spiritually important plant for numerous Indigenous American tribes, including the Cherokee, Ojibwa, Menominee, Iroquois, and Chippewa. They were eaten boiled, fried, or dried for winter use, or made into tonics to fight various ailments.

Ramps were so widely consumed by the first colonists during periods of hunger that their smell came to be associated with poverty. Today, they are a delicacy. One of the more typical uses of the leaves is to make pesto, capturing the flavor of both herb and garlic in the same ingredient. Unfortunately, the increasing demand is threatening the plant’s existence. Ramps are particularly in danger of being overharvested, in part because they are incredibly slow-growing: it takes anywhere between three and seven years for a seed to become a plant large enough to be eaten. If harvested correctly—by cutting above the roots, leaving some of the bulb in the ground—ramps will eventually regenerate. A general rule of thumb for foragers is to only take 10 percent of what you find and leave 90 percent behind for nature, but this highly depends on the specific plant and the number of other people also gathering it in the same area. According to one experiment, harvesting ramps sustainably would require collecting just 10 percent every ten years.

Ramps continue to be of high value to many Indigenous Americans, though modern environmental regulations have disrupted the link to their heritage. Harvesting wild species is banned across all U.S. national parks, but individual park superintendents can regulate the picking of certain plants and fungi as they see fit. In 2009, a member of the Eastern Band of Cherokee Indians was charged with illegally harvesting ramps in Great Smoky Mountains National Park, the site of traditional family gathering plots for thousands of years. The Cherokee continue to fight for their sovereign right to harvest on ancestral lands and have set up projects to cultivate the plants and reduce reliance on wild populations.

Wild plants have been loved to death before. Silphium was a fennel-like vegetable used extensively in classical antiquity as a prized seasoning, and as grazing fodder for meat animals because it was said to improve the taste of their flesh. It was also a popular contraceptive and a treatment for numerous other maladies—indigestion, cough, sore throat, fever, warts, and pains. The plant became so revered and economically important that the North African city of Cyrene stamped an image of its heart-shaped seedpods onto their coins. By the second century BCE, silphium was so overharvested that it was headed toward extinction. The last remaining stalk, so the ancient chronicle goes, was given to Emperor Nero as a curiosity.

The act of gathering means there is no guarantee of a harvest, and I am starting to think the ramson berries will remain elusive. But near Kierkegaard’s grave, we find some growing beneath a towering pine.

People should dry more. If you dip various plants in citrus juice or vinegar, possibly roll in sugar and or salt, and then dry, it lasts better. Bottled lemon or lime juice generally contained citric acid in the past. Bottled lemon juice was Germanic, lime juice British and vinegar for the poor. People held these in their mouth, swirling them around, to help ith scurvy.