How Distilleries Are Stepping Up to Help Flatten the Curve

Farmers and distillers are teaming up to make hand sanitizer. 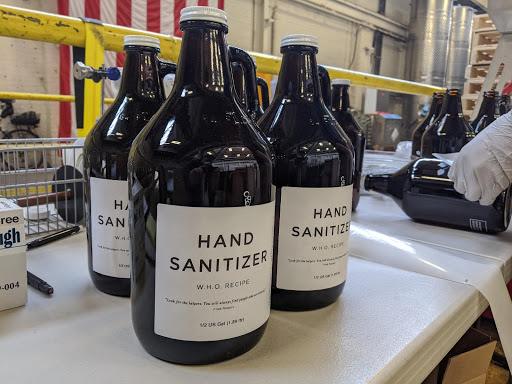 Koval Distillery is one of many companies working to flatten the curve by making hand sanitizer.
Photography courtesy of Koval Distillery.
Share
Tweet
Pin
Email
677 Shares

Marty Derks wouldn’t usually spend eight hours on a Sunday grinding corn, but the Canadian farmer received a call last weekend from an anxious neighbor and says it wasn’t a request he could turn down.

“The only thing I thought was this guy needs my help,” Derks says.

The plea was made by Rob Heuvel, of King’s Lock Craft Distillery in Johnstown, Ontario, a rural community located about 45 minutes from Canada’s capital of Ottawa.

Huevel told Derks he needed two tons of corn for the following day. The corn was to be fermented for hand sanitizer his distillery was providing to local municipalities, first responders, organizations and healthcare providers. All parties had been experiencing a shortage from their primary suppliers during the COVID-19 outbreak.

Within a few hours, Derks was able to locate a portable unit to grind the product. He repaired the machine the next morning, and by 9 a.m., he had started to create the grinds for a fermented product that would eventually make up the alcoholic ingredient of the sanitizer.

Derks notes that the corn he had on hand would have normally been sent to Greenfield Ethanol or Ingredion, two large agribusinesses nearby, but he felt it was important to put the community first.

“Some things we do for profit, but we don’t have to all the time, especially in this case. Breaking even is good enough sometimes, right?” he says. “If someone needs your help, you help them and that’s what I did.”

Heuva’s wife, Laura Bradley, who co-owns the distillery, says they’ve been able to send out more than 600 liters of hand sanitizer already and expect to be supplying around 700 liters every week going forward. As a small business with a staff of three, they’ve relied on a few volunteers to help with production.

“It’s a little bit insane,” she says, adding that they’ve had to start turning down requests from local residents who could be staying inside their homes and washing their hands. “Healthcare is priority, frontline workers, grocery stores, truckers…These people have no choice. They’re the ones helping all of us, keeping us all safe.”

Bradley adds that while they’ve been charging for the sanitizer, they’re donating their profits to local food banks in Ottawa and the surrounding area.

King’s Lock Craft Distillery is not alone in its actions to help address the ongoing demand of hand sanitizer. Distilleries of all sizes across North America have pivoted in their operations to do their part as the virus sweeps across the globe. Many distilleries are using a guide released by the World Health Organization about how to produce hand sanitizer in a local capacity.

In Chicago, KOVAL Distillery set up a GoFundMe page to ensure it can supply hand sanitizer to the community free of cost. Its $60,000 goal covers the cost of products, labour and utilities to keep its building running. As of Friday morning, the page raised $50,000.

The distillery is going to continue collecting donations even after its goal is reached, to provide free hand sanitizer for as long as possible. Since Monday afternoon, when KOVAL began its hand sanitizer production, it has produced more than 3,000 liters of hand sanitizer.  The goal is to produce about 1,800 to 2,200 liters a day in order to supply frontline healthcare workers, the Chicago Police Department, shelters and retirement homes.

Jason Barrett, president of Black Button Distillery in Rochester, New York, has also been tirelessly trying to keep up with the demand for sanitizer in his community. He figures he and his staff of 25 have spent about 140-150 hours in the last 10 days.

“It’s pretty much roll out of bed, work and reach a point where I can’t go anymore. I shower, go to bed, get up and do it all over again,” he says. “Sometimes, I make time to eat.”

Barrett is also a farmer and makes a point of usually using products from other local farms in his blends. But the need has been so large for hand sanitizer that he has had to use a third party that collects from a variety of producers in New York and makes the ethanol in its facility. That ethanol then gets shipped to its headquarters where the product is prepared, bottled and then sent to those who need it.

Despite not being as connected to producers as he normally would be, Barrett says he appreciates fellow farmers assisting him now more than ever.

“Local farmers are the lifeblood day in and day out,” he says. “These guys are the ones that take care of us. And so the fact that we get to work with them, even if it’s a little more indirect, that’s still huge.”

North of the border, Bradley says she’s grateful that she and her husband could count on Derks. She adds that they will be relying on him in the future as they make more sanitizer.

“We can do this because we are close to farmers, but knowing we can turn to those people in our community in a time of crisis, I think that’s amazing,” she says.

These are the stories that will help us survive – stories of people going above and beyond to help our healthcare and other front-line workers. Stories that strengthen our faith in our neighbors, and our community. THANK YOU to everyone in the story, and others who have not been named who are trying to do their part.