If you told me there was a jerky snack made out of kelp - yes, like beef jerky - sure, I'd believe you. But if you told me that it was actually tasty - and hearty - well, I'd likely raise an eyebrow. 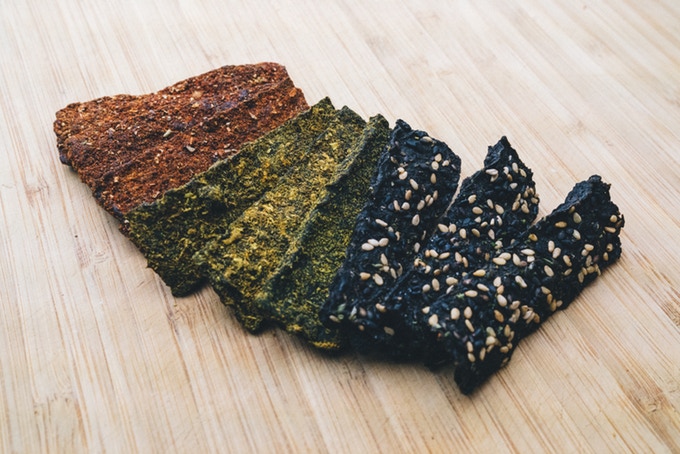 But then I tried Akua Kelp Jerky and, no joke – I was actually floored. Not because I was expecting it to be horrible, but because I wasn’t expecting it to be quite so enjoyable. Akua is a new company on a mission to create a line of healthy, sustainable, kelp-based food. Their first product is kelp jerky, which comes in three flavors: sea salt and sesame, turmeric Thai and coconut, and rosemary maple and BBQ. Each 1.5 ounce bag of jerky (about nine strips) packs eight grams of protein and less than one gram of sugar (derived from maple trees, not the processed stuff), making it a healthier choice than most off-the-shelf energy bars. The jerky is made from 100 percent ocean-farmed, latissima kelp from Maine, along with shiitake mushrooms, pea protein, and chickpea flour, among other ingredients.

Unlike traditional beef jerky, which can sometimes be tough and almost tiring to chew, this kelp jerky has a more tender, yet totally substantial, texture. My favorite was the rosemary maple and BBQ flavor, which is unusual for me considering I don’t often like anything BBQ-flavored, only actually barbecue. Neither the rosemary, maple, or BBQ flavors were overly powerful, but instead, each took a turn making an appearance as I chewed. Vegans and meat-eaters alike will be satisfied, both energy- and flavor-wise, with this snack. (Variety pack consisting of three bags of Akua Kelp Jerky, one of each flavor plus bonus Akua Seagreens Cookbook, $26)

Hi, I was browsing and happened upon this article which stirred my interest. I’m vegetarian and frugality enthusiast. If you are interested in product sales in Central Florida, I’d love to explore how we can both benefit.

I was raised in South America. I remember when we used to make seamoss porridge and pour milk on top. Thanks.

we are coffee growers since last many years, we really need suggestion, we would like to take some sugestion from your organiations

Sounds tasty. But also highly processed, of course. I laughed at the claim the jerky “uses sugar derived from maple trees, not the processed stuff.” Both sugar-cane and maple sugar are highly processed. Maple sugar requires a lot of boiling and evaporation = fuel combustion. Just sayin.

Popular
7 Smokable Plants You Can Grow That Aren’t MarijuanaBrian Barth
New Solar Panels Allow Farmers to See the LightNaoki Nitta
6 Differences Between Llamas and AlpacasAndrew Amelinckx
The Cold Swim HomeMarcie Callewaert
Goat Sex: Everything You Wanted to Know But Were Afraid to AskAndrew Amelinckx
Explore Modern Farmer
Related
Food & Drink, Lifestyle
Move Over, Mezcal. A Sustainable Tequila Alternative Is Taking Over.Hollie Stephens
Aquaculture, Food & Drink, Plants
Meet The Modern Farmers Drumming Up Demand for KelpBridget Shirvell
Food & Drink, Plants
Cacao Makes a Comeback in Puerto RicoJen Ruiz
Food & Drink, Food Waste, Technology
Can Technology Make Colorado’s Peaches Even Juicier?Daliah Singer
wpDiscuz
We use cookies on our website to give you the most relevant experience by remembering your preferences and repeat visits. By clicking “Accept”, you consent to the use of ALL the cookies.
Cookie settings ACCEPT
Privacy & Cookies Policy