The True Story Behind “Mary Had a Little Lamb”

The nursery rhyme, which was was first published in 1830, is based on an actual incident involving Mary Elizabeth Sawyer, a woman born in 1806 on a farm in Sterling, Mass. Spoiler: its fleece *was* white as snow. 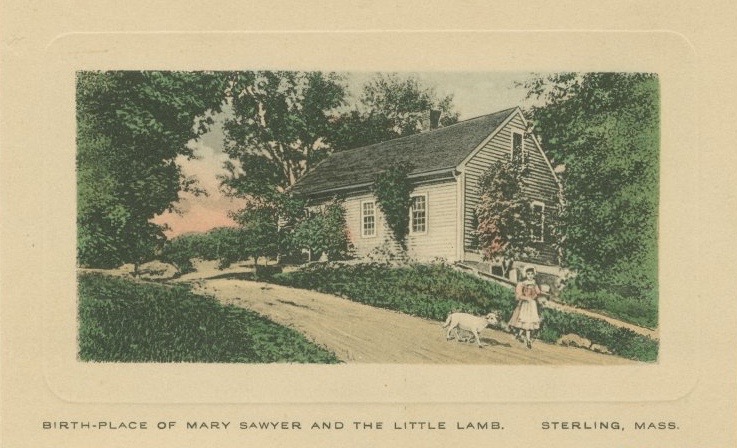 The nursery rhyme, which was was first published in 1830, is based on an actual incident involving Mary Elizabeth Sawyer, a woman born in 1806 on a farm in Sterling, Mass. In 1815, Mary, then nine, was helping her father with farm chores when they discovered a sickly newborn lamb in the sheep pen that had been abandoned by its mother. After a lot of pleading, Mary was allowed to keep the animal, although her father didn’t hold out much hope for its survival. Against the odds, Mary managed to nurse the lamb back to health.

“In the morning, much to my girlish delight, it could stand; and from that time it improved rapidly. It soon learned to drink milk; and from the time it would walk about, it would follow me anywhere if I only called it,” Mary would later write in the 1880s, many decades after the incident. And, yes, the lamb would indeed follow her wherever she went and did have a fleece as white as snow.

Sometime later, it’s uncertain exactly when, Mary was heading to school with her brother when the lamb began following them. The siblings apparently weren’t trying very hard to prevent the lamb from tagging along, even hauling it over a large stone fence they had to cross to get to Redstone School, the one-room schoolhouse they attended. Once there, Mary secreted her pet under her desk and covered her with a blanket. But when Mary was called to the front of the class to recite her lessons, the lamb popped out of its hiding place and, much to Mary’s chagrin and to the merriment of her classmates, came loping up the aisle after her. The lamb was shooed out, where it then waited outside until Mary took her home during lunch. The next day, John Roulstone, a student a year or two older, handed Mary a piece of paper with a poem he’d written about the previous day’s events. You know the words:

Mary had a little lamb;
Its fleece was white as snow;
And everywhere that Mary went,
The lamb was sure to go.

It followed her to school one day,
Which was against the rule;
It made the children laugh and play
To see a lamb at school.

And so the teacher turned it out;
But still it lingered near,
And waited patiently about
Till Mary did appear.

The lamb grew up and would later have three lambs of her own before being gored to death by one of the family’s cows at age four. Another tragedy struck soon after when Roulstone, by then a freshman at Harvard, died suddenly at age 17.

Here’s where the controversy begins. In 1830, Sarah Josepha Hale, a renowned writer and influential editor (she’s also known as the “Mother of Thanksgiving” for helping making the day a holiday), published Poems for Our Children, which included a version of the poem. According to Mary herself, Roulstone’s original contained only the three stanzas, while Hale’s version had an additional three stanzas at the end. Mary admitted she had no idea how Hale had gotten Roulstone’s poem. When asked, Hale said her version, titled “Mary’s Lamb,” wasn’t about a real incident, but rather something she’d just made up. Soon the residents of Sterling and those of Newport, New Hampshire, where Hale hailed from, were arguing about the poem’s provenance – something they continued to do for years. In the 1920s, by which time both Mary Sawyer and Sarah Hale were dead, none other than Henry Ford, the man who revolutionized the auto industry, leapt into the fray. The inventor sided with Mary’s version of events. He ended up buying the old schoolhouse where the lamb incident took place and moved it to Sudbury, Mass., then published a book about Mary Sawyer and her lamb. In the end, it seems the most logical explanation is that Hale simply added the additional stanzas to Roulstone’s original (which she’d probably gotten wind of at some point).

But wait! There’s a third version of how the Mary and her lamb story came to be. Across the pond in Wales, Mary Hughes, of Llangollen, Denbighshire, was credited with being the subject of the nursery rhyme supposedly penned by a woman from London by the name of Miss Burls. The only problem with the U.K. version of events is that Mary Hughes wasn’t born until 1842, twelve years after Hale’s poem was published.

In the end, the nursery rhyme took on a life of it’s own after it was set to music. It became wildly popular beginning in the mid-1800s. The poem even became the first audio recording in history when Thomas Edison recited it on his newly invented phonograph in 1877 in order to see if the machine actually worked. It did. Listen to it here. Back in Sterling, Mass., they continue to celebrate Mary Sawyer. There’s a statue of the famous lamb in town, and a restored version of Mary’s home (the original was destroyed by a pair of arsonists back in 2007). Her descendants continue to farm the land that gave birth to the most famous nursery rhyme of all time.

Quite an informative write-up on the actual story behind the Mary Had a Little Lamb Nursery Rhyme… Good Read!

I had a dream which implied that the poem was a message about mother Mary and Jesus.

DId the lamb have a name?

Hi can I use the rhyme in a ministry taping for the whole world do you know if it’s against the law? Copyright law

Reading this story is quite a coincidence for me, this school house is only a few miles from my house, and I’ve been there many times, especially when I was little, my father was an avid/professional photographer and we have a million photos of the School House, the Gristmill, and the Martha Mary Chapel, in fact I was in a wedding at that Chapel, what I didn’t know, was that Henry Ford had moved that School house to Sudbury. The coincidence part, I was just recently cleaning out my parents house for my niece’s family to move in, my parents… Read more »

I agree the most logical explanation is that Hale simply added the additional stanzas to Roulstone’s original. I don’t see any evidence that Hale was exposed to sheep enough to know enough to write the initial stanzas. First that lambs can become imprinted (at least partially) on people so that they follow them around. Secondly, and most importantly, to know that male lambs tend to be a lot more adventurous and friendly to people than female lambs. If Hale had “conjured this story up out of her imagination” as she claimed, why would the lamb have been male ? Wouldn’t… Read more »

So we found this account of the poem’s origin very enlightening!

Why do all these interesting stories have to end horrifically?

His is so sad to here