First, the Reverend Richard Joyner got mad. Then he got a trowel. Sick and tired of seeing his congregation suffer from poor nutrition, the North Carolina minister sowed seeds of hope in a food desert. 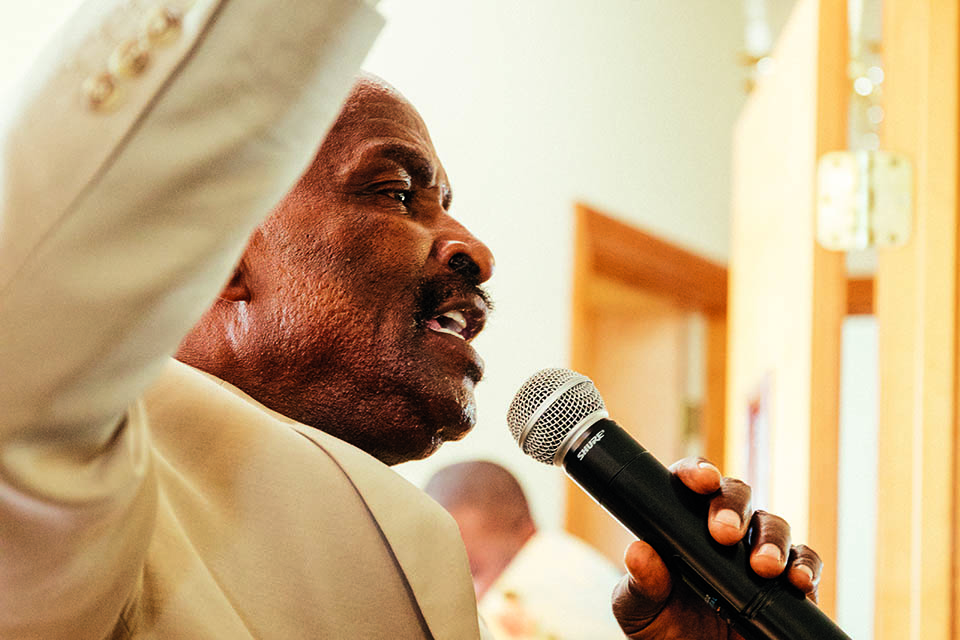 ABOUT A DECADE AGO, the Reverend Richard Joyner of Conetoe Chapel Missionary Baptist Church realized he was conducting funerals twice a month – a startling rhythm, given his town’s tiny population. A mere 300 souls call Conetoe (pronounced Ka-nee-ta) home. The predominantly African American hamlet is situated in North Carolina’s Edgecombe County, where a quarter of households live below the poverty line and heart disease kills more 20- to 39-year-olds than car accidents. “I’ve closed too many coffins on young people,” Joyner says.

The pastor found it difficult to comfort the grieving – or contain his outrage: “How do you tell someone who’s just lost a child to poor nutrition that this was God’s plan when it was totally preventable? Who would hang out with that God?” Each Sunday, Joyner felt like a hypocrite, urging congregants to worship a deity he doubted. During the week, he was forced to confront the community’s health problems constantly as a hospital chaplain.

After one particularly trying hospital shift, Joyner pulled his car over and began to pray. “I heard a voice saying, ‘Open your eyes and look around,’” the 64-year-old remembers. All he saw was farmland. His parents and grandparents had been share- croppers; his great-grandparents, slaves. Until that moment, the fields blanketing Edgecombe County had represented not untapped opportunity but a painful reminder of the region’s racist past. 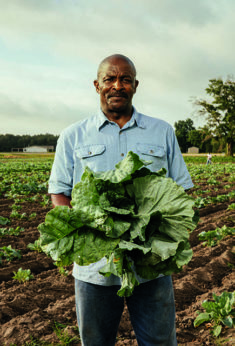 Joyner started the Conetoe Family Life Center, as the farm is now called, over a decade ago. 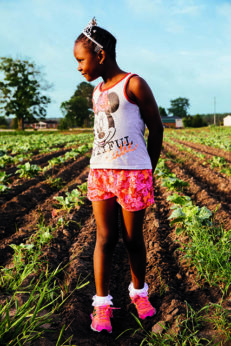 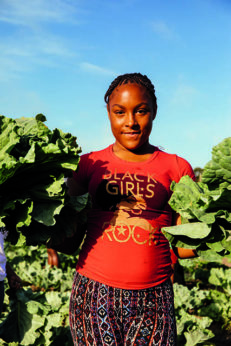 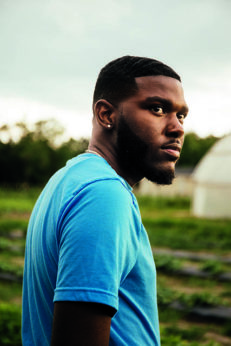 Tobias Hopkins, one of the center’s youth leaders, accepted a 2016 Local Food Hero award from the nonprofit Farm to Fork North Carolina.

To suggest that this roadside epiphany directly inspired the church’s now-bustling nonprofit agriculture and education center might construct a tidy narrative. It would, however, be inaccurate. Back in 2005, when Joyner first equipped area youth with seeds and spades on a borrowed plot down the road, he simply hoped to engage kids at summer camp. The campers consumed their initial harvest, but the following year, they started delivering free boxes of ‘Hen Pecked’ mustard greens, ‘Puerto Rican Red’ sweet potatoes, and other vegetables to local senior citizens. “One 97-year-old lady, she was so excited, she kissed the children,” Joyner says. “That was the first time in a long time I witnessed anybody speaking a blessing over our troubled children.”

Not everyone welcomed the bounty. Only a generation or two removed from sharecropping, some church elders questioned the wisdom of participating in any sort of agrarian pursuit. They remained uncomfortably familiar with Edgecombe County’s role in the South’s antebellum cotton economy. Henry Toole Clark, a Civil War”“era governor of North Carolina, owned a vast plantation – and dozens of slaves – here. As Joyner explains the prevailing concern: “Do we really want our kids going back to that?”

He empathized. Then again, he’d witnessed the satisfaction junior parishioners derived from the soil. Less encumbered by Conetoe’s complicated history, they were free to dig in the dirt. “They’re bringing food to people who need it,” Joyner says. “They enjoy the process. They’re playing out there.” Meanwhile, the various activities on the farm – preparing beds, selecting seeds, tending crops, selling produce, tracking digital data – impart valuable lessons in science, technology, economics, math, and nutrition. 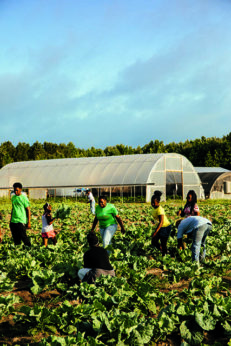 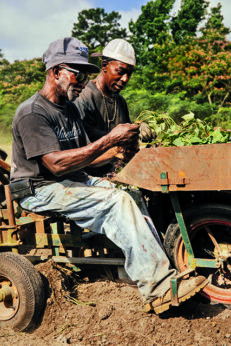 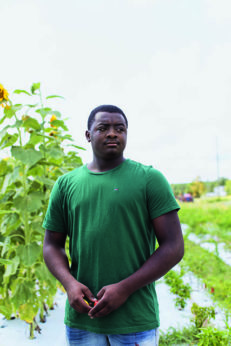 Marquon Pettaway was named a Local Food Hero by Farm to Fork North Carolina last year. When Pettaway started working on the farm, he says, “My friends asked, ’Why you doing that?’ Then they saw me on the news.” 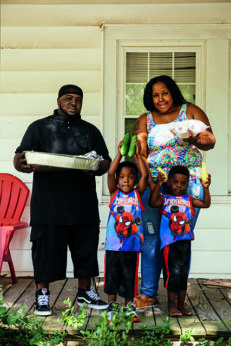 Eric and Stacy Whitehead, with sons Ethan and Evan, cook meals for the needy using the farm’s produce.

Adept as Joyner may be at casting visions, he admits to shortcomings in the arena of organizational management. At the outset of the farm’s second season, the preacher petitioned Vidant Edgecombe Hospital, where he volunteers as a chaplain, for a grant. “I wrote the application, with my dyslexia, and it was terrible. I prayed over it: God, please help them understand what’s going on.”

Although a phone conversation was required to clarify intent, the hospital ponied up $2,000. Two years later, the Presbyterian Church (U.S.A.) gave Joyner $15,000. And in 2011, The Conservation Fund donated $7,500 through its North Carolina”“based Resourceful Communities initiative, which emphasizes the link between socioeconomic and ecological strengths. “Richard can sweet-talk people out of tractors,” says the initiative’s director, Mikki Sager, “yet the whole effort seemed random.” So she made further funds dependent on proper managerial oversight. “We weren’t trying to be controlling,” explains Sager. “We wanted them to have the pieces in place so they could articulate a good plan and deliver on it.”

Joyner’s magnetic charisma and missionary zeal have attracted a wide base of fervent fans. Among the converted: Garrie Moore, a retired vice-chancellor of the City University of New York, who signed on as executive director of the program three years ago. Ruth Little, an assistant professor of public health at East Carolina University, has pitched in by training a number of Edgecombe County citizens as lay health advisers over the years. Tes Thraves, of North Carolina State University’s Center for Environmental Farming Systems, immediately thought of Joyner in 2010 when she founded the Food Youth Initiative, a statewide effort to bring teens together to explore food justice issues. Of the Conetoe delegation, Thraves says, “They grasp the power analysis of the world around them. They’re raised with integrity and empowerment. They believe in something.” 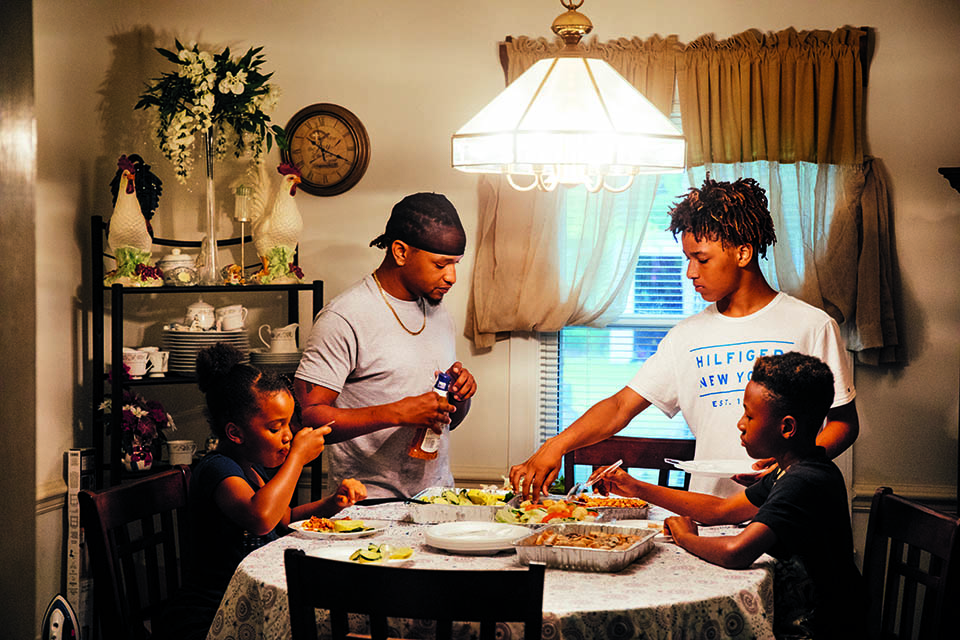 Steven Daniels (in gray shirt) and his children – (from left) Kesani Weathersbe, Keylen Harvey, and Zion Weathersbe – gather for a plant-based dinner.

Proceeds are reinvested in the program. A single market-rate cabbage puts 10 cabbages on the tables of needy families. Approximately 25 percent of the produce is distributed among church members, with those who can afford to contribute subsidizing others who cannot. Health-related outreach continues year-round.

The results are nothing short of dramatic. Since 2012, visits to Vidant’s emergency room – the de facto primary care clinic for underinsured parishioners – have decreased by 75 percent. Collectively, the 250-member congregation spends $4,000 less on medication per quarter than it did a decade ago. Joyner’s many accolades include the 2014 Purpose Prize (honoring the social work of citizens over 60) and a 2015 Hero salute from CNN. Last year, when he accepted a Local Food Hero award from the nonprofit Farm to Fork North Carolina, the pastor did not stand alone.

Two of the program’s participants – Tobias Hopkins, 19, and Marquon Pettaway, 20 – were also honored. Pettaway thrived in the apiary. He’ll talk endlessly about the hives, about honey’s merits, about how he made beeswax candles for a school project. “The bees have a job, too. They have an everyday job,” he says. “That made me motivate myself to keep pushing.”

Before getting involved with the farm, Pettaway viewed the army as his only option, but he now attends community college. “The program,” he says, “changed things for me.” Still, maintaining a healthy lifestyle can be challenging in Conetoe, a food desert that lacks a single full-size supermarket. Pettaway’s mother works at Bojangles’, where fried chicken and biscuits anchor the menu. “I get the grilled Cajun Filet Biscuit from Bojangles,” he insists. “I get the grilled.” 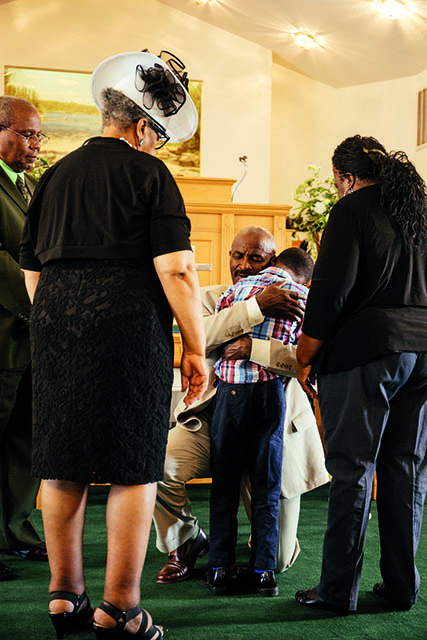 Joyner greets parishioners after a Sunday worship service this past summer.

Last September, I visited the Conetoe Family Life Center with a delegation from Princeton Theological Seminary and helped plant 10,000 cabbage and collard green seedlings. Three weeks later, on October 8, Hurricane Matthew hit the Carolinas. Conetoe and the neighboring towns of Tarboro and Princeville occupy low-lying, flood-prone terrain (shortcomings that explain the relative ease with which rich whites ceded this land to poor African Americans). The Tar River overflowed its banks and destroyed most of those plants, 100,000 others, plus 120 beehives and all the honey in them.

Joyner was apoplectic. “I was not angry at God,” he clarifies. “I was angry at those of us who add to global warming. I was angry at people who will not take ownership.” For centuries, his community has wrestled with the compounding consequences of others’ sins, and he considers climate change another variation on that theme.

When I spoke to the pastor again in June, the church had recently buried a 29-year-old woman after she succumbed to renal failure. Several of her relatives had also died of kidney disease. But Joyner noted that this funeral was one of only a handful he’d performed for people under 40 over the previous 12 months. And he mentioned that the woman’s 13- and 19-year-old cousins currently work on the farm. The fields, at least, “were flush green and full,” he said. “You can become hopeless real quick around here. But things are improving. I’m totally hopeful about these children.”