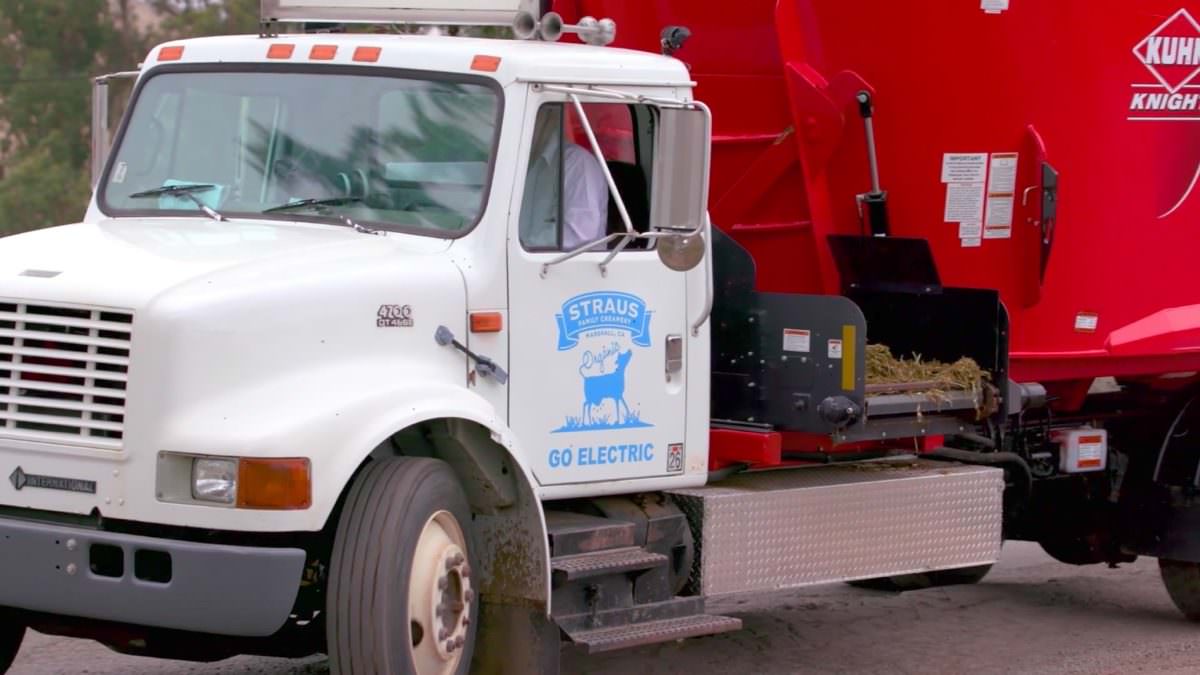 “We’re trying to show that organic dairy farming can be part of a solution to climate change.”

Albert Straus, of Marin County, California, is a pioneering farmer in the sustainability movement. His dairy, Straus Family Creamery, became the first certified organic dairy west of the Mississippi River back in 1994, he’s the primary dairy provider for Cowgirl Creamery (one of the country’s best cheesemakers), and for more than a decade, his Marshall, California farm has been powered by material produced on-site – namely, cow poop.

How? Straus uses a covered lagoon operating as a methane digester convert cow manure into electricity.

“Every day, we flush and scrape the manure from the barn, which goes into a manure separator that removed the solids from the liquids,” he explains. The solids are used as fertilizer, but the real magic is in the liquids. The liquids are streamed into an artificial pond that’s been covered to create an anaerobic environment. Microbes in the pond digest the starches and sugars in the manure liquid, expelling methane. That methane is then routed to an engine where it’s combusted in a way not entirely unlike gasoline, providing energy.

Straus has been dropping about 4,000 gallons of manure per day into his digester system, along with at least that much diluted by-products from the creamery, such as whey, for 13 years. Today, he says, the digester “produces all the electricity and most of the hot water needs for the farm.” (The engine that converts methane to electricity spits off a lot of excess heat, which is captured and used to heat the water the farm uses for cleaning purposes.) Because the whole system is so efficient, the farm actually produces more energy than it needs, which they get paid to pump back into the local energy grid.

With his own source of clean energy, the next step was an electric vehicle. Straus driven electric cars in his daily life since 2002, and also has small electric vehicles, like a golf cart and an ATV-like vehicle, that he uses on the farm. But heavy machinery is something totally different and much more difficult. The requirements of farm vehicles like mixers, tractors, trucks, and combines are not quite like those of your standard sedan – they have to be able to go very slow, they need enormous amounts of torque and power, and are also much heavier and power-demanding than cars.

Even the biggest companies haven’t fully gotten into the electric heavy vehicle game. John Deere has an electric tractor concept in the prototype stage. Tesla has teased an electric semi-truck. So in the absence of an easily purchased electric vehicle, Straus chose to go his own way and has spent nearly a decade working on his own electric feed mixer and distributor vehicle. And now it’s up and running, fully powered by energy harvested from manure.

Straus’s truck began as a 1990s-era International Harvester. Over the years, he and various contractors have replaced parts and rejiggered systems to convert it to electricity. It hasn’t been a perfectly smooth transformation; one attempt to use two coupled DC motors resulted in the destruction of one of said motors during a slow downhill trek. But after eight years of work, and the help of a local mechanic, Straus has the truck he always wanted.

There’s no reason this system should be limited to organic farming. Conventionally raised cows produce poop, too.

The newly electric vehicle is powered by the batteries from two wrecked Nissan Leaf electric cars and can make it through the day without running out of juice. It’s running at about 170-horsepower and 950-lb-ft of torque, easily enough to handle its daily duties. And if plugged in, it can charge its batteries while mixing feed.

The total cost of the retrofit was about $130,000, though Straus thinks as much as $30,000 of that could be avoided now that he understands better how to build it. The electricity, of course, comes from the methane digester. Straus estimates that he saves about $10,000 a year on fuel costs for the truck, all while removing 18 tons of carbon dioxide equivalent from the atmosphere.

“We’re trying to show that organic dairy farming can be part of a solution to climate change,” says Straus. Methane from livestock accounts for about 40 percent of greenhouse gas emissions in the entire country, and this project manages to take that extreme negative and turn it into a positive. Sure, cows release methane, but instead of fighting it, why not make it valuable? It’s also worth noting that there’s no particular reason this system should be limited to organic dairy farming; conventionally raised cows produce poop, too.

The major impediment to most farmers who want to follow Straus’ lead is cost. Methane digesters are wildly expensive.

“Most of the systems cost millions of dollars,” says Straus, though his was a relatively inexpensive $350,000, and he was able to secure grants to knock another $150,000 off the price tag. But even that is out of reach of most farmers, despite the fact that a methane digester like this could lower energy costs by $40,000 to $50,000 per year.

But Straus is helping to make systems like his more affordable. “We’re working with a company based in Washington state to build and operate methane digesters on farms,” he says. “Farmers need to farm and not be diverted by other enterprises that take time away from farming.” They’re imagining a set-up where a staff would come in and perform all the tasks needed to keep the digester going: running the separators, shoveling manure, and maintaining all the equipment. Straus is also talking to the state of California to look into ways to make it affordable for farmers to install these systems. “I think it’s a win-win, not only for the farmer but also a positive for the environment,” says Straus.