Indianapolis has an outsized food access problem, but a number of mission-driven urban farms are helping to turn the problem around. 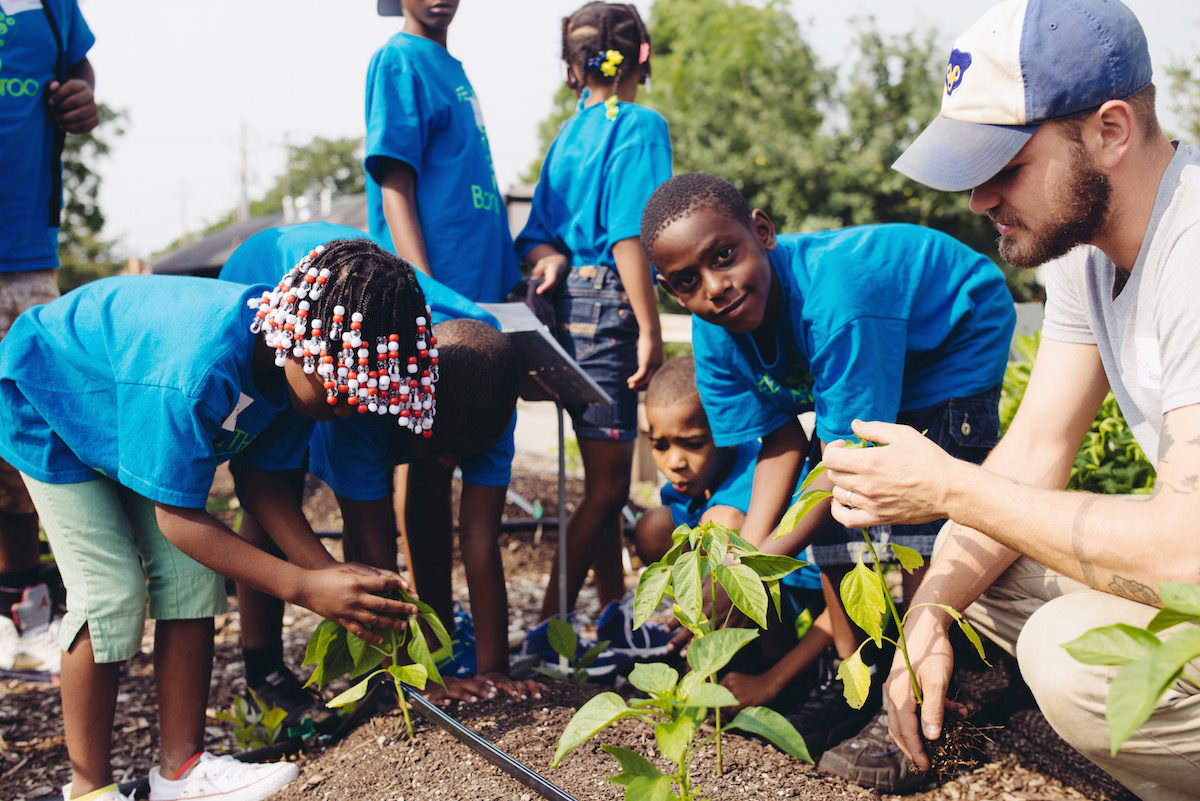 In this city of a little less than a million people, Indianapolis has an outsized problem with food insecurity. In 2014, it topped the real estate company Redfin‘s list of worst cities for food access. Over the last few years a number of diverse organizations have banded together to deal with the issue, creating unique partnerships that have resulted in an urban farm that donates all its produce to food banks, a restaurant – complete with micro-farm – where the proceeds go to feeding food-insecure students, and a high-tech hydroponic farm that provides jobs for folks who need a second chance. Modern Farmer spoke with several of the people involved in these projects to see how they are dealing with food insecurity in their city.

In 2011, Indy Urban Acres was born out of a partnership between the Indianapolis Parks Department, the non-profit Indianapolis Parks Foundation, Indiana University Health, Gleaners Food Bank, and with the support of The Glick Fund, Indianapolis Power & Light and CLIF Bar Family Foundation. According to Tyler Gough, the farm manager for Indy Urban Acres, these groups pulled together “whatever resources they had” to provide organic produce for the 150,000 food-insecure residents of the city. The 35,000 pounds of fruits and vegetables they grow each year on five acres of an eight-acre organic farm (the other three acres are used as educational space) goes to local food pantries.

“Sadly, for families in need, fresh produce, let alone organic produce, is simply out of reach,” Gough tells Modern Farmer in an email.

“Teaching people that they can have control over their own nutrition is the most important task,” – Tyler Gough, Indy Urban Acres farm manager.

Gough says getting fresh produce to food insecure families is just the “tip of the iceberg” for dealing with food insecurity. Beyond food deserts, economic issues, and the prevalence of unhealthy food options, education is the key. “Teaching people that they can have control over their own nutrition is the most important task,” he says.

Each year thousands of children come to the farm for tours and workshops so they can get to see food growing and learn how to grow their own. Gough hopes the kids leave Indy Urban Acres as future farmers who can “imagine the possibilities of green space in an urban environment.” 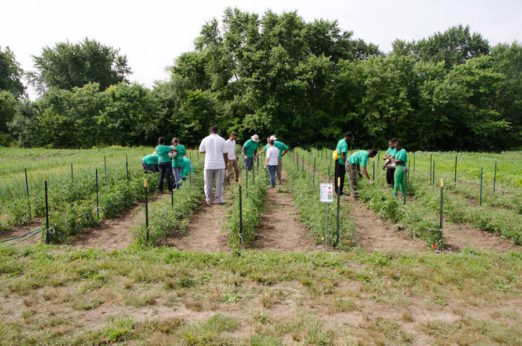 Students at Indy Urban Acres. Photo courtesy of the organization.

Like Indy Urban Acres, the Patachou Foundation and Public Greens Urban Kitchen – a restaurant and micro-farm run by the company behind the foundation, Patachou Inc. – education is intertwined with their mission of feeding children and young adults impacted by homelessness and hunger. The foundation, which was started by the restaurateur Martha Hoover in 2013, provides fresh, healthy after-school meals (and lunches in the summer) to students from Indianapolis-area schools.

According to Matthew Feltrop, the foundation’s executive director, about 87 percent of the student in the schools they serve come from low-income households. Many live in areas of the city with no access to healthy food, due in part to the closing of several grocery stores in these neighborhoods. This, and the added problem of unhealthy food choices that can lead to healthcare issues, have left many Indianapolis youngsters facing “an unparalleled health and hunger crisis,” says Feltrop.

But besides filling bellies, the foundation also teaches students how to make healthier choices through hands-on lessons that accompany the meals. The students learn about nutrition and how it impacts health, where their food comes from, and table manners, among other lessons, says Feltrop.

Public Greens, the foundation’s restaurant and micro-farm, is unique in that its profits and produce go to feeding kids through the foundation. Patachou teamed up with Growing Places Indy, a non-profit organization with a mission to empower individuals through urban agriculture, food access and education, to manage the micro-farm. 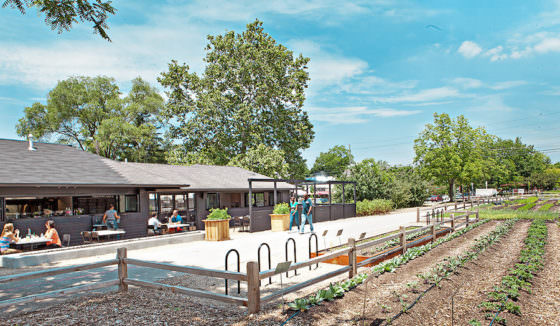 The city’s newest urban agricultural venture, Farm 360, was launched late last year with the twin missions of employing local folks, especially those who been incarcerated and have had a hard time finding good work, and repurposing blighted properties in the city’s Near Eastside neighborhood. The company is also growing vegetables using a hydroponic system that incorporates LED lighting, which uses 60 percent less electricity then traditional lighting systems.

The guiding light behind the venture is Jim Bloom, a former prison chaplain and staffing company owner, who saw first-hand the employment issues people who have served time often have. After developing a personal interest in hydroponic farming and helping launch an indoor farm in Ohio, he joined forces with Englewood CDC, a neighborhood redevelopment corporation, and several local business people to launch Farm 360 in Indianapolis. According to the company’s general manager, Chris Arnold, they currently have 15-full time employees, three of whom have previously served jail time, with plans to hire a total of about 25 employees (with an eye towards other hard to employ folks and those from the neighborhood where the farm is located).

“Jim always wanted to employ people in urban neighborhoods, many with historic background issues, and change food systems,” Joe Bowling, the co-director of Englewood CDC, a majority owner in Farm 360, tells Modern Farmer in a recent phone interview. “It was exactly what I felt like we needed in terms of the ability to create jobs and to produce food in what is a kind of food desert in our urban Indianapolis neighborhood.”

The farm is currently growing more than 25 different greens and herbs with plans to move into vine crops next year. They’re selling to several local restaurants, a large retail customer, and are in contract negotiations with a major school system and are in ongoing talks with two of the larger hospitals in the city, according to Chris Arnold, Farm 360’s general manager. They are in the midst of expanding the growing space in the 61,000-square foot space and have plans to open a second farm in the same neighborhood, and the intent of expanding regionally in the future, says Bowling.

Arnold believes Indianapolis is ahead of the curve as far as mission-driven urban agriculture is concerned. This view is shared by Gough, the farm manager from Indy Urban Acres, who says while he would like to think the city is leading the way in this area, he knows for sure that the community is trying innovative ways to end hunger. Both Indy Urban Acres and Patachou Foundation’s founder, Martha Hoover, have been recognized for the work they are doing. Last year Indy Urban Acres was given a $100,000 grant to help in their mission by the non-profit Impact 100, while Hoover was recognized for her work by Jefferson Awards Foundation. 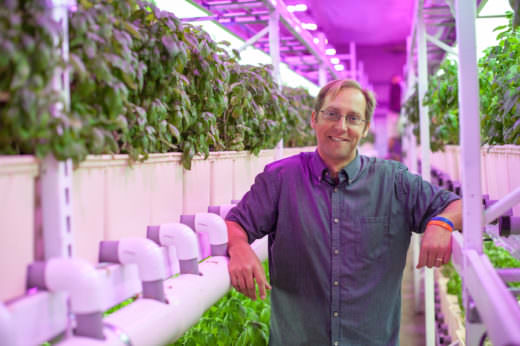