Caruncles, Breast Beards, and Snoods, Oh My! The MF Guide to Turkey Anatomy

One of the most interesting parts of writing about turkeys for our winter cover story was learning about their anatomy. It was when a farmer gave me a quick tutorial on all those dangly head appendages and the many physical differences than differentiate hens (females) from toms (males) that I really started to grasp the […] 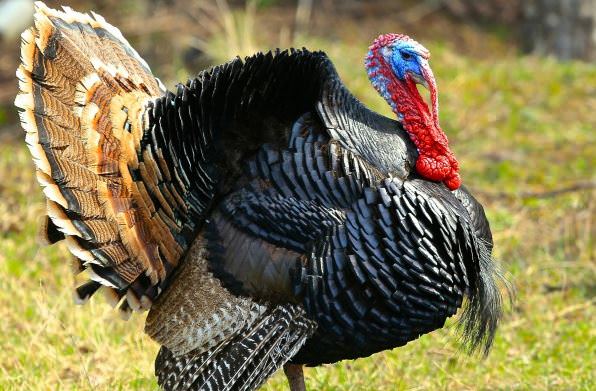 One of the most interesting parts of writing about turkeys for our winter cover story was learning about their anatomy. It was when a farmer gave me a quick tutorial on all those dangly head appendages and the many physical differences than differentiate hens (females) from toms (males) that I really started to grasp the world of turkeys – especially their social life. Here’s a few cliff notes on the topic to pull out at your next dinner party (maybe just not at the Thanksgiving table).

This is the fleshy appendage that extends over the beak. While it looks like a pint-sized version of an elephant’s trunk, the purpose of the snood is not to grab food, it’s to grab the attention of a mate. While mature female turkeys develop a short snood of their own (evolutionary purpose unknown), on males it eventually grows up to 5 inches; when a male is trying to impress a female, the snood turns bright red and elongates even further. The males with the longest, brightest snoods tend to attract the most mates. For reasons that remain unclear, snood length appears to be an indicator of robust genes in turkeys. For example, one study found that male turkeys with longer snoods have higher testosterone levels and are more resistant to coccidiosis, a common digestive ailment in poultry.

In the most general sense, wattles refer to fleshy appendages hanging from the neck or chin of many types of animals. Pigs, goats, chickens, and turkeys are all capable of growing wattles. With pigs and goats, the wattle is covered in hair and has no known biological function. With poultry, wattles are bare flesh, and are considered a sign of male vitality – dominant roosters and toms typically have the largest wattles in the flock. Just like the snood, wattles become engorged with blood and turn bright red during courtship, as well as to intimidate other males. Chickens have a pair of wattles dangling from their neck, while turkeys have a single, much larger wattle, which is also known as a dewlap.

The warty protuberances on the head of a turkey are called caruncles. Technically, wattles and snoods are types of caruncles, but on turkeys the term usually refers to all the flesh that is not a wattle or a snood. If you look closely at the caruncles around the skull, you’ll see a pea-sized orifice behind each eye, which are the turkey’s ears. The bulbous hunks of tissue behind the dewlap are called the major caruncles. These look like brains or intestines, depending on your preferred adjective. Although if you thought they were testicle-like, you wouldn’t be far off, as the larger the caruncles, the more testosterone a tom has. When male turkeys are aroused, the caruncles around the head and neck turn bright red, while those on the face turn a brilliant aquamarine blue. Female turkeys also have caruncles, but all three are smaller and remain a less noticeable fleshy pink color.

If the facial features aren’t enough for you to tell a hen from a tom, look at the legs. They’re not pretty to look at either in either sex (very scaly and reptilian), but male turkeys have a special claw, known as a spur, part way down the back of the leg, just a couple inches above the feet. On young males, called jakes in turkey parlance (less than one year of age), the spur is no bigger than a rose thorn. It grows a little bit more each year, and becomes more curved, eventually reaching up to 2 inches or more. The spurs are used for sparring with other males in an attempt to assert dominance.

Now for the feathered body parts. As male turkeys mature, they developed a clump of slender, fibrous feathers in the center of their breast, which is referred to as a beard or a tassel. A turkey’s beard resembles a horse’s tail, except it’s shorter and on the front of the body. Like the fleshy head appendages, turkey beards are believed to be an aesthetic feature intended to attract mates; beards become more erect when a tom is aroused. The longer the beard, the older the turkey – they can eventually grow to about 12 inches in length. Rarely, toms have multiple beards, which are aligned vertically along the breast, with the longest beards on the bottom and getting smaller as they go up. Some, but not all, female turkeys also grow beards, though they top out at about 6 or 7 inches.

Feathers and Their Functions

Feathers on male and female turkeys are essentially the same, at least when it comes to practical matters. They have short, downy feathers on their breasts and back for warmth. Their several layers of wing feathers, which provide loft for flight (though wild and heritage breed turkeys can only fly short distances, and modern breeds can’t fly at all): the outer layer is made up of “covert” feathers; then comes a layer of slightly longer “secondary” feathers; the longer “primary” feathers are closest to the body and hang down almost to the ground. There are two layers of tail feathers: the short “coverts” in front, and the much longer “rectrices” behind (up to 18 inches long), of which there are typically 18.

Female turkey feathers are usually white, black, or gray, perhaps with a few mottled markings here and there. On males, however, markings are much more pronounced and colorful, and include the characteristic striated patterns on the tailfeathers. Males weigh between 1.5 to 2 times as much as females, but they appear even larger because of their ability to poof out every feather on their body – which is known as strutting. Strutting is common behavior throughout the year, but is almost constant during the spring mating season. When strutting, the males flap their wings, fan out their tailfeathers in full display, and make a “gobbling” noise – making it very easy to tell who is pursuing who.

They’re amazing… When u get the privilege of raising one you would be amazed at how beautiful turkeys really are and they also have attitudes and seem to have many different feelings. Mine was very curious at everything I did and would let me know when he didn’t approve. I’m still emotional about not knowing if he’s alive n just decided he wanted to go or if the coyotes got him for it’s been a month now and I haven’t seen him ? I hope his photo post to this so you can see all the beauty in him

A diagram to go with the article would have been great

Good article! Thank you for posting!?

I used to be able to identify and distinguish between my four “Wild Turkey Boys” based on the characteristics of their snoods, caruncles, wattles, or lack there of. It’s become difficult now, since there has been such dramatic changes, since October 2020 until now. The one who inevitably became “Big Boss” developed full-on blue and red face, with an incredibly exaggerated snood. He was always attended by “Red,” named because of his very red, wattle, that had very circular shaped formations at the top on each side. Over the months, the four of them would show up with their harem,… Read more »

Popular
7 Smokable Plants You Can Grow That Aren’t MarijuanaBrian Barth
Agricultural Runoff Pollutes Well Water, a ‘Public Health Crisis In the Making’Madison McVan, Investigate Midwest
The Fertilizer Shortage Will Persist in 2023Shea Swenson
Move Over, Mezcal. A Sustainable Tequila Alternative Is Taking Over.Hollie Stephens
Why Don’t We Eat Turkey Eggs?Dan Nosowitz
Explore Modern Farmer
Related
Features, Food Security, Labor
The Rise of Virtual Farmers MarketsLeah Borts-Kuperman
Environment, Labor, Water
California Farms and Farmworkers Attempt to Recover From Record FloodsNaoki Nitta
Food Security, Labor, news
A New Egg Co-operative Has Hatched in the Western U.S.Lindsay Campbell
Food Waste, Plants, Technology
New Solar Panels Allow Farmers to See the LightNaoki Nitta
wpDiscuz
We use cookies on our website to give you the most relevant experience by remembering your preferences and repeat visits. By clicking “Accept”, you consent to the use of ALL the cookies.
Cookie settings ACCEPT
Privacy & Cookies Policy