The Case for Heritage Turkeys

Almost every turkey sold in the United States was bred to develop a grotesquely large chest. But there's a more human way to raise a holiday bird. Here's how. 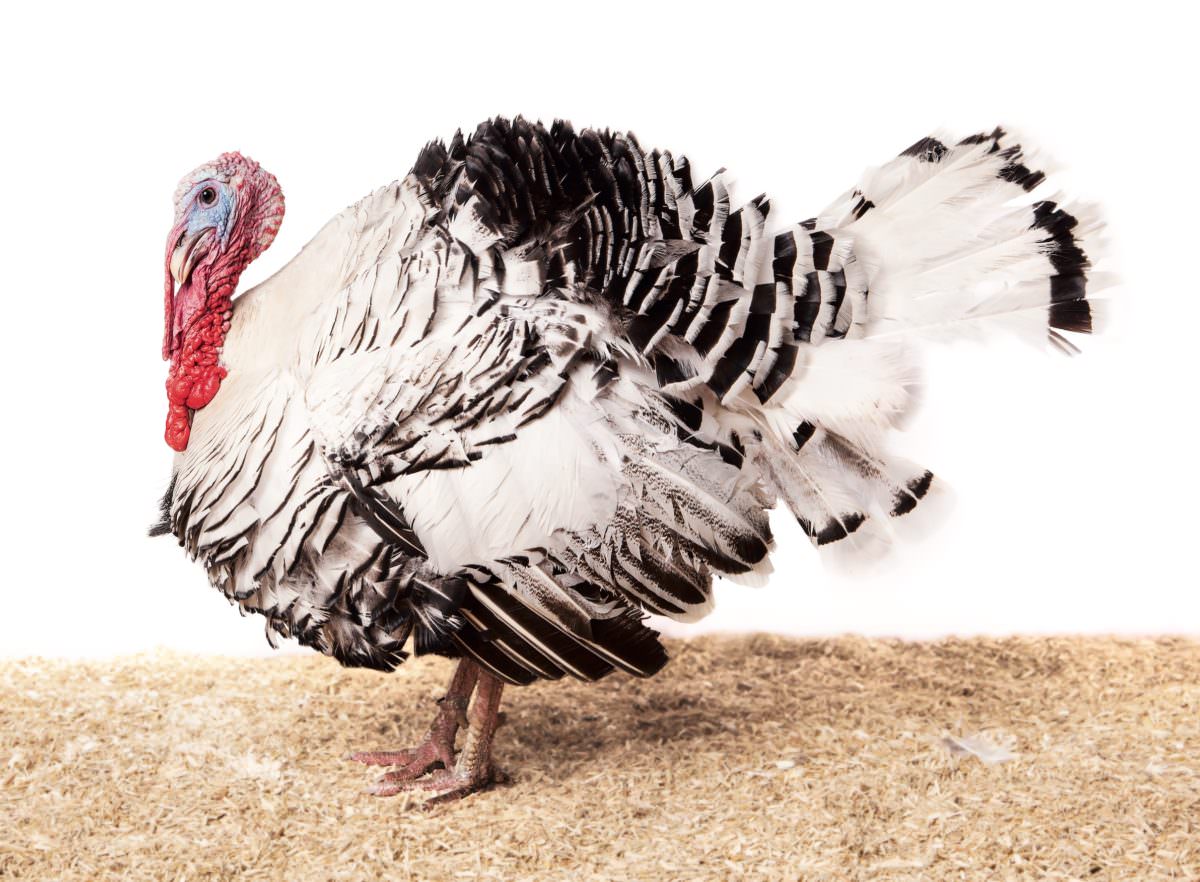 If Benjamin Franklin had gotten his way, the turkey might have become America’s national symbol. In a 1784 letter to his daughter, the founding father described the bald eagle as a “rank coward” of “bad moral character.” The turkey, Franklin wrote, “though a little vain and silly, [is] a bird of courage,” one that seemed more representative of the newly formed United States: “Eagles have been found in all countries, but the turkey was peculiar to ours.

Despite this ringing endorsement, the native fowl went on to develop a bad rap over the interceding centuries. Plenty of folks love turkey, roasted and smothered in gravy, on a holiday platter. But most consider the living, breathing birds dumb as doorknobs, so much so that “turkey” has come to mean “fool” or “failure.” And while it’s true that many domesticated breeds stare at the sky with their beaks open – giving rise to the urban myth that they unwittingly drown during rainstorms – the habit is, in fact, a harmless genetic quirk.

“Heritage turkeys are actually pretty intelligent,” says Marcia Stevers, who raises 25 of the birds at her Blue Haven Farm outside Toronto. “If they know your voice, they’ll come to you.” Heritage breeds, descendants of the wild turkeys that once roamed North and South America, were all established before the advent of factory farming. They grow at a moderate rate – reaching market weight, between 10 and 28 pounds, in around 28 weeks – which allows their bodies time to develop properly.

Stevers concedes that the birds on most Thanksgiving tables are a totally different story. More than 99 percent of the some 230 million turkeys produced in the United States each year (by giants like Butterball and Jennie-O) are Broad-Breasted Whites, bred to reach a shocking 40 pounds within 20 weeks of hatching – at the expense of virtually every other turkey trait. Up to 70 percent of their heft is packed in the chest, which looks more like a giant potbelly and weighs the birds to the ground. As a result, they can’t fly, mate, tend to young, or even walk properly.

In the early 2000s, Slow Food USA added a handful of heritage turkeys to its “Ark of Taste” list of endangered foods, and unleashed a marketing campaign that championed the historic breeds as a humane alternative to ubiquitous Broad-Breasted Whites. Suddenly, heritage turkeys were going for $10 a pound, up to 20 times what a Butterball costs at Walmart. The surge sparked a gold rush among artisanal producers, who eagerly stocked their pastures with Narragansetts, Slates, Royal Palms, and their fine-feathered heirloom friends. 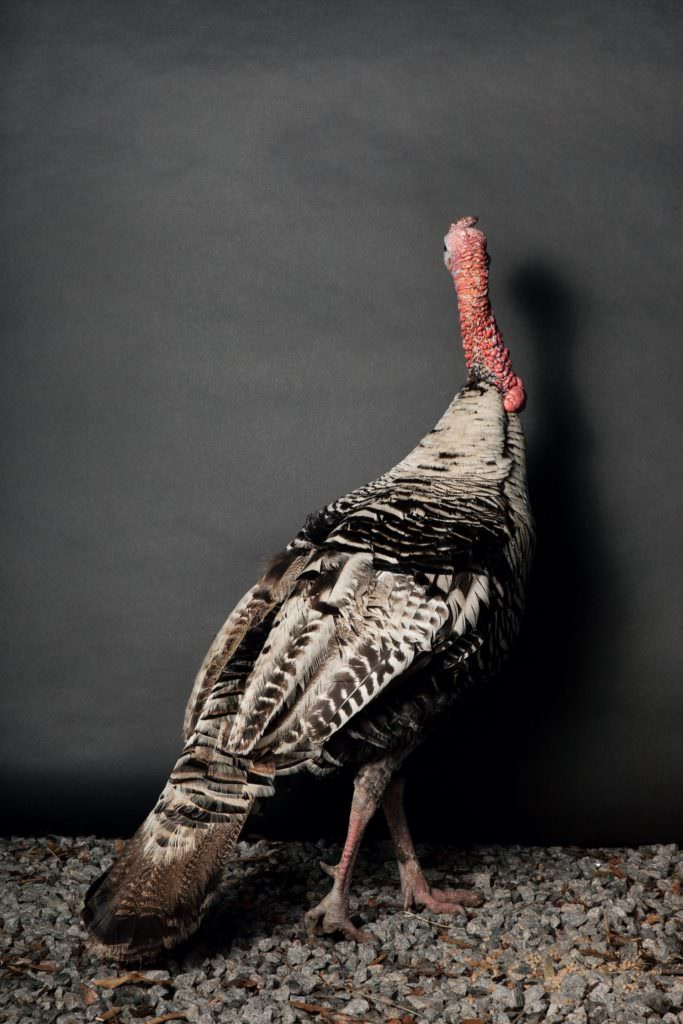 In one way, the move paid off. According to the Livestock Conservancy, America claimed only 1,300 heritage turkeys in 1997; today, that number sits at around 30,000. But talk to the farmers who care for these creatures, and they’ll quickly run through the math. Heritage hatchlings cost twice as much as baby Broad-Breasted Whites and take longer to reach roughly half the slaughter weight. They also yield a lot less white meat. And while sophisticated palates tend to prefer the gamy, richly flavored legs and thighs, most Americans have become accustomed to those hulking breasts. At the end of the day, Stevers, whose parents also farmed turkeys, says she’s more motivated by tradition and the ritual of husbandry than profit.

“People used to raising chickens are often surprised to find that newborn turkeys are not as robust as chicks,” says Matthew Kmetetz of Breezy Knoll Farm in Bethlehem, Connecticut. “They’re highly temperature- and draft-sensitive, and prone to disease.” To lessen the chance of loss, Kmetetz sells poults at four weeks of age, instead of the day-old hatchlings typically on offer – though you’ll pay twice as much for the privilege. He charges $15”“$20 apiece for his seven heritage breeds, available beginning in March. The timing ensures that they’ll be at least seven months old, the standard slaughtering age, in plenty of time for Thanksgiving. For a wide selection of day-olds, we recommend porterturkeys.com, which specifies a minimum order of 15 – a good thing, since newborns need a gang to stay warm during shipping, and they grow into social animals.

Unlike chicks, which come in pre-sexed runs separated by gender, poults are priced individually, and their sex is not determined. (Most farmers can’t accurately tell the difference until turkeys are around six months old.) The toms will yield more meat, but the daintier hens eventually produce eggs.

If you start with day-old poults, you’ll want to keep them in a brooding pen for at least the first four weeks. To lower the likelihood of chilly hatchlings crowding in a corner and smothering one another, choose a round pen, about 18 inches tall, that grants each bird 1 square foot of space. (A kiddie pool or cardboard ring will do the job.) Situate it in a draft-free barn stall or shed, and spread 2 or 3 inches of pinewood shavings in the bottom (not sawdust, which turkeys may mistake for food, or newspaper, which becomes slippery and leads to bowleggedness). Outfit the brooder with a thermometer and hang a heat lamp above it on a chain, adjusting the height until the temperature is 100 degrees at poult level. Once a week, raise the height of the lamp to drop the habitat’s temperature by 5 degrees. 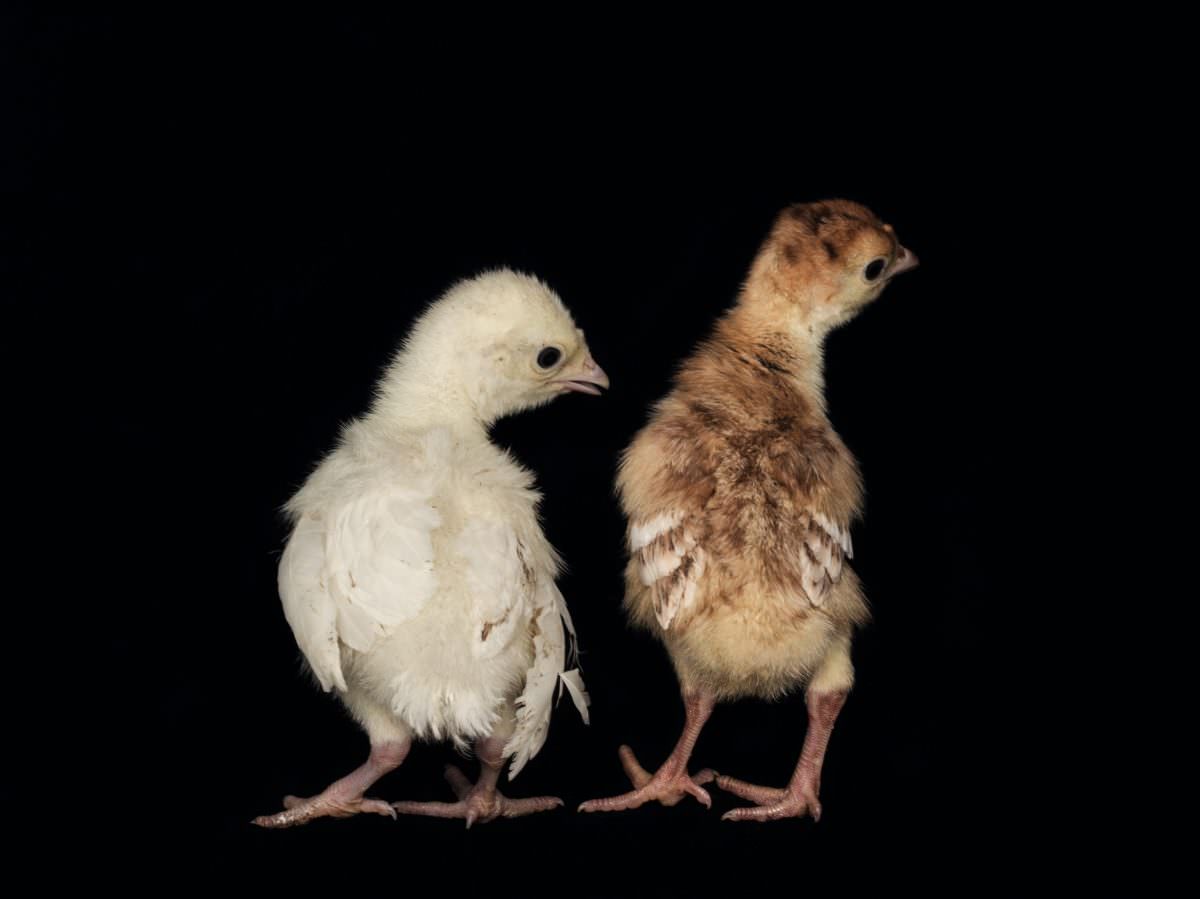 “Poults are a bit like newborn babies,” says Kmetetz of the amount of oversight required. “A lot of people think, ‘Oh, how cute!’ and pull a poult from the brooder to play. Well, in 20 minutes, that bird has cooled down, and he’s gone.” You’ll know it’s safe to remove the brooding pen and start handling the little guys and gals when they begin jumping over the barrier, normally in a month or so. But keep them in the barn stall or shed, with the heat lamp, and continue to raise the chain, decreasing the temperature by 5 degrees every week until they reach six weeks of age. The same goes for month-old turkeys (in which case you’d start at 80 degrees), if you order those instead.

During their first six weeks, poults will require turkey-specific “starter” feed, with 24”“28 percent crude protein, in the form of crumbles or wet mash to make nibbling easy. (Find all supplies at efowl.com; coyote creekfarms.com has a nice organic selection.) Because dehydration can claim a newborn in mere hours, teach them to drink by dipping their beaks in the lip around the water source. You can use waterers and feeders designed for chicks, as well as generic poultry grit. Sprinkle the latter over food (if it’s not already incorporated) from day one to help the toothless birds grind food in their gizzards.

“There are quicker ways to get a turkey to the table,” says Stephanie Lennik. “But my philosophy is to let them do what they would do naturally, which is forage.”

Your six-week-old birds will also need a new home. A chicken coop will suffice as long as it provides a minimum of 5 square feet per bird and any doorways measure at least 2 feet across. For larger flocks, a simple, three-sided shelter, with
wire mesh forming the fourth wall (for ventilation), is enough to offer protection against the errant coyote or fox. Inside, mount roosting bars – horizontal 2-by-4s, with the wide side parallel to the door and 24 inches above it – to satisfy the birds’ instinct to perch after dark. The bars should be long enough to allow 15 inches per bird. Beneath them, a wire-mesh floor will let droppings fall through. Elsewhere in the shelter, sprinkle pinewood shavings for bedding.

During the day, turkeys should have access to an outdoor run – figure at least 11 square feet per bird – to exercise natural behaviors like scratching and pecking at the dirt. To make it predator-proof, enclose the entire run with wire mesh. The mesh should extend over-head – hawks love to make a meal of young turkeys – and underground, by at least 9 inches, to keep weasels and mink from burrowing underneath.

Plenty of farmers, especially those with a large number of birds, take their chances and let the fowl loose in pastures, fields, or forest each morning (in this case, a density of 100 birds per acre is typical). Left to their own devices, omnivorous turkeys eat grass and other vegetation, insects of every description, seeds, acorns, and many types of fruit. 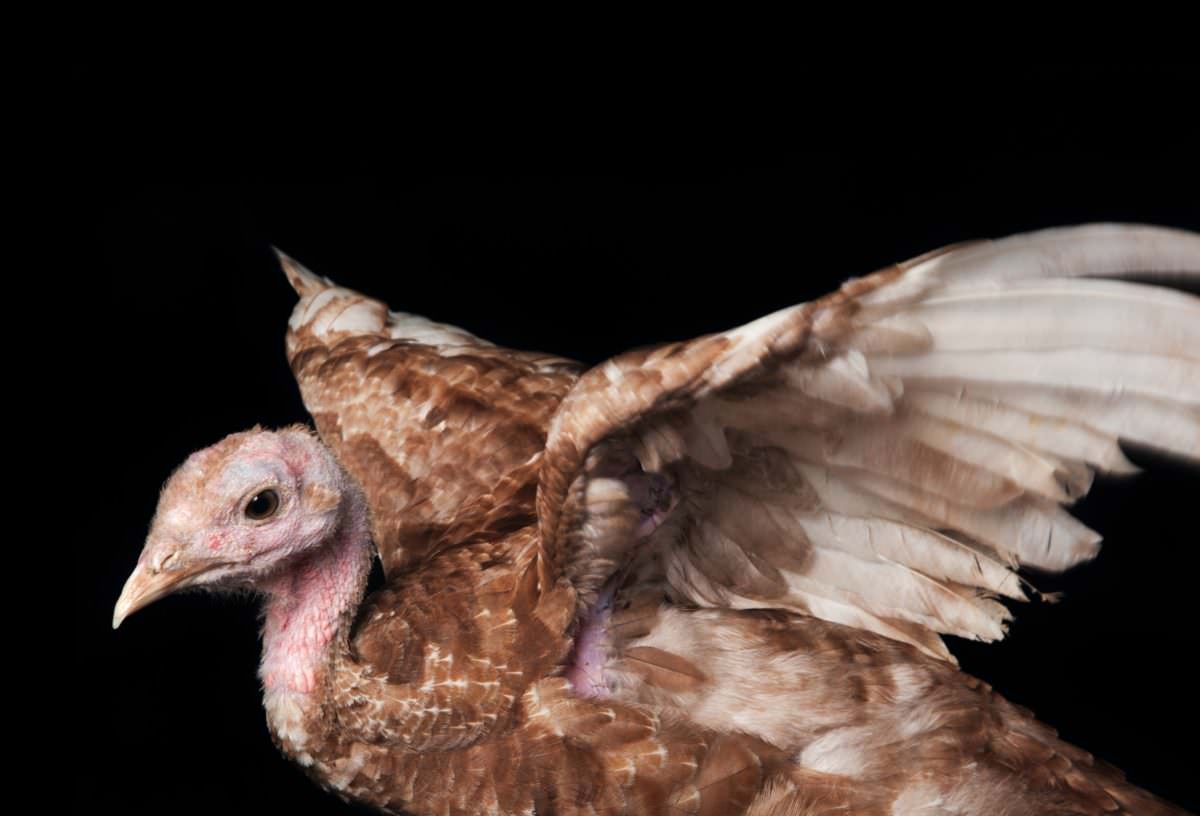 Stephanie Lesnik, of Field House Farm in Madison, Connecticut, raises 50 Royal Palms and Narragansetts on pasture, and she believes the activity keeps them healthy and happy. “There are quicker ways to get a turkey to the table,” she admits. “But my philosophy is to let them do what they would do naturally, which is forage.” She provides feed only once a day, at dusk, to lure them inside their shelter at night.

Keep in mind that, unlike their industrial counterparts, heritage turkeys are skilled fliers. So, if they’re not confined to a run, clip the outer 5 inches of the wing feathers at least once a month, a painless procedure carried out with kitchen scissors. 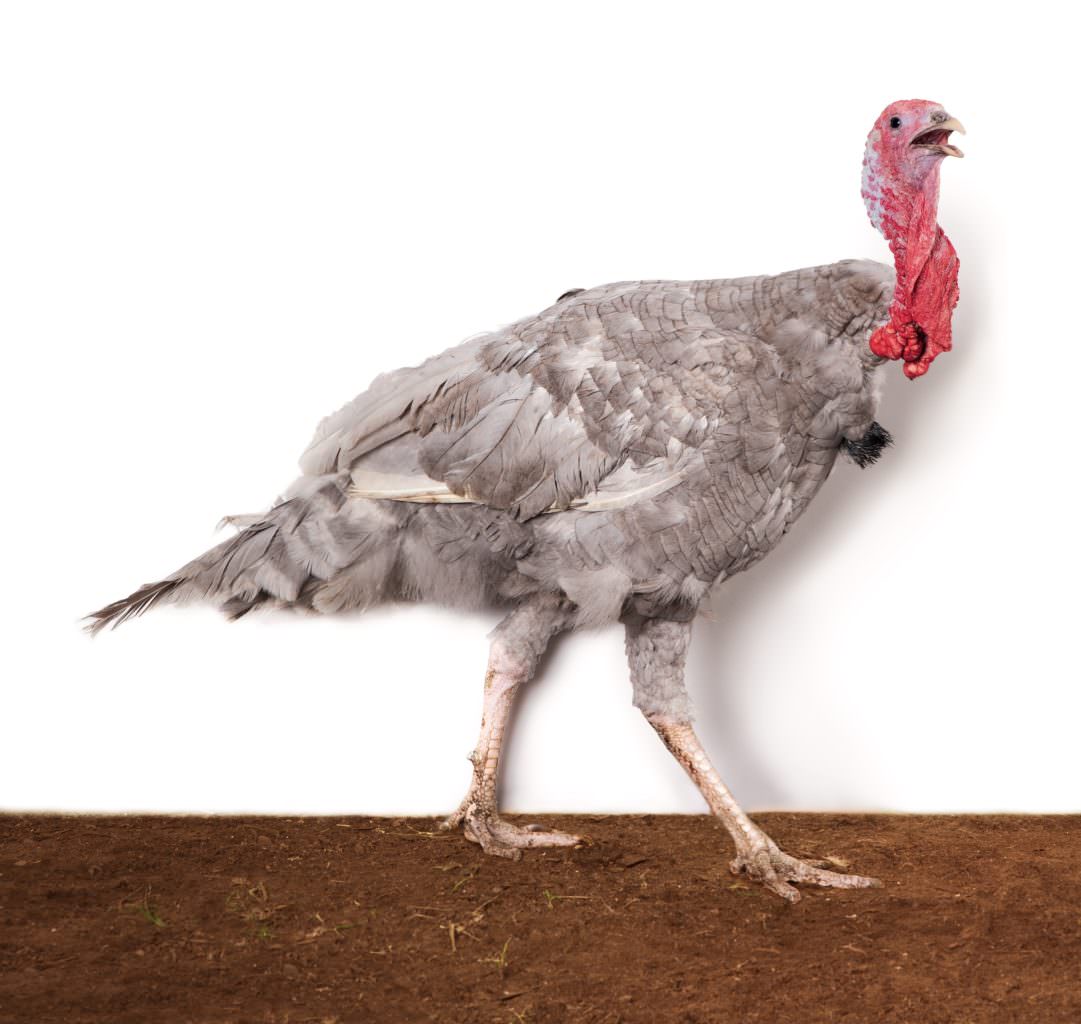 “Our free-range turkeys actually co-mingle with other livestock, including chickens, and we’ve never had a problem,” says Lesnik. Mixing the two types of birds comes with certain risks, however, as chickens carry blackhead, a disease that’s lethal to turkeys. To lower the chance of infection, avoid cross-contamination: Never wear the same boots in the turkey habitat following a trip to the chicken coop, and disinfect any equipment transferred between the two areas.

You can guard against coccidiosis, a disease caused by parasites almost universally present in soil, through good hygiene. Clean watering devices daily and maintain dry bedding inside the shelter. Medicated turkey feed includes an antibiotic that targets the common bug, though organic standards do not permit it. Organic farmers may, however, employ
a coccidiosis vaccine, typically administered to poults.

Come late fall, it’s time to orchestrate a peaceful end. And precisely how small-scale farmers handle this depends largely on location. In some municipalities and most rural counties, farmers can legally process turkeys on-site for home consumption. If you plan to sell the meat, you’ll likely need to locate a state- or USDA-inspected poultry-processing facility. (For help finding a local slaughterhouse or making sense of your area’s rules, go to nichemeatprocessing.org.)

In Connecticut, Lesnik can process her turkeys on-site, without USDA inspection, if her customers buy a live bird by plunking down a deposit the previous spring. “Some years, I barely break even,” she admits, though her turkeys play an important role in the farm’s ecosystem, nabbing fallen fruit, eating insects, and scratching the soil.

She maintains that a huge part of the challenge is consumer education. “You have to teach people that the heritage bird they’re getting is not the Butterball they’re used to,” Lesnik explains. “The physical contour is different. They’ve got these huge, muscular legs, because they’ve been running around.” And, of course, there’s a lot less white breast meat, compared with the grocery-store competition.

Regardless, she prefers to focus on heritage breeds. “Initially, we tried raising Broad-Breasted Whites, but I found them to be painfully dumb. They died every which way – they’d get stuck in branches and accidentally hang themselves. Heritage turkeys are challenging in their own right. They’re high-maintenance. But raising them is much more rewarding.”

Learn to cook them properly—not over 165 degrees. Don’t let them get dry! If they have been grown long enough they’ll have a nice layer of fat, which will help. If you are skittish about trusting one for Thanksgiving, get a store-bought one too, and cook that one in a counter-too type roasting oven, as insurance. One thing you will notice immediately if you’re adept at making gravy—the heritage bird’s gravy is MAGNIFICENT! Next year you might opt for 2 heritage!