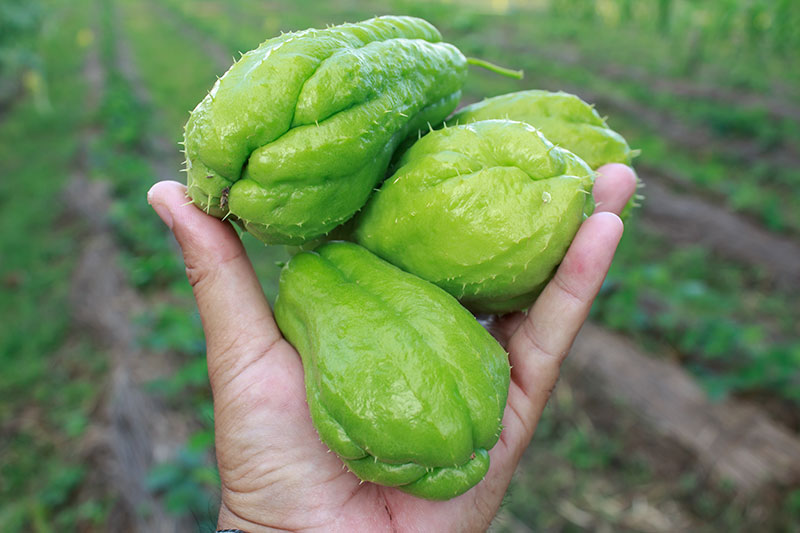 The mirliton is a member of the cucurbit squash family, and is the fruit of a heavy, hearty vine that loves to climb. It’s unique: rather than plant seeds, you plunk the entire vegetable in the ground since vines won’t sprout without the flesh – in fact new plants will sometimes begin to grow directly from the vegetables while they’re still on the vine.

So how did mirliton become a stalwart of New Orleans cuisine? We have to go back thousands of years when the chayote was a staple of the Aztecs and Mayans, making its way out of Mesoamerica by way of Spanish explorers. The vegetable landed in New Orleans sometime in the mid-1700s when the city was under Spanish control. The late 1700s saw the arrival of French-speaking, mirliton-calling, chayote-eating immigrants from the Canary Islands, known as Los Isleños, whose French name for the squash stuck. Now mirliton (mel-uh-tawn or mer-leh-tawn, depending on where in New Orleans you’re from) is still the name used by most locals.

They’ve long been a pedestrian food, mainly used to stretch proteins; allow them to feed more people. With New Orleans’ proximity to water, these proteins generally take the form of fish. The mirliton’s somewhat tough exterior and large seed-space practically begs to be stuffed Traditionally that’s done with crawfish, shrimp, andouille sausage, or a mixture of the three, combined with the seasoning trinity of onion, bell pepper, and celery with breadcrumbs. The veggie’s also made its way to the holiday table, thanks to its season falling in late autumn; mirliton dressing is a local holiday favorite.

Like most things native, or near-native to New Orleans, the city made the humble squash her own, and holds a neighborhood festival each November celebrating the gourd. Traditional dishes include stuffed mirlitons, dressings, and casseroles. Mirliton tacos, bread pudding, and lemonade are on-deck for more adventurous eaters.

Mirlitons were often traded between neighbors until the popularity of chain-link fences declined (chain-link served as a great trellis for the vines) and Hurricane Katrina’s storm water nearly wiped out the traditional local varieties. Thankfully, Lance Hill and other local enthusiasts have been working to revive the popularity of the heirloom varieties with Crescent City gardeners, which are generally grown without pesticides or fertilizer since they’re so suited to New Orleans’ unique clime.

You can find these vegetables in most large grocery stores, throughout the country – particularly Mexican bodegas – usually under the chayote moniker. If you live in a warm, coastal area, you may find them at your local farmers market or, you can try your hand at growing them yourself.

It’s an easy-growing, perennial vine suited for USDA zones 7-11 and best when planted mid to late March, after the last frost. Hearty, heavy mirliton vines need a fence, trellis, or other structure to climb on, at least six hours of sun a day, and to be planted in a mound or, at the very least, the highest spot in your yard. Hand-till the soil of your selected spot, removing any rocks or other debris to a depth of 15 inches. Add a 4-inch layer of manure, compost, or other organic material, working it through the entire tilled area.

Remember, the entire mirliton should be planted (mirliton seeds won’t germinate without the flesh), on their sides with the smaller, vine-end slightly higher than the bottom. The fruit should be covered completely, except for the very tip of the vine end. Multiple mirlitons should be planted at least 10 feet apart.

Mirlitons are ready to harvest thirty days after pollination, usually sometime between October and December. The best tell for ripeness is the skin’s willingness to bruise under the pressure of your thumb: If the skin bruises, it’s not ready. Wait to pick until the mirliton is firm to the touch and doesn’t bruise.

My wife is originally from Mauritius, where they call this vegetable “chou-chou”. They cook it in a white sauce or in a casserole of beef.

The Los Isleños community in New Orleans—from the Canary Islands—is Spanish speaking so it seems strange they would have been the origin of the French term “mirliton.” I don’t think that is true. Of course, New Orleans was a French colony and had many French speakers once so that perhaps led to the name mirliton.

Thank you… I have a cookbook that was written by Miss Lucy Henry Zaunbrecher.. She has a recipe for mirlitons…. I haven’t ever heard of them. I live in Iowa… Now I wish I could live in the south just so I could try the recipe.. They sound like they would be delicious
….

In Honduras Mirlitons are called Patastes. Every day stable. When stuffed they are called Chancletas.

Hi – nice article, thanks. A word about planting – people down here in Misiones, Argentina, where mirlitons (or xu-xu, as they’re called here) are a common seasonal veggie, swear that you have to plant two facing each other for them to grow. I have had success heretically planting single ones, but there might be something to the idea. Best to store them overwinter then plant out when they start to grow roots and sprout. When they start they grow very fast so be ready. Have also planted in pots with canes to train them on when they get to… Read more »