Farm Confessional: How I Nearly Lost My Goats to Mexican Drug Dealers

A true story of three goats on the lam. 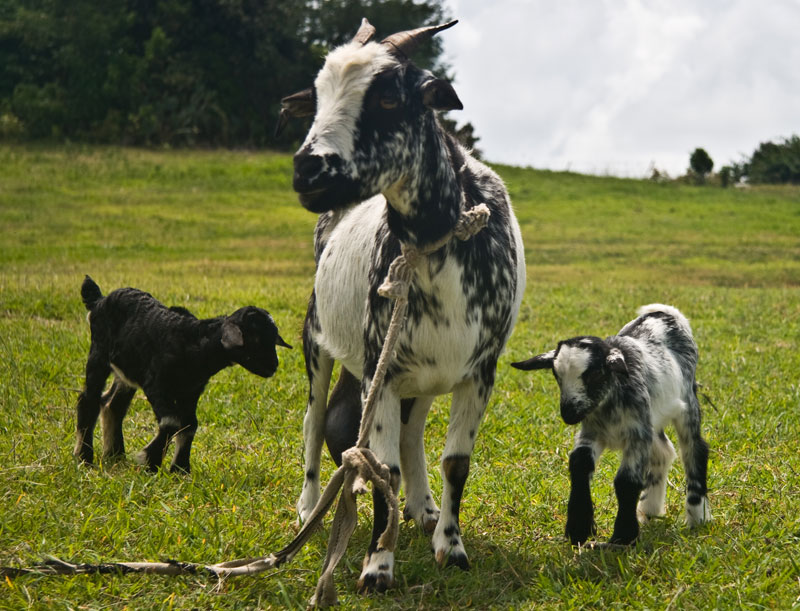 My stomach muscles curled into a tight knot over the next 30 seconds as my mind pieced together the dismal fact that Rose, Clover, and Daisy, my newly purchased Alpine dairy goats, were not playing hide-and-seek in the woods, but were on the lam. My immediate impulse was to go across the street to see if Tim, my 70-something farmer-neighbor, had seen them. I’d been gone all day, but Tim was typically home working in his fields along the street, giving him the perfect vantage point to keep tabs on everything that happened on our semi-suburban, semi-agricultural block.

“Those were your goats?” he said in his southerly cadence. “I helped a woman load ’em in the back of her truck this mornin’. They were just standing out in the road.”

Tim was perhaps the most sincere, kind-hearted man I’d ever known, and I had no reason to think he was pulling my leg. As he continued, green spittle dribbled from the corner of his mouth where a wad of tobacco bulged in his jowl. “Was a Mexican woman from ’round the corner. She didn’t speak English and I sure don’t speak Spanish, but I know that she and her family keep goats so I figured they were hers.”

Well that was good news. A friendly neighbor had rescued them and they were no doubt safe. I told Tim I would get in my truck and head over there. He said he would come with me, but that there was something I should be aware of first. Those neighbors, he said, pausing with a look that was half guilt, half dejection, “everybody knows they’re drug dealers.”

It turns out they were not just selling pot on a casual basis; they were serious smugglers. Or so said Tim’s friend John, another neighbor I’d never met – who happened to be the sheriff and live next door to the family of Mexican drug dealers who were now also apparently guilty of stealing my goats. Members of the local police department had been conducting surveillance from the bushes along the property line between John’s house and theirs. He said they hoped to have enough evidence to do a raid any day now.

None of this made my plan of strolling up to their front door and demanding my goats back seem like a good idea. John seemed very tense about the whole thing. Clearly, these were the sort of drug dealers that were likely to be armed and unlikely to be receptive to strangers knocking on the door. Their property was surrounded by a six-foot fence, and the house was set back at least 200 feet from the road behind a heavy black gate; the kind movie stars have. There were cameras in the trees along the road in front of their property.

Mama Rose and her two suckling kids had gotten themselves into a heap of trouble.

Mama Rose and her two suckling kids had gotten themselves into a heap of trouble.

We couldn’t see the goats from John’s bushes or from the road, so Tim suggested we walk over to the neighbor on the other side of the drug dealers to have a look. There they were, looking absolutely terrified, huddled together on one side of a small pen with a few other scraggly goats gazing lazily at them from the other side. The trio bleated up a storm when they saw me. These were my babies; the bond between a goat and the man who milks it is indescribable.

My heart sank when I saw what lay in the woods not 50 feet from where my goats were penned. Bones. My goats were for milk, goddammit. Obviously this family’s herd was for meat.

I eventually got my goats back, though it took a week. One very anxious week. I left a note in their mailbox, asking in the most polite and diplomatic way I could muster with my kindergarten level command of the Spanish language, if they would please call me to set up a time when I could come by to pick up my goats. The phone never rang. John suggested I go by at 7:15 a.m., which is when the family brought their two kids down the driveway to catch the school bus each morning. He said he would meet me there in case there was trouble. Unfortunately, school had let out for the summer the week before, so we ended up standing there awkwardly under the watch of their cameras, waiting to no avail.

Then one day I drove by and saw the woman with her kids in front of the house. I yelled from the gate and after about 10 suspenseful minutes, she sent her daughter, who looked to be about 12, down to talk to me. The girl spoke perfect English. A short time later, after loading my goats while the mother stared silently and unhelpfully at me from the other side of the yard, Rose, Daisy, Clover, and I returned to the soothing alfalfa scent of my little white barn. Never again did I leave home without checking the latch on the pasture gate.

Brian Barth is a contributing editor at Modern Farmer. He used to raise goats, chickens, pigs and other critters on his farm in Georgia. But now he just writes about farming.