Strawberries + Pesticides: How California’s Farmers are Looking for New Solutions

Strawberry fields expose thousands of children on the Central Coast of California to toxic pesticides. Luckily, researchers and pioneers are forging new and safer ways to grow this beloved crop. 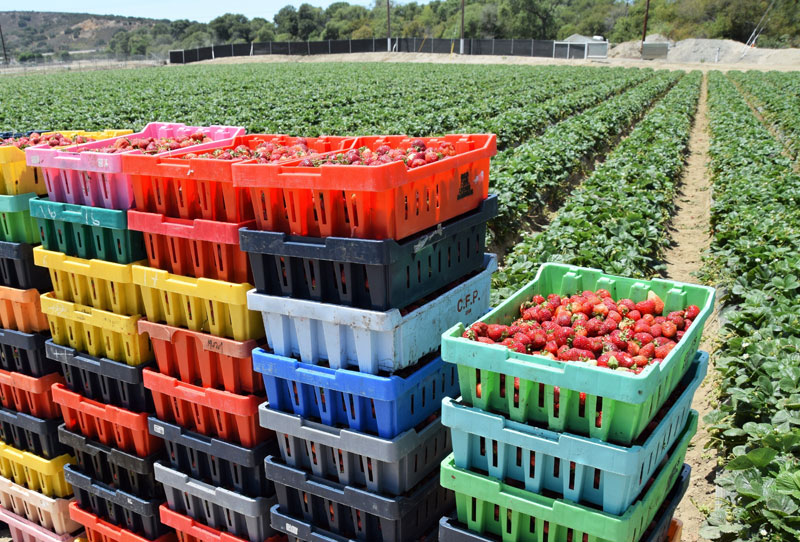 It wasn’t until I moved to the Central Coast of California, a big strawberry growing region in a state that grows 88 percent of American-grown strawberries, when I discovered that the reality of strawberry production was less idyllic than I thought.

The problem with strawberries has to do with pesticides. Year after year, the Environmental Working Group lists strawberries as one of the “Dirty Dozen,” which are the 12 fruits and vegetables with the highest pesticide residue as documented by the US Department of Agriculture.

Strawberries are irresistible to pests, especially soil-borne pathogens. Most pesticide comes before the crop is even planted in the form of soil fumigants. The two most common are 1,3-Dichloropropene (1,3-D) and chloropicrin, both of which are banned in the EU. The applications are quite a sight to see: Every fall, fields are tilled, sprayed, and then covered with giant tarps. Many of these tarps are clear plastic, leaving thousands of acres to look like they are wrapped in giant rolls of cellophane.

The tarps, called Totally Impermeable Film, or TIF, help prevent environmental contamination, but pesticides still create problems for Central Coast communities. The fumigants have shown up in the community at levels of concern: In 2012, a Department of Pesticide Regulation study found 1,3-D at 0.16 ppm, in Watsonville. Prolonged exposure to 1,3-D at a level above 0.14 ppm is considered carcinogenic. And, in 2014, the Department of Pesticide Regulation published a study that found chloropicrin exceeded “safe” levels by 40 percent in Salinas. The Pesticide Action Network then conducted a study at a private residence in Watsonville where they found chloropicrin as high as 7.9 ð›/m3, which is four times above the EPA’s 1.8 ð›m3 level at which they believe there will be negative health effects.

These pesticides then drift into schools. According to a 2014 California Department of Public Health (DPH) study, Monterey County tops the charts in heavy pesticide use near schools. In a report by the Pesticide Action Network (PANNA), scientists from the network gathered research linking pesticide exposure to cancer, disrupted brain development, birth defects, early puberty obesity, diabetes, obesity, and asthma. “Children today are sicker than they were a generation ago,” the report says. “Our assessment of the latest science leaves little room for doubt: pesticides are one key driver of this sobering trend.”

Latino children are 320 percent more likely than white children to go to a school near heavy pesticide use.

This exposure is distributed along racial lines, as Latino children are 320 percent more likely than white children to go to a school near heavy pesticide use in Monterey County, according to the DPH report. “Latinos still bear the disparate burden of a pesticide regulatory system more protective of profits than human health,” said Mark Weller, program director for Californians for Pesticide Reform (CPR).

Weller, along with Safe Strawberries Monterey Bay, CPR, and PANNA, is one part of an effort to create a one-mile pesticide-free buffer zone around schools. “Scientific research indicates that a one-mile buffer could prevent drift threats from the most acute incidents, but also could better protect children from long-term health impacts of exposure, such as cancer, developmental delays, asthma, and behavioral disorders including ADHD and autism,” says Weller.

Of course, all of this pesticide use cannot be pinned on the strawberry industry alone; the Central Coast is home to many crops that are sprayed with pesticides. And, spraying is regulated. “To ensure the wholesomeness of our product and the safety of berry consumers, any pesticide used must be in compliance with federal and state laws,” says a Driscoll’s spokesperson via email.

But are There Other Options?

You could always just avoid pesticides all together.

“Well, this is it,” says Jim Cochran as he and I unload from his dirty SUV and gaze out on a few acres of young strawberry plants. Instead of the common monocultures, these strawberries are surrounded by vegetables, alfalfa, and native vegetation.

Jim Cochran is the owner and founder of Swanton Berry Farm in Davenport, CA. In 1987, Swanton Berry became the first CCOF-certified organic strawberry farm in the state of California. 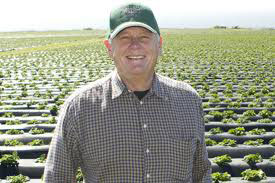 Cochran, who spent his early career growing conventional strawberries in Salinas, was curious about organic agriculture. He had read Rachel Carson’s Silent Spring and had an experience with pesticide contamination that left him feeling ill for a few months.

So, when he got his own land in 1983, he and his early farming partner made what Cochran jokingly calls a “half-hearted attempt” at both conventional and organic berries, planting half of their land in each.

And, much to his delight, it worked out. “That’s what made the difference for the industry,” says Cochran. “Other growers said ‘these guys know how to grow conventional, but they switched to organic.’” And thus, the organic strawberry industry was born.

Although Cochran made his name as the strawberry guy, 72 of his 85 acres are actually in vegetables. This allows him to do an intensive seven-year crop rotation, which mitigates soil-borne pathogens and pests. Many diversified organic growers have replicated this pattern.

But for farmers who only grow strawberries, that kind of rotation is not an option. Luckily, researchers at the University of Santa Cruz in California (UCSC) are pioneering new methods.

I spoke with one UCSC researcher, Dr. Joji Muramoto, who is one of the leading researchers on Anaerobic Soil Decomposition, or ASD. The process is like in-place composting: Farmers spread a deep layer of a high carbonaceous material like rice bran over beds, cover them with black plastic, and water them with drip lines. The approach is akin to taking probiotics instead of antibiotics to treat an infection: The rice bran’s decomposition creates an environment where the harmful soil pathogens cannot survive but beneficial ones do.

While ASD has its drawbacks – both increased cost and water use – results are encouraging: Muramoto has published five different studies that show ASD fields producing 99 percent of the yield of fumigated fields.

Researchers and farmers are also experimenting with mustard-seed meal. After the seed meal is applied and turned into the soil, it produces high concentrations of isothiocyanates, or ITCs, which ward of soil pathogens.

Research is also happening within the industry: Driscoll’s, which distributes both conventional and organic berries, has its own research team. This team has enabled them to create one of the only certified-organic nurseries, guaranteeing organic starts for all of their organic growers.

But, even with advances, organic strawberries still only make up 9 percent of total strawberry production in the United States. Groups like Safe Strawberries Monterey Bay and Californians for Pesticide Reform are hoping more farmers will adopt organic methods to decrease use near schools.

For farmers, however, the issue is economic. “Strawberry growing is expensive and it’s risky to change your growing methods,” said Cochran. Farmers are hesitant to try it when they are not sure what yields or markets will look like.

When they do switch to organic, it’s strongly consumer driven: Organic strawberry production nearly doubled between 2012 and 2014 jumping from 1,776 acres to 3,279, according to the California Strawberry Commission. Muramoto calls this the “Wal-Mart Effect,” explaining that the precipitous increase has to do with when large retailers like Wal-Mart and Costco started selling organic strawberries.

Organizations, pesticide regulators, and farmers will continue to duke it out over the use of soil fumigants, a battle which is unfortunately waged on the bodies of school children. In the meantime, as Muramoto reminds us, “consumers have a part in it. You vote with your dollar.”

And in this case, you can know that those organic berries may have made a healthier school day for Central Coast children.

It is necessary regardless of cost incurred that we protect and leave a more healthy industry for our children and grand children. We can never return to the previous methods of crop production based on profit Alone.