From Factory Farmer to Something Much Smaller: The Lengthy Roots of Long Roots Farm - Modern Farmer
Animals, Lifestyle, MTMF

From Factory Farmer to Something Much Smaller: The Lengthy Roots of Long Roots Farm

The grandson of one of Virginia's first - and eventually most major - mass-commercialized turkey farmers steps out on his own. 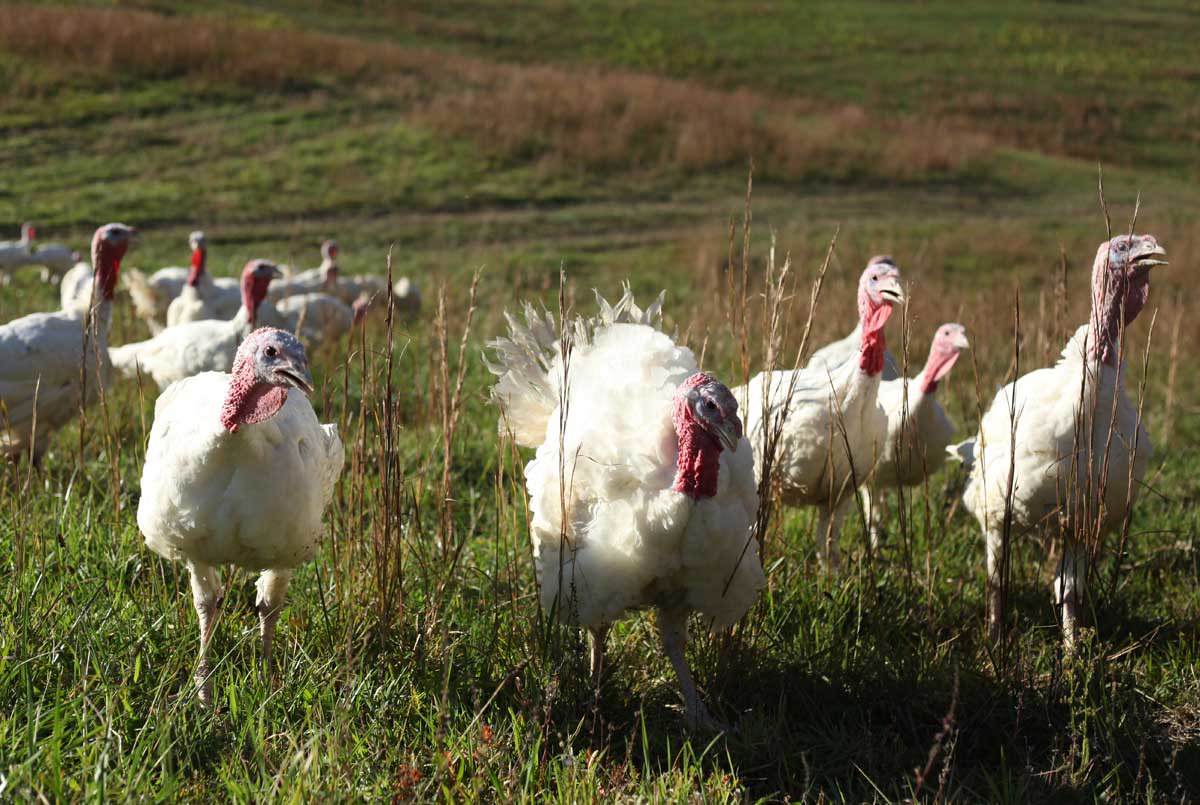 “A little over a year ago we posted an ad on Craigslist saying we wanted land to farm,” says Charles. “We answered the first response and, when we came out and looked at the place, we fell in love.”

For him, nabbing this perfect plot of land marked the culmination of a life-long transition from full-blown factory-farmer to owning his own grass-roots operation.

The twist? Charles Long was raised by the son of Jim Long, founder of Virginia’s first – and eventually most major – mass-commercialized turkey operation. After raising turkeys free-range for years – on various plots of land he owned and leased in the Meadowview area – Jim realized that he could outfox Old Man Winter and predators via constructing heated houses. In 1942 Jim Long began raising his birds indoors.

“My grandfather was a true pioneer,” says Charles. “He was one of the first farmers to start raising birds inside.”

By the early 1960s, Jim was so successful he’d incorporated his turkey farming business under the name Franwood Farms, and, with the savvy of a corner-office entrepreneur, purchased subsidiary companies – like a truck dealership to cut Franwood’s transportation costs, a construction company to help lessen the expense of its expansion, a butchery to process the meat, and a packing plant to, well, pack it – thereby controlling economic gaps other farmers accepted as simply the “cost of doing business.” Franwood grew swiftly, supplying poultry to major metropolitan hubs – like Washington, D.C., Boston, and New York City – throughout the eastern seaboard.

As the scion of what was at once a family farm and corporate agricultural powerhouse, Charles Long spent his youth and early career immersed in the culture of big agro-business. Then, two years ago, in 2013, he decided to make a change.

“I wasn’t happy doing what I was doing,” says Charles. “I felt detached from the natural world.”

By watching the ongoing success of the slow-foods movement – as embodied on the front-end by Joel Salatin, or expressed on the back by Barbara Kingsolver’s best-selling farm-memoir, Animal, Vegetable, Miracle – Charles was inspired to apply his own expertise to sustainable farming. 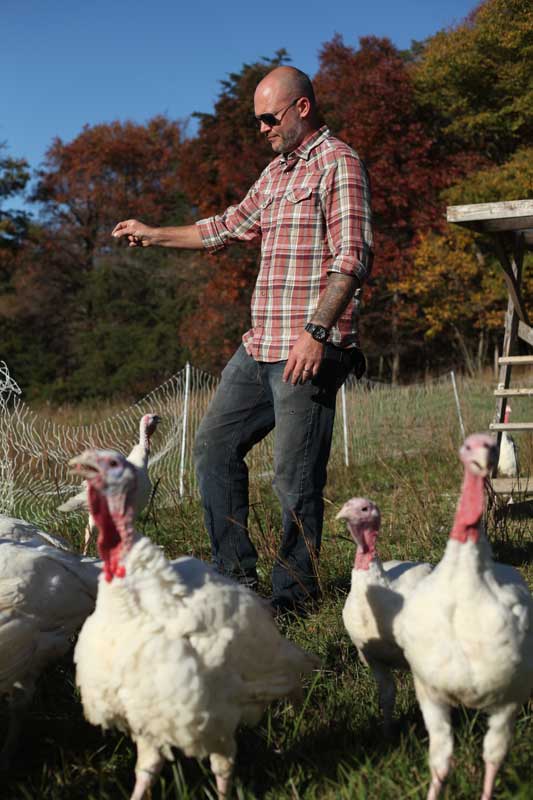 The shift was huge. With Long Roots, Charles committed to a policy of naturalness. Whether it be turkeys, chickens, ducks, sheep, cows, or Lucy, the sheep-herding donkey, all the Long Roots animals are raised without antibiotics, are predominantly grass-fed (locally sourced, non-GMO feed is supplemented), and completely free-range.

“We fence in the small animals at night to keep out coyotes and predators,” says Charles. “And we don’t clip the wings of our birds.”

“I think it’s a happier method of farming. I know I feel happier, and I think the animals are happier too.”

When Charles opens the gate of a solar-powered electric enclosure housing around 50 soon-to-be-Thanksgiving turkeys, this last point is quickly proven. The maturing birds disperse in a flock, go pecking and strutting about the pasture, stretching their wings and taking brief flights. Contrary to what you’d think, they don’t flee or wander too far. In fact, within minutes they’re back at the enclosure, gathered about the Longs, curiously cocking their heads.

“I think it’s a happier method of farming,” says Charles. “I know I feel happier, and I think the animals are happier too.”

For the time being, while he grows Long Roots’ various herds and customer base, Charles is still working for Franwood. At present, these time constraints are limiting, but in the next year or two, Anna and Charles plan to commit to running Long Roots full-time.

“For an operation as new as we are, I think we’re pretty successful,” says Charles. “[The farm] is paying for itself right now… [and] going full-time would push it over the hump, because we would have more time to take everything to the next level.”

At present, Long Roots sells only through their website, word of mouth, and through ads posted on Craigslist. With additional time devoted to the operation, the Longs would be able to cultivate relationships with local markets, set up booths at farmers markets, and look to contract with local and regional restaurants. However, while it all sounds easy, there have been, and remain, some substantial hurdles. 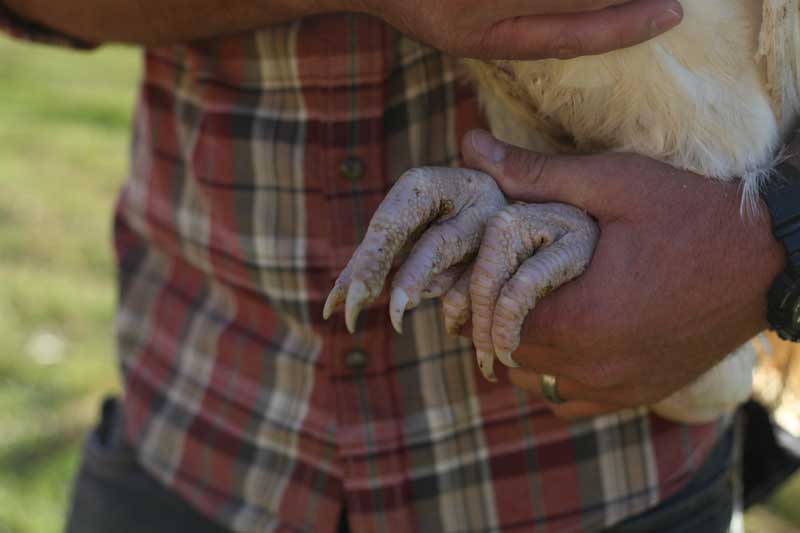 Charles Long holds one of his free-range turkeys at Long Roots Farm. 621 Studios

“So far the biggest challenge has been taking the ‘next step,’” says Charles. “Each addition to the farm has been a big decision for us. One, because you want it to be successful. And two, because it’s a financial strain with such small margins when you first start up. It’s just like any other business when you start; you literally put your all into it.”

Charles identifies “marketing and meeting new customers” as the two most challenging aspects he faces when shifting to full-time. “We need to put ourselves out there more and meet more customers,” he says. “We’ll have to find a platform that fits us just right.”

In other words, to fully make the leap-of-faith from mass to small-scale, Long Roots will have to increase its local and regional brand presence, ensuring that would-be customers – the kind of people who care about the slow-food movement and are willing to pay higher prices for the higher quality meats – know who they are and what they’re all about.

“We’re not looking to get huge,” explains Charles. “But we would like to be totally focused on Long Roots, and have the farm support us and eventually maybe a few other helping hands.”

And while the prospects of all this are surely exciting, Charles says that once he makes the move, there’s a lot he’ll miss about working at Franwood.

“I really enjoy working with my family,” he says. “It’s definitely trying at times figuring out relationships and work at the same time, but it’s rewarding to accomplish something with family. I’ll miss that.”

When asked what his grandfather, Jim Long, thinks of all this, Charles tells the story of the 95-year-old’s visit to the Long Roots.

“He was amazed we were doing things the way he’d done them back in the ’40s,” says Charles. “He said he was glad there was a market for what we were doing and encouraged us to grow our operation. Get bigger, he told us. And that’s exactly what we intend to do.”