Meet a Texas grass farmer with 600 head of cattle. 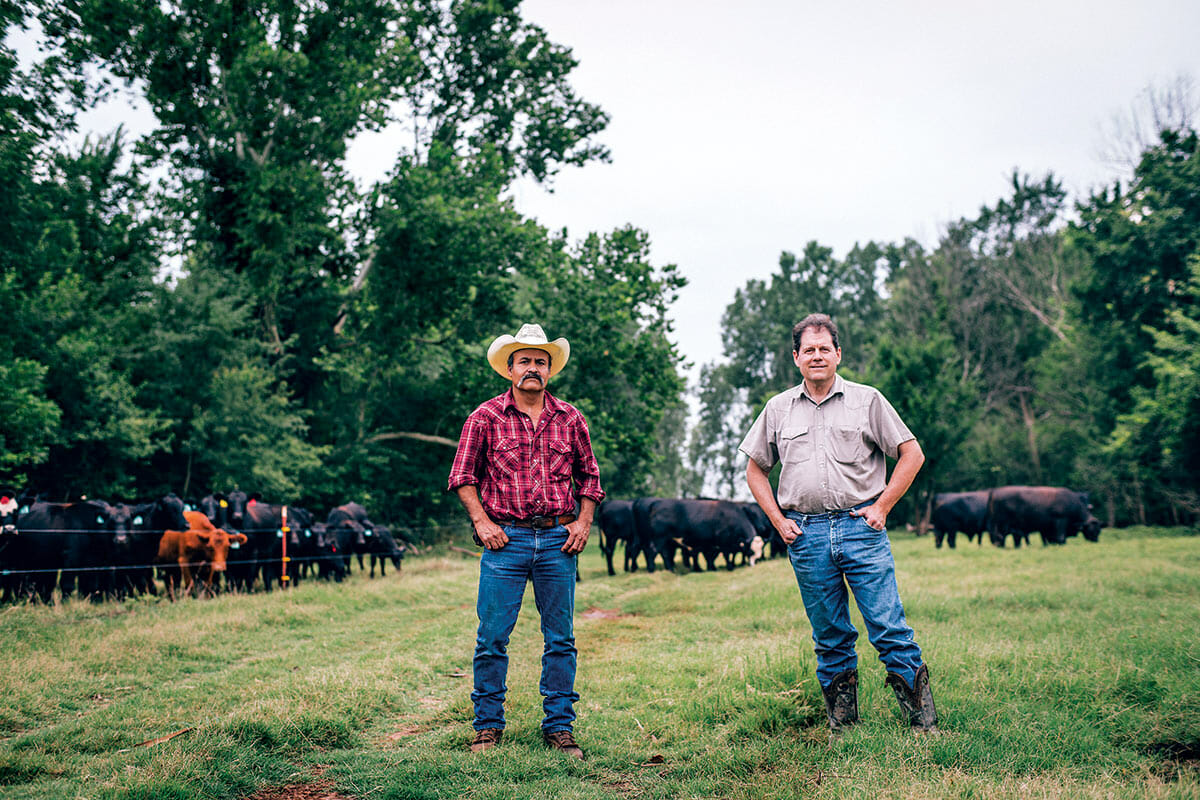 After choosing cattle as the “vehicle to harvest the sunshine,” Munson now has his sights on a larger project: changing what consumers expect from grass-fed beef. “A ribeye shouldn’t be a little six-ounce piece of gristle,” he says.

Three decades ago his family purchased a grain farm with fertile alluvial soil along the Red River just north of Detroit, Texas. They tried in vain to make a profit as grain farmers, then, in the late 90s, Munson took sole control of the land. He now has his cattle foraging on clover, sudangrass and millet on his 4M Ranch. He’s testing a plot of gamagrass as well.

These names might not be familiar to beef eaters, but it doesn’t take long for the cattle to peruse the menu. “Cattle will pick out the most nutritious feed and eat it first,” explains Munson. On many farms this means Bermuda grass, which accounts for the biggest consumer gripe with grass-fed beef, that it lacks marbling in the meat (thanks to skinnier cows).

After choosing cattle as the ‘vehicle to harvest the sunshine,’ Munson now has his sights on a larger project: changing what consumers expect from grass-fed beef.

That’s not a problem with beef from the 4M Ranch. Munson is convinced that the gristle comes from cattle that are feisty or excitable, and the negative ways in which they interact with other cattle. “We’re really working hard on disposition and quality,” he says. In his breeding program, behavior is on the same level of importance as weight gain. The fact that he even has a breeding program in the grass-fed market is a step in the right direction for quality. “The average herd in Texas is 10 head. Most of those people that have 10 head have horrible genetics.” He attributes the blasé attitude towards grass-fed beef to this lack of attention in raising quality cattle. The assumption for too long has been that simply eating grass-fed beef’is more responsible; thus the market now relies predominantly on a tenuous footing of moral superiority.

Munson is also concerned with our reliance ‘on a vulnerable cross-country food supply infrastructure that responds poorly to unexpected interruptions. “I encourage people to have durable systems in place in case things go wrong instead of just saying, ‘I’m gonna stock up some freeze-dried food and bullets.’ That’s just a short-term solution.” Munson sees his ranch as a step toward creating a more locally focused food supply.

But first and foremost, this rancher believes that his beef should taste delicious. “You don’t want to be in the same category as high-fiber cereal,” Munson says.

Popular
How to Design a Moon GardenLindsay Campbell
How to (Actually) Get Rid of Fruit FliesEmily Baron Cadloff
7 Smokable Plants You Can Grow That Aren’t MarijuanaBrian Barth
6 Differences Between Llamas and AlpacasAndrew Amelinckx
Goat Sex: Everything You Wanted to Know But Were Afraid to AskAndrew Amelinckx
Explore Modern Farmer
Related
Million Gardens Movement
America’s Oldest Continuously Operating Victory GardenFrank Giustra
Plants
Tar Spot Disease Is Plaguing Corn Fields Across the MidwestLindsay Campbell
Environment
Is Virginia’s Beekeeping Lottery a Good Idea?Bridget Reed Morawski
Animals
How Can Farmers Coexist With Wolves?Dan Nosowitz
wpDiscuz
We use cookies on our website to give you the most relevant experience by remembering your preferences and repeat visits. By clicking “Accept”, you consent to the use of ALL the cookies.
Cookie settings ACCEPT
Privacy & Cookies Policy