Born a nomadic farmer in Laos, Koa Lee now grows flowers and vegetables on a 2-acre farm in Washington. 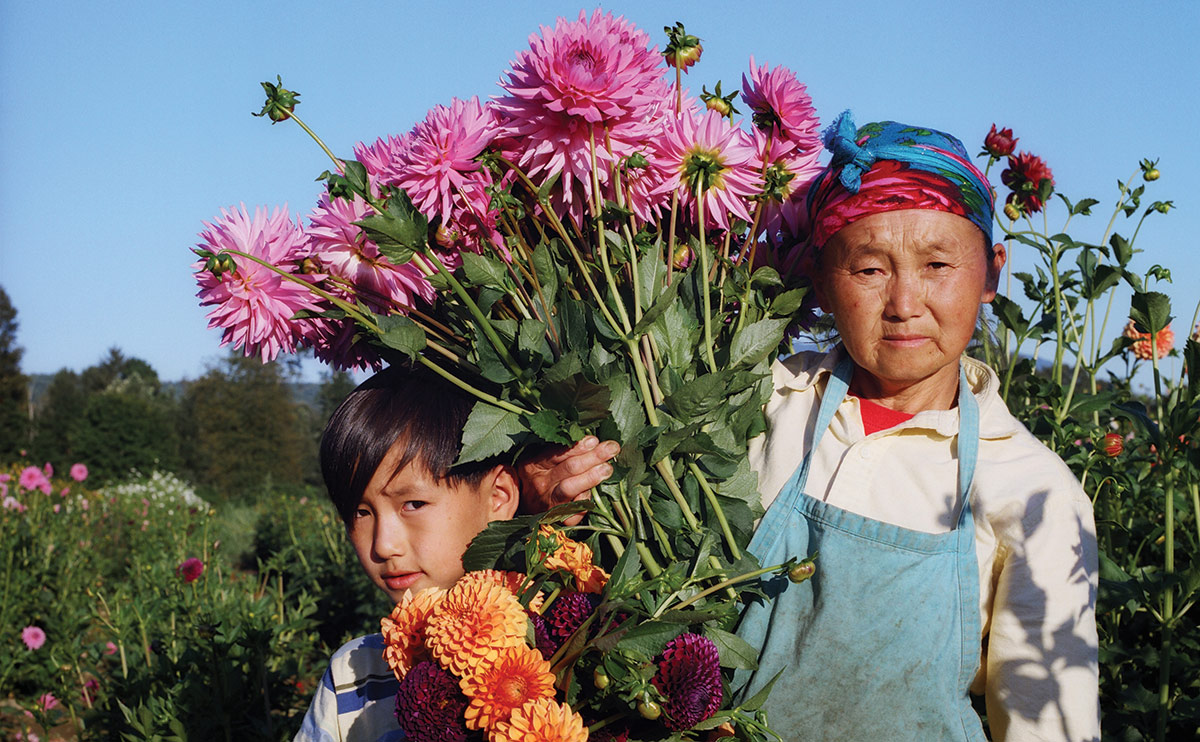 She immigrated to the United States in January of 1989 and is now the proprietor of a 2-acre farm in Fall City, Washington. Lee works the land with her cousin and cousin’s husband.

Half her farm is dedicated to growing vegetables – everything from golden beets and Russian kale to summer squash and Chinese spinach – while the other half is dedicated to growing flowers for local markets. She sells at farmers markets around the Seattle area, such as Pike Place Market, the Fremont Sunday Market and the Redmond Saturday Market on the other side of Lake Washington.

‘I never used any chemicals or pesticides.’

Lee was also one of the first Hmong women to get organic certification in Washington state. “It wasn’t hard,” she says. “Where I first started working in the United States, I never used any chemicals or pesticides.”

In addition to her cousins, Lee has a large family. Very large, in fact: When asked how many grandchildren she has, Lee pauses. “Probably… like 10?” she laughs. “Maybe 20?” But even though she’s been farming for four decades, she’s still not ready to retire. She doesn’t even play favorites with the variety of job tasks. “I like all of it,” she says. “It’s what I’ve done all my life.”

Popular
7 Smokable Plants You Can Grow That Aren’t MarijuanaBrian Barth
Agricultural Runoff Pollutes Well Water, a ‘Public Health Crisis In the Making’Madison McVan, Investigate Midwest
Move Over, Mezcal. A Sustainable Tequila Alternative Is Taking Over.Hollie Stephens
The Fertilizer Shortage Will Persist in 2023Shea Swenson
Why Don’t We Eat Turkey Eggs?Dan Nosowitz
Explore Modern Farmer
Related
Features, Food Security, Labor
The Rise of Virtual Farmers MarketsLeah Borts-Kuperman
Environment, Labor, Water
California Farms and Farmworkers Attempt to Recover From Record FloodsNaoki Nitta
Books, How-To, Lifestyle
How to Turn Your Garden Into a Business, No Matter the SizeEmily Baron Cadloff
MTMF, Plants
This Modern Farmer Wants You to Grow a New Potato StrainBevin Cohen
wpDiscuz
We use cookies on our website to give you the most relevant experience by remembering your preferences and repeat visits. By clicking “Accept”, you consent to the use of ALL the cookies.
Cookie settings ACCEPT
Privacy & Cookies Policy