Listening In On Solitary Bees

A team of artists are creating a new way to learn about bees. 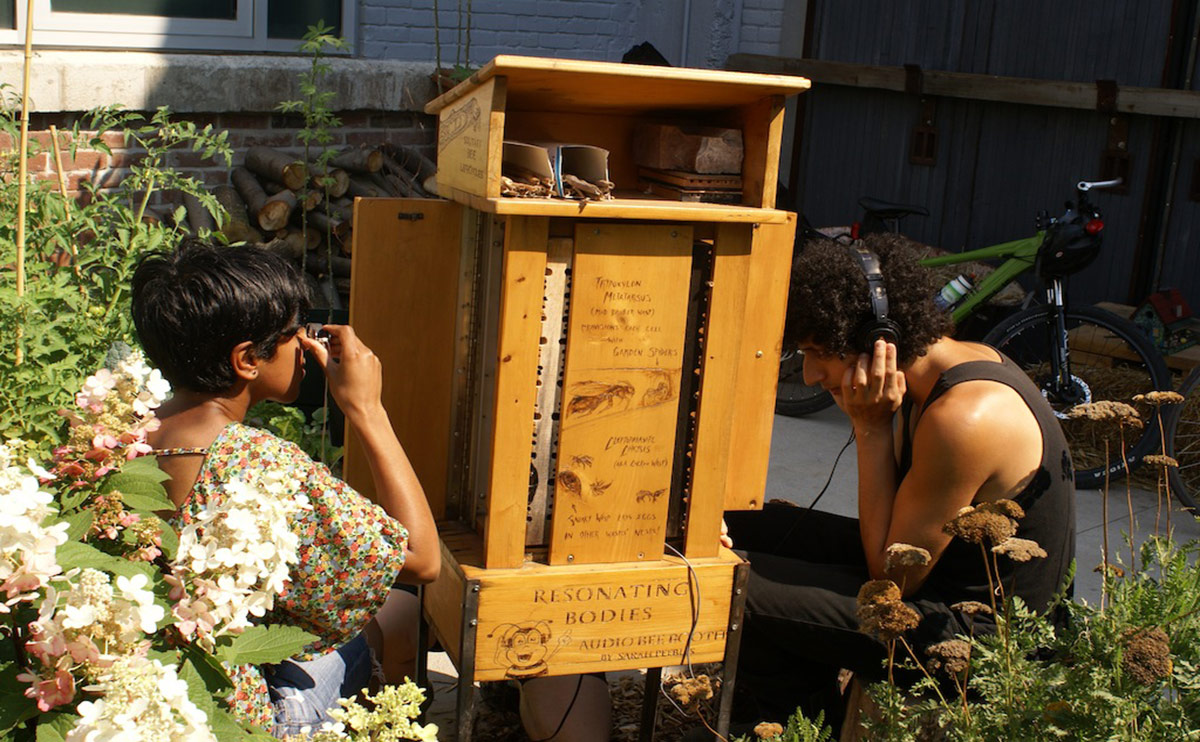 That’s the question a team of Canadian artists, woodworkers and biologists set out to answer in 2010 when they constructed their first audio bee booth. The original prototype, which first appeared in the educational branch of the Toronto Zoo, was designed to give visitors a chance to look at – and listen in – on the lives of solitary bees and wasps; insects that are integral, yet often over-looked, pollinators.

Solitary bees and wasps do not live in colonies and they do not produce honey; instead they lead independent lives holed up in vacant beetle bores or nestled into twiggy bramble. With over 20,000 different species worldwide, and nearly 5,000 native to North America alone, solitary bees, or The Other Bees, make up the vast majority of all bee species, contrary to the common misconception that most bees we hear buzzing around are the common European honeybee.

This misconception is one thing the booth may help debunk. Since the initial prototype, the team has built six one-off bee booths, and placed them in various parks, zoos and wilderness areas around Ontario and Alberta.

Sarah Peebles, a Toronto-based sound and installation artist who works with the project, says the booths are not about saving the bees; they’re about biodiversity.

The booths are not about saving the bees; they’re about biodiversity.

“In my work with the project I’ve always been focused on telling stories of bee biodiversity, and pollination ecology. Of course it’s hard to tell a complete story with a piece of art, but what I want to do is provide a window for people to experience ecology through, and maybe it will become a springboard for them want to learn more.”

Peebles says the aural experience the booth provides is key in creating a more engrossing experience.

“Just looking at the bees as they move around in the tunnels is exciting, but when you add another sensory experience it allows you to grasp what you’re looking at more deeply,” she says. “Hearing their legs move the leaves around, or their wings beating against the air, it’s like listening to music in stereo versus mono, it takes you there.”

Through works of art like audio bee booths, Peebles, and artists like her, hope to use their creativity and passion to educate people on the importance of pollinator biodiversity. To find out more about their projects check out Resonating Bodies for more information.