Debunking the Geep: How Many Sheep-Goat Hybrids Are Real?

Remember the Irish farmer with a rare sheep-goat hybrid, or geep? Maybe it wasn't a geep at all. 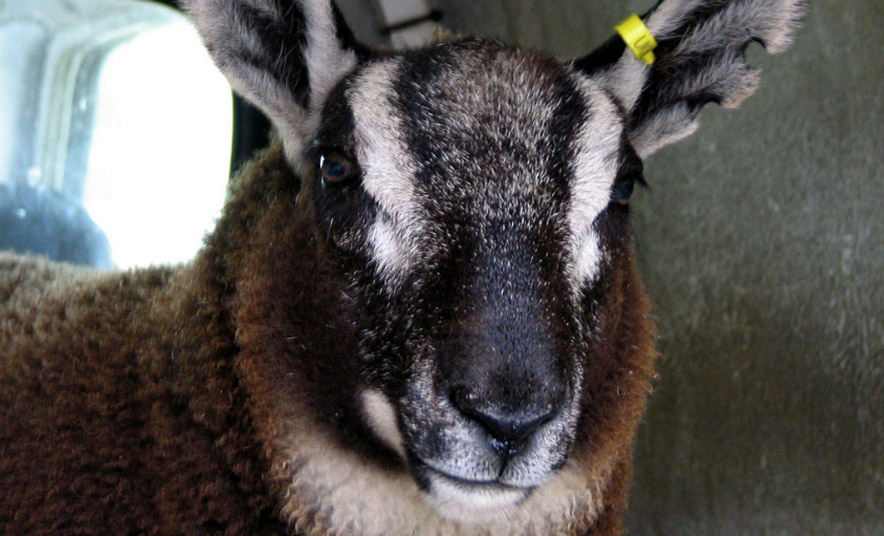 It’s rare for a sheep and goat to mate successfully, and most resulting pregnancies are never carried to term. According to Gary Anderson, distinguished professor emeritus at UC Davis, these hybrids are exceedingly uncommon between a male goat and a female sheep (as was the case with Murphy’s geep). Anderson, who spent much of his career studying sheep-goat hybrids and chimeras, is suspicious of most alleged geeps.

“There are lots of anecdotes floating around about these hybrids,” he says, “but there are very few legitimate documented cases.” 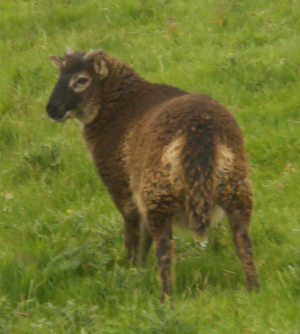 These rural yarns often bear similar trappings — it starts when a baby sheep or goat is born that doesn’t look quite right. Murphy’s geep, born to a sheep mother, has long, spindly legs and a set of goat-like horns. “I’m not sure whether … that ‘geep’ was just a funny looking sheep,” says Dr. Jill Maddox, an Australian scientist who has performed extensive research on the sheep genome.

Often these births come from a situation where there were no available male goats or sheep to mate with their own kind. Like a well-worn urban legend, Anderson says randy roaming billy goats or rams are often blamed. In Murphy’s case, he suspects a mountain goat.

“The goat that took advantage of our ewe was wild, livin’ in the mountains,” he says, speaking to Modern Farmer from his bar Paddy Murphy’s.

Murphy’s geep made international headlines but a smattering of other alleged geep births have also been announced this year. On April 14, a geep was reported at Ticonderoga Farms in Chantilly, Virginia. Also in April, a geep was reported in Zollernalbkreis, Germany. And in Lyle, Minnesota, farmer Sherry Andow claims three recent geep births.

Andow says she hasn’t owned a billy goat for nearly two years, so it was shocking when two of her lady goats got pregnant. One had a black baby named Gloria and the other had pure-white twins. Andow noticed peculiarities with these babies — wool-like fur and a high libido with the male twin (anecdotally, this is an oft-observed trait in geeps).

There’s a dearth of goat fathers for Andow’s geeps — her nearest farmer neighbor is over 10 miles away, and wild goats don’t reside in her area. There are, however, rams on her farm. Andow can’t come up with any other way her lady goats got pregnant. “We haven’t had billy goats here for years,” she says. “It’s not possible that goats can hold on to sperm for months like ducks, is it?” (Ed. Note: It is not possible.)

In a case like Andow’s, it’s hard to provide an alternate theory for the ewes’ pregnancy — other than perhaps immaculate conception. Even Anderson can’t come up with a viable, non-geep explanation. “I’d be more inclined to believe a case like this,” he says. “At least when it’s a female goat and a male sheep, the offspring is more likely to survive.” 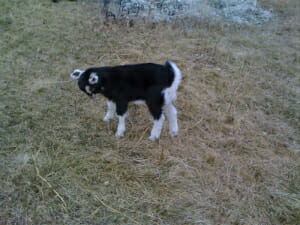 Gloria, one of Andow’s geeps.

Still, Anderson says that without genetic testing, he maintains a skeptic’s stance. Before his retirement, his teams would get two or three calls a year from farmers who claimed they had geep. “They were always very enthusiastic,” he says. “But when it came time to actually go do a test, something would get in the way, like the farmer was too busy or their hybrid died the night before and they were too heartbroken to take (genetic) samples.”

Murphy intends to have geneticists from University College in Dublin come test his geep, but hasn’t gotten around to it yet. Certainly if the tests come up negative, it would be something of a disappointment. Murphy’s business has been booming — he got so many curiosity seekers that he moved the geep down to his pub for easy observation. “We’ve gotten hundreds of visitors, coming all the way out here to see the geep. Most times, they’ll stick around for a beer,” he laughs.

Andow hadn’t even considered that her geep could be valuable. When she heard that Murphy has fielded purchase offers, she asked this reporter, “If you run across anybody who wants to buy one, can you let me know?” First, she should probably make sure her geeps are real.

Top Photo credit: Cherry Walsh, photo of an alleged geep born on the isle of Islay in 2005.

I have 2 baby keeps. A male and a Female. They are 2 weeks old. Their father was a dwarf goat and the mother a sheep.

I have 7 baby beeps. They are all 2 weeks old.
All mothers are Ewes and the father is a bore kiko mix

How would one go about getting the chromosomes tested to find out if they truly have a sheep/goat (shoat) hybrid? I have a baby that was born from my Nigerian Dwarf doe and has short rounded ears instead of the long narrow ones. He also has a different shaped head and fur than any of my other kids. I’m very curious if my ram could actually be the father. I know he bred with my does as we saw it happen. We had two goats that had miscarriages and 3 others had stillborn kids before this one was born. I… Read more »

We have a family of wild geeps that live in the woods & fields around our home. The Parents are a goat and (I think) a Cameroon sheep. They’ve successfully had two kids over two years, and one of those this spring has had healthy twins. All offspring look more Cameroon sheep than goat. Over the last few years both parents have grown sizeable horns. We constantly get people stopping and telling us our goats have escaped and we have to show them that ours are happily in their own paddock and the others are wildly free to roam as… Read more »

There have been verified cases through genetic testing, apparently

My goat went after my female sheep. Is it possible that she could be pregnant?

Come on over to test, our goat adds new meaning to “dirty old goat” the offspring from the katahdin sheep has horn buds and looks a lot like the nubian buck

We just had a stillborn geep. No other explanation. The gestation is between 91-96 days. We do not own a buck, only 2 dairy does, and a flock of Babydoll Sheep. We don’t live where there are any wild animals, that would be breeding our goats. The geep has the gopher ears, but the long sheep tail.

I had a Nigrian dawrf buck and he bred one of my dorper ewes. She had a Male geep which died around 3 mths.I had a breeding again and had a pure white female geep and she just had a female geep
Feb 2019

I have a Geep, born today