A Closer Look at Leeks

Getting to know the tall, slender and often-overlooked allium known as the leek. 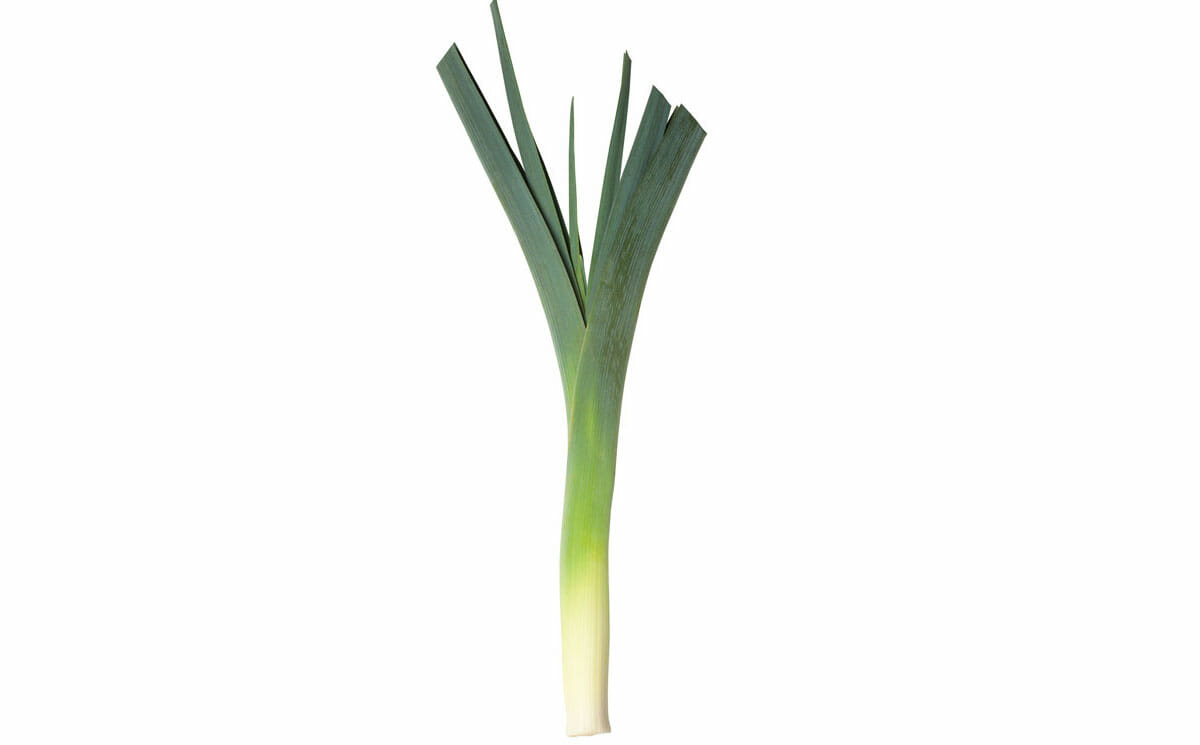 Not the leek. This tall, slender and often-overlooked allium is quiet. Subtle, even.

With ivory-white lower halves and green tops, leeks are lookers. The cultivated cousin to the wild ramp, a leek resembles a grown-up scallion, but with a sweeter, more complex flavor. The French have long appreciated leeks: in classic soups (think vichyssoise, or leek and potato) and salads (leek vinaigrette) and as a sweet base for stews, braises and gratins. Lately, American chefs have been using them in everything from savory tarts and bread puddings to toppings for ramen, sushi and pizza.

Leeks arrived in North America with the early colonists, says ethnobotanist John Forti. “In the old herbals and books of husbandry-slash-housewifery brought here by the first generations of immigrants in the 17th century, they recommend planting leeks like a palisade or border around your garden to help keep the critters out.”

Forti, the curator of the historic gardens at Strawbery Banke in Portsmouth, New Hampshire, says: “The gardener would plant leeks so that they fanned into one another and formed a tight border.”

Leeks are traditionally planted in early spring, by directly sowing seeds or using small sets (seeds that have germinated). The only trick to growing leeks is that you need to regularly mound the earth around them as they mature, keeping the root hidden from the sun and protected by the soil – a technique called blanching. This gives the delicate bottom half of the leek (called the shank) its pure-white color. The tougher green upper half has a stronger flavor, but is still edible (excellent in stocks and soups) and need not be buried.

Leeks prefer soil with plenty of compost and nitrogen and do best planted in trenches about 6 inches deep. They like a good amount of water while the seeds or sets are taking root. (Thirsty leeks tend to grow unevenly and have a pithy, unpleasant texture.)

Thin your rows of leeks in the early summer, removing tiny, slender leeks to give each plant at least 3 inches of space. Chop these small specimens finely and add them raw to salads or dressings, or use them as the base of a sauce instead of garlic or onion. In late summer, harvest leeks as you need them. If the earth is moist, you can carefully pull them up with your hands. But you’ll likely need a spading fork to loosen the soil before slowly pulling leeks up by the base.

Leeks are resistant to cold and frost. They are one of the last plants in the garden; I’ve pulled some up on Thanksgiving Day to use in holiday stuffing. Thorough cleaning is important, also. Because you’ve been mounding soil around the base, you’ll find dirt caught in the layers. Cut the leek down the middle, then rinse it under cold running water.

Once leeks are clean, slice the white section and very slowly sauté in olive oil. Add young potatoes along with chives and thyme and finally some stock. One swirl in the blender and you’ve got a beautiful soup to celebrate spring.

Move over, ramps. Your cultivated, quiet cousin is ready for her close-up.

Leek and Potato Soup With a Spring Chive Puree

When days get warm, this soup can be served chilled. It will keep for several days in the refrigerator or can be frozen for up to 4 months.

In a large pot, heat the oil over low heat. Add the leeks and cook, stirring, for 12 minutes. You don’t want the leeks to brown, but to be tender and soft. Add the thyme and chives, salt and pepper and stir. Add the potatoes and stir; cook for 3 minutes.

Raise the heat to high and add the broth. Bring to a boil; reduce the heat to low and partially cover. Cook for about 15 to 20 minutes, or until the potatoes are tender.

Using a food processor or blender, puree the soup. Add cream as desired.

Place soup back into the pot and taste for seasoning. Add more salt, pepper, thyme or chives as needed. Keep the soup warm on low heat. Serve hot with a drizzle of the chive puree. Serves 6.

Place 3/4 cup of chopped fresh chives and 3/4 cup of olive oil in a food processor or blender and puree. Season with salt and pepper. Keep refrigerated. Bring to room temperature before drizzling into soup. Makes 1 cup.