Sheep: The Once and Future Kings of Golf Course Design 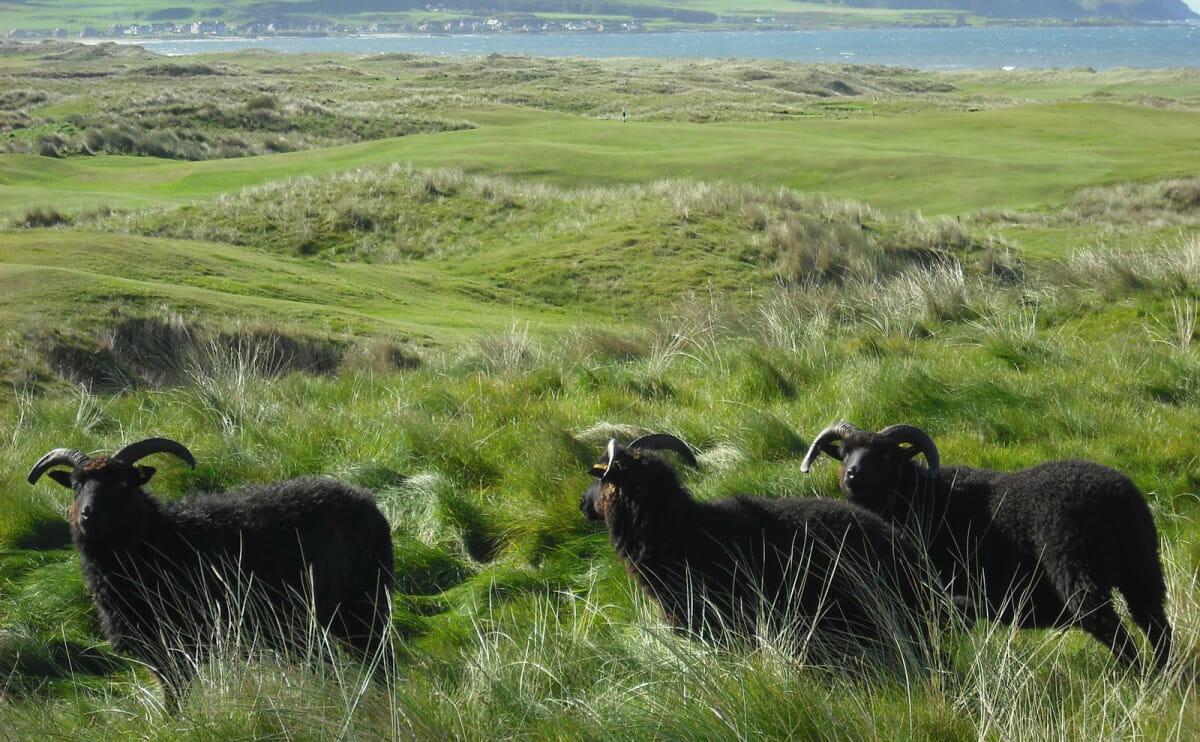 At least that’s the experience of golf course architect David McLay Kidd. Decades ago, back when he was learning the game at Machrihanish Golf Club on the Western Coast of Scotland, he could almost always find an errant shot. “If you hit it straight you could play a nice tight line,” he recalls, “but if you could hit in the rough you could find it there as well because the the rough was thin and wispy.”

That’s because sheep were grazing on the grass off the fairway. The course kept the animals off the greens with an electrified wire, but otherwise they were free to eat the course in the winter months.

So 30 years later, when Kidd got his dream job to design a second course at Machrihanish, he had some thoughts on the grounds crew. “I did all I could to convince the ownership to bring sheep back to the golf course,” says Kidd. And they agreed.

The choice wasn’t just born of nostalgia. The windswept dunes chosen for the site host a number of rare plant species, earning them England’s highest environmental designation as a Site of Special Scientific Interest (SSSI). Some of those plants can only survive with the help of grazing animals; others need the sheep to munch back the march of invasive species. Plus, the sheep keep the roughs mowed and the weeds off of the fairway.

There are commercial benefits, too. The 50 rare Hebridean Black sheep have a place on the course and the Machrihanish Dunes logo. Golfers also retire to the Black Sheep Pub after winding the club’s 18 difficult holes.

Even then, teaching the sheep to landscape the golf course has been a challenge. “Anyone who had any knowledge of how the sheep were managed, they were all long since dead,” says Kidd. Each winter since the course opened in 2008 has marked a studied effort into moving the sheep so they eat the right plants and leave the endangered ones.

The story goes that the bunkers at St. Andrews — Scotland’s first golf course, established in 1552 — were scabbed out areas from sheep huddling together against the North Atlantic wind. Some suspect that grazing sheep may have even mowed the fairways between the dunes of the famed ‘Old Course.’

What one might expect to be the more serious challenge — making sure the sheepies don’t get pinged with a 400-yard drive — isn’t much of a worry. On any golf course, says Kidd, only about a third of the land is regularly mowed. Sheep can stay in the far rough.

Today, it’s hard to imagine Tiger Woods waiting for sheep to cross the fairway, but modern golf courses might not even have fairways without sheep. There are few hard facts in the misty origins of golf, but the story goes that the bunkers at St. Andrews — Scotland’s first golf course, established in 1552 — were scabbed out areas from sheep huddling together against the North Atlantic wind. Some suspect that grazing sheep may have even mowed the fairways between the dunes of the famed “Old Course.”

Kidd buys the story. To keep with the low-impact goals at Machrihanish Dunes, he made use of areas cows and sheep had already beaten down.

Mach Dunes isn’t the first to honor the legacy golf shares with ewes. But other shepherding courses, like Hermitage Golf Course outside Nashville, Tennessee, use the sheep as a point of fascination rather than necessary maintenance. Kidd is the first to make sheep a living part of his design. For him, they are crucial to both the ecological and recreational success of the course.

Using sheep is a route few golf courses are likely to take in coming years. Running sheep between the tees is no small feat, involving the work of a shepherd as well as an environmentally dedicated management team. But Machrihanish Dunes is a challenging example for the American courses that together occupy more area than Rhode Island and Delaware combined. When there are so many golf courses in so many places, why aren’t more taking the leap to sheep?

“The problem with golf courses is they have the perceived persona as everything is going to look like Augusta National or a Japanese garden with waterfall and blooming flowers everywhere,” says Kidd.

That’s a lot more boring, he thinks, than listening to the long-term needs of the land which, in some cases, may require a hefty herd of 50 sheep.