Modern Native American Cuisine and the Myth of Thanksgiving

As Native Americans rediscover and refine their culinary history, a look at the original Thanksgiving myth 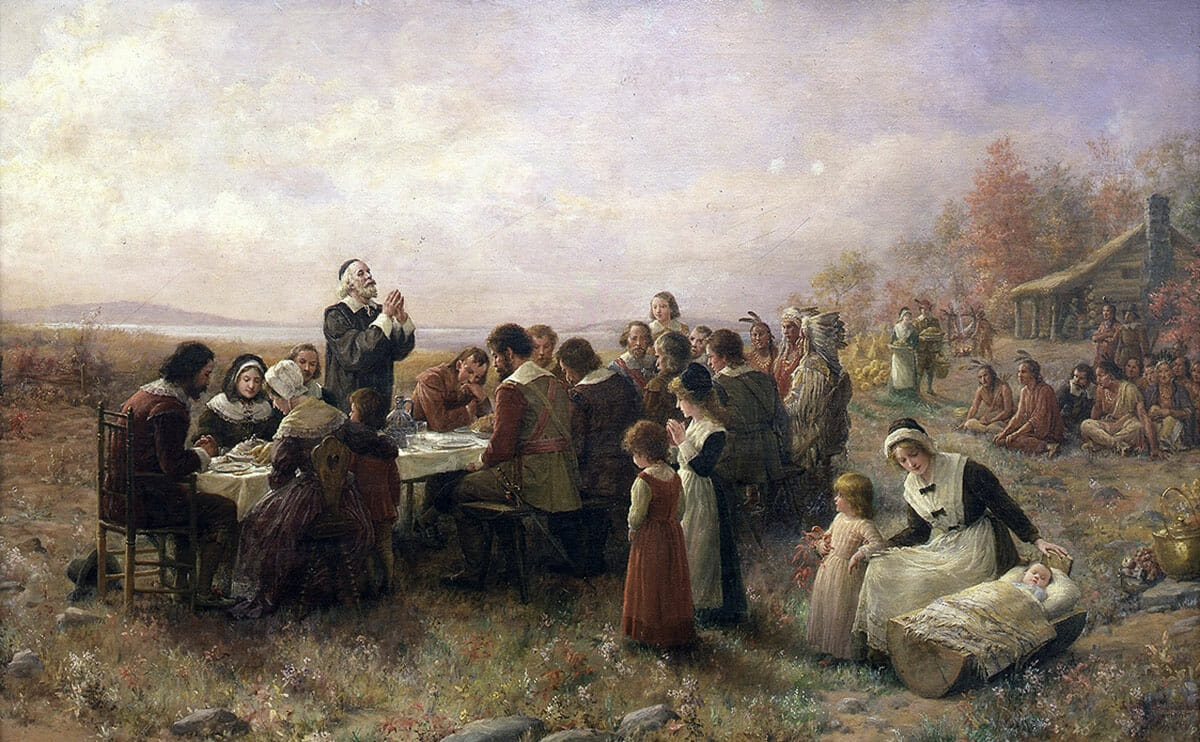 Historians have pretty much covered — and critiqued — the Thanksgiving story by now. The historical Thanksgiving is deeply at odds with the American picture-book vision of racial harmony, with pilgrims and Native Americans gorging themselves on turkey before sharing a snuggle-nap during the football game (or something like that).

The real Thanksgiving foreshadowed King Philip’s War, which has been called one of the worst racially motivated conflict in American history. Massasoit, father of Potowoma leader King Philip, joined the pilgrims for the first Thanksgiving in 1621. His son didn’t make it to another Thanksgiving until 1667, after he had led a fierce but doomed campaign that killed one-tenth of the New England colonists. Even then, only part of Philip made the celebration — British soldiers brought his severed head to Plymouth.

So if the real Thanksgiving was the prelude to a horror story, why has the racial harmony myth lasted into 2013? Here’s one theory: We want to believe that, for a brief moment, a delicious meal joined natives and pilgrims, a moment which plays into American nostalgia for a time when food could center our communities and bridge differences. But food has never been a silver bullet for American politics. Eating — and preserving culinary history — has long been a political act.

So if the real Thanksgiving was the prelude to a horror story, why has the racial harmony myth lasted into 2013?

Proof of that point can be seen in the movement to invent a modern Native American cuisine. Before opening the Corn Dance Cafe in Santa Fe, New Mexico, Lauretta Oden says she was “probably the least political person you could ever come across — just a young housewife raising kids in Oklahoma.” Drawing on her Potowami ancestry, Oden built a menu for her restaurant based on indigenous food processes and ingredients. After ten successful years, she retired to work private events and give lectures. In her words: “I keep my knives sharp and wait for the next call.”

Around Thanksgiving those calls have come from Good Morning America, The Today Show, and The New York Times, each with a different form of the same question: What is Native American cuisine?

Oden’s answer leaves plenty of room for interpretation. “It’s everything that can be grown and harvested from Greenland to Tierra del Fuego,” she says. In other words, it’s anything grown in “the New World.” Oden likes to keep the response broad because it means that she will never run out of ingredients or ideas.

Ben Jacobs, the owner of Tocabe Native American Eatery in Denver, Colorado, sees that question as an answer in itself. “That’s the best part,” he says. “What is Native American cuisine? Still using indigenous ingredients, but creating fun new dishes.” The example he loves to cite is Tocabe’s version of hummus. Instead of using Middle Eastern ingredients, Jacob and his staff used sun dried tomatoes, butternut squash, and a heirloom bean from New Mexican pueblos — all New World staples updated for modern taste buds. The ingenuity can come as a surprise to customers who expect to see what native peoples ate 150 to 200 years ago. “No one wants to see us dry meat and ground it into a pemmican,” says Jacobs. “It may be exciting in a certain sense. It’s authentic and cool, but we want to compete with other restaurants.”

This year, Tohono O’odham Community Action (TOCA), a health and food nonprofit serving the Tohono O’odham community in Arizona, started a publication to highlight the best of Native American food culture. The first issues of Native Foodways feature a primer on prickly pears, a look at the traditional Nevadan cooking methods for roasting groundhog and an extended recipe for chili from Acoma poet Simon Ortiz. Publisher Terrol Dew Johnson sees food as an opportunity for education. “We may be losing our cultures and our languages,” he says, “but if you go back to the food, a lot of it is intertwined with culture.”

But for Oden, at least, there is one sizzling exception to an otherwise all-inclusive Native American cuisine. “Get rid of that fry bread thing!” she exclaimed near the end of our conversation. “It is not traditional and not food for us!”

‘We may be losing our cultures and our languages but if you go back to the food, a lot of it is intertwined with culture.’

Fry bread may appear to be unsweetened funnel cake, but it has become a live wire in the politics of Native American cuisine. Many see the dish as lasting proof of white oppression. White flour, lard, and sugar — all you need for a rich batch of fry bread — originally came to the Navajo tribe as government rations during their 300-mile “Long Walk” from New Mexico to Arizona. Today, many intertribal powwows feature fry bread cooking contests. It’s a cause for concern for the Tohono O’odham in Arizona, where almost one-half to two-thirds of tribal members have developed Type 2 diabetes.

Still, the history of fry bread is proof of both native hardship and perseverance, which — for some — makes the food a powerful symbol for a new Native American identity. At Tocabe, almost every dish comes with a fry bread side or base. It is a choice that has earned Jacobs a number of lectures from angry customers, but he stands by it. “Fry bread brings us together and gives us a sense of somethings that’s still ours,” he says. It is a point many others have made in the Native American community, including Spokane Indian writer Sherman Alexie, whose film “Smoke Signals” includes a character who wears a “Fry Bread Power” T-shirt. “Fry bread,” Alexie has said in interviews, “is the story of our survival.”

In all our contemporary disagreements about food, it is easy to wish for a simpler time when the edible was not political. But the push for a modern Native American cuisine has not only produced a new set of delicious recipes. It’s also a reminder that food, as a marker for culture, cannot be separated from the past.