Ranchers in the vast prairies surrounding the Black Hills of South Dakota face a bleak picture after record snowstorms over the weekend. Roofs have collapsed, trees are down, and thousands are likely to be without power for weeks. Worst of all is the impact to South Dakota’s 7 billion dollar cattle industry. Some cows have […] 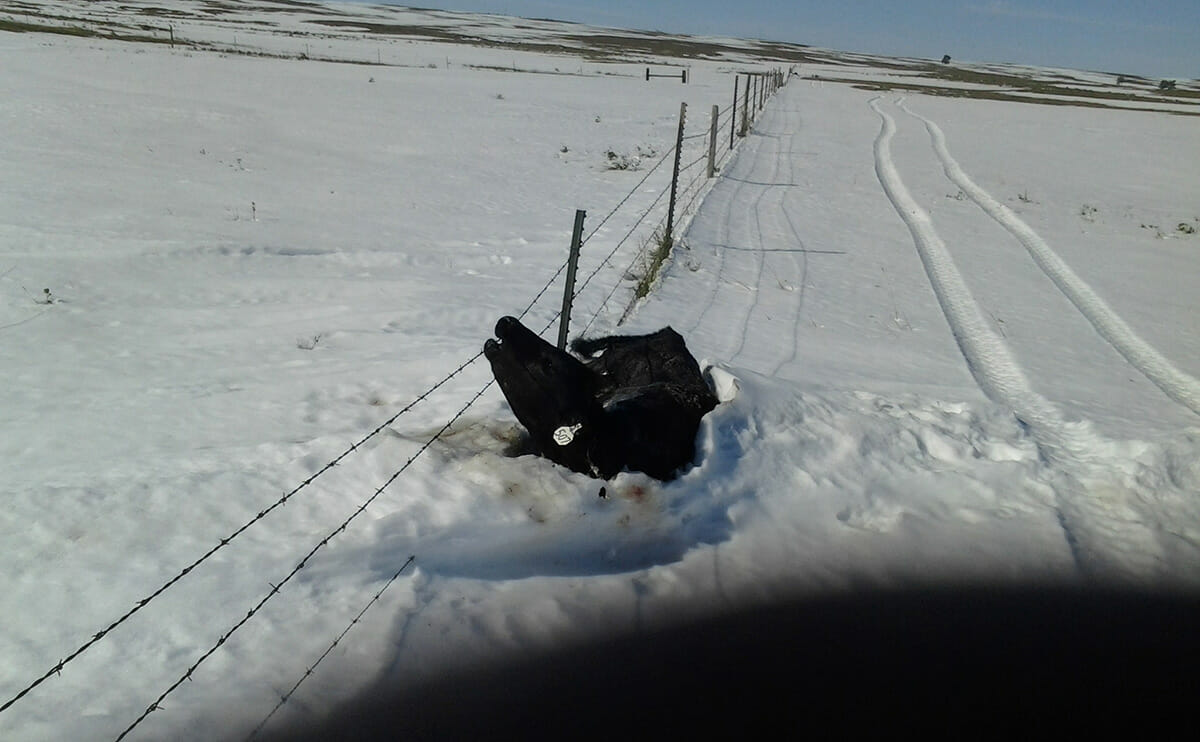 Ranchers in the vast prairies surrounding the Black Hills of South Dakota face a bleak picture after record snowstorms over the weekend. Roofs have collapsed, trees are down, and thousands are likely to be without power for weeks.

Worst of all is the impact to South Dakota’s 7 billion dollar cattle industry. Some cows have survived, drifting with gusts across the frozen landscape, but many did not. The South Dakota Stock Growers Association reports some ranches have lost more than half of their herds to the weather. Reports are coming in slowly, but the initial assessment up to 100,000 cattle dead, 5% of the state’s total herd.

“These are no words to describe the devastation and loss,” said Joan Wink of Wink Cattle Company. “Everywhere we look there are dead cattle… Nobody can remember anything like this.”

As ranchers like Wink dig out from the storm, they’ve found dead cattle huddled against fences and highway embankments, often still half buried in snow. Joan expects to find more as the weather warms this week.

“I’m not going to take photos,” said Joan. “These deaths are too gruesome. Nobody wants to see this.” 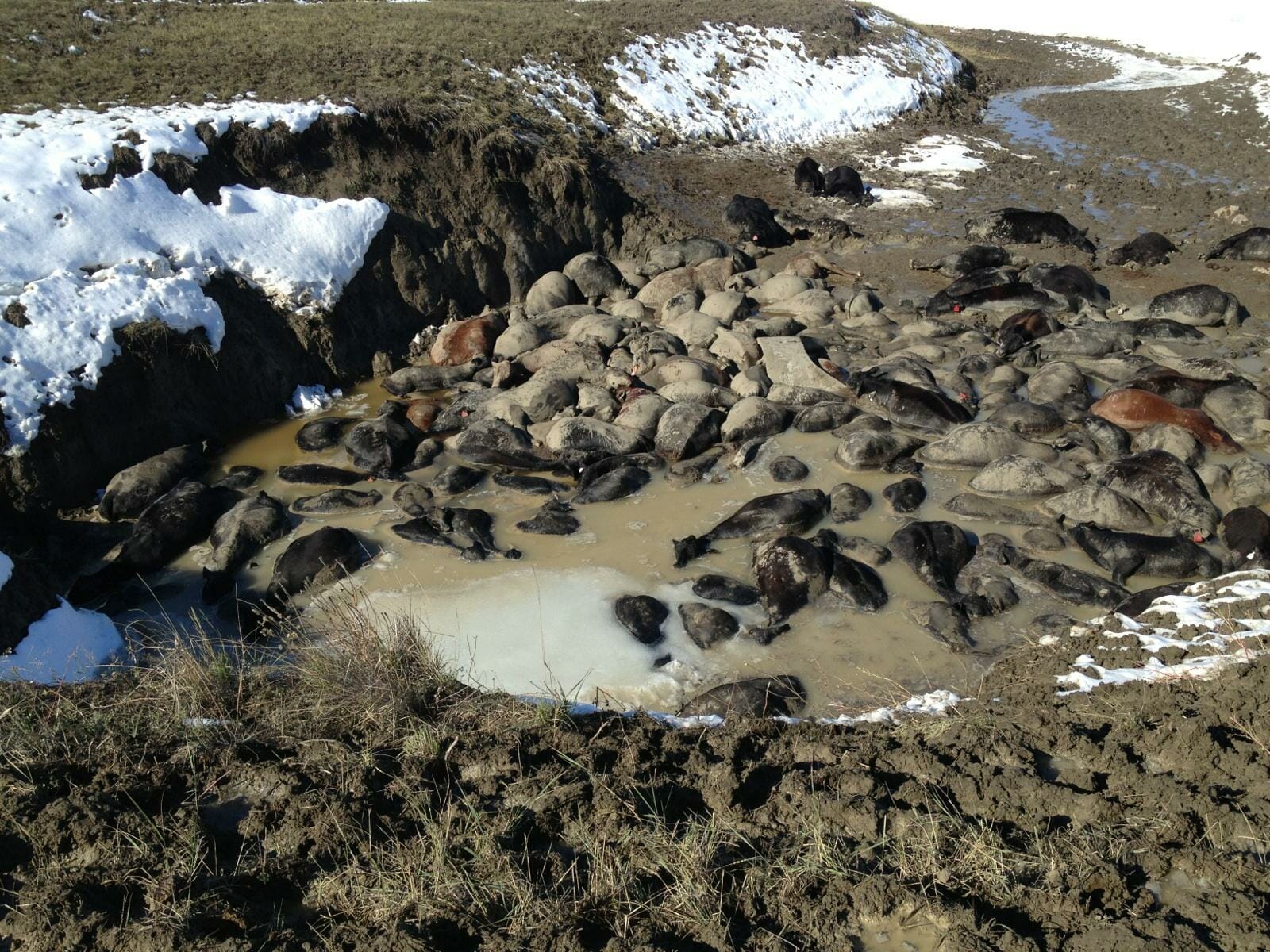 Neither South Dakota’s cattle nor its ranchers are strangers to blizzards, but the timing of this storm struck both by surprise. In early October, ranchers have yet to move the cattle to pastures protected by trees and gullies. Cattle are also waiting to grow their winter coats, compounding their vulnerability.

Earlier in the weekend, South Dakota Governor Dennis Daugarrd declared a state of emergency which allowed him to send National Guard troops to assist in the Black Hills. The next step would be to declare a natural disaster, which will pave the way for federal designation and financial assistance. That is, if the government could provide it. 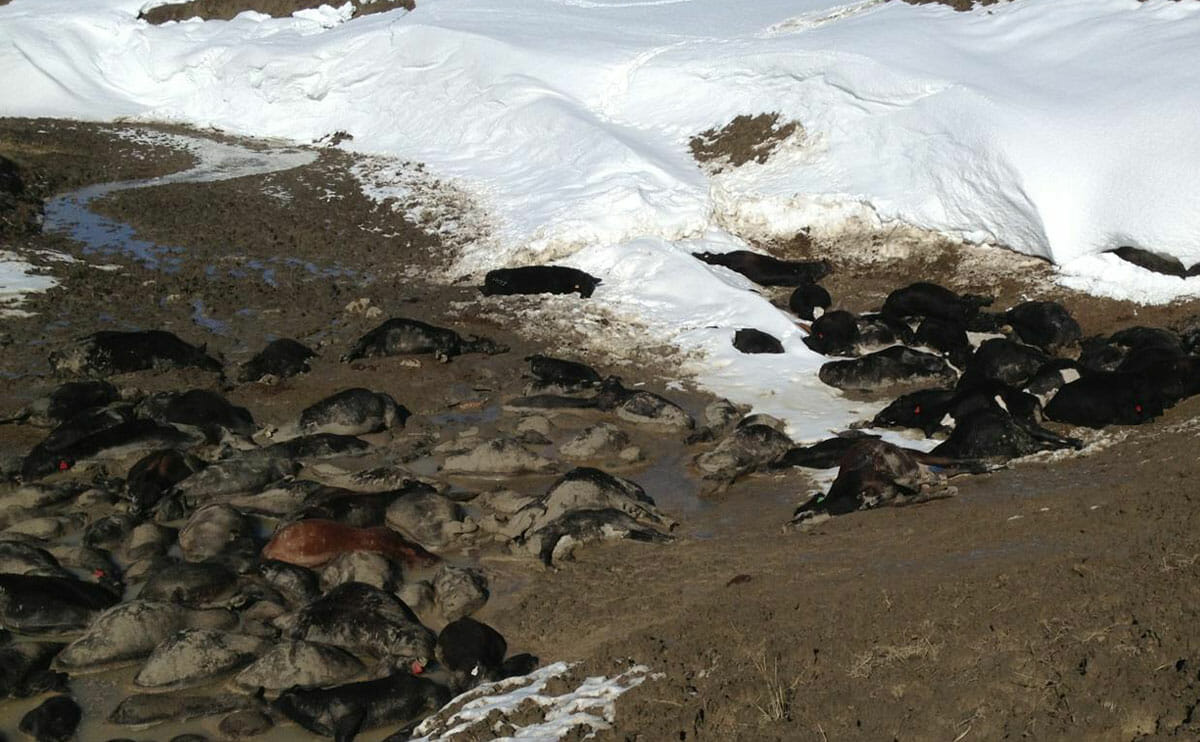 Another photo from Underwood Road.

The USDA is already short staffed thanks to the government shutdown. To get real help to South Dakota, congress would need to open the government and pass a farm bill. KBHB radio out of Western South Dakota didn’t mind telling Congress what it thought in its report on the storm: “It’s time to stop holding the taxpaying public and their needs hostage.”

The more confounding mystery is why this disaster – the cost of which will surely run into the multimillions and effect the cattle industry for years – is just now reaching national media outlets. “It’s not because of the shutdown,” said Dawn Wink, Joan’s daughter and a writer. “It’s because [South Dakota] is fly over country and it’s rural.”

A blog Dawn posted out of frustration with the media managed to generate 50,000 hits on Wednesday and over 200 messages from around the world. Dawn has compiled those messages into a long list of thoughts and prayers.

“I am sending it to ranchers that need to read it,” said Dawn.

Let’s hope more than just words are on their way to South Dakota soon.

(All photos courtesy of Dawn Wink.)

Related
Animals
Destructive Grapeleaf Skeletonizer Moth Found in NapaShea Swenson
Lifestyle, Plants
The Prison Garden Empowering Women to Pursue GrowthLia Picard
Future of Food, Plants
How More Than a Century of Antarctic Agriculture Is Helping Scientists Grow...Daniella McCahey
Plants
Goodyear Wants to Make Tires From DandelionsShea Swenson
wpDiscuz
We use cookies on our website to give you the most relevant experience by remembering your preferences and repeat visits. By clicking “Accept”, you consent to the use of ALL the cookies.
Cookie settings ACCEPT
Privacy & Cookies Policy