Master the Maize: The Increasingly Big Business of Corn Mazes

For customers, corn mazes are a lark. For farmers, they're incredibly hard work and potentially big business that has grown increasingly sophisticated. 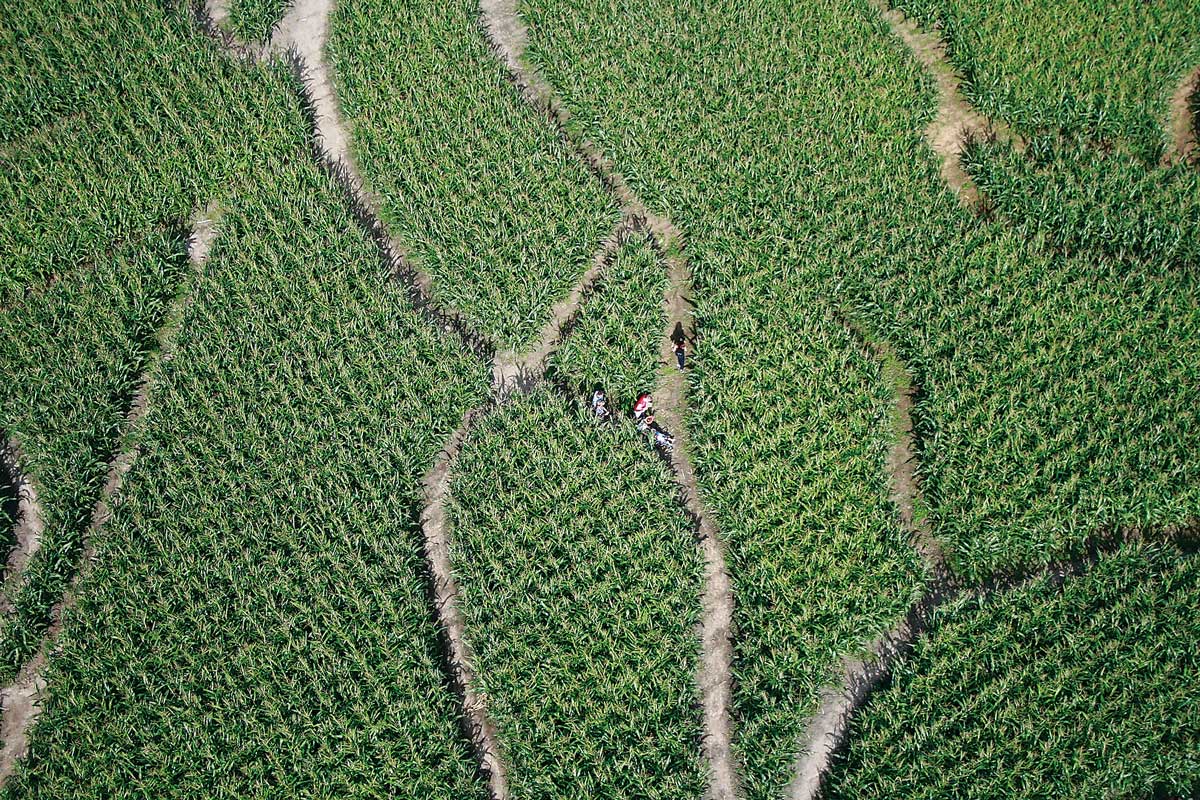 Every fall they spring up, beckoning to drivers from the roadside with hand-painted signs, big inflatable slides and the promise of a pumpkin patch or petting zoo to boot. Corn mazes tempt the young and the old; once you wade into the waving stalks, you’ll be keeping company with giggling children, gawky flocks of teenagers and adults, seriously debating the best way to exit a field of crops. For customers, corn mazes are a lark. For farmers, they’re incredibly hard work and potentially big business that has grown increasingly sophisticated.

Herbst built his first one in 1996 with the help of a few friends on leased land. Today his maze design and consulting business, The MAiZE, helps farmers create their own. For small farmers especially, it can be crucial supplemental income. Herbst says farmers can make anywhere from $5,000 to $50,000 annually. Over the years, he’s designed and built thousands of corn mazes worldwide.

In fact, corn mazes have become such a popular supplemental income option for farmers that there are now several businesses that exist solely to help farmers build and run mazes. Those who want to go it on their own can buy software to help them plan theirs. The appeal of the corn maze may be its seeming rustic simplicity, but today’s corn mazes are built using GPS technology, and boasting ever more complicated designs to attract customers.

Herbst uses a mower or rototiller to cut his designs into the corn while it’s still short. Workers have blueprints of the map and stake flags throughout the field, following the course to the flags. “It’s kind of like connecting the dots on the back of a cereal box to make a picture, but on a much larger scale,” says Herbst. A person cutting a maze solo may toil for a week; with help it could be just a day.

Herbst strongly advises farmers to lean toward the elaborate. In his day, he’s cut mazes in the shape of a brain, the American flag and the solar system (that one broke the Guinness record for largest corn maze). He’s even been hired to help design mazes in the image (and memory) of loved ones.

As with any business, not all the hurdles to be cleared are as fun as deciding to carve Johnny Cash’s face into a field of corn. That’s something Greg Hawes, of Historic Hawes Farm in Anderson, California knows well. He started running corn mazes on his farm in 2005, and is entering his ninth season. His mazes have been cut in the shapes of Scooby Doo, a battleship, and yes, Johnny Cash, to mark the year of his death.

“To come up with the money every year is the hardest thing, and that’s the same with farming,” says Hawes. “I mean it takes money to make money.” He acknowledges “it sounds crazy,” but he needs about $100,000 in start-up funds. In addition to getting crops into the ground, there’s the insurance ($7,000 to $8,000), hiring seasonal employees to take tickets and do other work and paying fees to the government.

“Oh, the health inspector comes out,” says Hawes when asked what kind of visitors he receives from the local municipality. “Every year it seems like someone I’ve never heard of comes out.”

Hawes uses Herbt’s services because he says going through a designer is simply easier than “trying to reinvent the wheel.”

Hawes runs a 7,000 acre farm that produces wheat, pumpkins, walnuts, tomatoes, watermelons and other crops. They sell them at a small market they run at the farm, but the list of additional activities they host in order to make money is vast. They’ve hosted a Renaissance Fair, a 5K run, Civil War re-enactments and an Oktoberfest. Last year they held an event called “Zombie Slayer ”“ The Ultimate Paintball Experience” in which players hunt actors dressed as zombies with paintball guns. The event was extremely popular, Hawes said.

Why would a farmer go through all the trouble of cooking up zombie hunts? At this point, the corn maze and other “agritainment” attractions pull in two thirds of the farm’s income, Hawes says, although he’s a farmer first.

“I’m still a farmer at heart,” says Hawes. “That’s still in the back of my mind, I make sure the farming happens first and foremost. I don’t want to lose that.”

Carol Beriswill, one of the operators of Beriswill Farms in Valley City, Ohio, says that any farmer who wants to start a corn maze should do their homework. She has been helping to run a corn maze on the family farm for five years now. They also hired a corn maze design company, called Corn Mazes America.

“When my brother said, ‘So are we going to plant a corn maze this year or what?’ I wish I had said, ‘Give me another year to plan it,’” she says.

Berisiell says she is still developing her marketing skills to get the word out about the maze, which attracts about 4,000 to 5,000 visitors a year at $5 to $7 a head. The maze is tricked out with QR codes so that customers can play agriculture trivia as they traverse the 5-acre, 2-mile affair. This year’s performance may determine if they run a corn maze next year.

For any farmer contemplating a maze, being a people person is key. “Obviously a farmer needs to make sure he wants to embrace people coming to his farm instead of chasing them off with a shotgun,” says Herbst.

Pleasing massive crowds and dreaming up advertisements is not an issue for Timothy Reinbott, superintendent of the University of Missouri Bradford Research and Extension Center. Every year he builds a corn maze for the university as part of his work at the research farm.

First Reinbott creates a design (“Since we’re MU we always want to have something that’s MU related, somewhere in there there’s a Truman the Tiger or an MU seal.”). Then Kent Shannon, a natural resource engineering specialist at the university, generates a set of coordinates based on the design and plugs them into a GPS device.

“He has a hand-held GPS and he says ‘follow me’ and I have a hand-held mower and I walk behind him,” says Reinbott, “And so far in ten years I’ve never run into him.”

Reinbott hosts groups of children at the university, teaching them about agriculture and then rewarding them with a trip through the maze. There have been mishaps — Reinbott once got lost in his maze with a crowd of kids. (Everyone emerged unscathed in the end.)

Building in a research environment means that Reinbott has learned a thing or two about building the perfect corn maze. His number one tip? Use long-maturing corn so the stalks stay green as long as possible. Reinbott plants 120-day corn in late June or early July to ensure his maze stays a brilliant green as long as possible. Sadly, his favorite corn seed is no longer on the market. For years he used a seed called Redi-Maize from Seedway, which was marketed specifically for building corn mazes.

“It was a beautiful corn that would turn red in the fall after it matured, and the husks were purple, and the seeds were red,” Reinbott says. “Oh, it was just gorgeous.”

(A Seedway representative said they stopped selling the seed this year because their base customer was not buying very much of the pretty crop, which didn’t have good feed value.)

Camera-ready corn and technical know-how aside, the success of a corn maze ultimately depends on the impulses that draw people back to the stalks every year. It’s perhaps not surprising that a person who has built their very livelihood on corn mazes has given some serious thought to their appeal.

“People don’t pay to walk through a cornfield,” says Herbst. “People are paying for a memorable experience. No one comes to a corn maze alone.” The maze, for Herbst, is about more than just a long, confounding walk. “You have to make all these decisions together and you know that everybody is going to be wrong at some point in time going through the maze,” he says. “That’s what relationships are built on – sharing ideas and thoughts and challenging one another.”