Photographing the Female Face of Farming

But that emotion was more complicated than simple pride. As a voiceover of Paul Harvey’s 1978 “So God Made A Farmer” speech played, image after image (taken by 10 male photographers) portrayed men muddy, men weathered, men toiling. Men in cowboy and feed hats, plaid flannel shirts hugging their work weary shoulders. Men farmers with […] 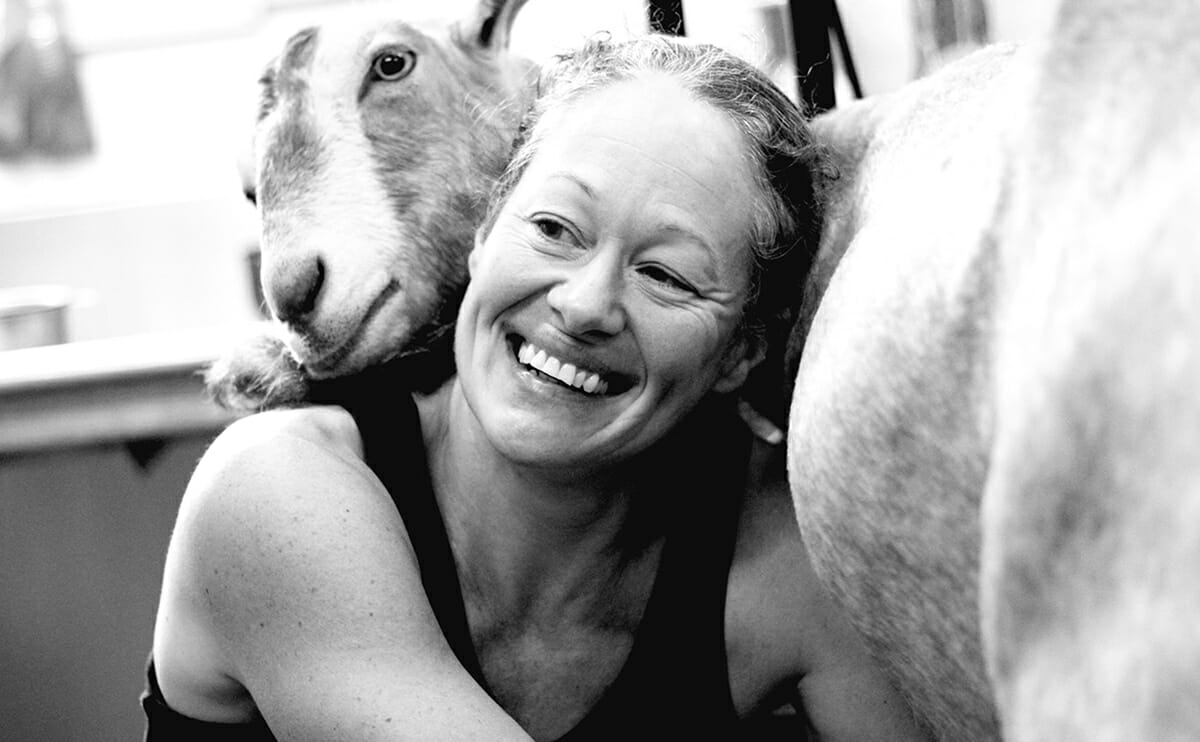 But that emotion was more complicated than simple pride. As a voiceover of Paul Harvey’s 1978 “So God Made A Farmer” speech played, image after image (taken by 10 male photographers) portrayed men muddy, men weathered, men toiling. Men in cowboy and feed hats, plaid flannel shirts hugging their work weary shoulders. Men farmers with cows and barns, men in fields of corn. Men farmers with other men farmers.

Thousands of women, including Marji Guyler-Alaniz, were left scratching their heads at the ad campaign, which generated much discussion online in places like the Atlantic. Although one woman farmer was featured, women represent the fastest growing segment in farming, entering the field at a higher rate than their male counterparts. In fact, the USDA’s Economic Research Service reported in May that the number of women-operated farms had more than doubled between 1982 and 2007. If you add primary and secondary operators, women make up 30 percent of U.S. farmers, with nearly 1 million women working the land. So where were their pictures?

“I read a story afterward that criticized the lack of images of women in the commercial,” says Guyler-Alaniz says. “Two nights later, I woke up in the middle of the night knowing that’s what I had to do. I had to get photos of women farmers out there, build an archive of these women who have long farmed or are getting into farming.”

Although she has a degree in photography and graphic arts, Guyler-Alaniz, 33, was working for an agriculture business based in Des Moines. After her midnight awakening, she quit her job, grabbed her camera and traveled Iowa backroads in her first search for women working the land. A mother of two, Guyler-Alaniz says she travels when her husband can watch their children.

Two months into her project, Guyler-Alaniz has launched FarmHer, a website where she posts photographs of women farmers. Word is traveling. One farmer tells another, and then that farmer tells another. Guyler-Alaniz says she’s hearing from women across the nation who are farming and are open to being photographed as they work. A recent call came from members of 4H who asked her if she wanted to photograph them handling livestock at the Iowa State Fair.

Guyler-Alaniz’s eye picks up on nuances. A hair braid, a stance or a stride. Rather than portraits, she photographs the woman as they work, handling chickens and turkeys, walking the beans. Many of the women who have contacted her are operating small organic farms, but she’s heard from women farming everything imaginable. Guyler-Alaniz says she intends to meet and photograph women farmers from all walks of life and cultures as she sets plans to travel across the country.

FarmHer, she says, is a labor of love. Although Guyler-Alaniz now resides in Urbandale, a suburb of Des Moines, she grew up among farms in Webster City, Iowa where extended family still tends to the land. Her mother, who often travels on the road with her, was also raised on a farm.

Expenses so far are all out-of-pocket. “I just know I’m doing the right thing,” Guyler-Alaniz says. “The images of women farmers have to get out there, we have to have some record of the sweeping change.”

Kate Edwards, owner of Wild Woods Farm in the town of Solon near Iowa City became one of Guyler-Alaniz’s first subjects. Edwards, 27, says she read of Guyler-Alaniz’s search for women farmers via the Iowa-based Women, Food & Ag Network and answered the call.

“I asked Marji to come out to the farm because I want to help other women see that they, too, can be farmers, that it’s a career option” says Edwards, who began a two-acre vegetable farm two years ago and now operates a successful CSA. “I had been an engineer but I just about grew up on a farm. Both of my grandparents were farmers. The thing is, I always thought I wasn’t smart enough to be a farmer. And I had that silly idea that you have to be a man to farm. But two years ago I made the choice to follow my passion and I absolutely love it.”

Guyler-Alaniz says she’s unsure where FarmHer will lead. For now she’s laying out a map, figuring how to get from state to state, farm to farm, looking forward to what she might find each time she steps out of her car and onto the soil.

*The story was changed to reflect the fact that the Dodge ad did feature women.