From the Racetrack to the Buggy

The Amish don't gamble - but they buy their buggy horses from people who do. For horses who don't make it at the races, a second chance arrives in the form of Joel Brenneman. 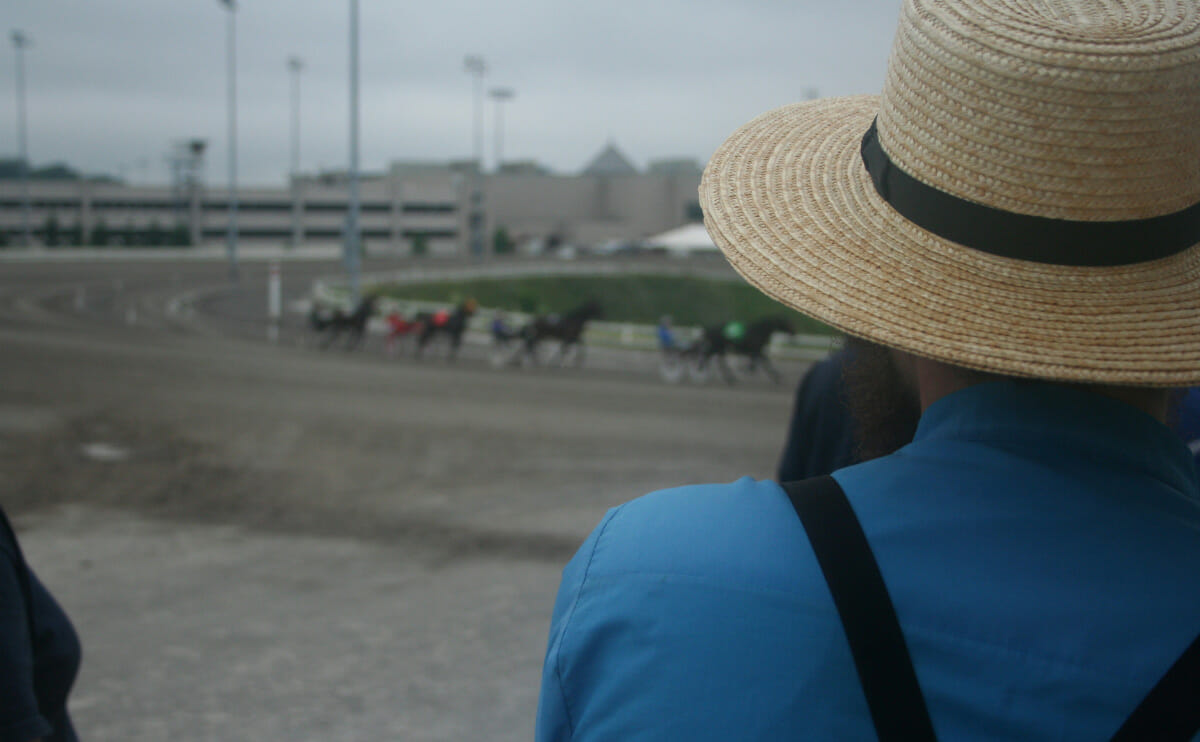 By 8 a.m. on a June day, the stables clustered around The Meadows racetrack, 25 miles south of Pittsburgh, are buzzing with activity. Standardbred horses pulling jogging carts – two-wheeled chariot-like contraptions with a seat for the driver – clip-clop back and forth between the stables and the track for their morning workouts. Veterinarians make their rounds, stable hands muck out stalls. Dozens of horses, vehicles and people are heading in every direction, with right-of-way always going to the horses, the stars of the show.

Qualifying rounds for next week’s races begin in a few short hours, and everyone here, including Joel Brenneman, has plenty to do.

Brenneman remembers the way he was literally shaking with excitement his first day at the track, as well as the self-consciousness he felt about the way he dressed and stuck out from the crowd. That’s mostly gone now.

Brenneman, 34, cuts a unique figure at the racetrack, wearing suspenders over his plain blue shirt, a wide-brimmed straw hat and the no-moustache beard distinctive of his Old Order Amish community. When his wife Rachel calls in the afternoon to check in, they talk in Pennsylvania Dutch. English is his second language, spoken with a faint but distinct Amish accent. Relaxed and easy-going at the track, he strolls straight into the thick of the action, exchanging pleasantries with practically everyone he sees. “What’s up, dude!” exclaims one energetic groom when Brenneman saunters into his stable. Many know him by name, as he does them.

Standardbreds, a breed developed in the 19th century United States for harness racing, are everywhere, hundreds of them. Some will turn out too slow to cut it at the racetrack, but they’ll be perfectly suited to pulling an Amish buggy. Brenneman is a link between the racetrack and the insular Amish community, buying these too-slow horses for resale as buggy-pullers.

Most buggy horses used by the Amish and other related “plain” religious groups begin their lives in racing stables where they’re trained to wear a halter and pull a jogging cart. (This process is known as “breaking” and comes before “training,” the process of getting a broken horse into top racing form). A Standardbred foal with a good pedigree can sell for tens of thousands of dollars, but is always something of a gamble. Some never return anywhere near that in terms of race winnings, and even fast horses get old and slow down, eventually reaching the point of retirement. That makes the Amish, willing buyers of well-trained, strong and buggy-ready horses, a handy option for the owner of a Standardbred with no racing career ahead of it. The ideal buggy horse is a four-to-six-year-old gelding with “classic good looks,” (it’s hard to discern, exactly, what horse people mean by this) that typically fetch no more than $4,000 on the Amish market. In most cases, an owner who sells a horse to Brenneman will do so at a loss, sometimes a significant one. Still, it’s often a better deal than keeping an unproductive race horse around indefinitely, and it gives owners peace of mind to know that their horses are being put to valued use elsewhere.

“If I have a horse that needs a good home, I call Joel,” says Dayne Snyder, one of the many racers whom Brenneman now counts among his friends at the track.

One of the unusual aspects of the business of horse racing is that its primary assets – horses – are affectionate, intelligent animals with personalities as varied and distinctive as human beings. Owners and trainers often form deep emotional bonds with beloved horses that figure strongly into end-of-racing-career decisions.

“I make sure that I know where our horses are going when I sell them,” says Heather Wilder, another owner at the racetrack who does business with Brenneman.

A worst-case scenario, in the prevailing view of the racing community, would be a horse ending up on the “kill market,” bound for a slaughter in Mexico or Canada (no U.S. slaughterhouse has processed horses since 2007). Selling a horse for slaughter is something Brenneman says he never has nor ever will do, although earning the trust of the folks at The Meadows has been a process long in the making and requires constant maintenance.

“Building relationships with people at the racetrack takes many, many years … [and] it’s a huge part of my success,” says Brenneman (a point he reiterates several times throughout the day).

Brenneman begins his mornings at the track (he comes about once a week) walking up and down the length of nearly every stable, making his presence known, chatting and generally doing what we’d call “networking” in more white-collar settings. He makes the two-hour trip from his home in Salisbury, Pa., with a hired driver who also hauls Brenneman’s horses from the racetrack back to the farm. (Different Amish groups generally set their own policies on adoption of various modern technologies and tools; Brenneman does not drive a car or use a computer, but he does use a phone and, sometimes, a tractor on his farm.) Once the buggy horses arrive at his place, Brenneman tries to resell them as quickly as he can, hopefully at a modest profit of maybe a couple hundred bucks.

“There’s not a lot of money in buggy horses,” he admits, between one of the morning’s many stable visits.

Brenneman is also into more potentially lucrative things like breeding, foaling and breaking horses for racing clients. Someone who sells him a buggy horse today might ask him to break a valuable foal later on, so each transaction has value beyond the profit hopefully made on the individual horse.

After one of the heats, a trainer disgusted by the performance of his horse loudly declares it “ignorant” and says he won’t be allowed “back in his barn.” This outburst amounts to a sales pitch to Brenneman, standing nearby.

He talks with a woman about the Welsh Corgis she breeds. He bumps into a man a few stables over who has a Boxer dog in need of a good home. Brenneman says his sister might be interested. They exchange phone numbers and decide to be in touch on the matter. In Dayne Snyder’s stable, where Brenneman has trouble working the coffee maker, he laughs along with everyone else when a friendly joke is made about his Amish technological ineptitude.

Brenneman has developed many, many such friends in the stables here since at his first trip to the racetrack as a wide-eyed 18-year-old. He clearly remembers the way he was literally shaking with excitement that day, as well as the self-consciousness he felt about the way he dressed and stuck out from the crowd. That’s mostly gone now. He does field questions, which he is happy to answer, about his religion and lifestyle from curious folks at the track, especially since Amish Mafia debuted on the history channel. (He hasn’t seen the show, though from what he’s heard about it, he considers it spurious and objectionable.) There are a few sources of discomfort that linger in the cultural gulf that separates Brenneman from the sometimes coarse world of horseracing.

“I hope I’m never comfortable with the cussing, swearing and filthy language,” he remarks.

Brenneman positions himself down by the track when the qualifying rounds begin at 10 a.m. Lasting several hours, today’s qualifiers consist of one-mile time trials, with 15 heats of six to eight horses grouped according to various racing categories. Running a mile at or below two minutes, as any harness racing horse worth its keep will do, is hard work. Horses that fail to qualify have to wait a week before trying again. After three successive failed attempts at qualification, the horse has sit out at least 30 days before making another go at it. If the animal is young or particularly promising, an owner may decide to wait out the downtime, or even turn the animal out to pasture for a longer period of R&R, but horses are expensive to keep around. Boarding alone, not counting training fees, could run an owner $600 to $900 per month.

After one of the heats, a trainer disgusted by the non-qualifying performance of his horse loudly declares that this particular “ignorant” and “rude” horse, which isn’t worth “dogshit,” will not be allowed “back into his barn.” This outburst amounts to a sales pitch to Brenneman, standing nearby. The trainer calls the owner to get an OK on a sale; Brenneman places a few calls to his network of buyers, and just like that, a deal is done. Brenneman writes a check and becomes the new owner of Chef Bo’s Magic – a flunked-out racehorse about to get a second chance on the buggy scene.

When the qualifying rounds end, Brenneman continues wandering the stables and working the phones, chatting up potential sellers, calling potential buyers, making offers and counter-offers. By the time the day wraps up, he’ll have bought five buggy horses. It’s a respectable haul. Sometimes he doesn’t get any. Sometimes he buys a dozen.

Brenneman makes one last stop at the stables of Luis Porfilio, a champion trainer from Argentina who came to Pennsylvania for its more lucrative racing scene. Porfilio has a mare with a sore knee whose racing days are done. They begin their haggling over a banged-up mare’s that’s not worth much buggy-wise. Brenneman floats a figure of $800. Porfilio was hoping for $1000. They agree on a difference-splitting $900. As Brenneman bids his final farewells of the afternoon, Porfilio reminds him to make sure he’s got his stall numbers straight. The filly in the next stall over is no $900, washed-up, sore-kneed horse. No, she’s won Porfilio nearly half a million dollars – a fantastic return on the $7,000 he paid for her, he says with a delighted gleam in his eye.

So much can depend on so little. Only the finest of distinctions in genetics, training and good luck separate these two nearly identical horses in their neighboring wooden stalls, one of them a lucrative, smashing success on the racetrack, the other bound for the gentle anonymity of life in the slow lane, hitched to a buggy along the shoulder of some quiet country road.

(All photos by Andrew Jenner.)

How is being a buggy horse a good life. Ya. I’ve seen them. Poor things