Nik Sharma Blends Science and Food in ‘The Flavor Equation’

The food writer’s new cookbook explains the reactions happening in pots and pans.

Science and food have always had a symbiotic relationship for Nik Sharma.

When the food writer was growing up in India, he received a chemistry lab kit from his parents for Christmas one year. It included an experiment that mixed together baking soda and citric acid to observe the resulting chemical reaction. It fascinated him.

“This was something that was already in my parents’ kitchen, and then to see it behave so magically—and it’s not magic. It’s science—just change in front of you visually was mind blowing as a kid,” he says.

In his new cookbook, The Flavor Equation, Sharma showcases the science of flavor through more than 100 recipes, complete with diagrams and the striking photography he is known for. Drawing from his experience as a molecular biologist, Sharma dissects what influences our perception of flavor. Aroma and taste are part of the equation, says Sharma, but emotions, sight, sound and mouthfeel also play a vital role.

The new book is a follow up to his 2018 tome, Season: Bold Flavors, Beautiful Food, and drills down into the different aspects of taste, including bitterness, brightness, saltiness and fieriness. His first cookbook told a personal story about his life as a gay immigrant and the cultures that shaped his cooking. With his new book, Sharma says he wants to show the logic and science involved in what he does in the kitchen. His recipes are inventive, but still approachable so that home cooks won’t get bogged down in the science. 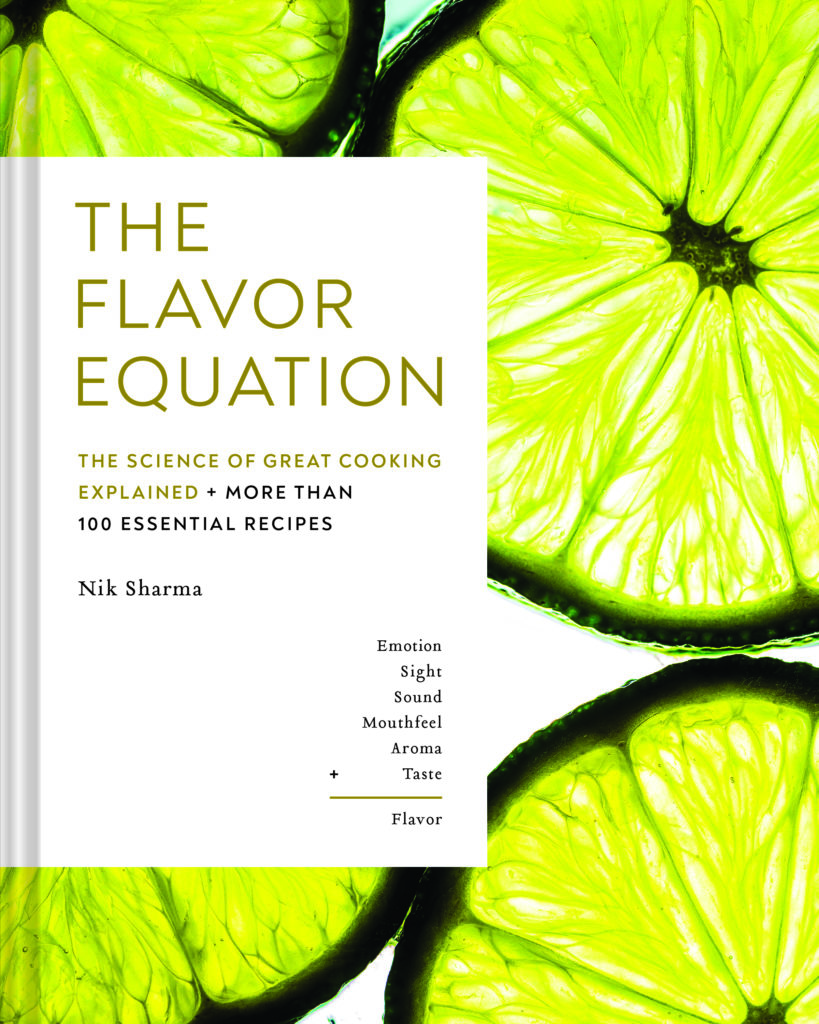 Sharma first came to the United States to study molecular genetics at the University of Cincinnati. He then worked at a pharmaceutical research company until he quit (to his parents’ chagrin) to pursue a career in cooking, food writing and photography. He started working as a pastry cook and launched his popular blog, A Brown Table, before eventually becoming a food columnist with the San Francisco Chronicle. While his career path veered in a different direction away from research, he still applied science to his new work.

Sharma believes that having a better understanding of science can make us better cooks—not just because of the chemical reactions involved, but also because the processes of cooking are similar to those of science. In a similar way that a scientist experiments, a cook tests different combinations, adding varying amounts of different ingredients.

“It’s the same process of trying something, seeing if it works, and if it doesn’t work out, you try to figure it out through different iterations and experimentation,” he says. “But a lot of what’s happening on the stove or in the oven, or when you’re chopping something, at those different points involve different chemical and physical reactions. I think highlighting those things makes you a wiser cook.”

One of the things that drew Sharma to biology was seeing different ingredients change color.  He loved watching turmeric turn red when mixed with soap and change back to yellow with the addition of an acid like vinegar. So next time you’re caramelizing onions or activating yeast to bake bread, Sharma suggests stopping for a moment to think about and appreciate the incredible things that are happening in your frying pan.

“It boggles my mind every time how marvelous the whole thing is,” he says.

The following recipe is reprinted from The Flavor Equation by Nik Sharma with permission by Chronicle Books, 2020. 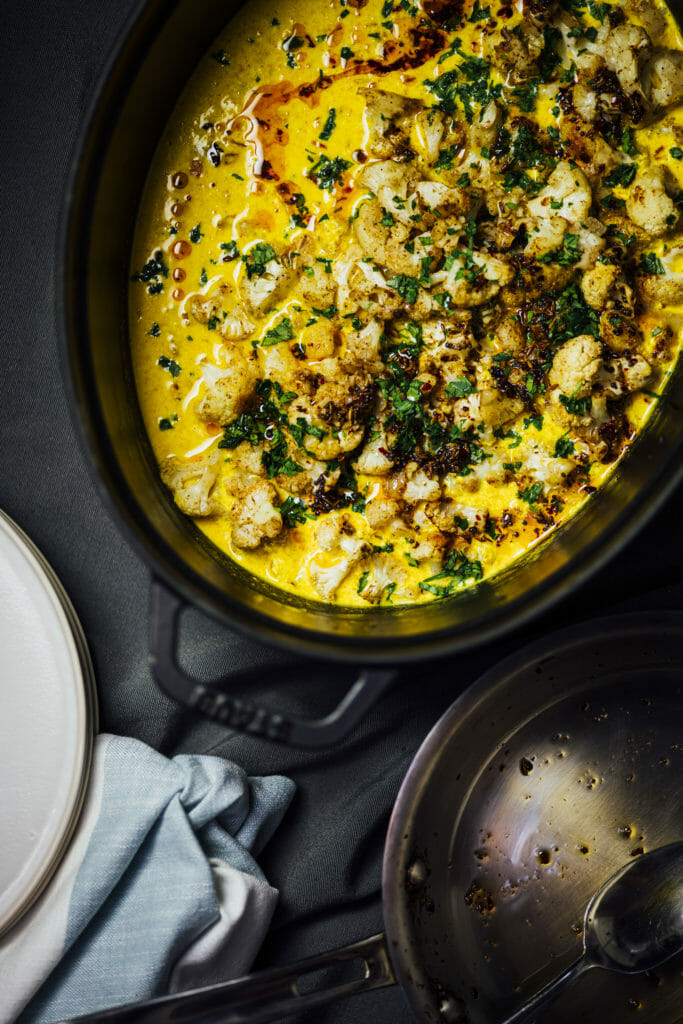 This recipe takes advantage of kefir (buttermilk can be substituted) for its bright acidity. I prefer to use a bottle of freshly opened kefir or buttermilk here, because as these liquids age, the lactic acid increases, which not only leaves a strong tart taste but also causes the milk proteins to curdle quickly on heating. If you have leftover kefir, use it to make the Blueberry + Omani Lime Ice Cream.

+ Using the acidity of fermented dairy such as kefir and the Maillard reaction creates a bittersweet taste and new aroma molecules in vegetables.

+ Chickpea flour, which contains starch, acts as a thickener for the base of the sauce.

+ The sound of the seeds sizzling is a good indicator of how hot your oil is; if the oil is hot enough, they will sizzle immediately and brown quickly.

While the cauliflower is roasting, place a deep, medium saucepan or Dutch oven over medium-high heat. Add 1 Tbsp of the oil to the pan. Add the onions and sauté until they just start to turn translucent, 4 to 5 minutes. Add the turmeric and chilli powder and cook for 30 sec­onds. Lower the heat to low and add the chickpea flour. Cook, stirring constantly, for 2 to 3 minutes. Lower the heat to a gentle simmer and fold in the kefir, stirring constantly. Watch the liquid carefully as it cooks until it thickens slightly, 2 to 3 minutes. Fold the roasted cauliflower into the liquid and remove from the heat. Taste and add salt if necessary.

Heat a small, dry saucepan over medium-high heat. Add the remain­ing 2 Tbsp of oil. Once the oil is hot, add the cumin and black mustard seeds and cook until they start to pop and the cumin starts to brown, 30 to 45 seconds. Remove from the heat and add the chilli flakes, swirling the oil in the pan until the oil turns red. Quickly pour the hot oil with the seeds over the cauliflower in the saucepan. Garnish with the chopped cilantro and serve warm with rice or parathas.

This is my regular garam masala; note the absence of a few aromatic spices such as fennel and a smaller amount of green cardamom in this version.

Heat a small, dry stainless-steel or cast-iron skillet over medium-high heat. Turn the heat to medium-low and add the cumin seeds, coriander seeds, fennel seeds, black pep­percorns, bay leaves, cinnamon, cloves, green and black cardamom pods, and star anise. Toast gently by rotating the pan to circulate the spices until the spices become fragrant, 30 to 45 seconds. Be careful not to burn them; if they do burn, discard them and start fresh.

Transfer the toasted spices to a small plate and let cool completely. Transfer the cooled spices to a mortar or spice grinder. Add the nutmeg and grind to a fine powder. Store the spice mix in an airtight container in a cool, dark place for up to 6 months.

I shall be trying this very soon, off to the market…

Popular
Why Don’t We Eat Turkey Eggs?Dan Nosowitz
7 Smokable Plants You Can Grow That Aren’t MarijuanaBrian Barth
6 Differences Between Llamas and AlpacasAndrew Amelinckx
What’s the Story, Wishbone?Rebecca Katzman
Goat Sex: Everything You Wanted to Know But Were Afraid to AskAndrew Amelinckx
Explore Modern Farmer
Related
Animals, Environment, Health
To Stop New Viruses Infecting Humans, We Must Protect Bat HabitatAlison Peel, Peggy Eby, Raina Plowright
Animals, Food & Drink, Lifestyle
The Great (Sticker Shock) ThanksgivingLindsay Campbell
Environment, Food & Drink, Water
Egg Whites Could be the Key to Cleaning Our OceansShea Swenson
Environment, Food Waste, Technology
Could Dissolvable Cranberry Film Replace Plastic Packaging Someday?Emily Baron Cadloff
wpDiscuz
We use cookies on our website to give you the most relevant experience by remembering your preferences and repeat visits. By clicking “Accept”, you consent to the use of ALL the cookies.
Cookie settings ACCEPT
Privacy & Cookies Policy