One aquafarm has set out to make America a producer of this delicacy. 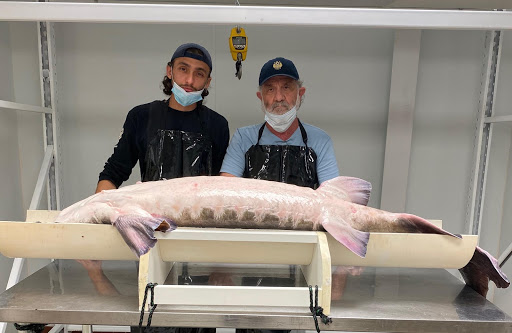 It’s a rare, but sought after delicacy, packed with flavors reminiscent of the ocean and a creamy, buttery finish. The black beady eggs of the beluga sturgeon, otherwise known as the king of caviar, have long been regarded as a foreign treat. The caviar, which comes from the Caspian Sea, has been illegal in the United States since 2005 when the US Fish and Wildlife Service (FWS) imposed a ban on beluga imports due to the fish being a critically endangered species.

But faraway and unattainable no more—after an onerous 17 years, Sturgeon Aquafarms, a 120-acre farm in Bascom, Florida has managed to be the exception of this rule. This year, it produced the first homegrown batch of the caviar that can be commercially sold in the US.

Mark Zaslavsky founded the farm in 2001 to bring the fish to the US, as its caviar was previously only imported. He travelled to Russia to ship young beluga sturgeon on airplanes back to Florida and was able to import about 55 fish before the ban took place in 2005. This original batch of fish served as the broodstock (the population used for breeding fish) and still remains so at the facility. In 2016, the farm was granted the first exemption by the FWS to sell the product on the condition that it would not rely on the Caspian Sea and help restore the wild population.

“When people think about beluga caviar they think ‘oh it’s Russian.’ That is false. America is now the home to beluga caviar… the process has paid off,” says David Bashkov, Zaslavsky’s grandson, who helps oversee production.

The process to get the operation off the ground took almost two decades as beluga sturgeons need around 10 years to mature to the point that they’re mature enough to produce eggs for caviar. It also didn’t help that Hurricane Michael tore through the farm in 2018 and set the operation back about two years.

Bashkov says the process was still faster than it would have been in the wild. In the Caspian Sea, it takes around 15 to 20 years before these fish produce eggs. They grow faster on the farm because of controlled and optimized conditions such as water temperature.  Though there are roughly 5,000 beluga sturgeon swimming in the farm’s tanks, the facility has more than 30,000 fish total that it uses to make other types of caviar. Feeding this many fish costs Zaslavsky’s farm $40,000 a month. This partially explains why a half-ounce tin of the beluga caviar starts at $420.

With the help of a full time biologist, farm staff regularly conducts ultrasounds on the fish to track their development. Samples of eggs are also extracted and examined under a microscope to ensure that they are ripe enough to be fully harvested. Once eggs are harvest-ready, an incision is made on the fish’s abdomen, which allows for the removal. The bony fish, which is the largest of all the sturgeon, grows up to 15 feet and can weigh up to 2,400 pounds. Bashkov says that the amount of caviar extracted from the fish is about 10-15 percent of its total body weight.

They are then taken to a processing room where the eggs are cleaned with water and weighed. Processors add a small amount of sodium before putting the caviar into tins. After that, they are stored in a cold room for up to three months so that the eggs get larger and the flavor profile expands. The farm has made this year’s batch available to purchase online.

To fulfill a commitment to conservation, Sturgeon Aquafarms has donated about 160,000 fertilized eggs to countries in the surrounding region of the Caspian Sea. Bashkov says that conservation efforts are arguably more important than the caviar harvesting itself.

“At any given moment we can send off fertilized eggs to regrow the population,” he says. “We have generations of these fish. We have years and years and years of beluga sturgeons to come.”

As Bashkov’s family’s farm has now made America a producer of this delicacy, he’s hopeful it can play a role in ensuring the prized fish is here to stay.

Fish raised up in aquatic farms spend their entire lives in an overcrowded captivity, ingesting filthy water contaminated with their compounding excrement and have to endure conditions supporting an unhealthy, unnatural environment….this is a never ending hell that lasts a decade or more for these intelligent feeling animals who are then sliced open and die or who are regularly tortured to remove their eggs all in the name of GREED. This contaminated artificially raised fish then is fed as food to humans….and then people wonder why they become sick….