How Five Friends Are Saving Their Tulip Farm From COVID-19

They’ve returned to their roots to keep a cherished Washington industry alive. 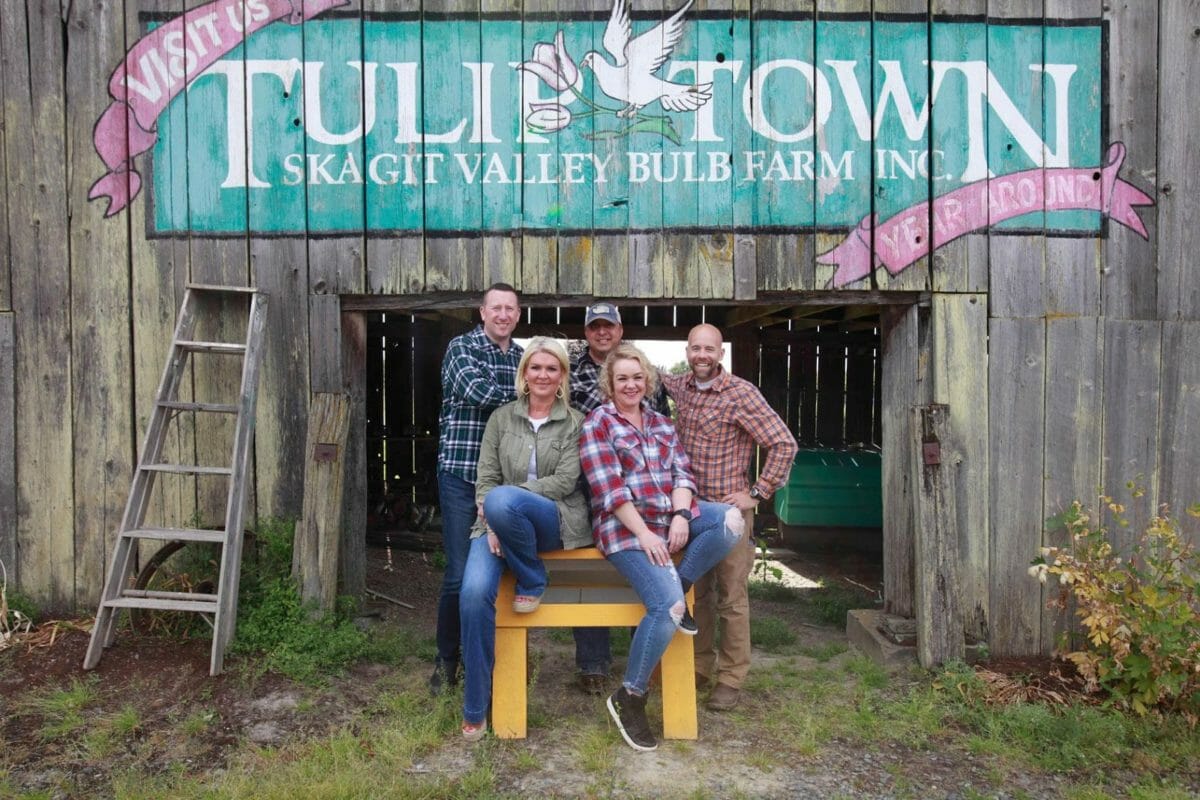 In Skagit Valley, Washington, the sight of sprouting tulips means far more than a sign of spring.

The iconic blooms have been the centerpiece to the region’s agritourism sector since the launch of the Skagit Valley Tulip Festival in 1984. And more tulip bulbs are produced in Skagit County than any county in the US.

So when Skagitonians Andrew Miller, Randy Howard, Donnie Keltz, Rachael Ward Sparwasser and Angela Speer heard that one of the only two growers left in the valley were looking to sell their farm, they knew it was an opportunity to preserve an important piece of their hometown’s identity. This squad of five high school friends felt it was time to give back to the place that gave them their start in life.

“We all grew up in the field,” Miller says. “Agriculture is such a big part of what we think really helped shape us to be successful.”

In June 2019, the group purchased Tulip Town, a 30-acre community treasure, and left corporate careers in law and finance behind them. But when Washington Governor Jay Inslee issued a stay at home order in March due to the COVID-19 pandemic, the group had to shut down the farm on the cusp of their inaugural season. And for the first time since its inception, the Skagit Valley Tulip Festival was cancelled.

The Tulip Town team quickly needed to figure out how they would make up for the huge amount of lost revenue during a vital few weeks for the farm. The farm typically makes around 90 percent of its revenue during the month of April, when people attend the tulip festival. Washington State University estimates the tulip festival brings $65 million of revenue and draws crowds of roughly 300,000 to the county.

“As if farming is not hard enough, we had to turn around and completely redo our business model,” Miller says.

It took just a matter of days for the team to come up with solutions for how it was going to make up for the festival’s cancellation, and the farm’s closure. They started online flower campaigns inviting people to buy or donate flowers to friends, family or workplaces. The group also created a membership that gives locals the opportunity to help invest in the future of the farm, and is set to launch an app that will feature its fields in virtual reality.

The group says it has sold thousands of bouquets during the pandemic, and has had a lot of success with its “What’s at Stake” campaign, which invites people to buy a physical stake that is planted in the farm’s field. They say that more than 4,000 bouquets have been purchased for local hospitals and nursing homes through their “#ColorforCourage” initiative.

“It’s been a very elaborate dress rehearsal… but we feel people really want to see us succeed,” Speer says. “I think one thing that’s become more clear to us is the importance of tulips in the valley. We know that all this effort that we’re putting in, it’s super important to us to be saving our farm, but it’s also very important to our community.”

The Tulip Town owners hope that they will be able to safely welcome the public back to their fields in the future. But regardless of how and when that will happen, they say they’re focused on strengthening community connections and building on the area’s rich agriculture history in the years to come.

It is nice to know I can see tulips en masse in the US. I am too old to go overseas for the show. I will be there next year if I am still around.

I’d buy high res flower picture ebooks and wallpapers. Need something pretty amidst all the news. Etsy store would make it easy to start with the digital products. Ebook with purchase option for bulbs of the tulips shown! Deer ate this year’s tulips.

What a beautiful site and sight. We were there in 2019 for a wedding and during the tulip festival. I hope I can help in someway someday