Meet the Winemaker Who Left California to Grow Grapes in Vermont

Krista Scruggs uses hybrids to produce wines without additives, fertilizers, pesticides or any other chemical intervention from vine to vat. 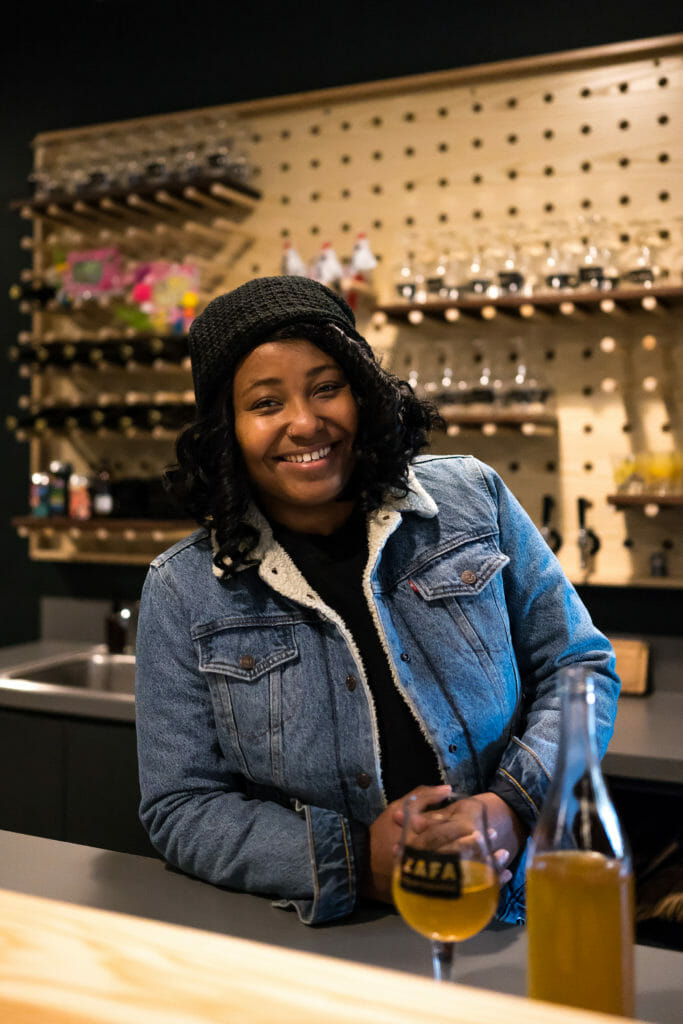 The young winemaker is often asked, “How do you grow grapes in Vermont, and why?” / Photo by H.B. Wilcox

On a clip of biodynamic vineyards in Grand Isle, Vermont, farmer and winemaker Krista Scruggs is crafting wine from the soil up — in an environment once believed to reject grape-growing entirely and using the wine world’s most trendless, prestige-less natural hybrids to do so.

One of Wine Enthusiast’s Top 40 Under 40 Tastemakers of 2018, Scruggs left California to farm and ferment biodynamic bottles in a couple of vineyards that flank the rugged coast of Lake Champlain. She launched her own project, ZAFA Wines, in the fall of 2018, along with CO Cellars, a wine-cider collaboration with local apple brewers Shacksbury Cider. Beyond her crop of vines, Scruggs recently opened a Burlington-based tasting room, tucked in the nooks of a refurbished soda plant.

Like biodynamic farming, hybrid grape varietals like Marquette and La Crescent are battling a rep for being misunderstood. “Hybrids are seen as mutts,” says Scruggs, “but I’d rather have a mutt than a clone.” Crossed by hand, not by petri dish, hybrids merge vinifera (the chief source of Old World wines and table grape varietals) with wild-growing American species that are hardy enough to survive a dynamic swath of climate and landscape, explains Scruggs.

“I’m often asked, ‘How do you grow grapes in Vermont, and why?’” says Scruggs. “But these varietals are partially native. They’re built to survive here.” Half of the hybrids’ genes have existed for hundreds of years and grow wild, she continues, making them naturally resilient to many of the diseases they’re exposed to in the Green Mountain State. These grapes are inherently designed to survive better than vinifera transplants that are intended genetically for, say, southern France. “Part of the grapes’ genes are meant to be here,” she says, “so why wouldn’t we grow grapes in Vermont?”

As a biodynamic vigneron, Scruggs uses these hybrids to farm and produce wines without additives, fertilizers, pesticides or any other chemical intervention from vine to vat. Soil fertility and diversity in the vineyard’s ecosystem are paramount, so problems among the grapevines (such as an invasion of leaf-chomping Japanese beetles) require rethinking symbioses within the entire operation rather than locating a tank of insecticide. Still, biodynamic farming is not zero-intervention work; it is scientific and painstaking labor.

“You’re looking at that plant every day from January 1 to the last day of harvest,” says Scruggs. “Wine is made in the vineyard, and every decision made in the vines affects what’s made in the winery. You can’t have good wine unless you’re farming it properly.”

One might think that pruning in subzero temperatures and battling snow torrents are the hardest parts of Vermont grape farming. (Fair guess.) But, says Scruggs, it’s the humid, rain-logged summers that pose the toughest challenge. “You’ll get heavy rain and then an 80-degree day during the growing season,” she explains. “That creates an incubator for disease, which means pulling leaves every day on foot to create airflow throughout the canopy.” As a biodynamic farmer, minimizing disease involves recalculating that natural symbiosis within the vineyard’s ecosystem, not putting a Band-Aid on the issue with chemical inputs. The result may be an 80 percent crop loss one year, even though those plants are getting stronger and stronger, says Scruggs.

On Ellison Estate Vineyard in Grand Isle, among Vermont’s oldest plots of hybrid grapes, Scruggs converted 10 acres of 14-year-old vines from conventional to biodynamic in 2018. It was the vineyard’s first year of growing without synthetic pesticides. The crop was supposed to cultivate, at best, five tons of fruit, but Scruggs and her crew harvested seven tons.

“Those plants were in shock,” says Scruggs. “They could breathe. They didn’t know how to produce on their own without insecticides and herbicides, but they can now. That’s a beautiful thing. Seeing that transition? That’s why I’m a farmer.”

Vignerons get one shot at their crop and craft each year. If they’re lucky, they’ll have 40 rounds in a lifetime. Lose a plant and it takes three years to replace that vine. Scruggs is clear: There are high stakes to shoulder, but farming is the ultimate act of adaptation and collaboration. Next up, she is releasing her 2018 vintage and planting 10 more acres of biodynamic vines in Grand Isle in May.

“To make wine is to be in the vineyard, taste a grape and imagine what to do with it,” says Scruggs. “With wine, you’re telling the story of your crop. Why wouldn’t you want to have that connection, that story?”

I need to be a farmer.

So happy to find this thread!

Related
Animals
5 Reasons Every Winery Needs a DogElla Buchan
Food & Drink
Bayer Will Pay Vineyard Owners Millions After Fungicide Ruined a Lot of...Dan Nosowitz
Food & Drink
Can Grape Seeds Help You Lose Weight?Tyler LeBlanc
Lifestyle, MTMF
Meet 20 Modern Farmers Who Bring a Fresh Approach to AgricultureModern Farmer
wpDiscuz
We use cookies on our website to give you the most relevant experience by remembering your preferences and repeat visits. By clicking “Accept”, you consent to the use of ALL the cookies.
Cookie settings ACCEPT
Privacy & Cookies Policy