5 Reasons Every Winery Needs a Dog

From protecting weed-eating sheep to sniffing out devastating disease, these dogs help keep the wine flowing. 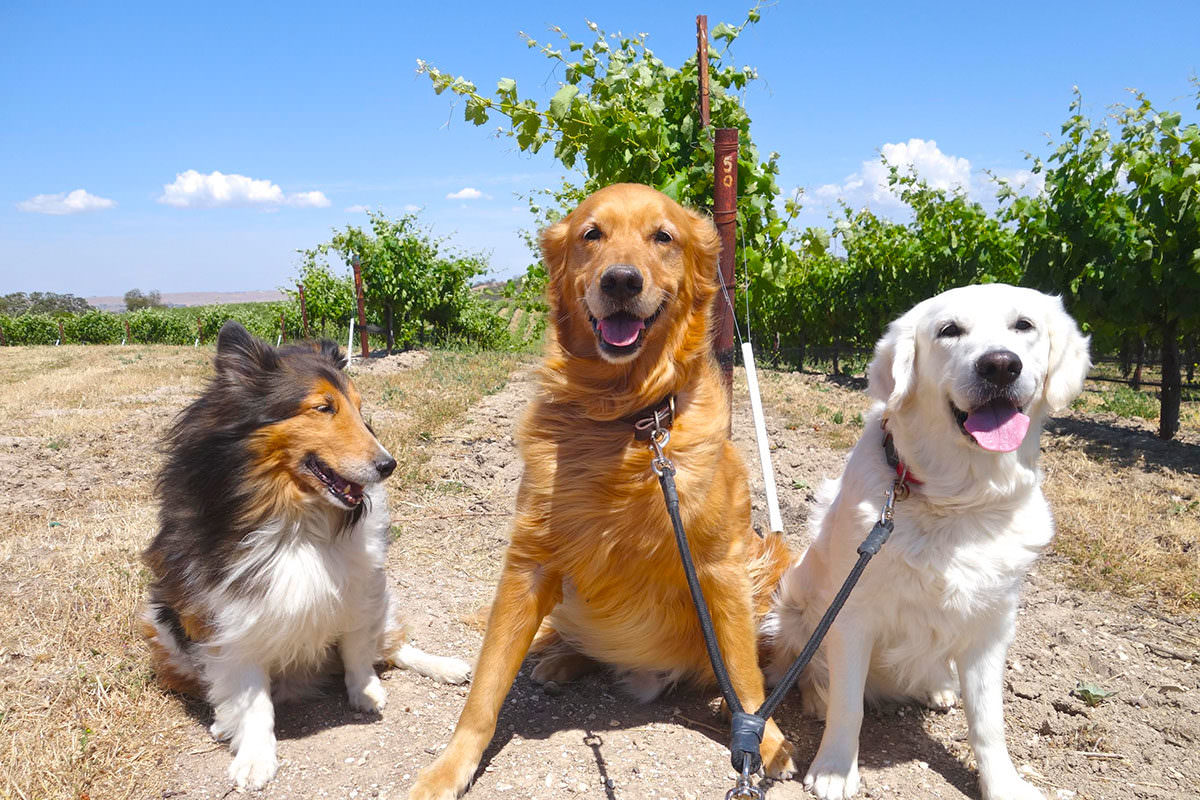 Dogs can help protect other animals, sniff out pests and keep critters away from grapes before harvest, helping vineyards to cut down on the use of machinery, pesticides and other chemicals.

California – which produces about 90 percent of domestic wine – has some of the hardest-working canines around. Here, their owners share why they believe every winery should have a dog.

1. They Can Detect Vine Diseases

At Honig Vineyards in Napa Valley, Honey, a Labrador retriever, is learning to sniff out a disease that can devastate entire vineyards.

The owners are working with the Bergin University of Canine Studies in Rohnert Park, California – the only accredited US university specializing in learning about and training dogs.

During a trial in 2008, researchers at Bergin trained sniffer dogs to detect grapevine mealybug that feed at the bases of shoots, preventing fruit growth. The bugs can also cause the spread of grapevine leafroll virus, which can dramatically reduce crop yield.

Now the Honig family has hired a trainer currently studying at the university to prepare Honey for new job as a disease detecter.

Stephanie Honig said: “Honey’s job is very specific – detecting the scent of the grapevine mealybug in a vineyard. If a vineyard has the bug it’s devastating to the vine. We don’t have it at Honig, but it does exist in some surrounding grape-growing areas.”

This practice also fits with sustainable winemaking, she added. “If a dog detects a bug, pesticides are not needed since the infected vine is removed.”

Dr. Bonnie Bergin, the university’s founder and president, told us there is far more interest from vineyard owners now than back in 2008, when many preferred to stick to cheaper but inorganic forms of pest control.

“Sustainable organic vineyard management has become a more financially rewarding pursuit than in 2008, and the vine mealybug problem has increased over the intervening years. As such Bergin University intends to introduce its Canine Vine Mealybug Scent Detection Project into its current year curriculum,” she said.

Honey has another crucial role. She is being trained as a diabetic alert dog for the owners’ nine-year-old daughter, who has type 1 diabetes.

“The goal is that she be dually-trained, which has never been done before,” added Stephanie.

2. They Watch The Flock

At Navarro Vineyards in the Anderson Valley, a flock of sleep graze the fields, removing the need for weedkiller. But they couldn’t do their job without Navarro’s four working dogs – rescue mutt Ferb, an Anatolian called Dash, and Kuvasz-Maremma cross breeds Bella and Regina – whose main job is to keep them safe.

“The dogs protect the animals from wildlife like wild pigs and mountain lions,” said Karin Strykowski, Navarro’s PR manager. “Whenever we see tracks, our vineyard workers want the dogs.”

The winery is also home to two retirees, a Maremma and a Great Pyrenees. After a few years of hard work, Pecorina and Cappo now just hang out on the ranch.

3. They Keep Vine-Munchers at Bay 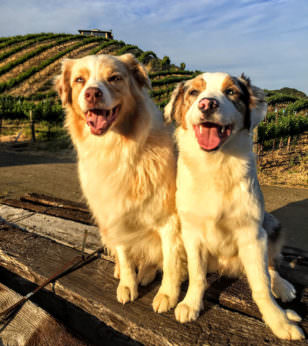 Ruby and Brix help keep their winery safe from deer, who can eat the crop.

Dogs can also be beneficial when it comes to spooking deer, which can wreak havoc by stripping the vines.

Chris Behr, owner of Oso Libre Winery and Ranch in Paso Robles, has a pair of Australian Shepherds, Ruby and Brix, who do just that (the latter named for the system of measuring grapes’ sugar content).

Their other tasks include herding the sheep and alpaca, which eat weeds and fertilize the vines in winter, and catching vineyard enemies such as gophers and squirrels.

“Often a stray deer will get into our vines only to regret it immediately as it is quickly escorted out,” said Chris. “In January, we then use our Aussies to move our Angus herd in and out of the vineyard to work with the sheep and alpacas for limited hours per day, as cows eat far more per hour. This fattens up our future beef and controls our vine rows, allowing us to stay off our tractor saving time, fuel, herbicides and fertilization needs.

“We are SIP (Sustainability in Practice) certified as a result of these techniques, and our Aussies are an integral part of this process. They definitely work for a living and live to work. A working ranch and winery without working dogs is not working on all cylinders, in our opinion.”

The dogs of Kula Vineyards & Winery in Templeton, CA inspire not only the business’s name, but also it’s look. Kula, which means “golden,” was chosen in honor of the owners’ two Golden Retrievers, Ehime and Kona. The pups are also featured on the wine labels, along with other furry family members.

“We asked our label designer to include them because dogs have always been a big part of our life, and when we started our vineyard and winery, it only made sense that they be a big part in that as well,” said Ayako, who owns the vineyard with husband Chris.

But mutts at more than mascots at Kula. The Williams also have a Shetland Sheepdog, Kahlua, who has a sixth sense when it comes to winged invaders, which will can strip the vines of fruit before harvest.

“Kahlua is almost 13 years old. He can’t hear much now, but he can still see and smell very well,” said Ayako. “One evening, many little birds flew over to our vineyard. Kahlua’s tail started to go up slowly and he barked like crazy at them. The birds who tried to land on the vines flew away.”

Most vineyards in the Central Coast area have dogs, Ayako added, both as companions and workers.

“Our neighboring vineyard’s dog is outside day and night. He chases after deer in the evening and barks at coyotes at night, protecting the property from animals,” she said.

5. They Are Great at Boosting Sales

All dog lovers know what charmers their pets can be. Throw them into the mix with a sunny, vine-combed landscape and award-winning wines, and you have a winning combination. 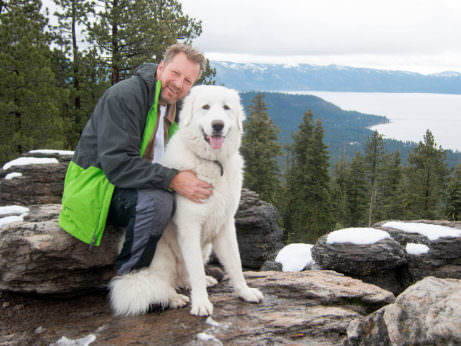 Yep, we’d buy anything this dog is selling – especially wine.

And he reckons they’re top dogs when it comes to selling bottles of Syrah and Albariño to those who stop by the tasting room.

“Funnily enough the dogs sell more wine than we do,” said Damian. “They certainly work the crowd. Really it’s part of making customers feel at home.”

Millie does have another job aside from entertaining customers, keeping mountain lions and coyotes at bay. “Her nocturnal bark can rattle the windows in their frames,” said Damian.

Do you have any issues with your dogs eating any of the grapes? I would like to grow grapes around my house, but am worried my dog may try to eat the grapes. Knowing that grapes are toxic to dogs. Thank you!

Same question as Paul – what about the dogs eating the toxic grapes?

Popular
7 Smokable Plants You Can Grow That Aren’t MarijuanaBrian Barth
6 Differences Between Llamas and AlpacasAndrew Amelinckx
Move Over, Mezcal. A Sustainable Tequila Alternative Is Taking Over.Hollie Stephens
Why Don’t We Eat Turkey Eggs?Dan Nosowitz
Record-Breaking Egg Profits Prompt Accusation of Price GougingClaire Carlson, The Daily Yonder
Explore Modern Farmer
Related
Features, Food Security, Labor
The Rise of Virtual Farmers MarketsLeah Borts-Kuperman
Environment, Labor, Water
California Farms and Farmworkers Attempt to Recover From Record FloodsNaoki Nitta
Food Security, Labor, news
A New Egg Co-operative Has Hatched in the Western U.S.Lindsay Campbell
Food Waste, Plants, Technology
New Solar Panels Allow Farmers to See the LightNaoki Nitta
wpDiscuz
We use cookies on our website to give you the most relevant experience by remembering your preferences and repeat visits. By clicking “Accept”, you consent to the use of ALL the cookies.
Cookie settings ACCEPT
Privacy & Cookies Policy