Is Rhubarb Wine the New Rosé? This Maine-Based Winemaker Thinks It Just Might Be - Modern Farmer
Lifestyle

Is Rhubarb Wine the New Rosé? This Maine-Based Winemaker Thinks It Just Might Be

Amanda O'Brien of eighteen twenty wines in Portland, Maine, shares how she came to help one of New England's hottest wineries. 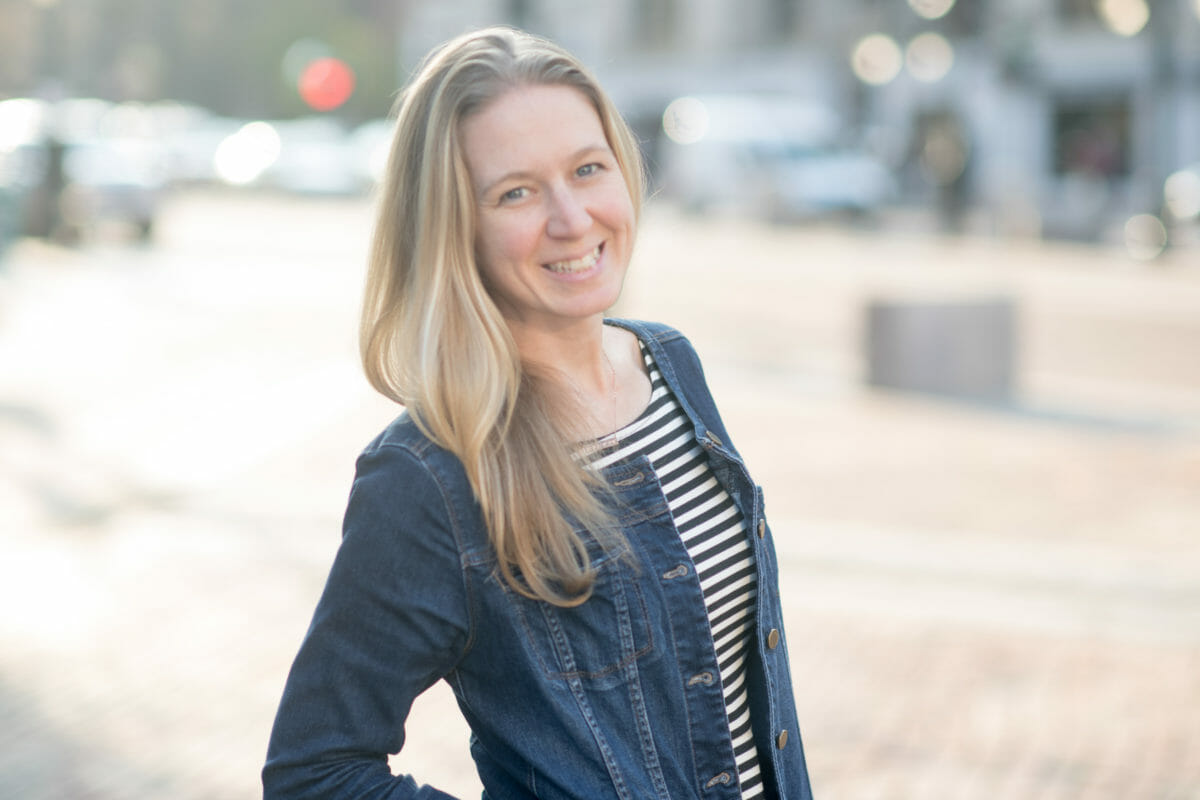 We caught 39-year-old winemaker and owner Amanda O’Brien of eighteen twenty wines (1820 is the year Maine became a state) on the ferry home to her native Peaks Island, just off the coast of downtown Portland, earlier this month to chat more about why people should #DrinkRhubarb:

MF: How did a marketing executive and Islander from Maine end up as a winemaker?

Ever since I could start working, I’ve always worked in hospitality, restaurants, and marketing. I love wine and cocktails and cocktail design. A few years ago, wearing my marketing hat, I started working with a company in Burgundy, which gave me the opportunity to drink the best wines in the world, but I also realized that this renown region is really just a bunch of farmers who care deeply about what they produce – that was a huge a-ha moment for me. Around that time, my friend brought up in conversation that he’d been making rhubarb wine at home, and I had the same reaction as everyone: that doesn’t sound good. But rhubarb grows really well in Maine, it likes Maine winters, it comes up early in the spring, and it’s easy for farmers to grow.

MF: And that’s how eighteen twenty was born?

My friend who was making the rhubarb wine wanted to bring it to market, so we worked together to figure out how. We started scoping out commercial spaces, then I opened the production facility and tasting room. Now, I’m just trying to grow the production to meet the demand, It’s a good problem to have, but it still causes some sleepless nights. 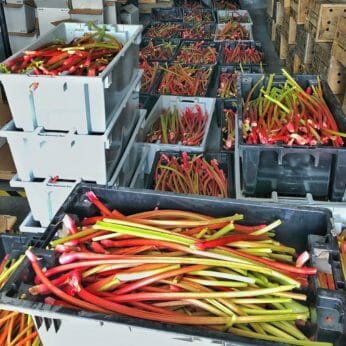 Wine isn’t usually the first thing that comes to mind when you think rhubarb, but the crop grows very well in Maine, has a great yield, and is far more economical than grapes. And it actually makes for a nice, slightly acidic, dry wine. Photo by eighteen twenty/Amanda O’Brien

MF: Tell us about your product.

Our wines are Rha, the flagship dry and slightly acidic rhubarb wine, Honeoye, a rhubarb-strawberry wine that’s dry and tart, and Wintrus, a dry and complex rhubarb wine aged for six months in cabernet barrels. Our two ciders are Ohm, a dry English-style cider made with Maine “eating and cooking” apples, and Ohm’s Law, that same cider aged in cinnamon whiskey barrels to give it a little more complexity and kick.

Rhubarb is a low-maintenance crop It’s also a spring crop, the first to come up, so what I’ve heard from the farmers I work with is that it’s a really great time and crop for them, it grows off to the side and harvests in a “shoulder season” between investing in the summer and the fall harvests. The motivation now is getting more farmers growing rhubarb – and getting more rhubarb at the farms we’re currently working with.

MF: How do you fit into the hundreds-of-years-old tradition of New England fruit wines?

Rhubarb wine was a big thing in the 1800s: historically, when farmers had less overcrop, they would pickle or ferment what they had left – and anyone who has rhubarb has too much rhubarb. In the 1860s in particular, rhubarb wine was cool, it was a thing, and we’re going to make it cool again. During Prohibition, New Englanders were still making rhubarb wine “for medicinal purposes”. Rhubarb wine tastes a lot like rosé, and has a great yield: one pound of rhubarb equals one bottle of wine. Rhubarb is also just a dollar or two a pound wholesale, much more economical than wine grapes, or even other edible summer/fall fruits.

The criticism and stereotype with many fruit wines is that they slap you in the face with the blueberry or strawberry or whatever. But rhubarb is pretty subtle. Even wine sommeliers try it and can’t figure it out, and that’s a great compliment. I’m never going to convince a wine snob or wine judge to think of our wine the way that they would one from Burgundy, but thanks to the craft beer movement, people are more adventurous with what they’re trying. Rhubarb wine could pretty easily become the next rosé.

Most people don’t know that there are 60 different strains of rhubarb, and I want to test the qualities of each one that I can get my hands on. What’s the difference in the sugar content, the acidity levels, etc.? Everyone immediately thinks of the pink and green rhubarb, but there are other heirloom varieties that are more wiry, or more green. Wine is made from hundreds of different wine grape wines to make different varietals, so why can’t we do that with rhubarb? Two of the ones I’m looking at right now are Crimson Red and Victoria, and then I’m excited to play with the names. I also want to find out: Is there a terroir in Maine? Grapes are more delicate, so maybe they take on more of that then rhubarb, but no one knows. Yet. I’m working with the testing facility at the University of Maine that will help me test different rhubarbs and areas and see which additional small-production or single-crop wines we can do in the future. 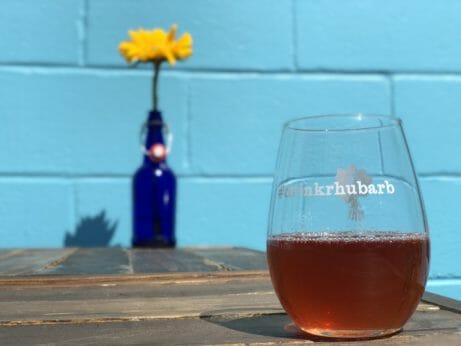 A glass of one of eighteen twenty’s signature blends on display at their Portland, Maine, tasting room and winery. Photo by eighteen twenty/Amanda O’Brien

MF: Where do you get your rhubarb from? What’s your relationship like with farmers?

My rhubarb comes from Dole’s Orchard in Limington, Maine, and Spiller Farm in Wells, Maine. They’re both providing rhubarb and strawberries. My apples for the hard ciders are also coming from them, and we use commercial winemaking yeast, nothing too crazy. We have a third farm that we bought rhubarb from this year in Carmel, Maine, and there are two other local farms I’m hoping to add for next year.

MF: What does a “year in the life” at eighteen twenty look like? What are your seasons?

The idea is to get ahead of the calendar: right now, I’m behind because we’ve sold out, and I can’t get more rhubarb until May, and then it takes me at least six weeks to ferment, which puts me in August. But then we’ll have product for the holidays. What sets me apart from most wineries is that I’m working with actual produce, not juice. All of my production and fermentation happens in the production facility, which is also our tasting room. Rhubarb comes in, we wash it, cut it, and prepare it to be frozen at a place in Portland that’s traditionally only been used by fisherman, and then there’s me with my 1,000 pounds of rhubarb, freezing it before pressing to break down its fiber and sugars. Then we press it with an apple press, add the yeast, a few tears, and make wine.

“Thanks to the craft beer movement, people are more adventurous with what they’re trying.”

MF: Tell us about your new taproom.

We’re in a really cool area of Portland called East Bayside, also affectionately known as “Yeast Bayside” because we’re in a walkable cluster of breweries and wineries, which is awesome because it’s easier to get people to visit us. The Maine Brewbus brings people to us every weekend on their Not Your Average Wine Tours. In the summer, we’re making wine spritzers: something light and refreshing that you can drink outside while you watch the sunset. We have different food trucks that set up shop, there’s a marshmallow cart comes once a month with 20 different kinds of marshmallows and graham crackers and we’ll do s’mores pairings with the wines and ciders. Those are really fun and going really well, it’s great to have another local entrepreneur to collaborate with. My wine is a really dry wine, so a fatty and stick-in-your-mouth sugar pairs really well – we did a candied maple bacon marshmallow pairing recently that was super awesome.

MF: What else does the future hold for eighteen twenty and rhubarb wine?

At the end of August, we’re releasing our fourth rhubarb wine, Dottie Mae, a wild-fermented and slightly sweeter wine. It’s named after my grandmother, Dot Flynn, who was sweet, kind, and a strong, female role model. She once snuck out of her house to go ice skating and broke her knee…in her 60s. She bucked the system to become one of the first female mail carriers. She spiked her Tab with whiskey. She was a legend.

MF: Any advice for aspiring local winemakers, brewers, or rhubarb-product-makers?

The same advice I have for most things: You just have to try some stuff. Don’t get paralyzed by the should I/could I, just do it. Everyone is doing it differently, find your way.